A ducted-fan propulsion system consists of a propeller or fan operating inside an enclosed duct system. Air is drawn in at one end of the duct, accelerated by the fan, and exhausted out the other end of the duct, producing thrust.

Ducted-fan installations come in two forms. The first, known as a shrouded propeller, features a propeller (or fan) surrounded by a relatively short-chord, cylindrical duct. (The chord of the duct is usually less than one propeller diameter.) Shrouded propellers have been tried in a variety of applications, and in a few cases have made it into production. 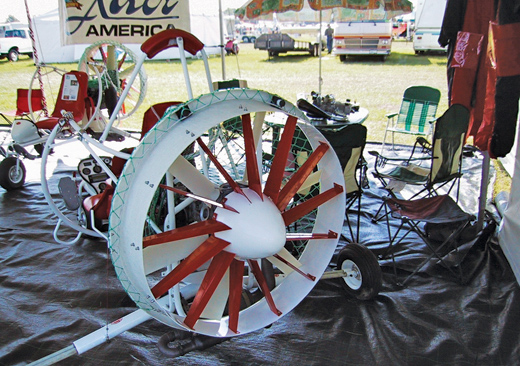 A ducted-fan powered parachute. A ducted fan is appropriate here because of the requirement for high thrust at low airspeed, along with the need to keep parachute risers out of the prop.

In the second form of ducted-fan installation, the fan is buried within the fuselage, with a flow path that looks like that of a jet fighter. There are relatively long inlet ducts leading to the fan and a similarly long exhaust duct. The only real purpose of this type of installation is to simulate a turbojet. It is common in the world of radio-controlled models, and a few homebuilders have built prototypes of “fake jet” airplanes with buried ducted-fan propulsion.

Attempts to use such a propulsion system on full-size airplanes have not met with much success. A few machines have flown, but their performance is significantly inferior to an airplane with the same power using an ordinary propeller. The combination of friction losses in the long ducts and the high disk loading of the fan hurt the inherent propulsive efficiency of the system to the point where it cannot compete with a simple propeller.

While the idea of a jet-like airplane seems appealing at first, few pilots are willing to accept a performance disadvantage simply because it looks like a jet.

Unlike the buried “fake jet” system, the short-duct shrouded propeller does have some aerodynamic advantages over a simple free-tip propeller. The ideal efficiency of a propeller increases as diameter increases and disk power loading decreases. This effect is more pronounced at low airspeeds. In order to achieve high thrust per unit horsepower while static or at low airspeed, a large-diameter propeller is required. While the same type of variation of thrust with diameter holds for shrouded propellers, the shroud reduces the diameter needed to get the same thrust.

According to ideal momentum theory, the combination of shroud and rotor of a ducted propeller generates more thrust per unit power than a simple propeller of the same diameter. The effect is most pronounced at zero airspeed, where the ideal ducted system produces 28% more static thrust than the simple propeller. For real-world systems, the static thrust increment can be even greater because the influence of the duct on the airflow helps the individual propeller blades operate more efficiently.

The duct in a ducted system generates a significant amount of thrust when operating statically or at low speed. As the propeller draws air in from the front, there is a large inflow angle; air approaching the propeller flows inward as well as aft. If the propeller is operating inside a shroud, the incoming air is turned aft by the leading edge of the duct. This flow takes the inward component of the momentum of the air and turns it into additional rearward momentum. As the flow turns, it generates low pressure on the leading edge of the duct, causing a net forward force on the duct.

Effect of Airspeed on Ducted-Fan Performance

The large thrust advantage of a shrouded propeller over a simple propeller at low airspeeds diminishes rapidly as airspeed increases. While the ideal thrust predicted by momentum theory shows some improvement due to the duct, it becomes quite small as speed increases. In real flow, the skin-friction drag of the duct opposes the thrust produced by the duct. As airspeed increases, the drag of the duct goes up and the ideal duct thrust goes down. At some point, the two are equal. At airspeeds above this point, the ducted system produces less net thrust than the simple propeller.

The airspeed for this crossover depends on the details of the duct and the power loading (or disk loading) of the system. Typical light airplane propeller disk loadings range from about 4 pounds per square foot to 8 pounds per square foot at full power. At such disk loadings, the ducted-propeller system produces more thrust than a simple propeller only up to an airspeed of about 120 to 130 knots. This assumes that the ducted system has the same diameter rotor as the simple propeller.

If the diameter of the ducted system is less than that of the propeller it replaces, the static thrust advantage decreases.

None of this analysis takes into account the weight of the duct or its supporting structure.

The design of a good, efficient shrouded-propeller system is complicated by several factors. At a low-airspeed, high-power condition, there is a large inflow angle in the oncoming air. To keep the airflow around the duct leading edge attached, it must be cambered to turn the flow aft, leading to a “bell mouth” inlet shape. At higher speeds, the inflow angle reduces dramatically. The airflow over the outer side of a bell-mouth inlet will separate, causing a large amount of drag. A good cruise-speed inlet shape looks more like a fan jet engine nacelle leading edge and has little camber. Unfortunately, a cruise-optimized duct inlet will have flow separation on the inner side at static and low-speed conditions, causing a large loss of thrust.

The design of the inlet lip of the duct must be a compromise between low-speed and higher-speed conditions. But this “best compromise” duct will not be as good as the best point-designed duct at either low or high speed. The designer must either sacrifice some of the static thrust advantage of the ducted system or accept some reduction in cruise performance (or a little of each).

One solution is to incorporate some form of variable geometry into the duct. An example is a ring leading-edge slat, which acts much like the leading-edge slats on short takeoff and landing (STOL) airplanes. At low speeds the ring slat moves forward, giving the duct a slotted leading edge and keeping the flow attached. At higher speeds the slat is retracted, giving the duct a good high-speed shape.

To make a ducted-fan system work well, the gap between the tips of the fan blades and the inner skin of the duct must be as small as possible. If the gap gets too large, much of the increase in thrust provided by the shroud is lost.

This makes it necessary to keep the mountings between the propeller shaft bearings and the duct extremely rigid. If the fan is attached directly to the crankshaft, the duct must be rigidly mounted to the engine. If shock mounting for vibration isolation is needed, the entire duct and engine assembly must be hung together on the soft mounting system.

As the population increases, the noise generated by airplanes becomes more and more of a community-relations and regulatory problem. Reduced airplane noise during surveillance and some types of police work is also desirable in making the aircraft less noticeable to those being observed.

A significant portion of propeller noise is generated by the blade tips and radiated in the plane of the propeller. Theoretically, shielding the tips with a duct can reduce or contain much of this noise. At least two attempts have been made to put this into practice on piston-engine airplanes.

In 1977, British company Dowty-Rotol flew an Islander with a pair of ducted propulsors driven by piston engines in nacelles slung under the wings replacing the conventional propellers and nacelles. It was claimed that the ducted system had 20% better performance at takeoff and about the same performance at cruise. Although the airplane was extensively demonstrated, the project never went beyond the initial demonstrator.

The Edgley Optica was a British observation airplane, designed by John Edgley, intended to replace helicopters for some police work. It was a twin-boom machine with a bulbous, helicopter-like glazed nose and a single engine driving a ducted fan at the back of the crew pod. The Optica was not a sparkling performer, but it was not intended to be fast. It did achieve certification and has been produced in small numbers by three different companies: Edgley Aircraft, Brooklands Aerospace and FLS Aerospace. The Optica certainly sounds different than a propeller-driven airplane. It produces a higher-frequency noise and lacks the sharp tones of a propeller at high rpm. At takeoff, it sounds like an enraged vacuum cleaner on steroids.

Fixed wing: Shrouded propellers have been tried on a variety of fixed-wing airplanes with indifferent results. In addition to the Optica and the Dowty-Rotol experiments, there was another interesting prototype, the Fanliner built by RFB in Germany. The Fanliner used the wings and tail of Grumman Cheetah, mated to a sleek fuselage incorporating a forward pod housing two crew members, and a ducted propeller at its aft end. The tail was carried on a cruciform boom extending aft from the duct. The Fanliner was initially powered by a Wankel engine, which delivered 150 horsepower. It is interesting to compare the Fanliner and the Cheetah. Both airplanes had about the same power and shared the same flying surfaces. The performance of the two was similar, except for one thing: The Cheetah carried four people, while the Fanliner could carry only two.

VTOL: Several relatively successful vertical takeoff and landing research airplanes used ducted propellers. VTOL is a good application for ducted fans because static thrust per unit power is vitally important for vertical takeoff and hover. The best of these was the Bell X-22. The X-22 had four ducted props at the tips of its canard and main wing. The ducted system worked well for two reasons. First, the static thrust advantage of ducted propellers made it possible to achieve good hover performance while keeping the diameter of the props down to where they could be oriented aft for conventional takeoffs and landings without hitting the ground. Second, the ducts formed part of the wing in horizontal flight and generated a significant proportion of the total lift. The four-duct X-22 configuration was considered for the missions that were eventually filled by the tilt-rotor V-22 Osprey. The tilt-rotor was chosen primarily because the downwash environment under the large-diameter rotors was more benign than the higher-velocity downwash generated by the fan system.

Airships: Ducted fans have been used successfully on several recent airships. Airship designers certainly do not have to concern themselves with anything high speed. The ducted system protects the ground crew from the blades, and the ability to use smaller-diameter propellers makes the installation easier. Tilting the ducts to vector thrust is used to aid takeoff and landing.

Hovercraft and ground-effect craft: Shrouded propellers are the propulsion system of choice for hovercraft and small WIG (wing in ground effect) vehicles. These craft operate at relatively low airspeeds. Because the propulsion system must be mounted above the hull of the vehicle, keeping the diameter down is highly desirable. Also, particularly for hovercraft, crew and ground personnel are often close to the fans while operating or loading and unloading the machine. All of these factors combine to make ducted propellers attractive, because the ducted system has advantages in most of these areas. An additional advantage is that the thrust produced by ducted props can be vectored by vanes in the duct exit to steer the aircraft.

How to Save 24 Pounds – and Look Great Doing It!