The propeller does more than provide thrust for flight. Propeller effects also impact the stability, control and trim of an airplane in a variety of ways. The designer must take these effects into account to provide satisfactory flying qualities, particularly on airplanes with high power-to-weight ratios or unconventional placement of the propeller.

When an airplane is in steady-state, level flight, all of the forces and moments acting about the center of gravity (CG) are balanced. Thrust equals drag, lift equals weight, and there is no net pitching or rolling moment on the airplane. To maintain this, a change in any force or moment acting on the airplane must be counteracted by an equal and opposite change of the other forces and moments.

The airplane should respond to a change in power or thrust in a benign and easily controllable manner. Ideally, it should maintain its trimmed airspeed if the power setting is changed. Increasing power should cause a climb at the same airspeed the airplane was trimmed at in level flight, without the need to re-trim. A power reduction should likewise cause a descent, but no change in airspeed.

Thrust-line effects tend to be particularly dramatic at low airspeeds and high power settings, such as those encountered during takeoff, climb and missed approaches. In these situations, the thrust is high, and the low airspeed reduces the effectiveness of the control surfaces. At cruise, the airspeed is higher and the thrust lower, so the aerodynamic forces, rather than the thrust forces, tend to dominate. Large or rapid throttle changes can produce transient trim changes, which can be troublesome if the thrust-line offset is large enough.

One class of airplanes that experiences this phenomenon is the single-engine amphibian, which typically has its engine pylon-mounted above the fuselage. The high-thrust-line pusher configuration is also popular for ultralights. On an airplane with this layout, increasing power causes a nose-down trim change, and reducing power will cause the airplane to nose up. This characteristic can be disconcerting, particularly near the ground. When power is reduced on final approach, the airplane will tend to nose up and lose airspeed. If allowed to continue unchecked, this situation can lead to an inadvertent stall. On a missed approach, the application of power to initiate the go-around will cause the airplane to nose down. If this occurs at low altitude, prompt pilot action is required to prevent an unwanted loss in altitude.

In both cases, some additional pilot skill and familiarity with this handling quirk are required, because the pilot must anticipate the trim change caused by a power change and compensate with elevator.

A high thrust line can also cause problems with nosewheel liftoff, since the nose-down moment produced by the propeller thrust opposes the elevator’s attempt to lift the nosewheel. On one WW-II-era Experimental airplane, the Miles M.35, this situation was so extreme that the nosewheel could not be lifted at all at full power. The M.35 was a tandem-winged pusher with a high thrust line. With no slipstream over the elevators, the elevator power available during the takeoff roll was limited, and the airplane refused to rotate with power on. Eventually, the pilot discovered that it was possible to take off by accelerating to near liftoff speed and cutting the throttle, which allowed the elevators to lift the nose. Full power was then re-applied for takeoff. While this may have been acceptable for an Experimental airplane, it is hardly an acceptable procedure for normal operations.

One particularly nasty behavior exhibited by the M.35 was that a sudden power reduction while the airplane was moving fast on the runway could cause it to rotate and lift off unexpectedly. This could bite an unwary pilot during high-speed taxi tests or a first takeoff attempt. One well-known homebuilt of the early ’60s (the Dean Delt-Air 250) had a fatal accident during a first-flight attempt, partly caused by this phenomenon. The airplane reached a very high speed on the runway, but refused to rotate. The pilot radioed that he was aborting the attempt and pulled the throttle. The airplane responded by rotating abruptly and lifting off into an extremely nose-high attitude, which led to loss of control. On earlier taxi tests, the pilot had been able to lift the nosewheel at speeds below liftoff speed. The critical difference between the high-speed taxi tests and the takeoff attempt was throttle setting. During the taxi tests, the engine was at well below full power during nosewheel liftoff. The takeoff attempt was the first time nosewheel liftoff was attempted at full power. 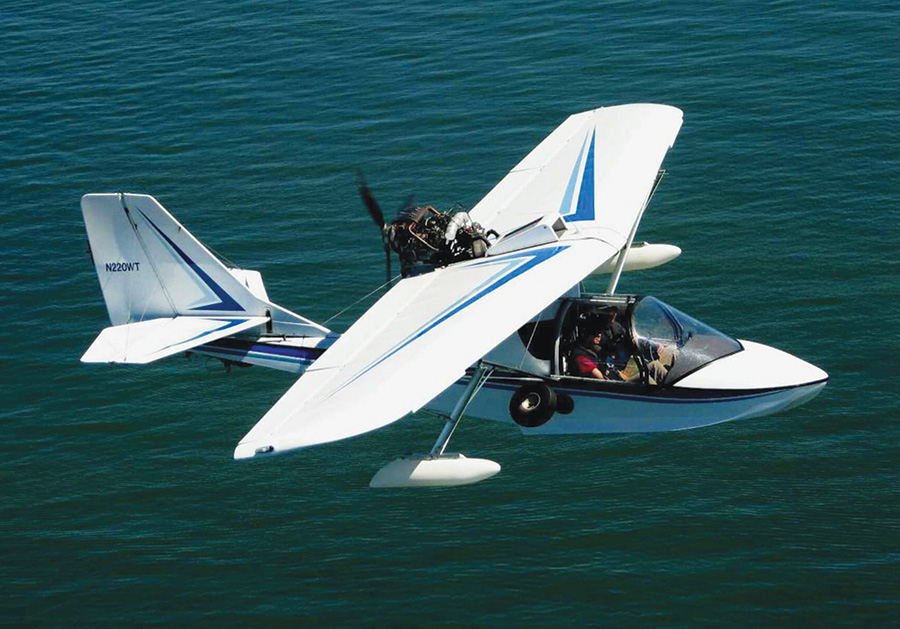 Other high-thrust-line airplanes have had similar problems, albeit with less drastic consequences. This problem typically shows up on pusher airplanes and other types that have no propeller slipstream over the elevators to aid in nosewheel liftoff.

One of the major challenges for the designer of a high-thrust-line airplane is to keep the trim change with power down to a manageable level and give the airplane acceptable rotation and liftoff characteristics. There are a number of ways to do this, including using the interaction between the propeller slipstream and the tail to help provide automatic compensation, inclining the thrust line and adjusting landing-gear geometry to improve liftoff. By applying a suitable combination of these approaches, a high-thrust-line configuration can be made to have acceptable flying qualities.

Airplanes with problems caused by very low thrust lines are rarer than with high-thrust-line machines, but a few have appeared. One example was the Messerschmitt M-262, which had its engines in under-wing nacelles and, in prototype form, a tail-dragging landing gear. The combination of low thrust line and no propwash over the tail made it impossible to raise the tail with the elevator alone during the takeoff roll. Test pilots developed the technique of applying the brakes sharply during the roll to bring the tail up. The problem was solved in the operational version of the airplane by changing to a tricycle landing gear.

Thrust-line effects are not confined to the pitch axis. An example of how thrust-line offset can affect lateral/directional characteristics is the behavior of a twin with a failed engine. The thrust line of the operating engine is offset laterally from the CG, causing a large yawing moment. A large side force from the vertical fin and rudder is required to trim this moment and maintain directional control. As airspeed falls, the ability of the fin and rudder to trim the thrust-induced yawing moment is reduced until, at some speed, it requires full rudder to keep the airplane from yawing into the dead engine. This speed is the Vmc or minimum-control speed so familiar to multi-engine pilots.

Yawing the thrust line can help compensate for torque and/or P-factor, reducing the rudder required to keep the ball centered in a climb. For example, the Ercoupe, which does not have separate rudder control, has a thrust line that is offset to the right. It also has significant downward inclination of the thrust line so that at high power settings, the elevators, which have limited travel to make the airplane “stall proof,” are prevented from being able to stall the airplane in spite of the increased elevator power provided by the slipstream over the horizontal tail.

The effects of thrust-line direction are complicated by the interaction of the propeller slipstream and the flying surfaces of the airplane. Changing the direction of the slipstream can change the angle of attack of the tail surfaces and produce large moments. This can be a problem, but it can also be exploited to tune the airplane’s response to power changes.

Vertical adjustment of the thrust line to tailor flying qualities is a substantial undertaking with serious configuration-integration implications and is rarely used. The only exception is where the initial configuration has a large vertical-thrust-line offset and proves to have unacceptable flying qualities as a result. If all other attempts to fix it fail, moving the vertical position of the thrust line closer to the CG may be tried as a last resort.