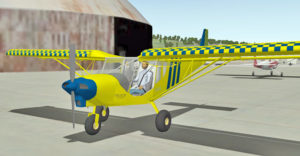 The STOL CH 750 is an all-metal, high-wing, two-seat kit aircraft designed by Chris Heintz and manufactured by Zenith Aircraft Company in Mexico, Missouri.  It is available as either a kit project or as blueprints for plans builders, and meets the definition of a Light Sport Aircraft (LSA), making it eligible for operation by Sport Pilots. The basic aircraft is powered by a 100-hp Continental O-200 engine (although other engine options exist, up to 140 hp).

The current X-Plane files for the STOL CH 750 are the first edition (version 1.0).  Planned additional features will include new virtual engine installations to reflect real-life engine choices, including the ULPower, Jabiru and Rotax 912S engines, so that builders can test-fly their airframes with the different powerplants. 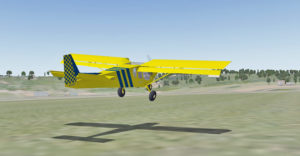 Sadly, the airplane used as the model for this X-Plane simulation is the same one that was flipped over and destroyed at this year’s Sun ‘n Fun show, so this is now the only way to fly that particular airplane.

To download the simulation, visit http://documents.zenith.aero/stol-ch-750-x-plane-flight-simulator-files.html. For more on Zenith, visit www.zenithair.com/stolch750. The X-Plane site can be found at www.x-plane.com.