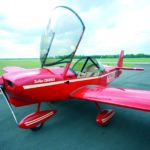 A five-person FAA National Kit Evaluation Team (NKET) recently concluded a two day visit to Zenith Aircraft Company in Mexico, Missouri, and determined that the Zodiac CH650 Light Sport kit will meet the FAA’s 51% rule that qualifies it as a kit. The FAA Production and Airworthiness Division (AIR-200) will have the Zenith kit added to the List of Amateur-Built Aircraft Kits located on the FAA website.

According to Zenith president Sebastien Heintz, “While we never doubted that the CH 650 kit meets the intent of the major portion [51% rule] requirement, it’s useful to have it officially recognized as such. We provide a significantly higher level of completion with the CH 650 kit compared to many kits on the market.”

According to the company, the CH 650 is a second generation light sport aircraft, developed specifically for Sport Pilots. This model offers a larger cabin area with more width and head room, improved ventilation and visibility, and a new canopy latch system. The company offers both complete kits and “buy-as-you-build” component kits, as well as blueprints.