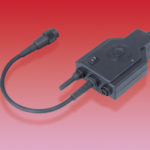 Lynx Avionics has announced a new Bluetooth audio adapter for use with its Micro System headsets, which includes a built-in Bluetooth telephone and music interface. The adapter is designed specifically for use in open-cockpit aircraft, and features a waterproof enclosure and a large multi-function control button that can be used when wearing gloves. The adapter has a built-in belt clip and may be mounted permanently using Velcro, screws, tube clips or cable tie saddles.The new adapter is powered from the headsets, or from a radio/power interface, and provides Bluetooth wireless connections for up to eight devices. Paired with a telephone, all of the main handsfree functions can be controlled from the adapter including voice dialing, call transfer, call reject and last number redial. To further simplify use in an aircraft, the adapter will automatically answer telephone calls after four rings.

When used with music players, functions can be controlled using the adapter’s multi-function button. The adapter also provides two separate hard-wired connections for external audio devices. As a safety feature, all incoming audio connections can be isolated at any time using an audio mute switch.