Home Newsline Kneeboard Notes ADS-B IN and The Traffic Question

The proliferation of ADS-B IN portable products at this year’s EAA AirVenture air show leaves this writer with a couple of vexing questions. When surveying the purveyors of these new and generally very affordable products, I noticed that they advertise the ability to receive FIS-B (flight information services), notably METAR weather, TAF forecasts and Nexrad imagery. Some of them also advertise that the devices can receive traffic information from other ADS-B OUT equipped aircraft.

I fly an ADS-B IN/OUT equipped aircraft (a permanently mounted solution) and I was curious. I know that for me to see the entire traffic picture (the same one the air traffic controllers see on their scopes) my ADS-B has to send a signal out and “ping” the nearest ADS-B station. This happens fast, and the station replies, sending me that picture of where other transponder-equipped aircraft and ADS-B equipped aircraft are, relative to my position in the air. I’ve flown with it all around the country, and it works well everywhere except eastern Montana, Wyoming, the Dakotas, Nebraska, Idaho and parts of Iowa. That’ll change as stations go live, but as of this writing, that’s how it is. 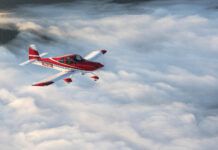 Larry Anglisano - April 29, 2022
2
There are plenty of display options at all price points.