The Aircraft Electronics Association commented recently on a Notice of Proposed Rulemaking (NPRM) regarding ADS-B, or Automatic Dependent Surveillance-Broadcast technology. (ADS-B employs Mode S transponders and universal access transceivers to manage datalink-equipped aircraft, potentially improving use of airspace and overall safety.) While the AEA supports the requirement to adopt ADS-B, it does not support the FAA’s proposed regulation, because the proposal doesn’t include the total cost of Next Gen requirements, will cause the industry an excessive financial burden and will compromise safety claims. Further, AEA members will be unable to manufacture, install or service equipment with assurance that it will be viable for the duration of the equipment’s life, AEA says.

What’s worrisome in the NPRM, according to AEA, is the FAA’s “Vision of the Future,” which defines the Next Gen system as one that is “flexible enough to accommodate safely whatever number, type and mix of aircraft there will be in the U.S. skies by 2025.” Described as an “aircraft-centric system with performance-based requirements,” the future system will detail performance for communication, navigation and surveillance (CNS). The problem with that, as the AEA sees it, is that the ADS-B proposal is only the first element in broad changes to the CNS requirements for flying in U.S. airspace. AEA says that it is inappropriate for the FAA to propose sweeping changes, and then perform an economic analysis on only one element of a complete revamping of CNS requirements for Next Gen systems.

Furthermore, AEA says the FAA is estimating the cost of equipment and installation for equipment that does not yet exist. For example, the FAA estimates that it will take one week for each installation of new equipment in GA light aircraft. With roughly 800 certified repair stations to work on about 160,000 light aircraft, each station could process an estimated 50 aircraft per year, or about 40,000 aircraft total per year, which would mean four years of constant production just to meet the implementation deadline. However, the TSO’d equipment doesn’t exist today, and installations cannot begin until it does, which could take five years or more. With an FAA deadline of January 1, 2020, 12 years hence, that would leave only seven years to equip the entire fleet.

AEA advocates adopting a proposal that uses existing avionics as much as possible rather than requiring wholesale replacement of equipment. The FAA proposal, AEA says, does not build upon the investment of thousands of owners of first generation ADS-B equipment. The proposed requirements make that equipment obsolete, says AEA. 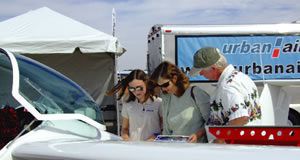