George Stuart of Owensboro, Kentucky, flies a Grumman Cheetah out of KY8. He writes that an aftermarket power supply on his new store-bought Stratus 2 ADS-B Receiver for iPad was killing some of his com receive frequencies. Disconnect the aftermarket power supply, and bingo, the com was perfect. Come to investigate, he found that the little 12-volt aircraft supply to 5-volt Stratus power supply was a switching type power supply, and lots of folks on the message boards were having the same problems. Seems that the inexpensive offshore (not his words, but this is a family magazine) switching power supply had no shielding nor a filtering mechanism of any sort for VHF noise on the input/output lines.

George, being a retired electronic engineer, did what any self-respecting engineer would have done; he said, “I can do better.” And he did.

Here’s the deal: A switching supply operates a whole bunch like a spark plug. It creates a very sharp waveform that has noise components way up into the gigahertz range where the nav, com, transponder, DME and GPS reside. While the switching supply creates very little waste energy in the form of heat, its wasted energy is given up as noise.

So George, being one of the cognoscenti of the electron game, ginned up a little linear regulator that is noise free. Since this was a one-shot device, George made his regulator into a 5-volt regulator that provided enough current to run his Stratus.

Fortunately/unfortunately for us, linear regulators have little, if any, noise. All their wasted energy is given up in the form of heat and are nowhere near as efficient as a switching regulator. As they say, all aircraft are just a bunch of compromises flying in loose formation.

Let’s just say a few words about this problem. Where we have a very limited amount of power available to us—think cell phone battery—we will toss away a little noise for the benefit of absolute efficiency. Where we have a lot of power available to us, we can sacrifice a little efficiency and get clean, pure power. In the case of an aircraft where we have lots of devices running very microscopic power levels (com radios, nav radios, GPS, etc.) and an alternator that can supply hundreds of watts of power, my option is to use linear regulators where I can and only use well-shielded switching supplies where I absolutely have to. 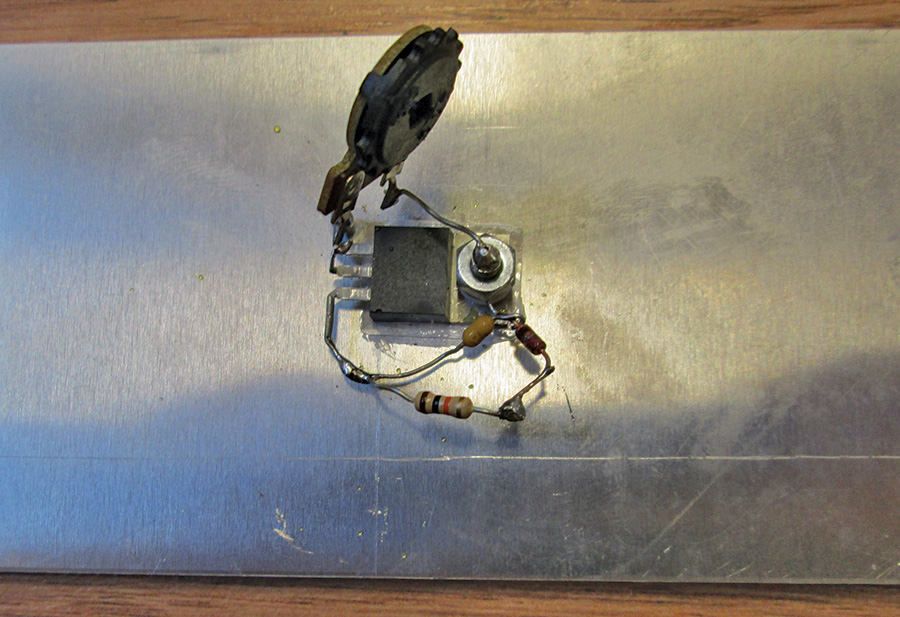 The IC (center) is insulated from the heat sink (aluminum sheet) by a thin mica washer and thermal grease.

Let’s dispel another misconception right now. I’m going to give you the design for a 5-amp regulator. I got quite a few comments like, “This is too much current; you are going to burn up my gimcrack.” I guess the better way of saying it is that I’m going to give you a regulator that will supply up to 5 amps. If your gimcrack only needs half an amp, the regulator will only give it half an amp. A regulator of this kind regulates voltage, not current. It will only supply enough current at the correct voltage to run the gimcrack. Sort of like your 60-amp alternator. It doesn’t force 60 amps through your 1-amp radio, but can supply a total of 60 amps for all your needs if necessary.

Let’s also pick a regulator device to use. I’m very fond of the LM338 series of regulators for several reasons. One is that it is made by a dozen manufacturers, any one of which can go away tomorrow and that leaves lots more inventory. Two is that the device is nearly bulletproof in that you can throw a handful of aluminum shavings on it while it is working, and it will simply shut down until you brush the aluminum away. You can run it hot enough to boil water, and all it will do again is shut down until things cool off. Finally, it is what I call a 6V6 part. For those of you born after the era of vacuum tubes, the 6V6 was one of the best vacuum tubes to come out of the 1930s. Here, 85 years later, the 6V6 is still in production, and you can get as many as you want to fix your WW-II-era Philco wooden cabinet antique. So be it also with the LM338. Your children’s children should be able to get them for their grandkids.

You can use this same basic circuit for 1 amp, 3 amp, and 5 amp IC regulators.

Let me now show you a bit of simplistic engineering for the thermal (heat) part of this problem. Remember I said that linear regulators get rid of their excess power in the form of heat? OK, so let’s take the case of the iPad that wants 2.1 amps to run at 5 volts. Let’s also take a worst case of 14.1 volts on the battery bus. That leaves the regulator to get rid of 9.1 volts (14.1 – 5 = 9.1) at 2.1 amps, or 19.1 watts of power. That’s a pretty fair chunk of power. The neat part about heat is that it works just like resistors. There is a thermal resistance between the little pinhead chip that is doing all the work to the metal tab of the IC package. There is a thermal resistance between the IC package and the “heat sink.” And finally, there is a thermal resistance between the heat sink and the ambient air. All these resistances add temperature to the part before it. Now, I apologize for using the metric system in an American design, but that’s the way the parts are specified.

The thermal resistance between the chip and the metal mounting tab on the case (in formal mumbo-jumbo Θj-c) is 1C/watt, so in our case, whatever temperature we can keep the little metal tab at, the chip will be 19.1 C warmer. Since the absolute maximum chip temperature is 125 C, our margin is now down to 105.9 C. Since the tab of the case is electrically connected to the chip, we’ve got to insulate the case from the heat sink. This is commonly done with a “transistor mounting kit” consisting of a very thin mica insulating washer, nut, bolt, and insulating shoulder washer. The thermal resistance of this combination is about 0.1 C/watt, so now we’ve got another 1.91 C to worry about. The margin is now 104 C. The good news is that we’ve accounted for all the known losses. The bad news is that now you have become the experimental engineer. I can’t tell you what your “heat sink” is going to look like nor how you can best get rid of the heat. I can tell you that if you don’t get your heat sink down below the boiling point of water (i.e. “spit-sizzle hot”) the IC will do its little on-off dance until you take care of the problem. Using a metal case for this power supply? Good sink. Using it out near the wingtip? Last metal rib works a charm. Use metal wherever you can find it.

So, how do you measure the temperature of the heat sink? Aha, grasshopper. You use the solder-lug-diode thermometer I designed for you in the October ’06 KITPLANES column. What? You don’t have ten years of back issues? Shame, shame. Actually, I’m working on that problem. Use whatever contact thermometer you have. I tried the “infrared non-contact” type of thermometer and the readings were absolutely worthless.

OK, just a few comments and you are off and running.

• The Zener diode (D1) is only there on the off chance that the IC self-destructs in the shorted mode. You don’t want to ruin hundreds of dollars of equipment for a failed five-dollar part. The Zener diode will blow the fuse before letting the holy smoke out of your equipment. Pick a Zener voltage about 0.5 to 1.0 volts above your output voltage, set your output voltage accurately, and then solder the Zener in. Don’t forget to fuse the circuit.

• Like we said back in March, use a very thin layer of thermal grease between the IC metal tab and the mica washer, and between the washer and the heat sink. You can use zinc oxide from the drugstore if you wish.

• The variable resistor to set the output voltage (and also provide a minimum load for the regulator) is set for the voltage you want and then the Zener diode is installed. Use a 100-ohm trimmer resistor up to 5 volts and a 500-ohm trimmer above that. After you set your output voltage, use a small dab of RTV or other silicone caulk to hold the adjustment wheel in place. Vibration in an aircraft will tend to move this adjustment around otherwise.

One more column in a future issue on regulated voltages, this time for both the LED nav lights and the LED landing light, and we will move on to other subjects. Until then, stay tuned.