This may well be the most ambitious project I’ve tackled in the last 35 years of writing my KITPLANES® columns. I’m going to unplug my own hangar from the commercial power grid and run it completely from solar power. No cheating with gas generators. (I think using the gas generator once in a blue moon as a backup isn’t a bad thing after a month of stormy weather, but only to run an external charger for the primary battery supply. It’s not to be used for normal operation—except perhaps for the annual compression leak-down test.)

I’m thinking this project will probably be a column every other month for the next six months (three columns). I will do it all from parts available to you from the usual suspects: Harbor Freight, Mouser, DigiKey and other folks who will sell you parts and pieces in onesie-twosies. Probably some stuff from offshore that you can source from Amazon and the like.

When starting a project like this, it is good to sit back and contemplate the design, rather than going off on a tangent trying this and that and cobbling the system together. So, given that we all have pretty well the same requirements, let’s enumerate the things we need to run from our solar system.

Given all these wants and wishes, there has to be some sorting out of what we will need to make this system work. You’ll also need to decide whether you want this system to work 24/7/365, twice a week, twice a month or some other combination.

It is also true that solar panels do not deliver constant voltage or current. The voltage and current they deliver is totally dependent on how much sunlight falls on the panel, the temperature and the cloud cover. So, it is dependent on the engineer to design a 12-volt battery charger that takes a wildly varying amount of wattage (volts x amps) that the solar panel delivers and converts this power efficiently into volts and amps that the battery can store. In general we call this a constant-power circuit.

It is also true that solar panels need to be “adjusted” four times a year for optimum power (see “Sunshine Comes Softly Through My Solar Panel Today,” February 2008). I’m not quite sure right now how to do that, but I have the feeling that I’ll know pretty well when this project is all over.

Would it also be a good idea to back up our solar power source with a wind generator? Most airports I’ve been to have a goodly amount of wind since they are often in flat, unprotected areas. What would that generator look like? And can we make it from tin cans, chewing gum and baling wire or by using a 12-volt computer cooling fan as the power source?

Is it possible to use the same charging control circuit for the small 1.5-watt solar panel and the large 25-watt panel? I think so, but that is just more research.

By Oshkosh of this year, I ought to be able to make the traditional Monday morning of the first-week forum session a real report on the entire system, solar cells to inverters. I hope to see you all there.

Along the way I may just delve a month or two into other interesting things like a cheap and dirty audio panel for less than $25 and stuff like that. Hang on—it’s going to be an interesting ride. 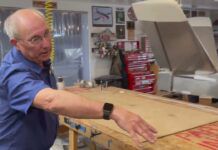 In Search of the Perfect Landing