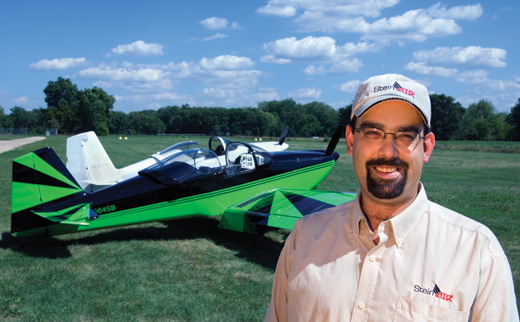 The line between aviation-specific GPSes and personal portable devices has blurred. Now there are many tablets and phones that are almost GPSes—they can do as much or more than the aviation-specific navigators of just a few years ago—but we’re going to take a look at the devices that are 100% aviation specific.

Although tablets are fantastic for storing documents such as approach plates, charts and manuals, I consider them complementary to the purpose-built, portable aviation GPSes, not a replacement for them. One area in which the dedicated aviation units excel is in screen readability in sunlight. Even some of the newest consumer tablets are difficult to read in direct sunlight, but many of the aviation units have been developed for just this purpose; no one cares if they work well in an office or airport terminal. 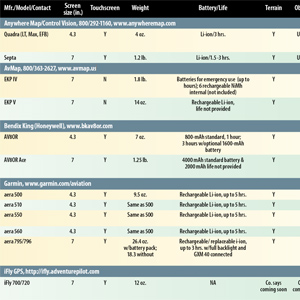 While some of the units we have reviewed previously remain available, new ones are raising the bar for features and functionality.

Control Vision is the company behind the Anywhere Map line of products. I say products because the company sells both hardware and software. Besides Garmin, Anywhere Map is the only company

discussed here that offers an app (software application) for modern tablet devices. The company’s software has undergone many years of refinement, and it’s quite nice to use. The program can be installed on a whole host of products, from small handheld devices to laptop computers. Software and apps range in price from $79 to $199. Users report the software to be capable, bug free and highly functional. At this point, the tablet app is still new, but the company expects frequent and additional upgrades to the product, so by the time you read this, it should be as fully functional as the company’s other software.

The hardware offered by Control Vision is primarily the 4.3-inch Quadra (starts at $399) and the 7-inch Septa (starts at $995) systems; an external XM Weather module is an additional $795. Both have received positive reviews from users, who report the screen clarity to be good and readable in sunlight. The company is a pleasure to deal with, and its data-package pricing is lower than most. One Achilles’ heel of the Anywhere Map products has been the inability of the systems to provide an interface capable of communicating with various autopilots and other aircraft systems that many builders are now installing, which is a deal breaker for some.

AvMap has been producing portable GPSes for some time. The most current offering, the 7-inch AvMap EKP V, starts at $1998; the EKP IV starts at $1399, and both offer the external XM Weather module for an additional $450. My experience has been that the units are well made, the display is very readable in the sunlight, and the controls are nicely placed with a good tactile feel. The EKP V is thin and fairly lightweight, but it’s not as easy to panel mount (even with an AirGizmos mount) as some other units. These devices interface nicely with components such as an autopilot, and you can often find them on sale. Battery life has proved to be very good at about 4 hours. 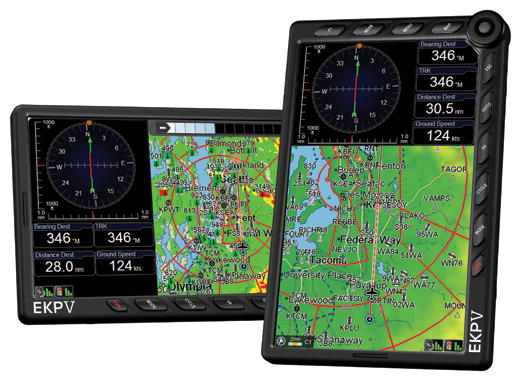 Honeywell made a splash a couple of years ago when it introduced its AV8OR line of touchscreen GPSes. They were the first major manufacturer to market this technology, so it was noteworthy. These GPSes are available in a 4.3-inch size, with a starting price of $599, or a larger 7-inch size (AV8OR ACE), with a starting price of $999. Both screens are very crisp but will slightly wash out in direct sunlight. One common complaint is the battery life with the included 800-mAh battery, which customers say provides about an hour of operation unless plugged into an external power source. A 1600-mAh battery is also available; the company says it will provide about 3 hours of operation at full luminance. 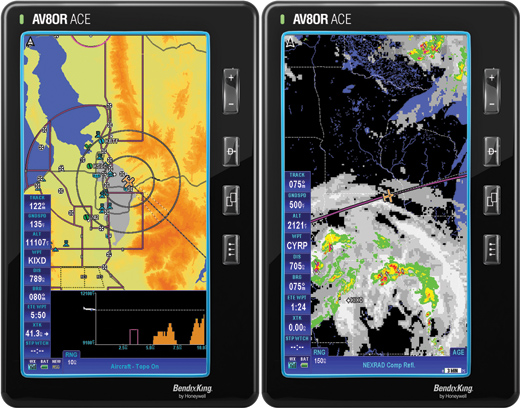 The AV8OR offers a host of interface options, such as an external XM Weather module, traffic devices and a media player; it also can download various documents. You can add optional street navigation functionality for use while driving.

We’ve found both units to be lightweight and easy to handle, and the functionality is competitive with others in the market, with included IFR charts, a weight-and-balance program and an external SD-card slot for moving files around. Overall, we find the AV8OR units to be good midrange devices, and they can be connected to various external devices, such as many autopilots, via an RS-232 serial cable.

Garmin is still the leader in portable aviation GPSes. The term “portable” is used somewhat loosely, because you’ll see various Garmin units mounted in panel docks, such as those available from AirGizmos. 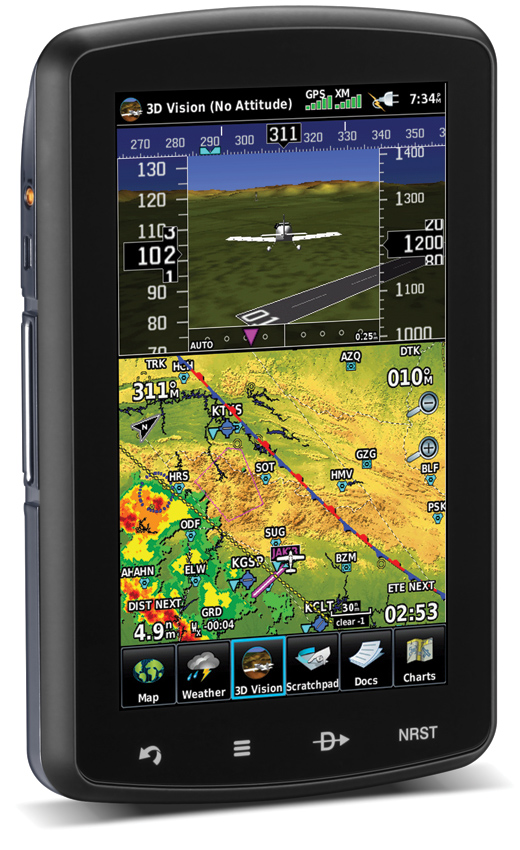 In the past year, the popular 296/396/496 series was discontinued, and the new aera 796 was introduced. With a retail price of $2499 ($2199 without XM Weather and music), the 7-inch touchscreen display brings some new functionality to the cockpit. The unit can be displayed in either portrait (vertical) or landscape (horizontal) mode. The screen itself is sunlight readable and nice to use, being of the same type as the new GTN boxes. The menu system is intuitive and simple to use, and those familiar with some tablet devices will appreciate the “pinch zoom” motions you can now use to manipulate the map display. New in the 796 is Garmin’s 3D synthetic vision display, which depicts the terrain in “real-life” projections on the screen. A new display page that mimics the look of an EFIS screen shows GPS altitude and groundspeed as well as heading information overlaid on the terrain map, with a small airplane depicted in the center.

The 796 also includes a full set of geo-referenced VFR and IFR charts along with approach plates and airport diagrams, meaning this unit fulfills the role of a Class I or Class II EFB (electronic flight bag). The battery lasts more than 3 hours, and the unit interfaces with other devices such as a mode S GPS, providing an unparalleled amount of information in a portable GPS. The 796 has proved to be a popular unit, and its external XM antenna is smaller than in its predecessors. Garmin has also simplified the connection to the units, requiring only one cable for data, audio, interfaces, power and ground in a “fast connect” device. One great feature is a built-in document reader that allows a user to download various documents, pictures or PDF files, and then store and view them on the unit.

Garmin’s GPSMAP 696 also remains popular due to its rectangular shape and overall ease of mounting. The 696 is available with or without XM, but it is not a touchscreen like the rest of the Garmin portable product line. Some users prefer the joystick for panning on the map page. While the 696 doesn’t have synthetic vision like its newer sibling, it retains a full terrain and obstacle database as well as the same geo-referenced charts, approach plates, airport diagrams and “safe-taxi” functions as the other devices. The battery life is about 2+ hours, depending on screen brightness, and pricing is $1999, or $1699 without XM Weather. 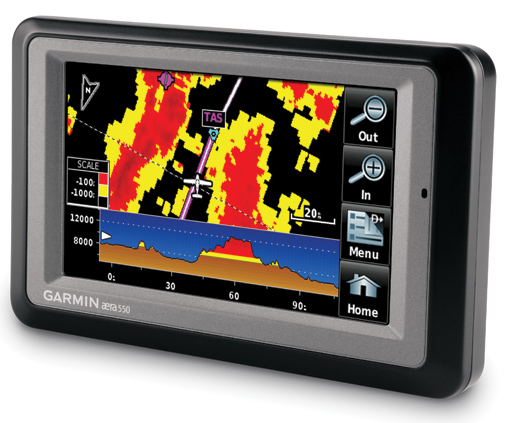 The aera 500 series from Garmin marked the company’s entry into the touchscreen portable GPS market. The 4.3-inch display is somewhat less sunlight readable than other non-touchscreen versions from Garmin, but it’s still superior to many tablet or compact consumer devices. The GPS is available in four different versions (500, 510, 550 and 560), which can include XM Weather and music, and which offer additional levels of functionality on the higher-end units. The aera 500 series is adaptable for automotive use too: The unit is lightweight, slim, compact and includes a built-in speaker. The battery lasts up to 5 hours. Prices range from $699 for the basic aera 500 to $1599 for the top-of-the-line, XM-capable aera 560. All of the Garmin units can interface to most external autopilots and other devices. 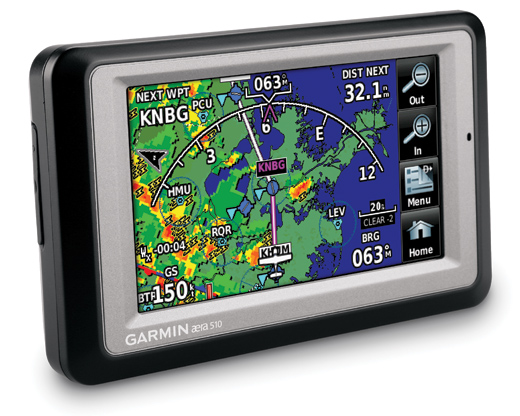 Relatively new and less well known in the aviation community is the iFly GPS. It is available in two models, the 700 and 720 ($549 and $749, respectively), both with 7-inch screens. While somewhat limited in functionality compared to others in the marketplace, we found the units to be good for the price. Some may have reservations about buying a “portable” GPS that requires an external battery or a hardwire to a power outlet, but others won’t mind. Where iFly seems to really shine is in the price of its databases and updates, which are significantly less expensive than the competition’s. Our experience has been with the 700, a decently priced midrange GPS in an attractive package, produced by a company that seems to be serious about competing in this market by providing a lower-cost, yet nicely featured, portable in a large-display format. At the moment, iFly does not offer the ability for the GPS to interface via serial communication to any external autopilots or other devices in the aircraft. 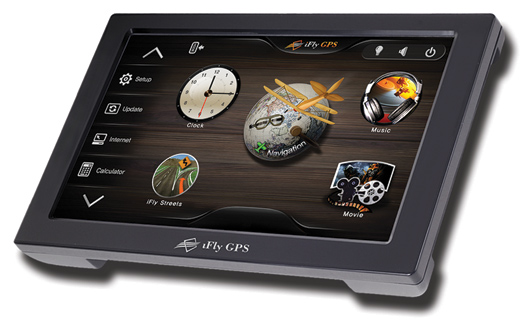 What Does the Future Hold?

With the introduction of even more tablets on the horizon, it’s quite possible that the aviation-specific, portable GPS market will contract to only a few key players. Even Garmin now offers an app for tablet computers, but the company still sees a way for these two types of devices to coexist. I own a tablet and a portable GPS, and each has its strengths; I don’t foresee the dedicated portable units completely disappearing, but I do expect to see the line between them and tablets continue to blur. There will still be room for attractively priced units, and companies currently offering both high- and low-end options will probably continue to do so for some time to come.

Mary Bernard - October 18, 2012
0
Here’s a look at the newest designs and how the kit aircraft segment of Experimental aviation has changed over the past year. By Mary Bernard and Suzanne B. Bopp.