We’ve all had this experience. We hear another pilot transmit and immediately have to turn down the volume due to a horrendous transmission of squeals, pops, whoops and static from another airplane in the pattern. Sometimes that noise comes from your own stack, rendering your intercom flaky and your autopilot twitchy. Much of this can be traced back to one exceedingly important part of your electrical system, the ground. 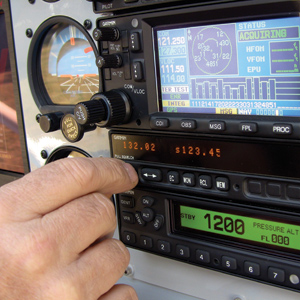 It doesn’t matter whether you call it earth, low, negative, return or, as most of us do, simply ground, this leg of the electrical system is without question the most critical, and it’s the most often improperly fabricated. Bad grounding is responsible for noise in the system and can lead to erroneous instrument indications, unstable network connections, flaky (appearing) autopilots, charging-system issues and many more maladies.

We’re going to explore that somewhat nebulous but strangely easy concept of grounds in your electrical system. There will be electrical engineers who read this article and will no doubt chastise me for the simple generalization on this topic, but to discuss it in detail could literally fill dozens, hundreds, of pages. Instead, we’ll focus on the issues I see most often perpetrated by homebuilders but also, sometimes, by shops that should know better.

Let’s first start by the oversimplification of the typical sport aircraft electrical system. For the purpose of this discussion we’re going to focus only on the DC (direct current) systems typically found in our homebuilt and sport aircraft. There are many varieties of electrical systems and design, but our aircraft are mainly driven by a DC voltage type battery, alternator, generator or a combination of these.

In the simplest of terms, each electrical device in your aircraft requires a path of electrons to power it. The quantity and flow (voltage and amperage) of electrons for these devices may vary, but the principle is still the same. As masters of our electrical system, our goal is to direct the flow of these electrons from one point through a device and ultimately back to another point. A basic example would be from the positive terminal on a battery, through a device (like a light bulb) and back to the negative or “ground” terminal of the battery.

An easy way to think of electrons and wiring is to picture water flowing through hoses. We vary the amount of water and the size of the hose to drive things, and we need to make sure each hose does what we intend without any leaks or mixing with other hoses. 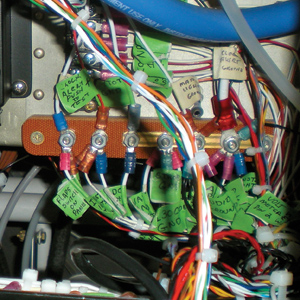 Mating circuits at terminal strips works fine as long as the crimp connectors are properly fitted. Labeling is a huge help.

To accomplish our task of directing electrons where we want and need them to go, we use a variety of devices with insulated wire or cable being the main pieces of hardware. Because many of the devices we use in our aircraft are not just simple light bulbs, but may include transmitters, receivers, GPSes, motors, sensors and a plethora of other devices, we have to make very sure we get each system to work as it should without causing undesirable effects on other systems.

Don’t Get Short With Me

To understand what can go wrong, we need to discuss a couple of simple things that can and do go wrong, and that may cause problems with our electrical system. The first of these is called a short (or short circuit). Because we normally control the flow of electrons via wires through certain devices, we have a complete circuit where both the flow and quantity of electrons are controlled. 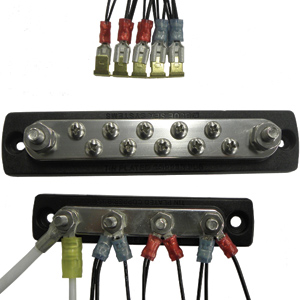 Commercially available grounding and power strips-these are made for the marine market-can simplify grounding.

If this circuit is disturbed and electrons are allowed to flow back to ground without any control, we have a short where our control of the electrons is removed and they are freely allowed to flow. Typically this results in a melted wire, fire, smoke, popped breaker or other similarly, er, “negative” result. The causes of a short can be many, but the most typical is allowing a wire to touch ground prior to it going through some sort of resistive device; an example would be putting a wrench between the + and – terminals on a battery. Don’t do this!

It is imperative when wiring to make sure the entire loop of each device or system is installed correctly so there are no short circuits, and the electrons must follow the path you intend all the way from their originating point through your device and safely to ground. To protect the wiring that funnels the electrons where we want them to go, we install devices in each circuit such as fuses, circuit breakers or other pieces of hardware that will open the circuit and stop the flow of electrons in the case of a short. 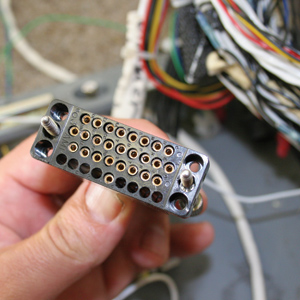 One grounding option is to use a multi-pin connector such as this to bring all avionics grounds to one place. A plate with the matching male pins is grounded to the aircraft chassis and ties all the ground pins together.

Along with accomplishing the task of routing electrons safely through the devices we use on our aircraft, we also need to ensure the route taken is the path we intended. The very nature of electrons is to follow the path of least resistance, and if given the opportunity, they will travel in a different route than we intended. If we leave multiple paths for electrons to follow from a single device, we can end up with what is called a ground loop. The oversimplified definition of a ground loop is when there are multiple return paths for electrons to flow through a piece of equipment. If multiple devices are driven by a single common source like a battery and have multiple paths for the electrons to return, this can cause a ground loop.

To prevent ground loops, we commonly use a central ground point on our aircraft. This ensures the path of electrons all go back to a single point for each device in our aircraft. Without a central ground, the alternative is called local grounding. This may seem like a good idea, and indeed it will work if we have a local ground that is metal and allows the electrons to flow back to the desired point. The problem arises when those little buggers do something different. While we may “think” a certain path is what would occur, frequently electrons may travel a different route-sometimes back through other devices, other wires or parts of the airframe where we don’t want electrons to be; in some cases, they take multiple paths at once (as described earlier). If these electrons decide to travel through wires that are in our audio system, they can cause a tremendous amount of interference that we don’t want (such as the noise we might hear in radio transmissions). This is mainly why we put a central ground point in aircraft, even if they are metal aircraft. 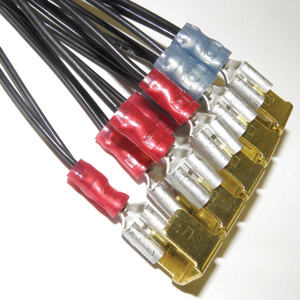 While it is a good practice to run each device back to a central ground point, it’s not always needed. Something like simple wingtip lights can easily be grounded to a metal wing (assuming a good ground connection back to the airframe ground and battery). If you are unsure whether things can safely be grounded locally, err on the side of caution and run a return or ground line back to the central grounding point.

Lastly, I would be remiss if I didn’t discuss the topic of interference in the same article as grounding. This subject on its own could also cover many volumes, so let’s try to keep it simple. In aircraft we are generally concerned about the type of interference called EMI or RFI, which stand for electromagnetic interference and radio frequency interference. Basically, EMI/RFI in aircraft happens when an electrical circuit in our planes is affected by induction or radiation from a transmitting device such as a radio or transponder. It can also be caused by items such as motors (alternator, flap, gear, servos, etc.) where our electrical wiring can unintentionally pick up signals from these devices. 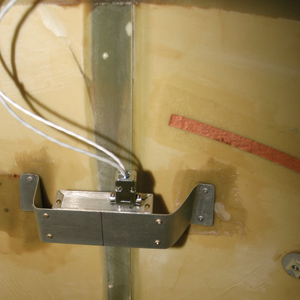 Beware of electromagnetic and radio-frequency interference around sensitive devices such as this magnetometer. The copper-foil antenna just ahead and to the right of this module will surely cause trouble.

Often this interference will exhibit itself as static, whines, pop, whistles, clicks or other annoying effects in our audio system during normal transmission and receipt. Some signals are intermittent (radio transmissions, strobe lights, gear motors), while others can be constant (magnetos, alternators, servo motors).

To avoid EMI/RFI we utilize protective devices and installation practices that minimize susceptibility to these problems. The devices used can be simple things like noise filters placed in line with certain items. Installation practices that will reduce problems with EMI/RFI begin with proper routing of wiring, cabling and antenna coax of devices in your aircraft that are vulnerable to interference. The main system that we are concerned with is the audio system. This consists of jack wiring, radio wiring, headset wiring, PTT wiring, inputs and outputs of radios as well as interconnects of audio components. The following suggestions will assist you in having an aircraft that is electrically quiet and not at risk of excessive interference: 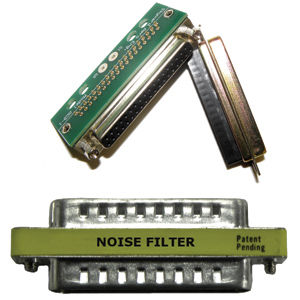 Inline filters such as these can remove EMI static.

If the manufacturer does not give any specific guidance as to the grounding of shielded cables, the default is to ground only one end.

Keep ground lines as short and direct as reasonable.

Try not to have large bundles of excess wires to, from and between various avionics items.

Do not run radio coax antenna leads closely parallel to or in the same bundle as wires that are prone to interference (any audio wires).

Use insulated isolating washers on all audio jacks installed in the aircraft.

Use only high quality aviation-grade wire, cables, coax and connectors in the electrical system of your aircraft.

Purchase the Aeroelectric Connection book written by Bob Nuckolls, which discusses these topics in more detail specifically as they relate to aircraft electrical systems. (Visit www.aeroelectric.com for more information.) 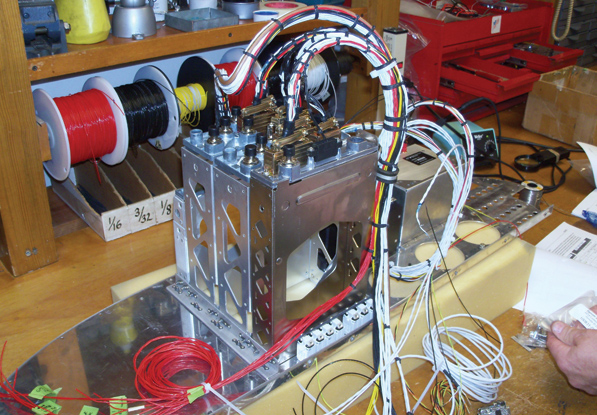 Just because the chassis are touching and are mounted to a metal instrument panel, it doesn’t mean you have good grounds. Be sure power and signal wires, especially noise-blanking shields, are properly connected and, as much as possible, brought to one place.

Overall, if you are careful when wiring your aircraft systems and installing your avionics, you will have an airplane that is a joy to fly as well as a joy to others who receive your transmissions. This topic is one of great debate, and indeed there are thousands of pages on the Internet and at your local library about grounding and interference. At first, the idea of herding electrons may be something that can cause confusion or fear, but there’s no need for either. Done properly, the electrons will all behave, and you’ll have a nice, reliable and electrically sound system in your aircraft.

Safety Is No Accident: Zenith