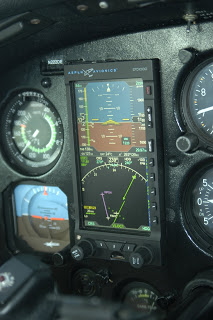 Aspen Avionics, the little EFIS company that has taken aviation by storm with its modular PFD/MFD designed for a low cost retrofit in aircraft with traditional analog instruments, announced the availability of a NEXRAD weather enhancement for its products.

“We did encounter a few challenges in the beginning. We could not get it to calibrate,” he says. A change-out of some washers from ordinary to stainless steel resolved the problem, and the unit worked fine. “We also did a burn in of the unit on the bench before putting it in the airplane, and we discovered that it required a supplementary avionics fan to keep the unit adequately cooled,” he says. “Also, currently the interface between the Garmin 430/530 and the Aspen products is being reverse engineered, so the Aspen does not talk well to the Garmin, even though the Garmin information does flow fine to the Aspen EFD.”

Gosselin says that should not be a big problem, however, because the Aspen EFD 1000 Pro is primarily a software driven unit, which is what makes it so affordable. That software is constantly being upgraded and refined, and the company has been good about sending these revisions to the shop, which can install them into the units for the customer.

KITPLANES flew the EFD 1000 Pro that Gosselin installed in a Cessna 182RG during the EAA AirVenture 2008 show. The unit boots up in 20 seconds, with all of its functions available within 40 seconds. The screen is brilliant and easily sunlight readable, even from the co-pilot’s seat, and even with morning sun pouring through the windscreen. Its “knobology” is simple, and one button-push brings up the soft keys, which allow the pilot to select from numerous map or PFD presentations. The unit slaved effortlessly to the Garmin 530 in the panel and picked up its flight plan and displayed it.

Inflight the EFD 1000 Pro updated smoothly, giving the pilot a realistic depiction during even steep turns. It coupled with the autopilot/GPS, even though this airplane does not yet have the software update installed to facilitate this. All in all, it was a strong performer from one of the first 25 customer installations in the field.