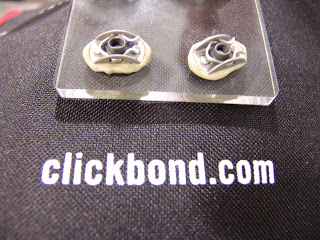 Having just spent a couple days replacing traditional cowling nutplates before coming to the show, I was intimately familiar with laying out the rivet holes for each one, drilling two different hole sizes, deburring, dimpling, and flush-riveting.

Then I heard there was a better way. With the ClickBond system, there’s only one hole to drill, some two-part glue to mix up, and the “installation fixture” to hold everything tight until the adhesive fully cures. Time savings? About 80 percent. 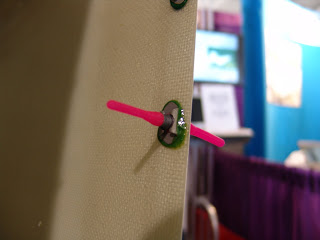 me up. It looks for all the world like a rubber worm that you might find in the bottom of your tackle box, only with some precise tapers to it. It’s simplicity itself to run it through the hole to hold the fastener tight, and then pulls right out with good tug after the glue sets up. The adhesive comes in two flavors, the $12 variety that sets up in under an hour, and the $20 high-strength stuff that takes 24 hours to cure. Each one is enough for about 50 fasteners.

If you screw one up and want to remove it after the glue has cured, it can be done with the application of some heat from a heat gun to about 350F degrees and the fastener will peel off. If you have a composite structure, however, some care is required to avoid overheating what’s underneath. 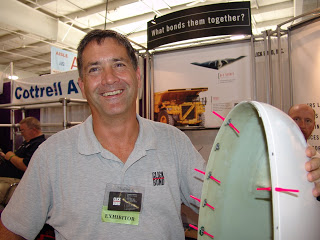 Currently in use by the military and commercial aircraft builders, the ClickBond system is gaining significant ground among homebuilders. Of course, it won’t replace traditional fasteners in structural applications, but they’re perfect for, say, installing cowling or fairing fasteners. “Sure, they’re more expensive,” says ClickBond’s Tim Anderson. “They run from a buck and a half to two bucks each. But they really save time. What’s worth more, your time or your money?”

Roy Beisswenger - September 19, 2011
0
Columnist Roy Beisswenger makes the case for the safety of light and ultralight aircraft. Don't believe it? Hell explain why.