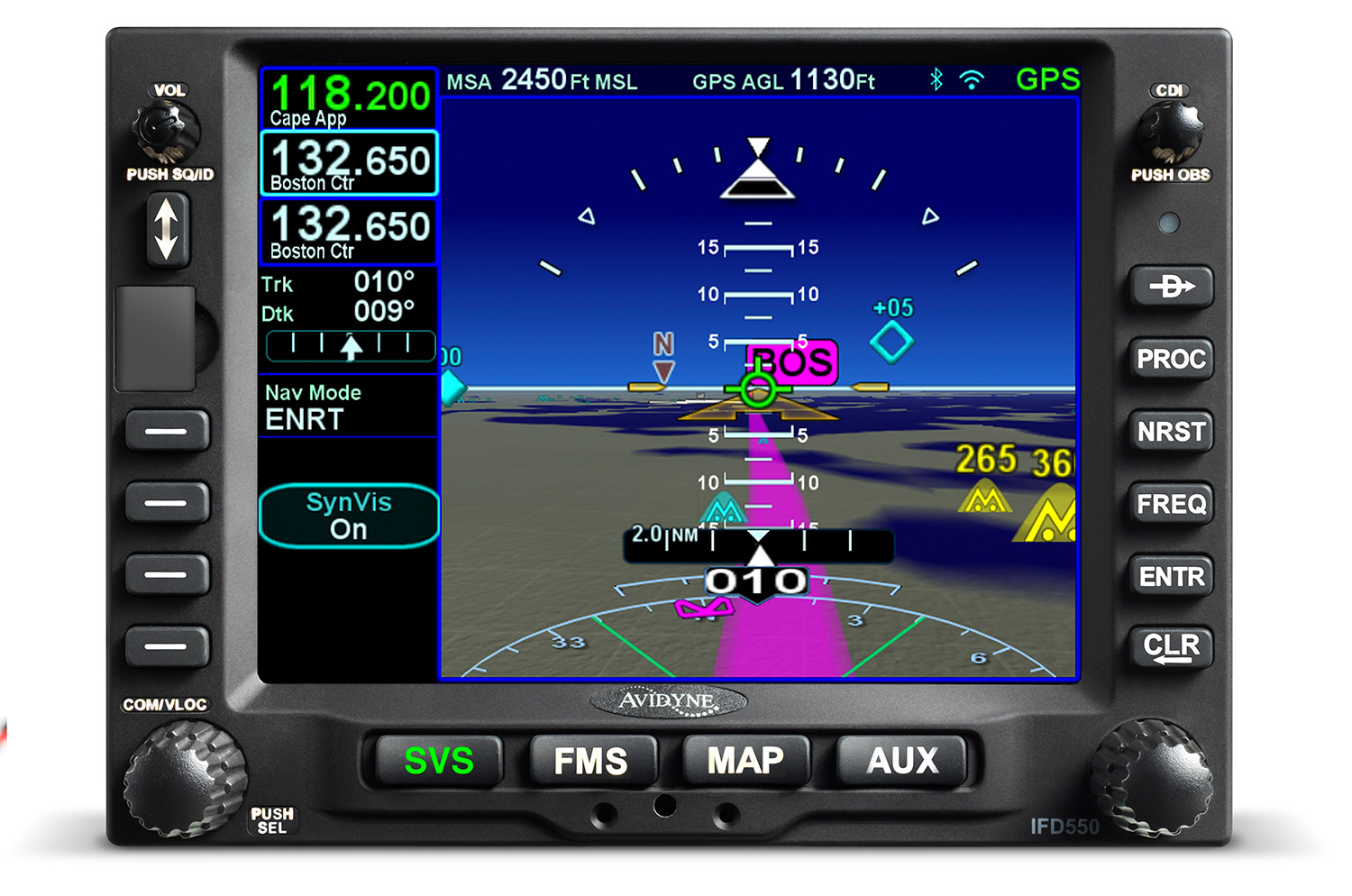 “Release 10.2 was a significant undertaking that adds Synthetic Vision and expands our line of IFD Series of FMS/GPS products, bringing them to a whole new level of capability, and setting them far apart from anything else available in the market,” said Avidyne president, Dan Schwinn. “Our new flagship IFD550 includes an integrated ARS which delivers unique Synthetic Vision and WAAS approach capabilities to a large number of aircraft that simply would have had no other options before now. It’s really terrific, and there’s simply nothing else like it.”

“With integrated Synthetic Vision and built-in wireless connectivity capabilities, no other navigators offer so much functionality, situational awareness, and ease of use,” said Mitch Biggs, Avidyne’s Vice President of Sales and Marketing. “Any aircraft owner upgrading their old panel-mounted navigator to an Avidyne IFD can get a modern hybrid touch-screen WAAS GPS, a place to view ADS-B traffic and weather, and a gorgeous Synthetic Vision display all in the same panel space.”

Avidyne’s new IFD550 is a full-featured FMS/GPS/NAV/COM with all the same functionality of Avidyne’s current IFD540, but with the addition of an integrated Attitude Reference Sensor (ARS). The ARS detects Pitch and Roll motion and enables the display of dynamic Synthetic Vision (SVS) with full-motion three-dimensional “out-the-window” views as well as exocentric “in-trail” views of the aircraft and nearby terrain, obstacles, traffic and terrain. The IFD550 also gives pilots the ability to toggle SVS off and view a traditional blue-over-brown attitude display, as well as overlay of Horizontal and Vertical Deviation Indicators, a Total Velocity Vector (TVV)/Flight Path Marker, and adjustable field of regard. IFD550 has a list price starting at $21,999.

Avidyne’s IFD100 iPad app gives pilots a fully redundant, large-format map that wirelessly connects to their IFD 4-Series or 5-Series GPS FMS system. It’s like having an additional large-screen instance of the IFD in the cockpit that pilots can configure and operate just like a panel-mounted IFD. On board ADS-B weather and traffic can be sent wirelessly to the iPad for display on the large-screen moving map. The IFD100 App is offered as a free download from the iTunes App Store for all IFD customers.

Avidyne is adding three new models of FMS/GPS-only (no VHF NAV/COM radio) models, the IFD545, IFD510, and IFD410. Each of these systems offer Synthetic Vision, Hybrid Touch, and integrated wireless capability. The IFD545 and IFD510 are designed as slide-in replacements for legacy GPS500 Series navigators, while the IFD410 can easily replace the GPS400, while providing all these significant new capabilities.

Release 10.2 Software Upgrade for existing IFD540 and IFD440 units is available for download directly from the Avidyne website at no charge. Optionally, the software is available on USB memory stick for $150 from Avidyne. Costs do not include dealer labor to upgrade existing systems.

All new-production IFD 5-Series and 4-Series models are available now and will begin shipping immediately with R10.2 functionality.

Pricing for IFD models with Synthetic Vision start at $9,499.

A full retail price list for all models is available.

Hands On: Soup to Nuts

Mike Loehle - August 10, 2010
0
Mike Loehle, of Loehle Aircraft, discusses the development of his aero coatings system and details some of the pre-paint prep process.

Warm Up Your Engine This Winter

Jon Croke - November 21, 2020
1
Count yourself fortunate if you live in a region where winter does not bring...