If you own an engine with Engine Components, Inc. (ECI) Titan cylinders, you’re probably well aware of recent action by the FAA to prevent cylinder-head failures. In 2008, the FAA released AD 2008-19-05, which impacted cylinder assemblies with the part number AEL 65102 and various serial numbers (See Table 1). Cylinders in a certain serial-number range were identified as Group A, while other cylinders were deemed to be in Group B.

If you have a Group A cylinder with more than 350 hours time in service, do a visual inspection of the head-to-barrel joint and a compression test (see sidebar) within the next 10 hours. For cylinders with less than 350 hours, do the visual and compression test within the next 10 hours TIS, or at 350 hours, whichever is later. The visual inspections consist of looking over the cylinder head for cracks around the exhaust valve side or looking for any signs of black or white residue of combustion gases. If no cracks are found at the initial inspections, repeat these tests every 50 hours until 1500 hours (for helicopter installations) or 2000 hours (for airplane operations), and then replace the cylinders. 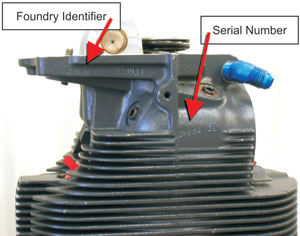 Determining if your ECI cylinders are part of the AD requires visually inspecting the head casting.

Group B cylinders are another matter. The initial inspection still applies, but the cylinders have to be pulled from service after reaching 350 hours total time. Thats old news. The FAA revised this AD on the last day of 2009, and it now affects more than 18,000 ECI Titan parallel-valve cylinders because Group B has been expanded. The reason for the revision? Continuing cylinder failures. Is the AD an issue Experimental airplane owners should pay attention to? Absolutely, especially if your cylinder serial numbers fall into the expanded Group B.

According to ECI President Glen Golden, the FAA never approved ECIs request to recall the known faulty cylinders. Instead, the agency requested use and failure data for Titan cylinders back to 2002, the year they were introduced. Golden said ECIs data pinpointed 30 cylinder failures in the approximately 18,000 Titan cylinders (excluding Group B cylinders) in the field. The percentage was so low, ECI didn’t think the failures were actionable. The FAA thought otherwise, and issued AD 2008-19-05. 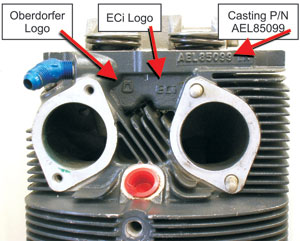 Affected ECI cylinders are all parallel-valve Lycoming types with the casting part number of AEL 65102. (The photo above shows a different part number for the purposes of deciphering the casting version.)

This expands the Group B serial number range upward to 42179-30, an addition of approximately 2500 more cylinders. Remember that the AD mandates that all Group B cylinders be replaced within 25 hours if they have more than 350 hours time in service (TIS), or before they reach 350 hours if they haven’t yet reached that plateau. Group B cylinders can be identified by the serial number-its on the intake valve side of the cylinder head on the side of the head. Some disassembly may be required due to lack of access and/or inter-cylinder baffling. The serial numbers will also be listed on the manufacturers acceptance tags that accompanied the cylinders.

How Did We Get Here?

Golden said the company became aware of a manufacturing problem in the head-to-barrel assembly process after a run of approximately 1200 cylinders produced over a two-month period. Due to a mismatch in the number of threads in a series of head castings, the threads in the steel barrel were cutting new threads in the heads during the barrel-to-head assembly process. This created a stress area in the head, which led to failures and, in some cases, in-flight head separations.

ECI found the problem and issued Mandatory Service Bulletin MSB08-1, which stated that the problem affected about 1200 cylinders, some of which had been shipped to the field. According to Golden, 12 failures were documented. Production was stopped, and ECI went to the FAA stating that it wanted to recall every one of the 1200 cylinders. There’s more to that story, but there’s no doubt that initially it was thought that 1200 cylinders (all in Group B) would need replacing due to a manufacturing defect.

Due to ongoing failures, and in at least one case an in-flight head separation that led to a March 2009 emergency landing in which three people were seriously injured, the AD revision expands the number of cylinders affected.

One of the inspection techniques described in ECI MSB08-1 is a soap-bubble test. This test is done when compression test results are below 70/80 and no excess leakage is heard past the rings (blow-by is heard through the oil level gauge tube) or the valves (leakage heard at the air intake and exhaust pipe).

In order to perform the crack inspection its necessary to inspect the forward-most cylinders. This positions ones head and arms in harms way, as all it takes for the prop to move suddenly with head-cracking force is the slightest bump. However, there is a safer way.

After the compression test, reduce the air pressure to 5 psi to the cylinder. This low air pressure will prevent the prop from getting away, as the piston is positioned as close to bottom dead center (BDC) as possible and finding the spot where the valves are still closed. Then the pressure can be increased to 80 psi and a solution of dish soap and water (approximately 1% to 5%) can be sprayed on the cylinders without danger.

Although the full testing protocol required to support a proposed alternate method of compliance (AMOC) for the AD is not yet complete, preliminary testing of an ECI developed cylinder rework process is so promising that Golden says owners will never have to worry about it again. If the FAA approves the company’s application, this method of compliance would be available for certified airplane owners.

As this article went to press, it was unclear whether ECIs AMOC for the in-house cylinder rework would be approved by the FAA. One source at the FAA said the AMOC had been revoked. When asked if this was the official announcement, the source declined to comment. Golden doesn’t believe the AMOC is dead, because the FAA has approved the test protocol. He feels the data gleaned during the complete test protocol will be so convincing that the AMOC will be approved.

At the same time, ECI is offering immediate resolution for Experimental-airplane owners under the premise that they are not guided by the same AD compliance rules; in essence, ECI believes, builders and owners can approve their own AMOC. (This continues to be a hotly debated point among builders, some of whom believe that ADs absolutely do apply to homebuilts.) Accepting this philosophy, the door opens for ECI to refurbish affected cylinders under the proposed, as yet unapproved scheme. ECI is ready to rework all affected Experimental cylinders at no cost to owners right now, today, with a turnaround time of three weeks.

Arrangements can be made and cylinder shipping boxes can be obtained by calling ECI at either 800/ECI-2FLY or 210/820-8101 or by visiting www.eci.aero/warranty. 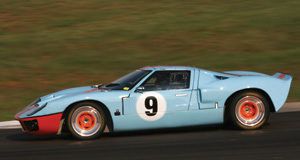