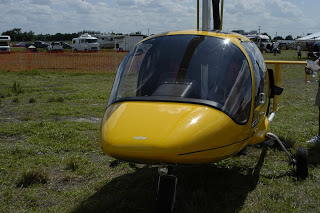 It’s taxicab yellow and bulbous on the bottom, but when Mike Bantum fires up the turbocharged intercooled Rotax 912 on the Celier Xenon gyroplane, heads turn to watch the twin-tailed gyroplane pre-rotate its extruded rotorblades and then roll just a hundred feet or so as it seems to hop into the air. “The Mitsubishi intercooler gives us operating air box temperatures around 89° F. It’s astounding,” says Bantum, who has been demonstrating the Xenon for J&M Gyros of Port St. Lucie, Florida, here at Sun ‘n Fun’s Chopper Town. J&M imports the Xenon as either an ELSA (factory-built) or a kit from Celier Aviation, located Jaktorow-Kolonia, Poland.

Designer Raphael Celier has made several updates to the design for 2008, the most notable being completely redesigned doors with a triple-pin latching system to prevent inadvertent openings in flight. T 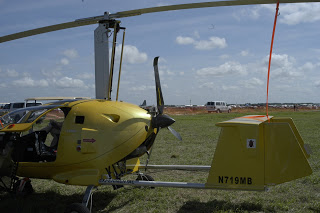 here is also a Dynon “glass” cockpit option available. The Xenon, which weighs 660 pounds empty, can carry its own weight, which is unusual in a gyroplane, explains demo pilot Mike Bantum. It’s French-built Duc-Helices forged-carbon Windspoon propeller helps boost the lifting power of the machine, as does its lightweight composite cockpit, which provides an efficient profile to the wind. Pilots who fly the Xenon can expect the short takeoff and landing capabilities of a gyroplane with a wide, comfortable cockpit for two and space for two 20-pound bags just behind the seating area.

Look for more about this innovative gyro and its prolific designer soon.