Having just returned from AirVenture 2017 in the last week (yes, I know you won’t be reading this until a few months later), I’d like to share some observations with you. First, I thought it was one of the best Oshkosh fly-ins (I still have a hard time calling it AirVenture) that we have attended since our first one in 1981. 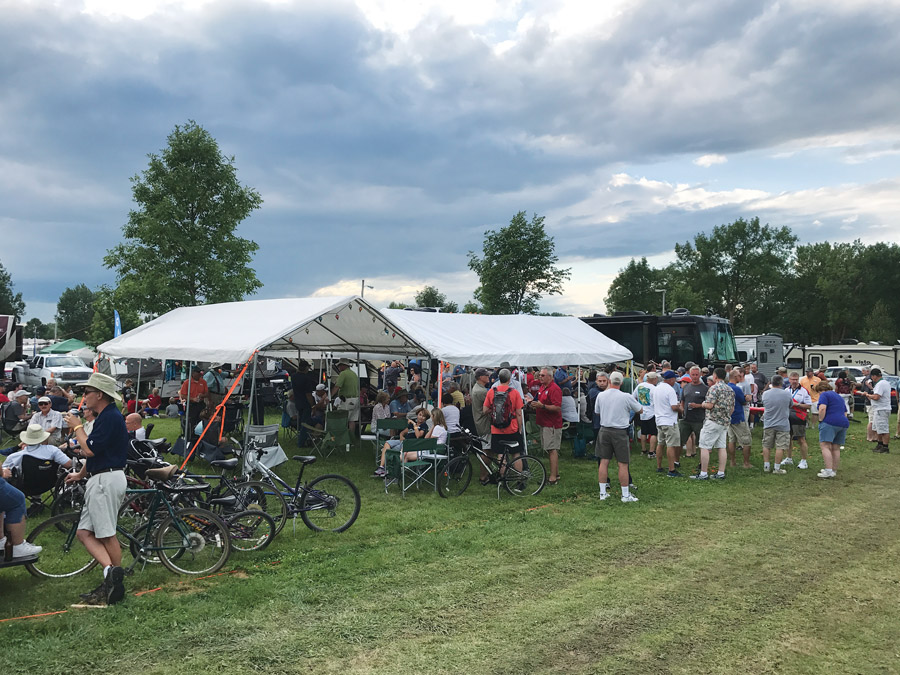 This was the 10th year of the RV-10 get-together on Sunday night in Camp Scholler. It’s really nice to spend time with friends and families in person as opposed to emails and forums throughout the year!

It was also nice that the weather cooperated, with rain only occurring twice during the week, and the temperatures were really moderate the entire time. Usually we overpack the clothes not knowing what to expect, and this year was no different except for one thing: We were taking Van’s RV-14A demonstrator instead of our own RV-10. Packing for 11 days in camp Scholler usually fills up the -10, but luckily FedEx makes it really simple to send and return stuff during the show, so we shipped a couple of bags of clothes and picked them up on our ride to the camp after we landed, courtesy of the Welcome Wagon service. What a great service the Welcome Wagon volunteers provide—it’s like Air Uber for AirVenture pilots!

So, while the weather was great, as were the airshows and attendance figures, what really made it so wonderful again were the people. I know you’ve heard me say it many times, and I know we aren’t alone, but our best friends in life have been met through aviation. I wear a few hats at AirVenture, which really keeps me busy, not unlike a lot of others. Between being the East Coast rep at the Van’s tent, participating in Homebuilt Council activities, attending the myriad of socials, and giving a few presentations in the forums, there wasn’t a lot of spare time left. However, I really enjoyed meeting the many KITPLANES readers and online forum participants who came by, introduced themselves, and expressed thanks for the columns and articles. It was truly amazing to be able to put faces with so many of the names I recognized from online conversations or phone calls. It became the highlight of my Oshkosh and also drove home to me the obligation I have to keep contributing. My sincerest thanks to all of you who introduced yourselves!

As usual, the airshows were great, and the night show on Saturday was absolutely awesome. I really like fireworks set to music, and with the space-themed songs and NASA communication snippets played during the show this year, Elton John’s Rocket Man will never be the same to me. While I know AirVenture is the Mecca for sport aviation, I was enthralled to see all of the military aircraft on display and in the daily shows. The bomber formations were a sight to see, especially the missing man formation with two B-29s, one of them pulling out as the missing man. As luck would have it, I was at the Van’s tent when the F-22 Raptor demo pilot came by to look at the RV-14. We had a great discussion, but I realized after he left I didn’t even offer to swap rides! I’m clearly off of my game. 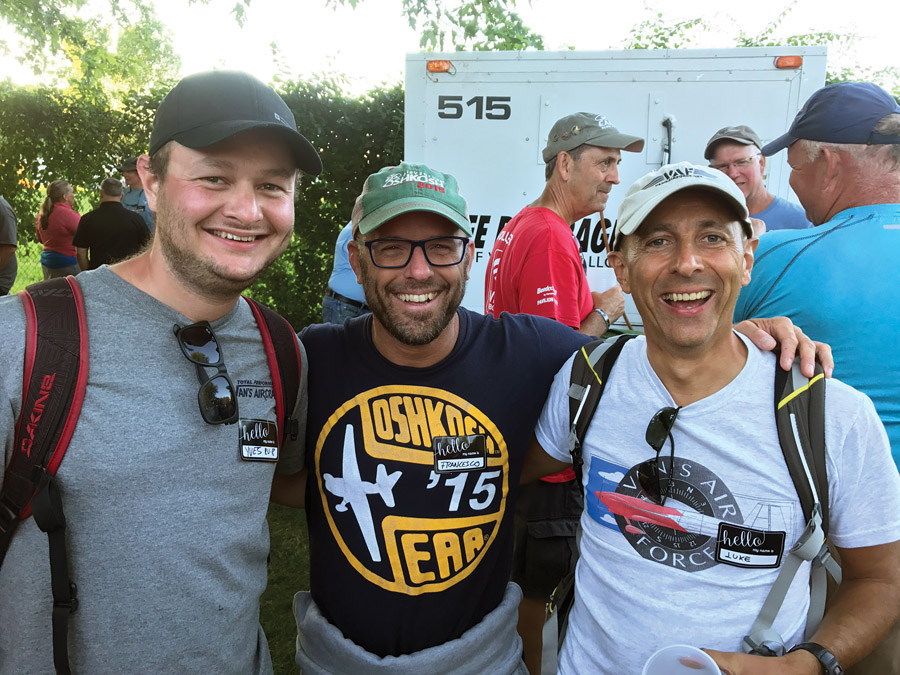 Speaking of finally getting to meet someone you’ve only exchanged emails with, I had the chance to meet an Italian DAR by the name of Luca “Luke” Perazzolli (right), and his friends and fellow builders of RVs, Francesco “Franz” Dante (center), and Yves Heller (left) from Northern Italy and Switzerland.

A little while later, a U-2 pilot came by as well. Having worked on U-2s during my time in the U.S. Air Force, we discussed some of the changes since the C and R models that I worked on. We also realized some things never changed, as both of us were stationed at Osan Air Base in South Korea over 40 years apart!

The daily airshow at AirVenture always opens with the singing of the national anthem. Of all the places I have ever been during the playing of the national anthem, never have I seen such respect displayed by everyone. The silence between the notes is almost deafening, all hats are off, and people are either at military attention or have their hands over their hearts. It is truly amazing. I’ve always wanted to take a picture of it, but can’t bring myself to do it.

Enough about Oshkosh. Time to contribute some substance. 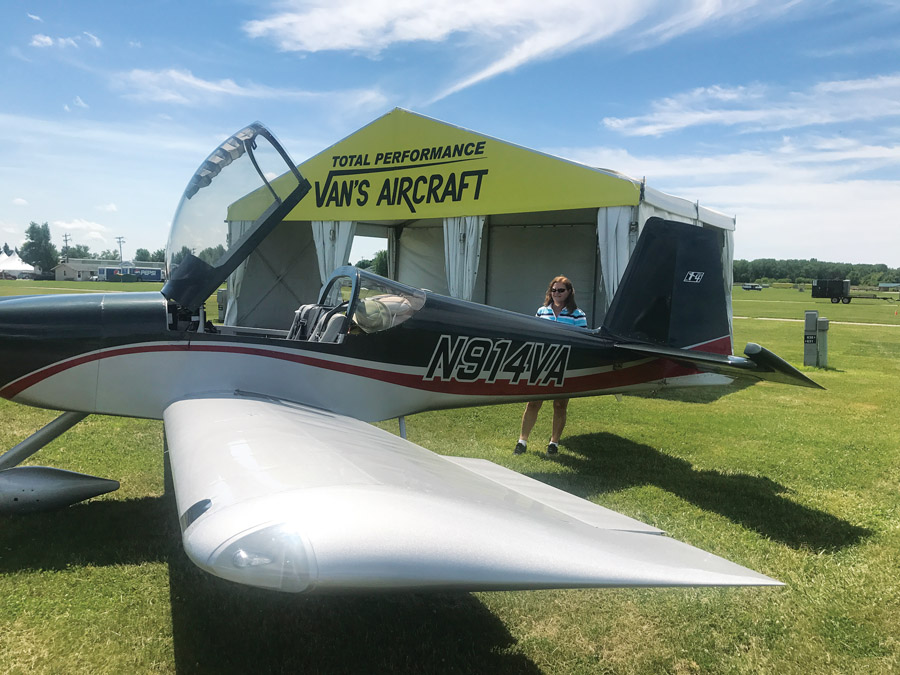 Arriving before the crowds at Oshkosh is always fun. The grass is still fresh, and it can be eerily silent sometimes. The first order of business was to safely deliver the Van’s RV-14A demonstrator to the booth.

In my last column on maintenance, I opined a little about the potential need for some training for first-time builders who are now issued a repairman certificate, the thought being that they are now first-time mechanics as well. I do hold that opinion, but at the same time I also think we need to figure out a way to provide that training, either through courses or a series of continuing articles that can be referenced when needed. From the many pre-buy and condition inspections that I perform, I see there is a need to educate new builders on the maintenance requirements and procedures of their new airplane. Many of the problems I find could be eliminated through education.

There also seems to be a discussion in one of the online forums that a second or subsequent owner/non-builder should be issued a repairman certificate when they purchase the airplane. On its surface this would be something that I would be adamantly against (not that it would make any difference, but it is my opinion), as it could be no different than allowing owners of certified airplanes to perform all maintenance and annual inspections on their aircraft. See how ridiculous that sounds? Just like in the certified world, there are many shops and A&Ps who are willing to perform owner-assisted inspections, but the final authority and sign-off rest with the A&P, who is hopefully experienced and trained on the particular aircraft. To open this up to the inexperienced new owner is not fair to the passengers, who have come to trust that there is some form of regulation/processes that are followed when it comes to the maintenance of aircraft.

So, not being a totally black and white person, I acknowledge that there could be exceptions. As an example, how about a builder of a particular model of an aircraft, perhaps even a repeat builder, who now purchases the same model that has already been built by someone else? Today the new owner would not be eligible for the repairman’s certificate, but I would venture to say that he or she might actually be more qualified than a local A&P. So perhaps on an individual basis it might work, but as a general practice, I think it is a mistake. Quite a few of us as DARs are seeing more airplanes being built by pro shops, with the owner still receiving the repairman’s certificate. I’m OK when the builder fabricates it under the builder’s assist model and with the proper participation. I actually think some of the true builder assist shops make the whole experience a lot more fun and educational than it can be just by doing it yourself.

As a final note about AirVenture, I hope those of you who camped in homebuilt camping this year enjoyed some of the new facilities. The EAA Homebuilt Council has been working hard over the past few years to secure funding for many upgrades in this area. Over the next few years, you will continue to see improvements, the focus of which is to better highlight and accommodate the largest and fastest growing segment of aviation, homebuilt aircraft.

It’s also the most fun part of aviation, right?