Back in July 2014, I wrote a column justifying all of the toys we pilots like to have in the cockpit. Some are pricey, no doubt, some are nice to have, and every once in a while one of them saves the day. Or so we like to think so as to justify another expenditure.

Since technology in the cockpit is probably changing faster than anything else in aviation, it seems there is always another opportunity to upgrade or add a new toy. I am just as guilty as the next pilot, so I thought I would share an update on some things I’ve done since that last column. While it might seem like a product review, in no way do I intend for it to be. I am just sharing some of the choices and changes I’ve made, along with my experiences and opinions. Plus, I do a fair amount of work on airplanes for my customers, so I get to see how some of these things work out for them.

By now most of you know that I am a believer in electronic ignition. I do a lot of high altitude flying since I live in the southeast. In the summertime I am routinely flying in the mid teens to avoid all of the pop-up thunderstorms. Flying at those altitudes usually ensures a cool, smooth flight, and rarely do I get wet. In fact, 99% of my flights are able to be completed VFR. The RV-10 is a really nice performer at those altitudes, with fuel burns around 10-12 gph and TAS of 162-170 knots, depending upon temps, altitudes, and weights. With my currently installed Light Speed Plasma III ignition system, I can see the ignition timing advance on the cockpit display, and it is usually around 30-33 degrees at those altitudes. If I turn off the Light Speed so that I am only running on the magneto, there is a substantial drop in power due to the magneto’s 25-degree fixed timing. Yes, I am still a believer in one magneto and one EI, just for safety’s sake. I know there is a growing base out there of pilots with dual electronic ignition systems, including one of my customers, but I am still a holdout. I even ask myself “why not” sometimes, since I have never had an electrical failure in any of the airplanes I have built.

Yes, I have tried some of the other electronic ignition systems. I even installed an Electroair ignition system on my own RV-10, and have installed them on a number of other airplanes as well. I find it to be reliable, and Electroair even sells a certified version of their system. But even the certified version still requires one mag to be left on the airplane. Seems as though I have a supporter in my own way of thinking! I do like the cheap price of the auto plugs used on electronic ignition systems, and I routinely replace them every 100 hours.

Another area of technology advancement is in the battery department. Over the last few years, there have been a number of companies that have introduced lithium batteries for use in aviation, with EarthX being one of the leaders and avid supporters. I installed one of the ETX 1200 batteries in my RV-10 about two years ago, and it has been trouble free. I like the fact that it has a battery management system that can give you a heads up if it senses something wrong with the battery, such as a bad cell. More importantly, it is 20 pounds lighter than the Odyssey battery it replaced, and that 20 pounds was aft of the baggage compartment, a big advantage when flying the 10 with all four seats occupied. I’ve installed a number of them in my customers’ airplanes, and there’s one in the RV-12iS demo that I fly as well. EarthX support has been wonderful, with them replacing any batteries that have had any kind of problem.

I like having the METAR screen up on the transponder in the Stearman (no EFIS). Usually as soon as I am airborne, the METAR pops up for the designated airport. In the Stearman the ground winds are really important when it comes time to land, so it is nice to see what they are doing while en route. Diversions to better suited runways take a little more planning at 80 knots!

Another area of rapidly changing technology has had to do with ADS-B and the fast-approaching deadline of January 1, 2020 for everyone to be compliant with ADS-B Out. Lots of the gadgets out there to date have enabled us to receive much of the ADS-B services, such as traffic and weather, for free, and I think it has added a real level of safety in the cockpit. My RV-10 with the AFS system has been 2020 compliant for a couple of years now, as are the Van’s demo airplanes, but I have also kept up my XM weather subscription, as one of the things I don’t like about ADS-B is that it’s really hard to get a weather picture prior to being airborne unless you are right at the airport with a transmitter. Not so with XM, as it is satellite based. Traffic in the air can usually be picked up on the ground prior to departure due to the way the system works, which I won’t go into here.

I have tried some of the portable solutions, such as Stratus and Scout, as I use ForeFlight on my iPad in the cockpit. I really needed the portable solution for the Stearman, as I only recently equipped it for ADS-B Out. I installed the Lynx 9000 GT transponder I purchased just prior to leaving for OSH, and it is giving me everything I want in the Stearman—2020 compliance, weather, traffic with audio warning, and Wi-Fi to my iPhone and ForeFlight. Yes, it may be overkill in the Stearman, but I live underneath the Atlanta Class B airspace, and I have had two near midairs recently, one of which was pretty scary. I even added AeroLEDs’ PAR 46 light on the Stearman and set it on wigwag. I know it won’t help if the other pilot is heads-down in the cockpit, as I sense too many pilots are these days, but I do want to stack the odds in my favor whenever I can.

The Lynx 9000 GT has an amazing amount of information that can be displayed on the screen. Traffic is also sent via Wi-Fi to my ForeFlight app. The NGT 9000 also outputs an audio warning and illuminates a light on the instrument panel in my field of view that gets my attention.

Speaking of lighting, the output of LED lights is phenomenal! The older I get, it seems as though I can’t get enough light for night landings, especially when landing on our grass strip and trying to keep an eye out for deer at the same time. On the RV-10 I’ve gone from HID lights to Whelen Parmetheus Plus, and finally on to Baja Squadron off-road lights, which are fantastically bright. The only challenge to using non-aviation LED lights on the airplane is the potential for RF interference, so do check them before you install them. 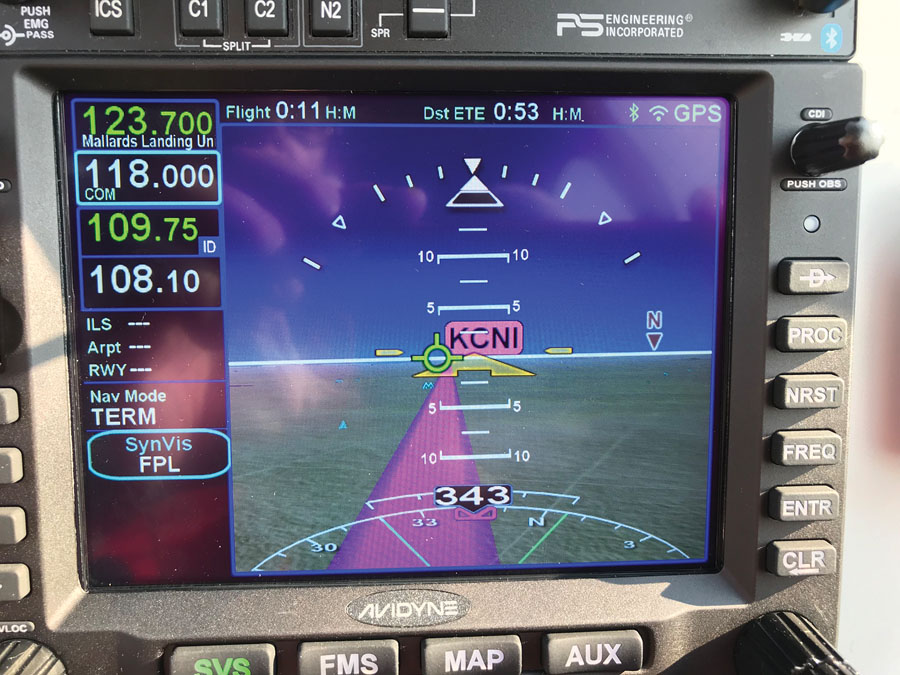 The IFD 550 attitude display is really impressive, showing a track, your target, and compass card. The screen is super bright as well!

The last area where I have seen advancements has to do with some new backup attitude indicators, such the Garmin G5, which is really cool in that it also has an HSI screen that you can tie to your GPS. Originally designed as a backup, I have installed some G5s as a primary EFIS, and with two installed in a vertical stack, it is a pretty powerful setup in its own right. The legendary stalwart in the industry has been the Dynon EFIS-D10A for many years, and I had one installed in a few of my airplanes. When I needed more panel space, I opted for the self-contained Dynon D2 affixed to the instrument panel dash. Prior to these kinds of products, some of us were known to use gyro apps on our iPhones as a backup when poking into the clouds. Once while in IMC, I did have a certain manufacturer’s screens do a complete reboot due to a bug, and I was able to keep everything upright using the D10A while the screens rebooted. I was very glad I had added a backup or I probably would not be here writing this column. 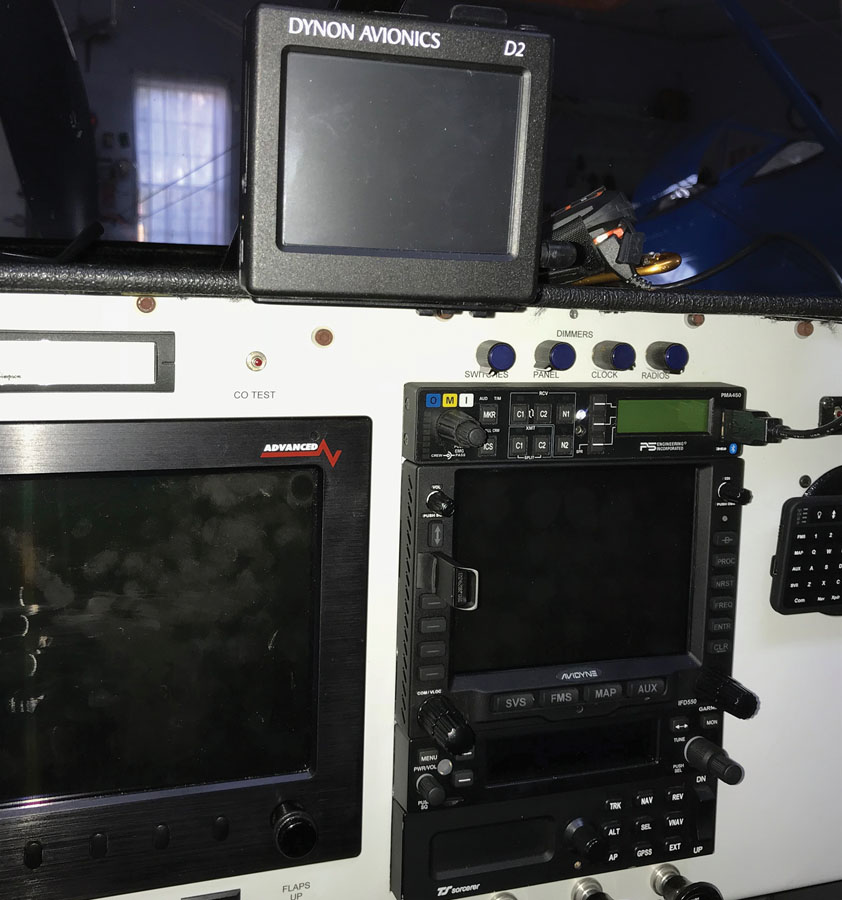 The D2 has been a stalwart backup indicator for many years in my airplane, but with the new IFD 550 with an internal attitude indicator, I have finally removed it. The added benefit is better visibility out of the cockpit, too!

Another neat backup that caught my eye was the new Avidyne 550, as it has a built-in ADAHRS. When I first saw it, I really liked it but couldn’t justify changing out my Avidyne 540. However, when Avidyne announced an upgrade path for current owners, I jumped at it. My logic to the CFO (Carol!) was that we could remove the D2 from the dash and increase the view out of the newly installed window in the RV-10. It sounded really good to me anyway. The eye-rolling indicated otherwise, but suffice it to say it is now installed. A surprise for me was that when I first powered it up, I noticed how much brighter it was than the IFD 540. At first I thought it was just me wishing it to be brighter, but a quick call to Avidyne assured me I wasn’t seeing things. It’s a brighter display with a wider viewing angle, and the new displays have been incorporated into the 540s as well.

I wrote this sitting in our camper at AirVenture 2018 on Sunday morning. It had been a wet couple of days, and when the ceilings and rain finally lifted, I enjoyed watching all of the pent-up arrivals. At the same time, Carol was working on my schedule so I wouldn’t have time to find any more new toys at AirVenture. No problem—I snuck a meeting onto my calendar called “fun” and told her it was mandatory!

Bad Indication or a Real Problem?

Vic Syracuse - September 19, 2021
1
How many of us have seen an unusual engine temp/parameter indication and wondered if...