Way back in 1991, I moved with my family to Atlanta, Georgia, from Cleveland, Ohio, due to a promotion at Hewlett-Packard. Flying the Kitfox to Georgia was a really fun trip, although I still had to go back to Cleveland and drive the family down. I still pride myself that in over 23 years, I have only driven into our state once and have never driven out. Can you tell I would rather fly than drive?

One of the first things I noticed after moving with regards to aviation is that the flying opportunities increased dramatically. Anyone who thinks Chicago is the Windy City hasn’t been to Cleveland! Yep, the weather in Atlanta is certainly more conducive to fun flying.

Even though we moved to Atlanta, all of our extended family was still in Cleveland and when the holidays rolled around, we tried our best to make the pilgrimage. For the first few years, we were partners in a Cessna 182, and then the partnership moved up to a Beech S-35, which was really nice because the 25-knot increase in speed eliminated the need for a fuel stop. However, we were still at the mercy of the weather, as neither airplane was approved for flight in known icing. 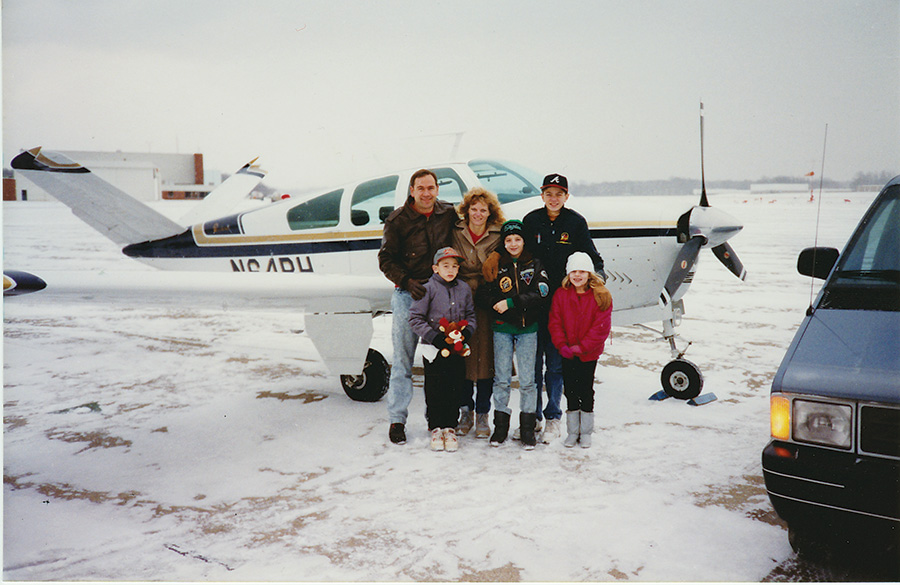 A visit to Cleveland over the holidays usually presented snow and wind, substantially different than Atlanta. This Bonanza was our family transportation during an era I couldn’t convince Van to build a four-place.

After a few trips back and forth to Cleveland, we noticed a few things. First, the nice weather days in Atlanta didn’t always guarantee a nice trip all the way to Cleveland.

Remember the fun factor I am always writing about? I fly for fun and try to make sure that when the family is along for the ride, we do as little IMC flying as possible. I think it is important that the family/passengers get to view the scenery. And if you happen to be the least little bit claustrophobic, as is my wife, then the inside of a cloud isn’t exactly enticing—especially when there are bumps and icing, as was usually the treat when headed to Cleveland.

Oh, did I mention the important holidays were in November and December? Doesn’t exactly conjure up warm memories of Cleveland, does it?

One Christmas morning, it was in the mid 50s in Atlanta, and my two sons and I actually put up a basketball hoop. Then we left for Cleveland and landed in a blinding snowstorm, which was due to unforecasted lake effect winds. It then proceeded to snow every day for the entire week. On New Year’s Day after properly preheating the Bonanza, we departed and arrived back in Atlanta to 70 degrees and sunshine. We all jumped out of the airplane and were in the process of shedding all of our winter clothing when our youngest said, “Dad, we don’t have to do this every year, do we?” We all got a good laugh, but ended up making the trips a few more times.

I think it was the very next Thanksgiving that we were planning to head north again. Even though I try to avoid IMC when traveling with the family, experience had taught me to stay current and proficient for the trips to that part of the country. So, on the morning of our departure, I decided to go practice some ILS approaches at a nearby airport, primarily to make sure all of the equipment was working.

My oldest son was riding along with me, and very quickly we noticed some unexplained weather phenomena. Even though the forecast was for a clear VFR day, there was a layer of thickening clouds beginning to build. During vectoring for the third ILS approach, I observed two things: The cloud layer was now at the same level as the FAF (final approach fix) for the ILS, and the temps were much warmer than at the surface. I remember saying to my son that we appeared to have an unforecasted inversion rapidly moving in, and we needed to get back to our home base airport immediately, which was about 15 minutes away. I requested an IFR clearance for the localizer approach and ended up breaking out at minimums. By the time we put the airplane away, the tops of the trees were barely visible. 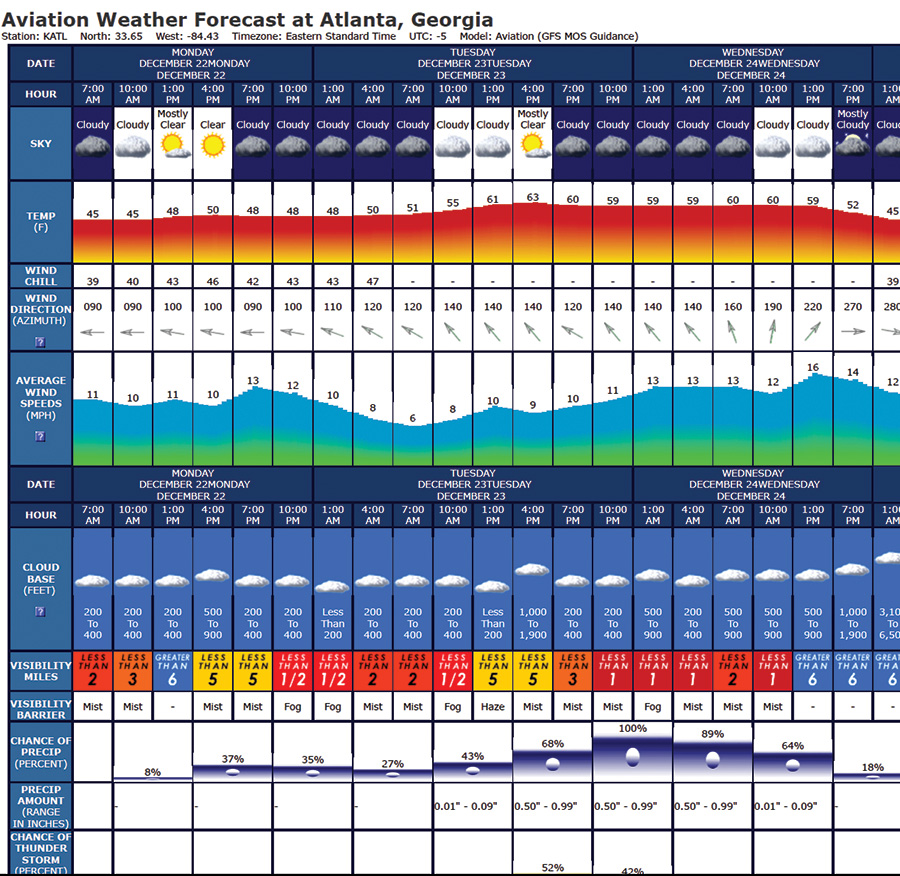 Here’s a typical Atlanta forecast that usually occurs for a few days in November and December. Departing into low ceilings single-engine with low icing levels and no near alternates is a no-go decision for the author. (Courtesy of AirSports.net)

We went home and I told my wife we weren’t going to Ohio, as I won’t take off single-engine IMC without a legal alternate nearby. I also mentioned that I bet some pilots were going to get hurt this weekend. Sure enough, the inversion kept the ceilings below minimums for most of the weekend throughout Georgia, and there was at least one fatality from a pilot who headed to Atlanta without enough fuel and sense to turn around. His fuel ran out on the second attempted ILS approach with dire consequences.

We did get up to Cleveland for Christmas, but ended up making an approach at night in 35-knot winds, most of which was a crosswind component. The winds were supposed to materialize two hours after our arrival. So much for that forecast. The bumps were so bad I was having a difficult time timing the touchdown with a downdraft, and decided to go around and try again. I could sense the tension in the cockpit, and I commented that we would probably pay good money for a ride like this at Six Flags. Everyone laughed, and I did manage to get it on the ground on the next attempt, commenting that we would go to another airport with the runway better aligned into the wind if this one didn’t work out. So far, that has been the only actual go-around in my 37 years of flying, other than for a couple of missed instrument approaches.

After a while we gave up on trips to Ohio for the holidays and decided October would be better. There are some nice days in October in that part of the country!

Here’s one of the most recent go/no-go decisions I’ve had to make. To give you a hint of where this is going, as I write this I am seated in the gate area waiting to board a Southwest Airlines flight back to Atlanta from Kansas City.

Every November I go visit my brother on his farm in Missouri and catch up with him while we attempt to thin the deer herd. We’re usually pretty successful, thanks to his experience, and manage to put a lot of meat in the freezer and donate some to the shelters as well. I like to fly myself in the RV-10, as it is only about a four-hour trip, and certainly very convenient with the -10 parked at my house. It’s a lot longer with the airlines if you count the time to the airport, going through security, checking bags, etc. You get the idea.

I usually start watching the weather about a week before I am leaving on a long-distance trip, comparing actuals with forecasts and looking for any trends. This past year the trip was looking very doable. I’ve learned over the years that traveling to northwest Missouri in November is a lot like traveling to Cleveland for the holidays—not always predictable.

I was planning to leave on Friday and return on Monday. The forecast was for VFR, but with three inches of snow on Saturday and Sunday. No problem, I thought. I’ll be on the ground while the front goes over us. I was very much looking forward to the flight. However, the day before I left, a nagging feeling surfaced in my head—better check surface temps for Monday’s departure.

Sure enough, the forecast showed temps in the lower teens. Yikes! I hate being cold, but even more so, I won’t start my Lycoming without preheat below 30 degrees. And I realized that the no-service little airport at which I usually park might not even have snow removal capabilities. So, between the temps and the snow, the airlines win again. So far, I am about 50% on making this annual trip in my airplane vs. the airlines. But I had fun, and didn’t stress out about flight conditions.

That’s what it’s all about, right?