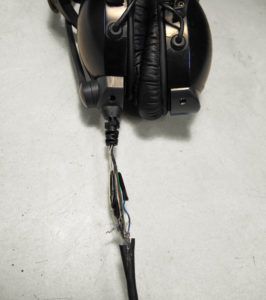 Drat! The headset is intermittent again!

The insulation on the cable from the ear cup to the battery holder had become frayed with age and use, exposing the tiny wires to strain every time the headset moved, causing them to break. Each time they broke, they were carefully soldered together, sometimes with a short patch wire, but this only concentrated the strain at the end of the new repair, and after three failures in the last 10 flights, it was time to look for a better solution. Unfortunately, Bose no longer repairs Aviation X headsets. There had to be a better way than spending 1 AMU (Aviation Monetary Unit) on a new headset when the old one was otherwise perfectly serviceable!

Good practice in aircraft wiring means restricting connections to only the two ends of each wire and avoiding splices or other unnecessary connections in the middle. I was violating that good practice every time I soldered the wires and paying for it with an unreliable headset.

The Bose headset uses a fixed connector in the ear cup, with pins sticking out to interface with the microphone assembly. This carries all the audio and noise-cancelling connections into the ear cups. Inside the microphone assembly are two connectors: one that is held in a molded bracket so it interfaces with the ear cup pins and another that connects to the microphone itself. Neither connector looks like the typical Molex or D-sub connectors used in the rest of the airframe, but careful measurement, online digging, and trial and error revealed that both connectors are in fact commonly used in personal computers and readily available through electronics suppliers. As the frayed portion of the cable only extended for a few inches below the ear cup, the bad portion of cable could be cut out and new connectors installed.

The main ear cup connector is known as a Dupont 2.54 mm “two by five,” meaning there are two rows of five conductors with 2.54 mm spacing between them. This is quite a small connector.

Connector descriptions typically show a measurement that is the distance between individual conductors within the connector. The actual conductors are a matching pair of pin and barrel, which are typically described by the size of wire they carry. There are different manufacturers of connectors, pins and barrels, and it is important to ensure that the style and size of pin and barrel match with the connectors they are intended to be used with.

Crimping tools are normally sold with a reference to either AWG or mm², which relates to the size of wire that will be crimped, as well as a reference to the model of connector system they are compatible with. It can get a bit confusing, but the important part when buying connectors and crimpers is to distinguish between the pitch (spacing) between the conductors in the connectors, and the size of the pins/barrels and the wire sizes they accommodate. For example, the SN-01BM crimper I used for the 2.54 mm connector is good for AWG 28–20, which translates to 0.08–0.5 mm2. Better crimping tools will have a ratcheting mechanism that will not release the pin/barrel until it has been fully crimped.

The microphone connector is even smaller. It is a 1.25 mm 3-pin Molex 51021/51047 PicoBlade. Similar to the above, the 1.25 mm refers to the pitch of the conductors. The 51021 end houses the female barrels that connect to the end of the cable. The 51047 houses the pins and is on the microphone end of the connector. These are really small! When the ears of the pins/barrels are parallel to each other, they are only 0.04 inch (1 mm) apart. Working with them feels a bit like being an apprentice watchmaker. Unless you are blessed with the vision of a teenager, reading glasses and magnifiers are mandatory equipment.

For the PicoBlade connectors, I used an IWS-3220M crimper, which is good for AWG32-20 or 0.03-0.52 mm2. The jaws move a little differently from larger crimpers, but the principle is the same.

Stripping the wires requires a tool that can adjust down to very fine wires. I found a Stanley 84-213 stripper for 10–26 gauge wire works well, but it must first be adjusted to the correct size for the headset wires. Practice stripping the ends of the wires first, before cutting them to final length.

Assuming that the microphone (pin) end of the connector is in good condition, repairing the headset will require working only with the barrels—not the pins.

There is one wire that runs between the connectors. Using a jeweler’s screwdriver, it may be possible to lift the locking pins of the connector, extract the barrels from the old connectors and reuse the same wire and barrels in the new connectors. If not, be sure to save a length of wire from what will be cut off the end of the cable so a new wire with two new barrels can be constructed.

One Step at a Time

The actual process of repairing the headset is as follows:

When placing the new barrels into the new connectors, it may be helpful to get them all started together, then press each one individually until it locks into place with a clicking sound. Tug on each wire to ensure it is locked in position. If it doesn’t lock into place, the barrel may be upside down. Rotate it 180 degrees and try again. The hard part is now done! Plug in the new microphone connector, place the “two by five” in one side of the microphone shell and reassemble. Test in the airplane to ensure everything works and go fly!

If the old headset cable is not salvageable, a new multi-conductor cable could be acquired from an electronics supplier. However, be careful to ensure that the outside diameter of the wire is no greater than the old if you want to reuse the old grommets. One possible cable could be Digi-Key part no. T1351-1-ND (around $3). However, this is not a shielded cable and may or may not allow some electrical noise to intrude. Before proceeding with this, make sure the battery box end can be opened and confirm what kind of connectors are required. I could not get the screws to release on mine and gave up, as I was planning to leave this end of the cable alone, anyway.

The total cost of the repair was just over $60. This included acquiring a good stock of connectors, barrels, a new wire stripper and two new crimpers, all of which can be used on other projects (“It’s an investment, dear!”). The end result is a slightly shorter cable, but hopefully the repair will significantly extend the life of the headset.

Everything for this project was acquired new on eBay, but the items are also carried by a variety of electronics parts suppliers (Digi-Key, Allied, etc.). There may be suitable alternatives to any of the following, but this is what I used:

In addition, a magnifier head strap with lights from Harbor Freight for around $5 is a very helpful tool for seeing these small crimps.

If the wires are good, but the ear cup bracket has broken, see “3D Printing to the Rescue!” [October 2018] where we walk through the process of replacing a broken ear cup bracket for a Bose Aviation X headset, using inexpensive 3D printed parts.

Ken Scott - October 17, 2008
0
When they couldn't find a likely single-seat homebuilt that would work as an inexpensive but reliable commuter airplane, two builders who are well versed in metal aircraft construction took it upon themselves to design and build one;

Doug Rozendaal - September 18, 2008
0
When Joe Bartels bought the company from founder Lance Neibauer in 2003, he knew it was time for a change. The goal was to find a high-performance aircraft that could be flown by the average pilot in the target market. The solution can be found in the company's newest product, the Pratt & Whitney-powered turbine Evolution; by Doug Rozendaal.