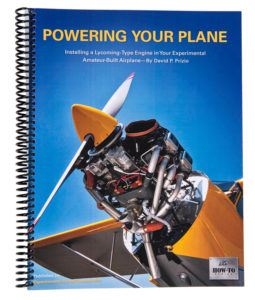 “Powering Your Plane” by Dave Prizio is a new book that will help readers correctly install a Lycoming-type engine. It covers each step of the engine installation process, including selecting an engine for your project, firewall construction, plumbing, electrical, preparing for your first engine start, and more. By focusing just on Lycoming and similar engines, such as those by Superior and Continental ECi, the author is able to go into great detail about the types of engine installations that most builders use.

Prizio’s book has numerous illustrations and photos to help builders maneuver through the challenges and intricacies of engine installation. EAA member Dick Koehler, a Tony Bingelis Award winner for his contributions to the homebuilding community, assisted with the technical editing.

Prizio is an experienced aircraft builder, an FAA DAR, and member of EAA’s Homebuilt Aircraft Council. His book builds on EAA’s easy-to-follow guides written by the late Tony Bingelis 30 years ago, which became the definitive how-to manuals for aircraft building and are still available through EAA.

“Tony Bingelis guided me and inspired me with his writing as I began my first airplane building project more than 25 years ago,” Prizio said. “The desire is to work with EAA to build on his wonderful work and update the knowledge and skills needed to safely and successfully complete an airplane.”

“EAA has long been the leader for information specifically for those who build and restore aircraft, going back to our founder Paul Poberezny, who set the standard more than 60 years ago,” said Charlie Becker, EAA’s director of chapters, communities, and homebuilt community manager. “This latest publication adds to the long tradition of EAA members helping members by sharing knowledge and information to promote safe and fun flying.”

The spiral-bound book is available through EAA’s online store and is priced at $28.98, with a $5.00 discount for EAA members. It ships for free through April 30. It can also be found at the EAA AirVenture Museum gift shop in Oshkosh.

Dave Prizio - August 10, 2012
1
Dynafocal, conical or DIY? Some engine-mount decisions are dictated by your choice of engine, but there’s more to it than that. Dave Prizio walks you through the process of mating engine to airframe.