I’m not really sure when we finally decided it was time to update our instrument panel. I’m aware that there are a few people out there shaking their heads at the mere mention of a panel upgrade. After all, the airplane received its airworthiness certificate in 2008. How out of date could the panel be? 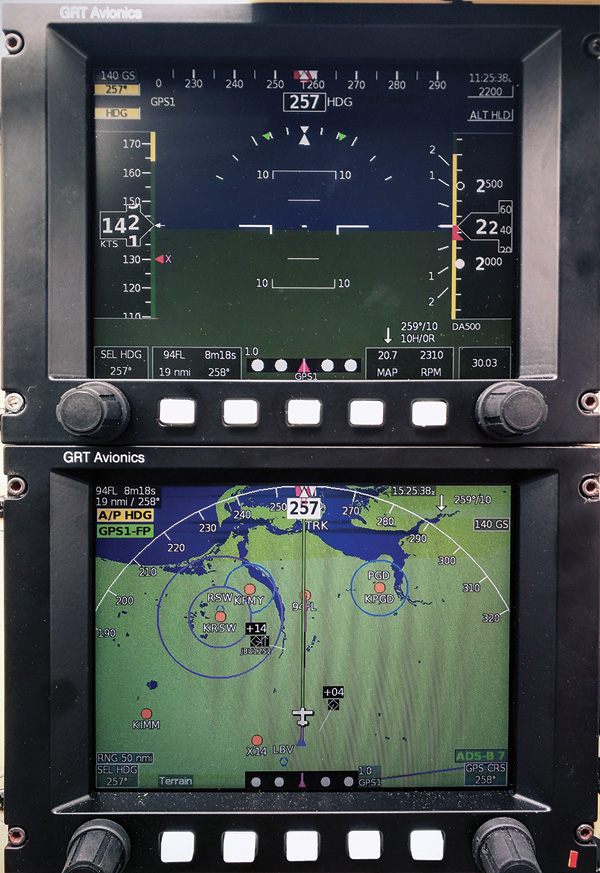 Well, since you asked…We began construction on our Van’s Aircraft RV-10 the winter of 2004 (serial number 250-something). Frankly, I should not have even been thinking of an instrument panel at that point, but so much of the reason we were building was centered around the fact that we wanted a modern, sleek, well-instrumented, IFR-capable aircraft. What the instrument panel could hold, relative to our budget, was key to the whole project.

Turns out it was 2004 when GRT Avionics’ Greg Toman developed the Horizon I EFIS for his RV-6A. It was one of the more robust EFIS units on the market, and to be honest, I spent a lot of time hanging around the GRT booth at Sun ‘n Fun and AirVenture ogling at the box. It was in our budget. We had experience with the company’s venerable EIS unit, which we had put in our Kitfox IV in 2000, and we liked the way Toman built his products. Robust, hardened, and durable—those are words you like to hear when you are purchasing electronics—especially avionics. Toman also offered his databases for the Horizon I units for free. Anyone paying for IFR Garmin GPS database updates knows how much that is worth over the lifetime of any instrument.

It was another two years before we actually purchased any instrumentation for our build, and if I had it to do again, I’d have delayed the purchase for even another year, if I could get away with it. As quickly as avionics are developing and improving, the longer you wait to outfit your instrument panel, the more likely you are to find the coolest, most capable devices to populate its real estate. As it turned out, by the time we got our RV-10 flying, in mid-2008, the Horizon I EFIS that was pretty much the neatest thing I’d seen in 2005 was already looking a little dated. Toman brought out the EFIS HX, with a faster processor, more connectivity, and larger, high-definition screens right around that time. Argh! 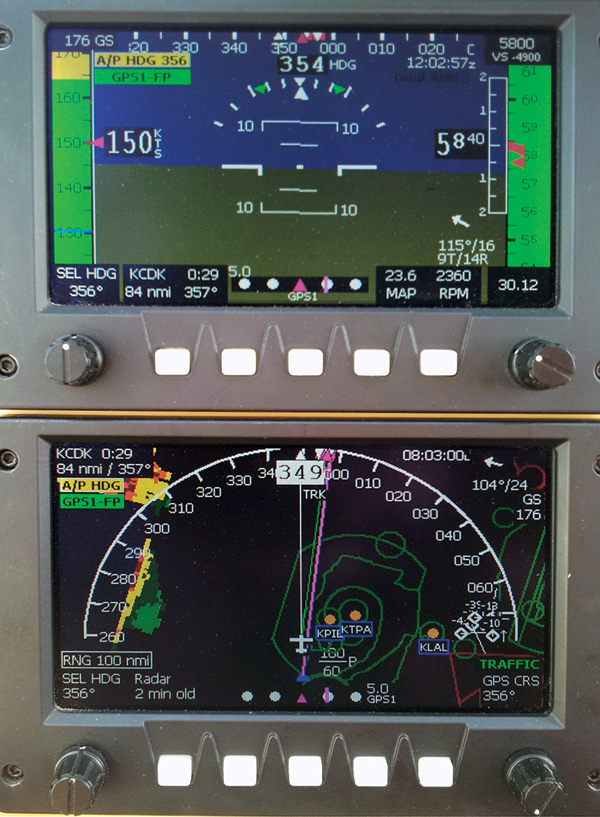 I was found hanging around the GRT booth once more, ogling this time at the HX boxes. Swapping mine out was, well, possible. But financially really not practical at all. Toman was supporting the Horizon I, and the boxes I had put in my airplane were rock-solid performers. My extremely practical builder/husband/mechanic pointed out that you don’t mess with things that work. OK, he had a point.

Instead of upgrading the panel we swapped XM weather for ADS-B, and added redundancy with a TRW battery backup. These upgrades made sense, both financially and practically.

Fast forward nearly 1000 flight hours of uninterrupted, solid performance. One day in early 2015, GRT Avionics offered to buy back the Horizon I boxes if we’d upgrade to the company’s modern HX or HXr product line. The numbers weren’t bad, either. Best of all, we could keep the dual AHRS and magnetometers and reuse them with the new EFIS. The HXr box, with its remote-mounted radios and 10.4-inch screen made no sense for our panel, but, after measuring, it appeared that two 6.5-inch HX screens would fit, snuggly, in the basic footprint of the old Horizon I boxes. We blinked.

A few weeks later a box arrived from GRT. Why only one? It was prime flying season in our neck of the woods, and we really did not want to lose the use of the airplane for any significant length of time. For that reason we opted to upgrade the screens one at a time. It also gave us the ability to fly with our well-known Horizon I right next to the new HX, so that we could learn the new, all the while having the security of the old right there, just in case. (Turns out that manipulating the HX is so much like the Horizon I that this was really not a problem.) 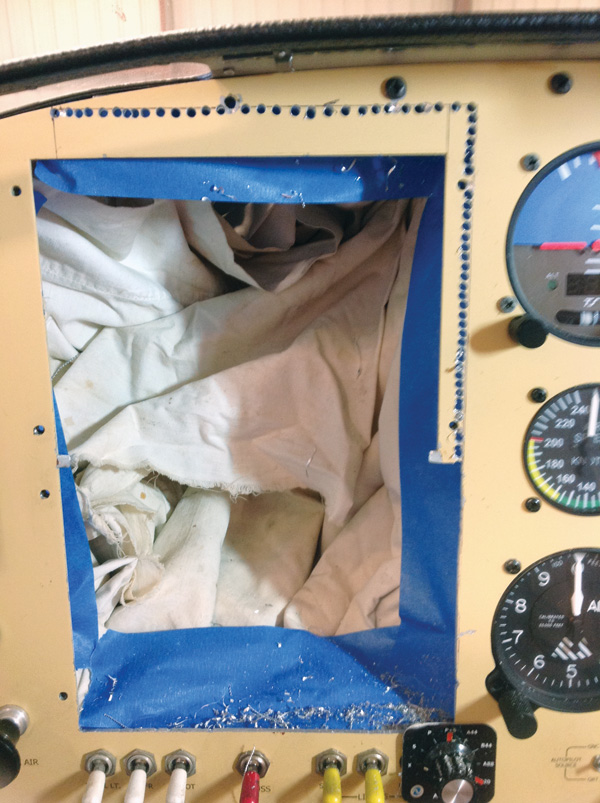 easure twice, cut once. Special attention was paid to capturing all the scrap metal.

Perhaps the most daunting part of the whole upgrade came at the very beginning—figuring out how to make the two HX boxes fit into the panel. Metal had to be removed. We did not want to pull the whole panel out; that would have had the airplane down for a considerable time. So my builder devised a method for removing the metal very carefully. He created a metal catchment system for any scrap material, to keep it from contaminating the area behind the panel. Wiring was carefully bundled and tucked back and a plastic drop cloth sealed to the backside of the panel.

He then chose his tools thoughtfully. Ultimately he settled on a drill and saw technique that, though slower, was less likely to spray very fine metal dust into the area behind the panel, the way a rotary saw might have done. (That dust is nearly impossible to completely remove, and can cause random shorts in your avionics that will drive you insane as you try to chase them down at a later date.) 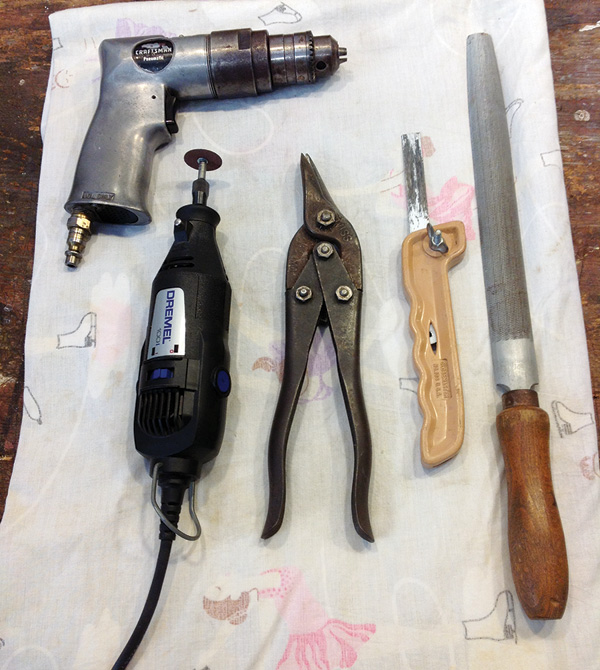 Tools used for slow, methodical trimming. Scrap metal was cleared as we went.

So, what exactly did it take once the panel was cut and the HX turned up on our doorstep? Less—and more—than we thought. GRT Avionics techs tell their customers right up front that these EFIS boxes are not really designed to be plug-n-play. Rather, they are designed to afford the user tremendous flexibility and capability. The HX sports a powerful processor, plethora of connection options, more software settings than I think even the techie-ist of techies will ever need (someone will refute that statement, I’m sure), and compatibility with a wide range of avionics and accessories from different manufacturers.

There are serial, Ethernet, USB, ARINC 429 ports, and more on the HX. With optional bluetooth connectivity, I can even use my Android smartphone to pre-plan flights and then upload them to the HX once I’m at the airplane. Want to set the radios or change that plan in flight? I can do that, too, with my smartphone. Not that I will (although the idea that I can do it without reaching over into the “captain’s” space is kinda fun to contemplate). There are so many choices for connecting and configuring the boxes (above what the Horizon I offered) that it may very well have been the most daunting part of the entire retrofit. Of course, to get that functionality you’ve got to set up the boxes. Deciding how to maximize the connectivity took hours of planning, combined with several calls to GRT techs for advice.

If you are considering installing GRT products in your panel, you need to be the kind of builder who doesn’t just read the install/user manuals—you need to digest them. The good news is that GRT techs are knowledgeable, capable and, the Holy Grail, available. Hallelujah.

Ours is a dual-screen setup, stacked, and it was designed for redundancy. We were nearly redundant with the Horizon I stack, but the boxes lacked enough ports to allow us complete redundancy. This was not a problem with the HX EFIS. Displays one and two are now directly linked via Ethernet. They are also each connected to both AHRS 1 and AHRS 2. That makes them dual-connected to the pitot-static system and magnetometers because each AHRS is connected to its respective magnetometer (see the diagram).

Modular components of the HX EFIS provide many paths to a redundant system. However, it’s up to the panel designer to ensure the electrons flow properly for ideal functionality.

Our AHRS units are separate; a dual-in-one-box system would defeat the plan. We have a dedicated avionics bay behind the baggage compartment in our airplane where you’ll find the AHRS mounted level with the lateral and longitudinal axes of the aircraft, their connectors facing aft, as per GRT specs. Large wiring conduits run beneath the floorboards and seats from the instrument panel aft. Our magnetometers have their own shelf in the avionics bay, safely set some two feet from anything that could generate magnetism, including current carrying wiring. The entire system is set up so that if a component fails, we can pull it out, box it up, and send it to GRT, and then keep on flying if we need to. The repaired or replacement component can catch up with us at the next destination.

Flying the Boxes— Was it Worth It?

Do you remember when you upgraded from an Intel Pentium CPU to the Core Duo or Quad-Core chip? Going from 2004 to 2014 technology in your avionics is a lot like that. The HX screens boot quickly and their animations and motion are smooth like butter. But even with all that, GRT Avionics has wisely kept the basic functionality of the soft buttons and knobs intact. I was worried that I’d need to learn a whole new EFIS software, but I did not.

There are, however, a few new tricks on the HX. The addition of terrain that is more map-like is welcome. I can even choose to depict actual sectional or en-route charts (for a database fee). Even geo-located approach charting is available if I want it. I don’t, right now. I have all that on my iPad for the moment. I also feel that weather and traffic show up better on the default terrain. It is a personal preference, and yours may differ from mine. I do find the HX’s high-definition screens, which are an inch or so larger than the Horizon I screens, are easier on my eyes.

Functionality aside, I love the new look of the panel. When we took to the air for the first time with the beast in 2008, we were thrilled to be in our hand-built, modern, general aviation cruiser. It’s satisfying to see it seven years later, all decked out with truly redundant high-definition EFIS units and know that it’s still a modern GA cruiser, and still all we ever wanted in a cross-country airplane.

Paul Dye - April 17, 2012
0
Countless modifications for homebuilts are available, but does that mean they're right for our projects? Paul Dye discusses the value of keeping things simple.