Well, I finally got up the moxie recently on a nice calm morning and took the Kitfox taildragger out to re-establish my 90-day currency. The book says three landings to a full stop, and that’s always a simple matter in the Kitfox IV. After all, our runway is 3400 feet, and the Kitfox needs only 300 feet for takeoff and the same for rollout, providing you’ve made a decent landing and not used the brakes. When I’m flying solo I routinely lift off in 100 feet from a rolling start. 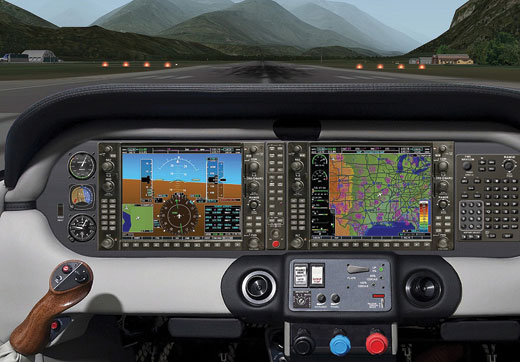 The flight simulator screenshot of a Cessna Corvalis panel. The flight characteristics of the Corvalis are similar enough to the author’s RV-10 to make for good practice. Also, it doesn’t hurt to brush up on Garmin 1000 skills (though there is little similarity to the GRT Horizon EFIS in the author’s airplane other than in the depiction of information).

The recurrency went so well that I took my first passenger of the new year up in the Kitfox shortly thereafter, on a somewhat breezier afternoon, and again the landing was a sweetheart affair. It’s always different when I have 200 pounds in the other seat of the Kitfox, as that is about a third of the total empty weight of the airplane. You need to carry significantly more power through the landing, and recalculate your flare based on your considerably different inertia quotient. That’s all part of remembering how to fly the airplane after a long winter break. 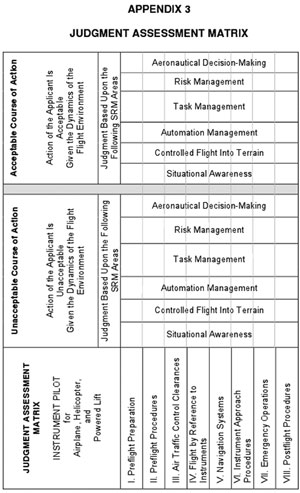 A rubric for FAA examiners and flight instructors to assess a candidate’s judgment skills when it comes to aircraft (from the Practical Test Standards for the instrument rating).

Once I’d tackled the Kitfox, I knew my next task was to get myself back into the left seat of our Van’s RV-10. It is one thing to go out by yourself in a lightweight machine with hardly any instruments to look at and remember how to fly it. It is something else altogether to hop back into a high-performance screamer full of sophisticated glass and redundant systems, and know what you are doing. After months of not flying, all of my highly perishable skills had acquired, well, a stench.

Let’s just say that you need more than a “flow” and a checklist to back you up when things go inoperative in the RV-10. Sure, you’ll remember to double-check critical items—flaps, trim, power (fuel + ignition + airflow + electrics), autopilot disconnect—but will you remember what’s on the emergency buss or the limits and operation of the standby alternator and how to activate it if you need it? Will you swap fuel tanks in the proper rhythm to avoid imbalance (or worse, engine stoppage)? Can you read the warnings and interpret what they are trying to tell you about any emergency you may encounter?

And how about that EFIS, GPS and autopilot? Will you remember how to program them while you’re busy flying the airplane and keeping it on course?

I can tell you that after two months of not really thinking about it, my skills had atrophied, and all the Kitfox time in the world was not going to fix that problem. I needed torture in the hot seat—the left seat—of the RV-10, with a qualified CFII in the right seat to oversee the structured reintroduction to my airplane and keep me honest. So I found one and went out for an IPC. 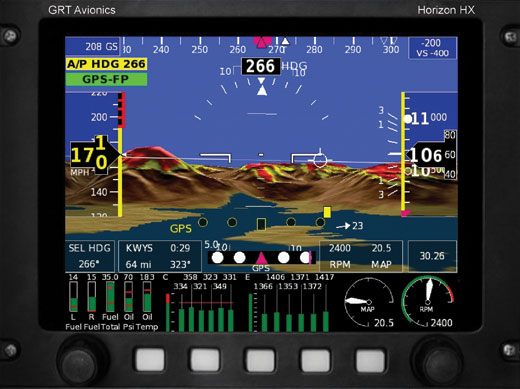 IPC stands for Instrument Proficiency Check and, yes, it is an official FAA term. The IPC is essentially an instrument checkride; you can find a “how to” guide listed in the Practical Test Standards (PTS) for the Instrument Rating (www.faa.gov/pilots/training/media/IPC_guidance.pdf), in case you are wondering where flight instructors get their crazy, tortuous ideas of what to throw at a poor pilot who is just looking to become recurrent as an instrument flier.

The check is designed to replace the basic currency requirements of performing six IFR approaches, navigation, tracking and holding practice logged every six months in actual or simulated IFR conditions, which is the FAA’s definition of instrument currency.

The view from on top of the cloud layer (or in this case, between cloud layers) shows that terrain is often a factor, even up high. A CFII will assess the pilot’s ability to use any terrain avoidance equipment available in the aircraft.

What skills will you be required to demonstrate? Obviously, you have to show you are capable of getting the airplane safely down through the clouds and lined up with a runway by performing successful precision and non-precision approaches. But there’s more. The PTS dictates that you’ll have to demonstrate a DME arc from a VOR, as well as navigate with all the instruments in the panel—and then with some of those panel instruments inoperative. You’ll have to take a spin in a holding pattern. And you will have to demonstrate the dreaded circle-to-land approach. 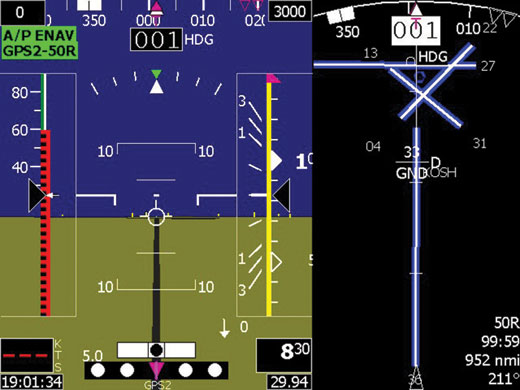 The GRT box makes simple work of an instrument approach, if you know how to push the buttons and twist the knobs correctly to set it up.

Mind you, I prepped. I spent an entire afternoon with ASA’s On Top IFR trainer software, which is an excellent and inexpensive PC-based procedures trainer. The Cessna Corvalis simulator provides performance similar enough to the RV-10 to be useful. I don’t go in for fancy accessories; an inexpensive Microsoft joystick (USB) with a throttle lever and trim buttons works fine. The program also integrates with a Garmin 430 simulator for GPS practice. It has real approaches, and you can even pull up approach plates for any U.S. airport. 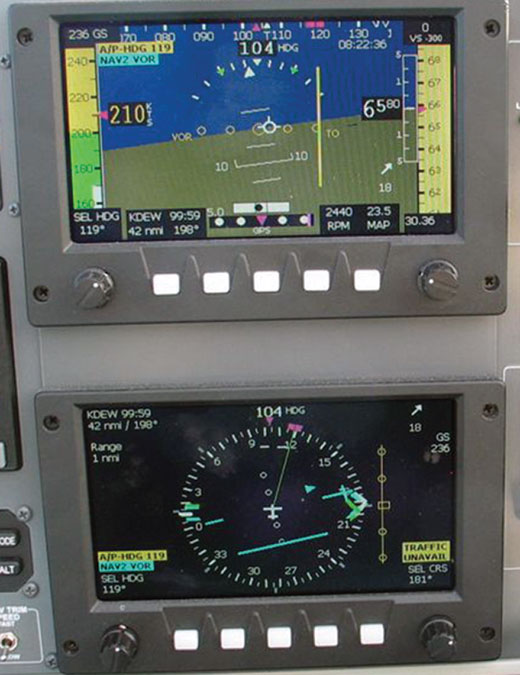 You must be in VOR mode to tune the ILS for an approach with the GRT setup in the author’s plane. If you’re still on GPS, you’re in trouble.

Using the procedures trainer helped remind me of the sequencing of events in the ATC system, and it certainly did not hurt to practice a couple of precision and non-precision approaches. I even programmed some failures that left me on the standby round instruments, and a bit of partial panel work (you’d be surprised at how challenging that can be when you haven’t practiced for a while). 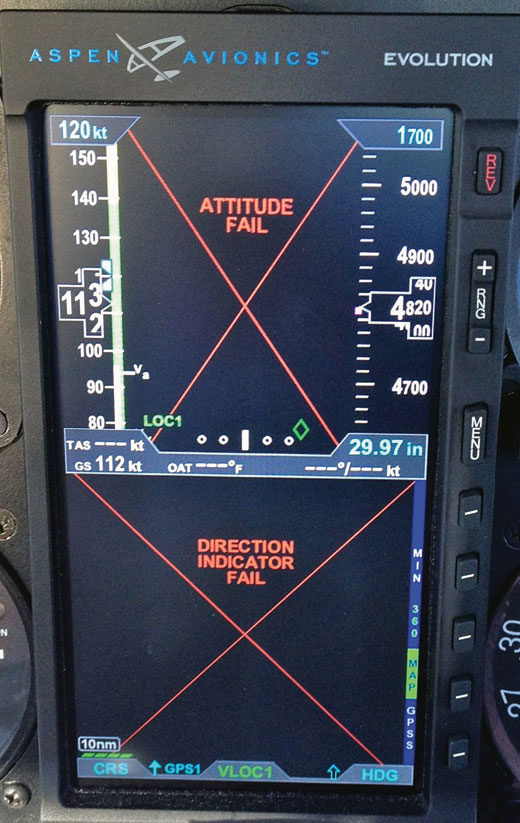 You don’t see a lot of partial panels with the new solid-state electronic flight displays, but if you did, it would look something like this.

The evening before my IPC I reviewed Sporty’s IPC DVD (you can get it as an app on your smartphone, I’ve since learned), and then took a look at my short notes on operating the GRT EFIS and the Garmin GNC 300XL. Each manufacturer employs a very different programming logic. I have a little electric auxiliary power unit I hook up to the RV-10 when I want to use the electrical system for any length of time on the ground. It allows me to practice programming flight plans, calling up standard instrument departures (SIDs), standard terminal arrival routes (STAR), and swapping approaches. It is so much easier to practice this on the ground before a flight. 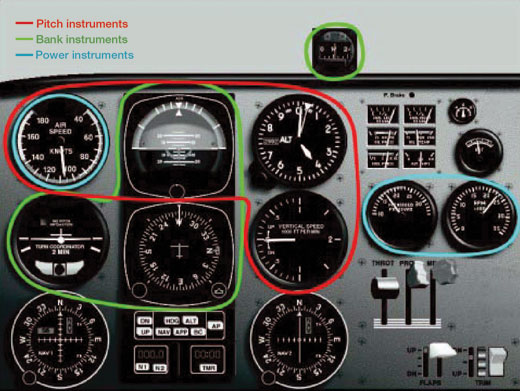 If you have analog instrumentation in your aircraft panel, you are probably looking at the world this way. Remember what the instruments are trying to tell you? Here is how the FAA wants you to think about it. 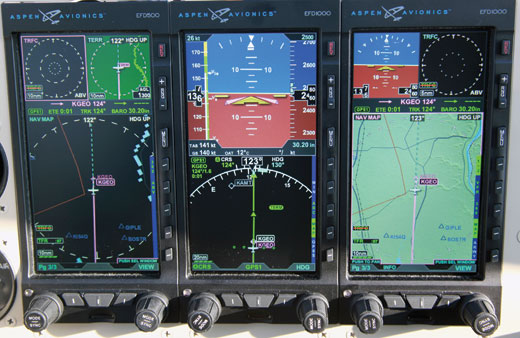 Today’s glass panels can be incredibly sophisticated. Here, three Aspen screens tell you everything you need to know about your position in space, as well as the health of your aircraft systems. The trick is in interpreting the information to safely comply with air traffic control in instrument conditions. 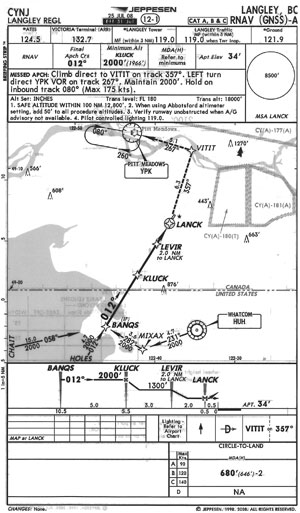 Some approaches are more complicated than others, so it pays to take time outside of the cockpit to review them. This one requires the dreaded circle-to-land skill.

I was ready for the real thing the next morning after an hour or so with the panel lit up. My CFII was creative, setting up a scenario that included a short cross-country to a neighboring airfield near a VOR, where we did a hold and an arc, then shot two GPS approaches followed by an ILS that required interfacing with fast-talking, fussy air traffic controllers in the nearby Class C airspace.

The bumpy, unstable air on the leading edge of a cold front made straight-and-level flight a bit of a challenge, but even an instructor-induced equipment failure or two did not force more out of me than a good sweat.

All in all I did better than I thought I would, and maybe that was the kicker. All of the brush-up paid off and left me familiar enough again with the systems that I could focus on flying.

My weakest link was predictably with air traffic control, because I hadn’t practiced in the system and I did not use an instructor when I was polishing up on the PC-based flight simulator. That’s really my fault, because I could have practiced just by listening with my Sporty’s handheld transceiver while riding around in my car between errands, which works to keep your head in the game. On my flight the controller gave me a poor intercept angle to final approach, and I was a little reticent to bank steeply in my simulated IFR, causing me to fly through the final approach and have to re-intercept the course from the other side. Yes, I know, there is a wide, white line right there on the screen and all I have to do is steer the airplane onto it, and yet…. The CFII felt I was now safe enough to go out and polish my skills, so you can be sure I’ll practice that one until I can negotiate it like a pro again.

What now? I owe it to myself to take a couple of good cross-countries this spring so that creeping fear of incompetence fades when I’m in the airplane. A little fear—the kind that keeps you honest about your ability to complete a flight safely—isn’t a bad thing, as long as it doesn’t grow into the kind that paralyzes you and keeps you from even trying to fly. Catch yourself feeling that springtime dread? Do as I did, and get yourself a good instructor to brush up with, and go fly!

It helps to bone up with a few key study materials, such as these DVDs from Sporty’s (also available through iTunes as apps for your iPad or iPhone). 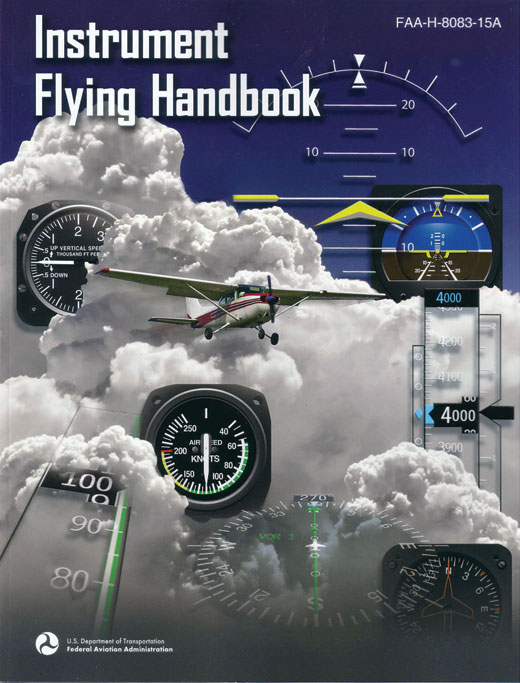 Old-fashioned-type pilot? Break out the latest release of the FAA Instrument Flying Handbook and review it before you go for an IPC. Everything you need to remember is in there, and now it’s in color. 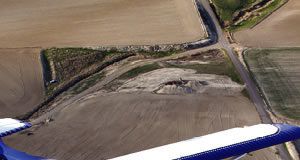