I have been seeing more and more comments on experimental aircraft message boards regarding letters, emails, and phone calls from the FAA regarding ADS-B issues. Pilots and aircraft owners are being contacted by a group at the agency when their airplane is flagged by the mysterious “system” as spitting out error codes or failing to pass muster in some way or another. I personally received a very pleasant phone call from an FAA inspector in Atlanta asking for my email address so that he could send me a report on one of my registered airplanes. He wanted me to take a look at the report and see what I could do about fixing the errors “as soon as I could.” 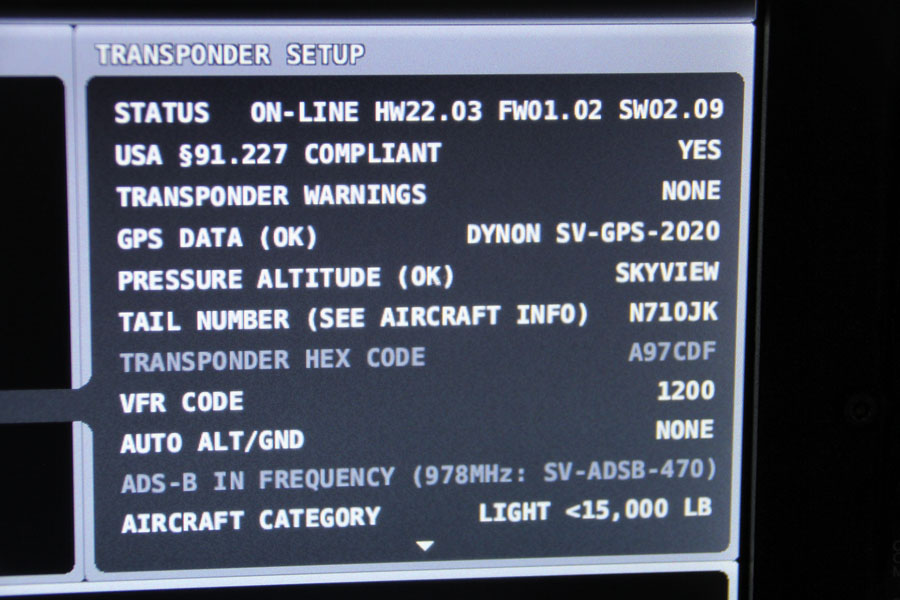 You can set the tail number for your transponder (through your EFIS) to anything you want—but are you being honest with all the other aviators out there?

My dealings with this particular inspector were friendly all the way down the line, and I actually appreciated the mild kick in the rear to make sure that my handful of airplanes was all up to snuff in the ADS-B world. It was a gentle reminder that January 2020 is just around the corner, and if you’re going to find major problems with your installation, it would be better to find that out sooner rather than later. I guess that as frightening as it can be to get a call from an FAA inspector, in this case it was nice to receive. But getting the calls to point out problems with your system is not what I want to talk about.

The interesting thing about these calls and letters is that a number of people have gotten them when, in fact, their airplane is not yet flying or does not even have an ADS-B Out transmitter installed. Yet they were forwarded a report that lists the performance characteristics of an airplane with their N-number. Clearly, the data came from somewhere, and that somewhere had to be an airplane—with the wrong N-number. And this points out a fundamental problem with the ADS-B system: It is all based on the honor system, much like all of our flying. Honesty and integrity are assumed in many of the rules that govern aviation—but they also seem to be diminishing qualities in today’s world.

In the end analysis, it probably doesn’t make a measurable difference in the aviation safety statistics if a person goes out to fly and doesn’t have a valid medical. In fact, in the few cases of pilot incapacitation accidents that you can find, almost all of the pilots had a medical—it’s just that on that particular day, they weren’t medically fit to fly. So the fact that there are probably people at your airport flying without a medical means that they are dishonest and doing something illegal. But it doesn’t mean that they are outright dangerous.

So in the ADS-B world, it is an easy thing to go into your transponder’s setup routine and key in the ICAO identifier or N-number that will be broadcast from that aircraft. Anyone can do it, and given that there are people who can hack any computer, regardless of the security measures in place, trying to build ADS-B boxes that don’t allow the code to be changed is probably futile. But there is nothing preventing a dishonorable person from keying in some random N-number—or one that they saw on their neighbor’s plane. This is probably what is happening when reports are generated by airplanes with no transmitter installed. Their code is either accidently being used or is being stolen so that someone can fly in the system without being identified.

(By the way, the system integrity level, the measure of how “good” your position reporting is in the ADS-B system, is also keyed in by the owner, making it easy to say that you have a solid system when, in fact, it is poor.)

Once this cat is out of the bag, it’s pretty much impossible to put back—unless all ADS-B Out transmitters are redesigned. It’s a fundamental flaw if you depend on pilots being honest, which is something I’d like to believe in. But more and more these days, I see pilots and builders looking for ways to cheat the system. Honor and integrity—which are fundamental to almost everything we do in aviation—are beginning to wane in our society. Sooner or later, we’ll all be flying in the Wild West, with pilots flying the wrong direction at altitudes or simply ignoring the right-of-way rules. Oh…right, let’s look at the 2018 arrival fiasco at Oshkosh, where some pilots pretty much ignored the NOTAM and the instructions of the ATC controllers—same thing.

The bottom line is that we have to first acknowledge that aviation rules are fundamentally enforced via the honor system. No one has ever asked to randomly see my medical before I launched into the blue, and no one other than me checks the paperwork on my airplane each year. We then have to recognize that if we allow others to defy the rules and strike out in whatever direction pleases them, we have no system, and we have no rules. We really do have to develop a culture that shuns outlaws—or we’ll have no law at all.

It could be argued that the reason we have ADS-B, and the fact that it identifies each aircraft uniquely, is because pilots have been breaking the rules, and this is one way for the FAA to know who is doing it. The fact that they designed a system to monitor pilots who break the rules but built it so that it is laughably easy to do so is ironic. So if you suddenly get a report that your LSA has been flying in and out of JFK and the FAA would like to talk to you about it, you’ll know that someone is out there spoofing the system. It will be interesting to see what the FAA will do about it—and I’m not sure we’re going to like it.

Marc Cook - December 17, 2008
0
Editor-in-Chief Marc Cook discusses the mood at the annual AOPA gathering, where he found an upbeat vibe, cautious optimism about the FAAs pending homebuilding rules changes, and a positive announcement from Glasair Aviation.