A lot of us carry a portable com radio in our flight bags, and we do this for a whole bunch of reasons. Sometimes it is convenient to sit in the nice warm pilots lounge and copy the ATIS before we climb into the (a) freezer or (b) furnace called an airplane outside in the elements. Other times it is convenient to call up departure control and get a clearance before firing up the engine. We can also use it to turn on the airport lights (PCL) prior to taxi. But by and large the reason most of us carry one around is that there is a finite probability that our kilobuck panel-mounted com radio will go south on us. 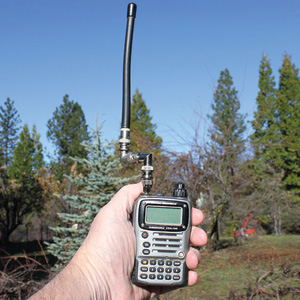 The handheld transceiver with the antenna in the use me position.

Most of our radios will fall into somewhere between these two limits, but what are the odds of that failure happening at night in the clag over some particularly pointy terrain? In my experience, those odds are pretty darned good. So we carry that second radio in our map bag, ready to get us out of whatever trouble the failed radio got us into. 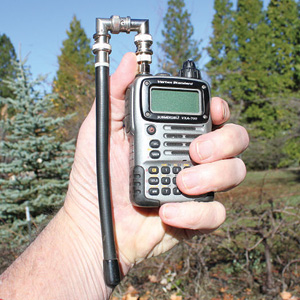 The transceiver in the carry position.

Almost. Every handheld Ive been acquainted with comes with a stubby black rubber ducky antenna. In the industry those antennas are almost universally called rubber resistors for the plain and simple reason that to get an antenna that small, some rather lossy matching mechanisms are used, with the result that nearly all of that transmitter power you pay Franklin bills to get is consumed in warming up the antenna, not in radiating a signal. 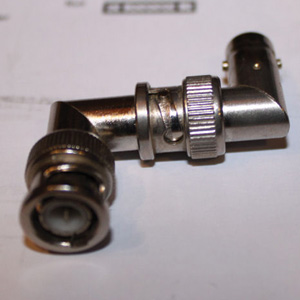 The configuration of two BNC right-angle connectors in a swivel arrangement.

About 20 years ago, the local amateur radio club did a test on just how much loss there was between a standard metal ground plane and a rubber ducky. We set up a sensitive receiver and standard antenna at one end of a football field, and an identical standard antenna with another ham and his handheld radio at the other. Simply switching from the standard antenna to the rubber ducky on the handheld cut the range of the radio by a factor of 10. That is, if the range of the radio had been 50 miles with the good antenna, it went down to 5 miles with the rubber ducky. Not only that, but by turning the person holding the radio with the ducky around in various angles, we could completely zero out the received signal at the test receiver.

But we who pilot airplanes have it worse, much worse. Unless you are flying a Pietenpol (the Termite Express) wood ship, you are inside of what is called a Faraday Cage. Funny thing about a Faraday Cage: All of the energy generated within the cage stays within the cage. And it really doesn’t make a lot of difference if the metal is solid (RV-6) or steel tubes (J-3); the effect is nearly identical. Your 5-mile range is now cut down a whole lot more. 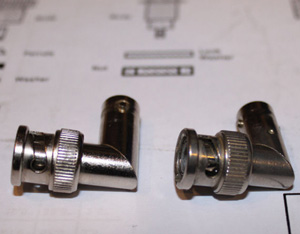 How much more? There are too many factors to tell. How much metal is between you and the receiver? Is there perhaps a plexiglass window you can talk out of? Are you in a turn? More factors than I care to fight.

Ah, grasshopper, let me solve your problem with a scant Jackson bill with a Lincolns worth of change back. We are going to use your regular outside com antenna with your handheld should the main com radio fail. We will also play some tricks with the rubber ducky to make it easier to use.

What we’ll do is break the coaxial cable between the aircraft com radio and the com antenna to install a patch panel. Under normal conditions, the jumper cable (white coax in the photo) connects the com radio to the com antenna with practically zero loss. When (not if) the com radio fails, you simply remove the coax from the antenna port, plug in your handheld and chatter away. 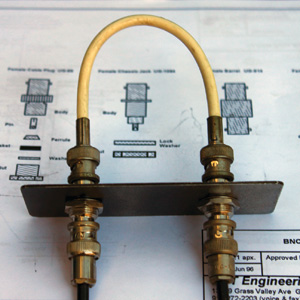 But wait a minute. That premade coax cable fell out of the map bag some months ago, and we failed to check if it was still there. Are we out of luck? Not a bit. It may not be convenient, and it may require some contortion, but that short coax jumper cable on the panel will work fine to connect the handheld radio to antenna connector B. Remember, this is not a normal situation, but what we might call an emergency.

Caveats? Don’t mess up and hit the transmit button of the aircraft com radio without it being attached to the antenna. And don’t try transmitting with the handheld into the com radio connector A. 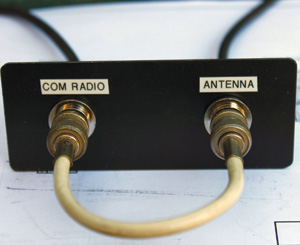 The faceplate of the patch panel. The labels are placed above the connectors so that the pilot can easily see which is which.

Now a trick if you really need to use the rubber ducky for portability. There is a variety of BNC connector called an elbow (or ell) that simply reroutes the path of the connector at a 90 angle. Two of them in series make a swivel connection that lets you swing that ducky out of the way when you are not using it, but lets you swivel it up vertical for use.

Where to get all these wonderful connectors? An unusual suspect: The Marlin P. Jones company (www.mpja.com) has BNC connectors for a price that nobody else I know of can touch. Ive seen those BNC bulkhead connectors go for $15 to $20 in some places and Marlin P. Jones has them for $3 apiece in onesy-twosies.

Stay tuned. It is going to be an interesting summer.

Square Ends on Round Tubes

David Paule - November 21, 2014
0
I like to use white melamine-faced particle board for my worktables. The tabletops are...