Two of the coolest upgrades you can do to an old-school machine are add a digital readout (DRO) and convert the step-pulley system to a variable frequency drive (VFD). Like many modern conveniences (smartphones, glass cockpits, etc.), no one really needs a DRO or VFD. But there’s no arguing that once you get used to them, you can’t live without them. 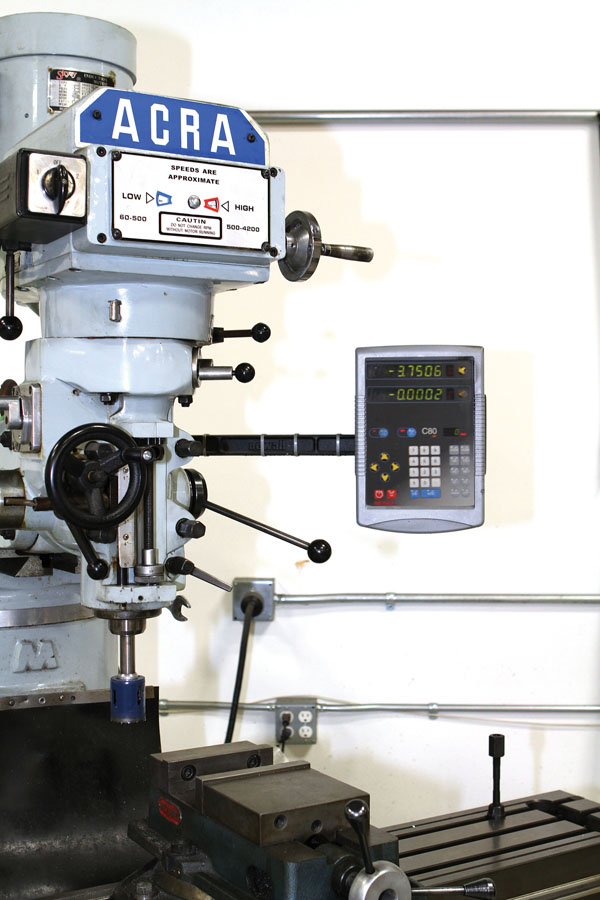 Until a few years ago, DROs used to cost a thousand bucks or more. Dropping prices and increased options have made DROs a practical option for the home shop.

At the high end, you can still spend $600+ on a system that includes glass scales with a machine-dedicated display. For example, a dedicated display for a lathe will have a variety of utility functions including, but not limited to, diameter and radius plotting, zero setting, taper turning and measuring, and tool offsets. A dedicated display for a mill might include utilities for plotting bolt-hole circles, arc contouring, line holes, and so forth. 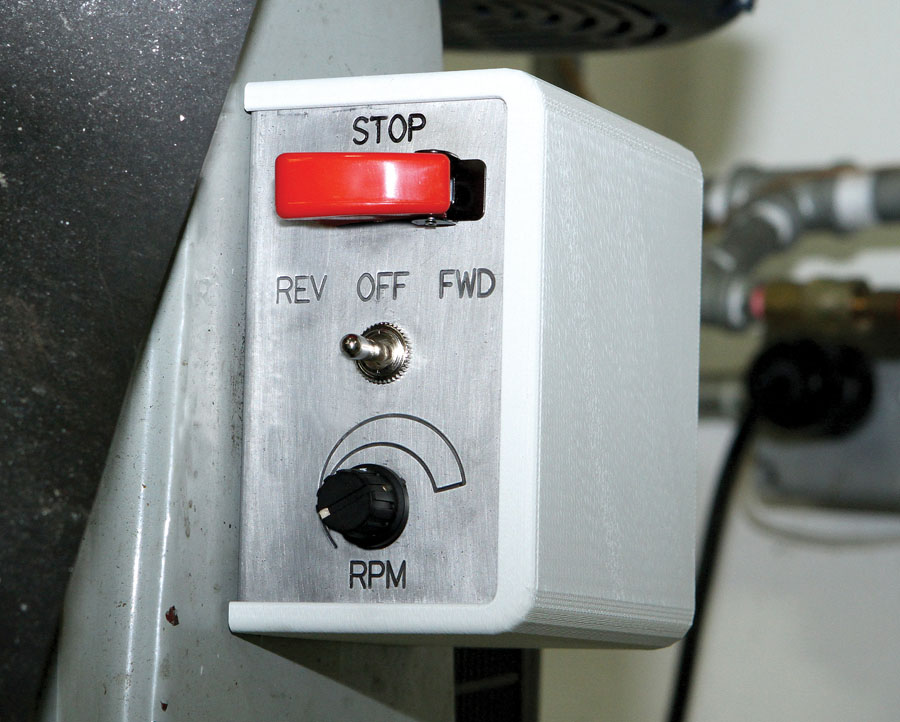 This is a typical remote panel for a variable frequency drive. Productivity gains come from a simple toggle and trim potentiometer to control spindle direction and rpm. This eliminates time-consuming gear swaps and/or step-pulley changes.

Mid-range ($200-$400) DROs are usually Bluetooth kits. Some require assembly and separately sourced scales. The display software will have the same lathe and mill features as the high-end DROs, and because they use standard Android tablets and communicate wirelessly via Bluetooth, you can position the tablet just about anywhere without worrying about routing and cable lengths.

At the low-end ($30-$200) are DROs that use inexpensive scales like those found on digital calipers. These typically have modular displays with only basic functions like zero setting and inch-to-millimeter switching. While you can work around those deficiencies when milling, on the lathe, where every job requires touching off and resetting the display or dials to the measured dimension, that is a big problem. 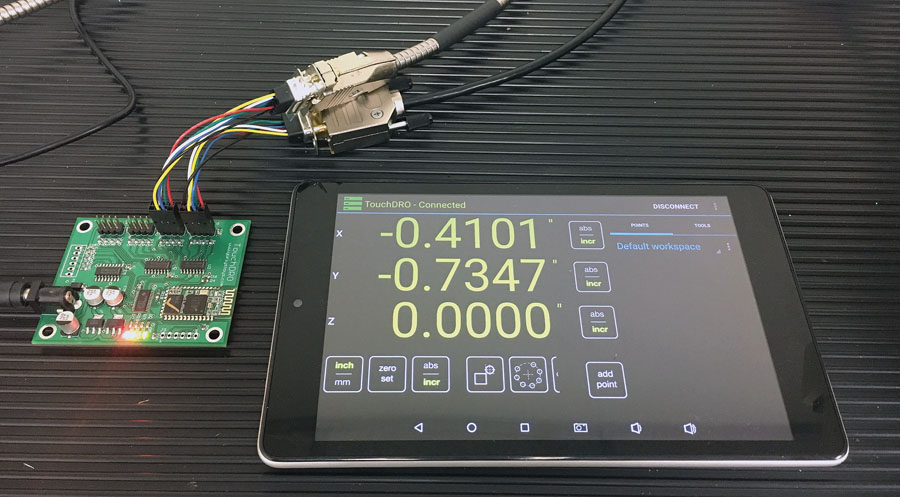 A $60 Android tablet communicating wirelessly with the Bluetooth DRO controller. The display is in the three-axis “mill” mode. Note the “hole circle” icon second from right, bottom row.

A couple of years ago, I purchased a $600 DRO Pros two-axis system for my 8×14 lathe. The instructions were straightforward, but since every machine is different, I had to do some figuring to determine the best installation. It took the better part of a day to unpack, sort out, and install the kit. But it works perfectly, and other than the ugly green case, I have no complaints. 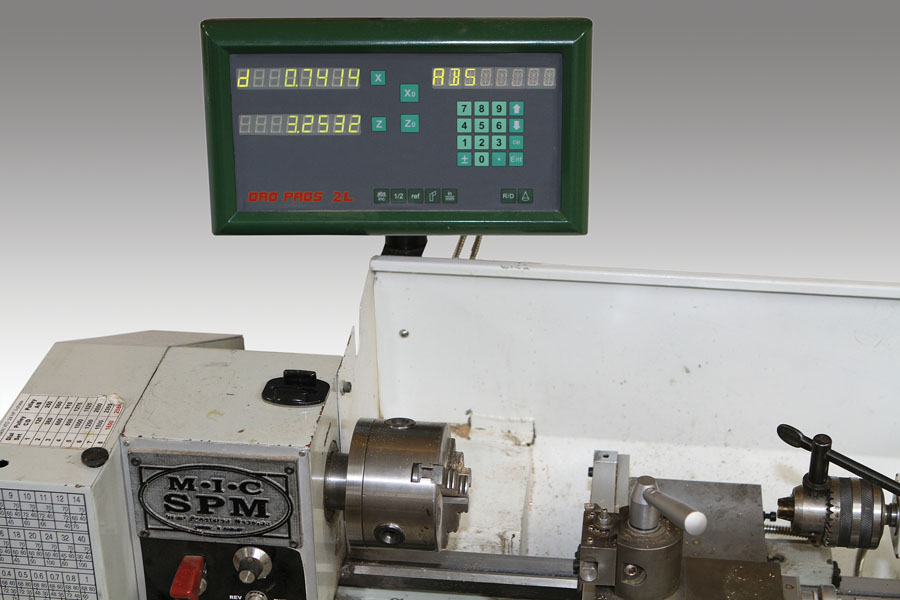 The DRO Pros two-axis system on the author’s 8×14 bench lathe.

One of the shortcomings of the mini mill design is the Z-axis speed handle rack and pinion drive is slaved to a small hand wheel having 0.001-inch graduations. The speed handle is for drilling, and the hand wheel is, ostensibly, for “precision” work. Unfortunately the linkage is rickety and not suitable for even semi-precision work. I scrapped that mechanism for a ball screw drive to raise and lower the Z and added a cheap DRO with a remote LCD readout. The Z-axis is now super smooth, and the readout makes positioning more like 0.003 inch instead of 0.030. 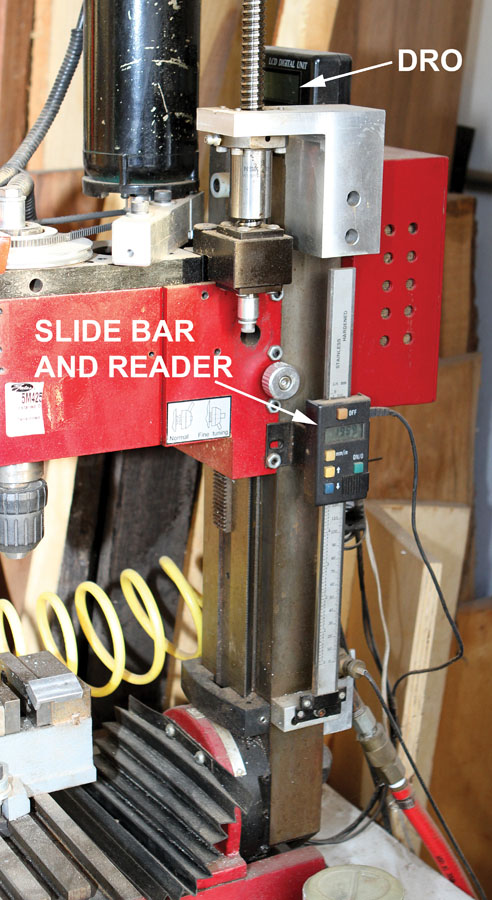 VFDs, like DROs, used to be exclusively industrial devices. Improvements in design and lower costs have made them practical for many non-industrial applications. More and more home-shop machines are being equipped with VFDs as a standard feature. The reason is simple: VFDs allow use of more efficient and powerful three-phase motors with regular household single-phase power. By using the analog input options of a VFD, the motor rpm can be adjusted simply by turning a dial and switching from forward to reverse by pushing a button or flipping a switch. VFDs eliminate having to swap belts from pulley to pulley or being stuck with a spindle rpm that is too slow or too fast. 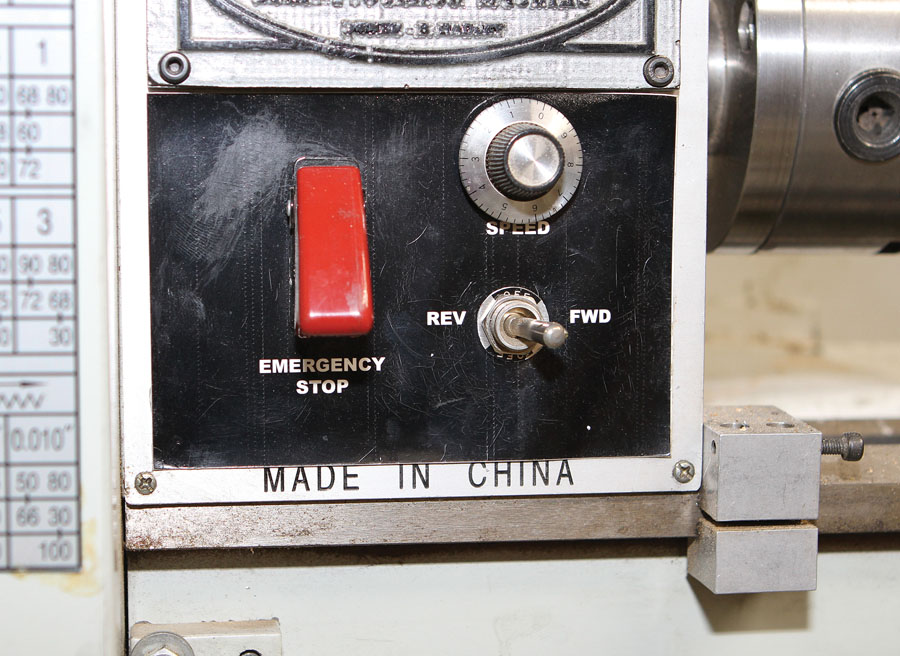 A VFD will allow hooking up a remote panel. The author’s bench lathe represents a typical analog setup. It has an E-Stop switch, a three-position on/off/on switch for rev/off/fwd directional control, and a rotary dial for zero-to-max rpm speed control.

It’s relatively easy to upgrade a single-phase machine to VFD. I’ve converted two lathes and a milling machine to operate on VFDs. While the VFD setup can cause some head scratching, the mechanical swap is usually pretty easy. 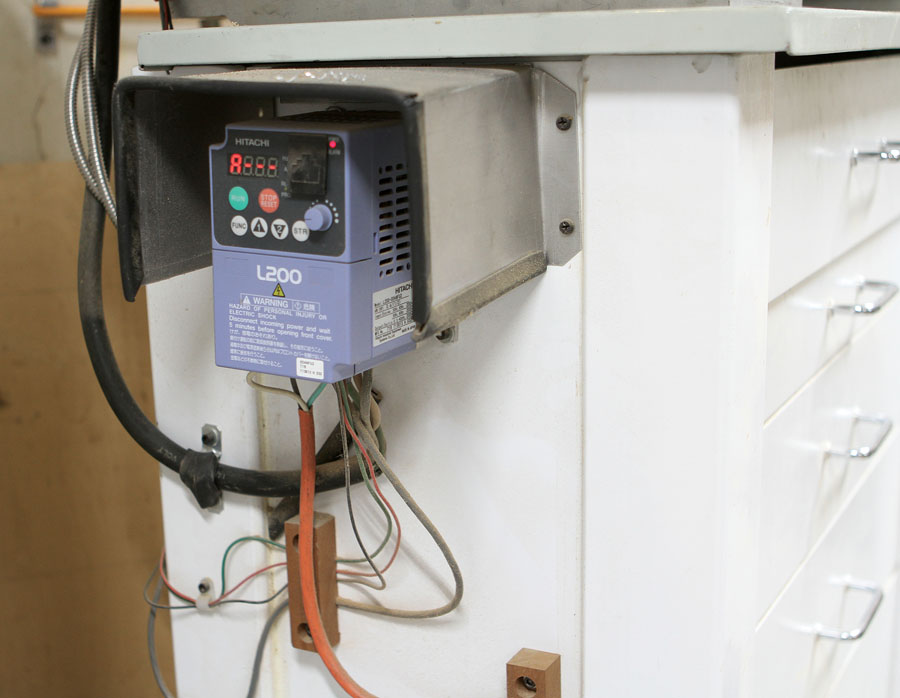 The blue box is the Hitachi L200 VFD. Note how it is mounted and shielded from potential machining debris.

On the knee mill I recently converted (a work project), I replaced the original 220-volt 1-1/2-hp single-phase motor with a 3-hp three-phase motor. I wasn’t necessarily looking to double the power, but the impetus for the project was a Huanyang VFD that my nephew gave me. Since it was rated for 3 hp, that meant I could use anything up to 3 hp. In the process of looking for a motor, I happened across a $950 Leeson motor for $99 on Amazon.

The only complicated part of changing motors is lining up the belt and pulley (or buying a new pulley if the old one doesn’t fit), and adapting the motor to fit if the mounts don’t line up (they usually don’t). 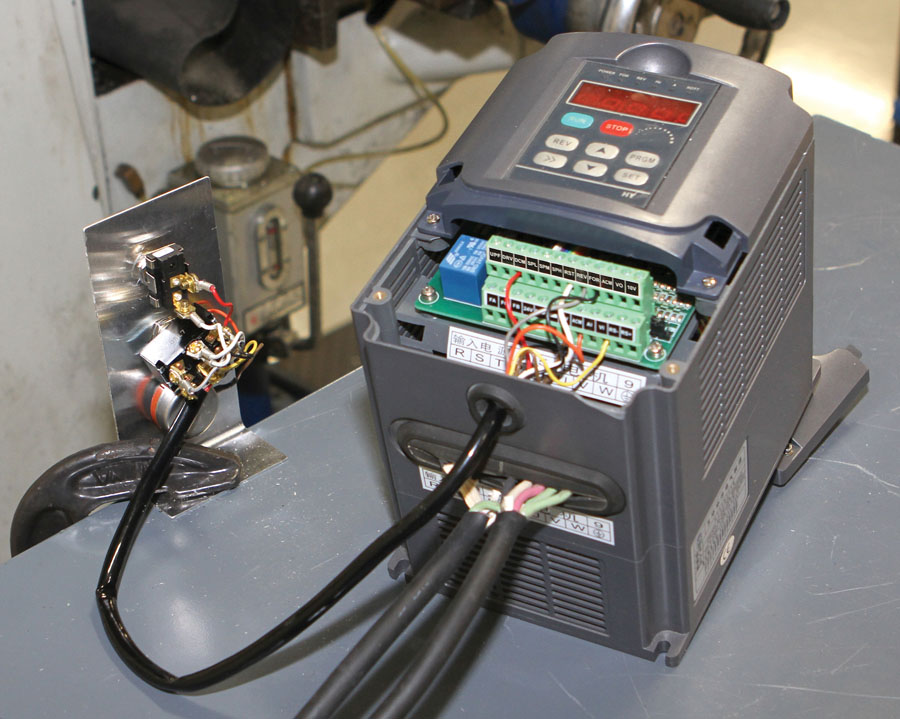 It’s more convenient to set the parameters with the VFD on the bench. Some settings are simple, such as the motor ratings for voltage, 60 Hz, number of poles, max current, and enabling forward and reverse, etc. Other settings, such as acceleration and deceleration, may need some fiddling.

If, like me, your knowledge of electronics is limited, then you can expect the process of connecting the VFD to be between slightly complicated to daunting. That, I’ve discovered, depends on the brand of drive you purchase. I had very little trouble figuring out two Hitachi drives. The same goes for the Delta Electronics VFD that’s on my Jet 1642 wood lathe. (I had to replace the original after 12 years.) Both brands provided excellent documentation. Granted, even though it did take a while to sort out the explanations and diagrams, all the connections and parameter settings worked as expected. 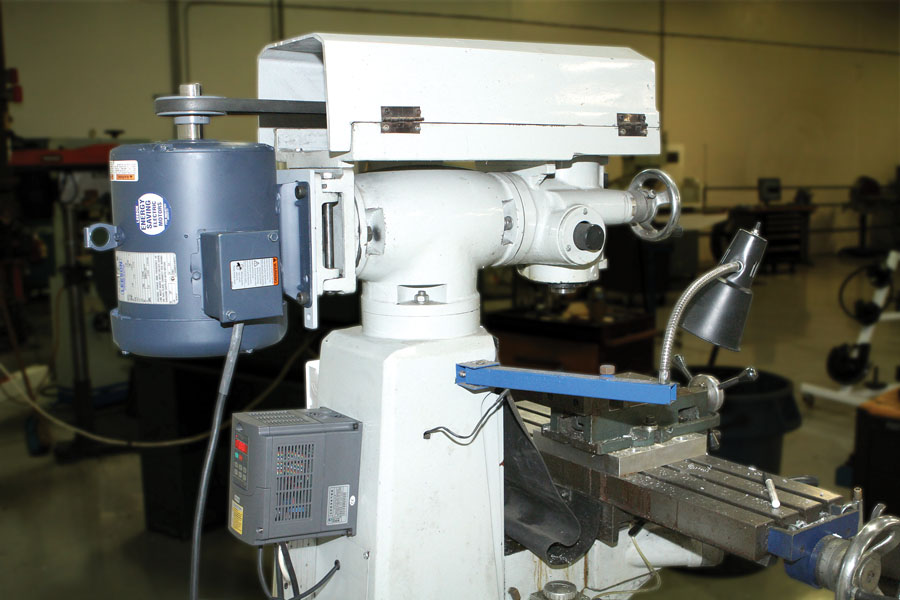 The final conversion with the VFD mounted on the back of the mill.

The Chinese-made Huanyang VFD on the mill at my work was a different story. The manual covered a number of different models, so I had to pay attention to which details related to which models. While it depicted wiring connections for analog input (my conversions are strictly analog input—in other words, manual off/forward/reverse switching and speed control via rotating potentiometer), it left a lot to be desired in terms of detail. Searching the internet turned up a number of other people with questions and problems trying to decipher the manual and figure out the settings.

In the end, I got the machine running but with one quirk: The speed control pot, which should vary the motor rpm from zero to max, reaches max rpm at 2/3 turn instead of a full turn. I have the correct pot (10k ohm) and have checked the output of the analog connections with a multimeter and everything’s good. It’s just, well, funky. 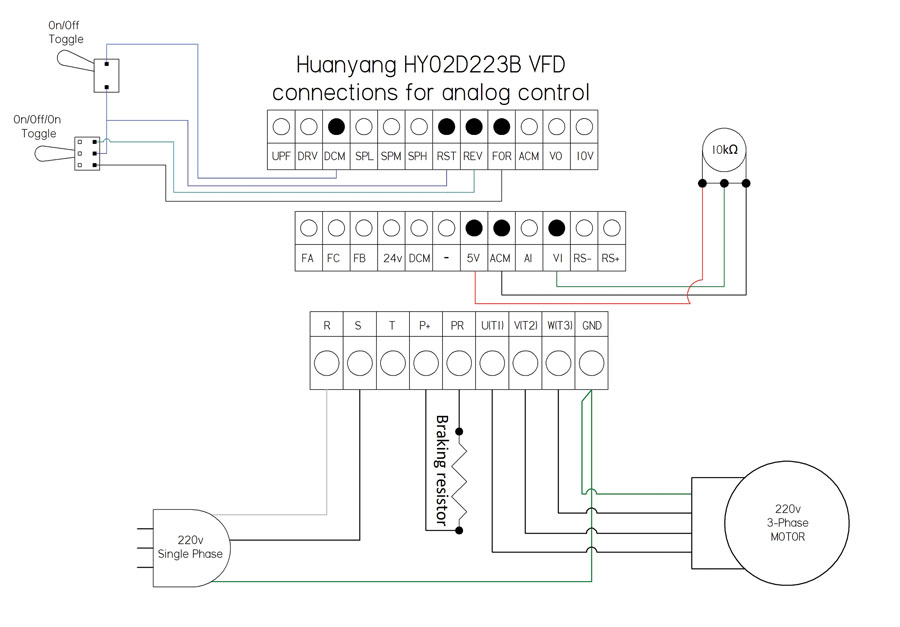 The author’s sketch of the wiring connections on the 3-hp Huanyang VFD. Although every VFD is slightly different, the general layout is the same. The unused terminals are for external computer control or monitoring.

Obviously, I’m not an electronics expert, but you don’t have to be one to connect wires, flip switches, and “program” a VFD. One thing I like to do is make a sketch that depicts the physical components and connections. I take it out to the shop so I have a better, more realistic view of what I need to do.

Here are a few things to keep in mind about motors and VFDs:

Use the internet to find blogs and chat groups that are using the same VFD. I’ve also listed some helpful links below.