When Brother Bell (Alexander Graham, that is) was doing his experimental work on the telephone back in 1875, he accidentally spilled battery acid on himself and the first words spoken over the telephone were his call for help, “Watson, come here, I want to see you.” History does not clearly record what Watson said back, but I’ll bet it went something like this: “Hi, this is Watson; I’m sorry I’m not here right now, but if you leave a message at the beep…” 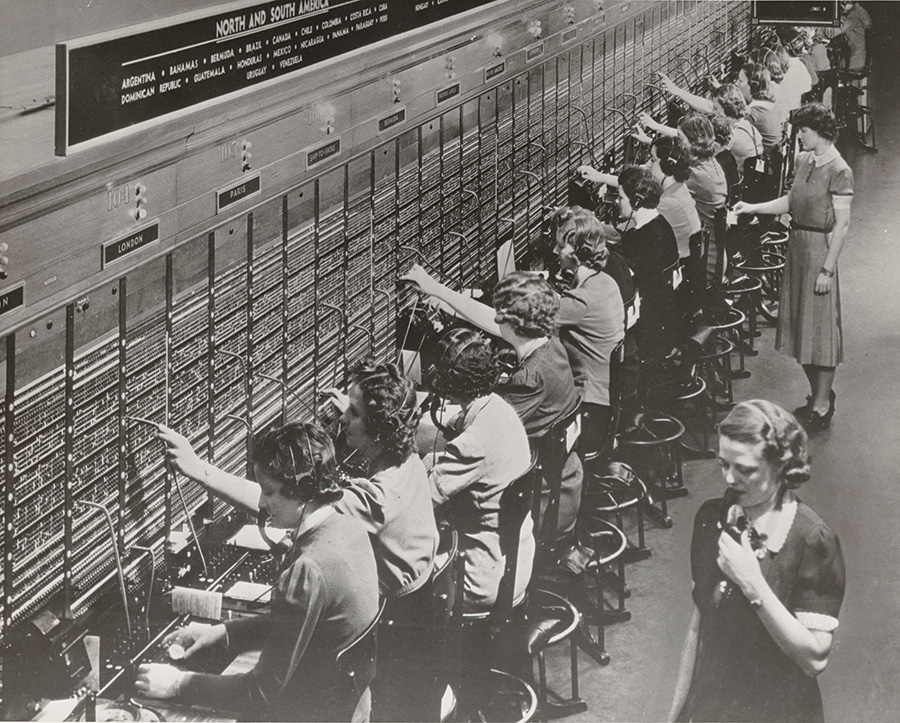 The source of the microphone plug used in civilian aircraft. This switchboard was typical of the tens of thousands such switchboards in common use by large companies from the 1920s through the 1950s.

Back in the March 2013 issue of Kitplanes®, I did a whole column on how aircraft headset circuitry worked. I also had a very simple circuit for go/no-go testing of the headset. That circuit was about the simplest thing I ever designed, and I’d like to do a brief review of that column and then launch into a two-part series on making a real headset tester. This design will not only let you do qualitative measurements, but the third iteration of the circuit will let you set the microphone level so that all your headsets will match one another.

Let’s do a short review of how headsets came to be what they are. Mr. Bell’s invention was the inception of how we turned voice into electricity, and the carbon sacks he used as variable resistors had somewhere between 100 and 300 ohms of resistance (depending on how you shook them, how you held them, and who was leading the National League at the time). Later work with the carbon (and its progeny, the dynamic and the electret) microphone standardized the impedance at 150 ohms with a nominal output of half a volt (500 millivolts) peak to peak.

The caveat here is that military microphones don’t follow the civilian rules. A lot of military microphones do not have amplifiers in them, and they standardized the impedance at around 5 ohms, with an output of roughly 50 to 100 millivolts. The question then becomes, can we convert a military headset for civilian use? Sure, given enough circuitry, anything is possible, and I just might do that in a future column.

But for now, let’s get back to the story. Bell needed just a little bit of sound pressure into his earpiece and found that a 300-ohm winding gave him what he needed. The first telephones used 150-ohm microphones and 300-ohm earpieces. However, when we went to use his invention on an airplane, we found we needed both ears covered if we wanted to preserve our hearing. The choice was to wire the left and right ear from Bell’s 300-ohm earpieces in series or in parallel. For whatever reason, the military decision was made to wire them in series (probably because the vacuum tube amplifiers of the day could more easily drive the higher impedance), which gave us 600-ohm headphones. From shortly after WW-I to about 1975, 600 ohms was the standard headphone impedance.

Then somebody had an earpiece open up on them, and just like the old Christmas tree lights that were wired in series, the entire headphone was dead. Rethinking the process (and now that we had the wonderful transistor that could handle the load), the standard became to wire the 300-ohm earpieces in parallel, giving us headphones with a 150-ohm impedance. And so we come to today’s standard headset with a 150-ohm headphone and a 150-ohm microphone.

“But Jim, the plugs…” Again, a sop to 1920s technology. Civilian aircraft plugs have a standard ¼-inch plug for the headphones, but a smaller diameter 3/16-inch diameter plug for the microphone. Why? Because all the telephone company switchboards from the 1920s to the present day use 3/16-inch plugs for their connectors.

If you will recall from that 2013 column, we made a headset tester using only the headset itself, a 9-volt battery, a 470-ohm resistor, and a 100-microfarad capacitor. Simplicity itself, and that schematic is reproduced here.The problem is that simply connecting the microphone to the headphone directly creates a lot of distortion. If we are checking for distortion rather than go/no-go, this isn’t the design that we should be using. 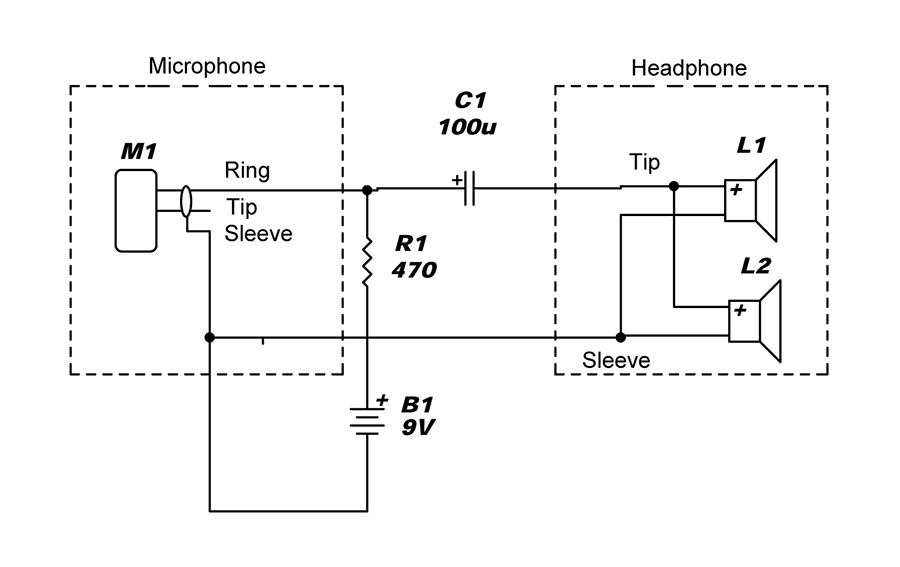 This is the original cheap and easy but limited-quality tester. 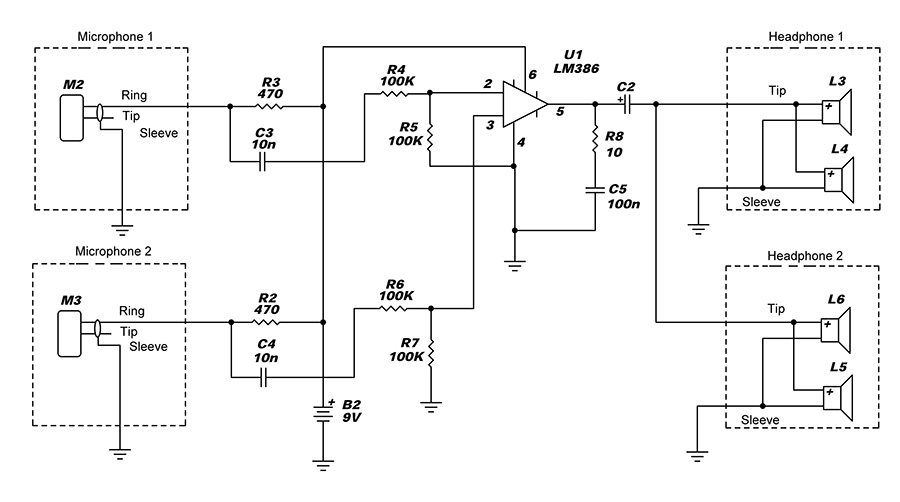 This is the new and improved “quality” headset tester.

Not only that, but I’d like to be able to have a second headset on the tester at the same time, so that I can listen and talk in comparison to a known good headset to the one under test.

Shucks, that’s pretty easy, too, especially for those of you who have been reading this column for a while. You know that I particularly love the little LM324 four-amplifier-in-one-chip device, but they came out with a single amplifier version of that device called an LM386 that drives power up to and including 8-ohm speakers. With a 9-volt battery, we should be able to get over 60 milliwatts to those 150-ohm headphones, and that amount of power that close to your head will ring your chimes. We will actually wind up toning that output down to something reasonable to listen to. 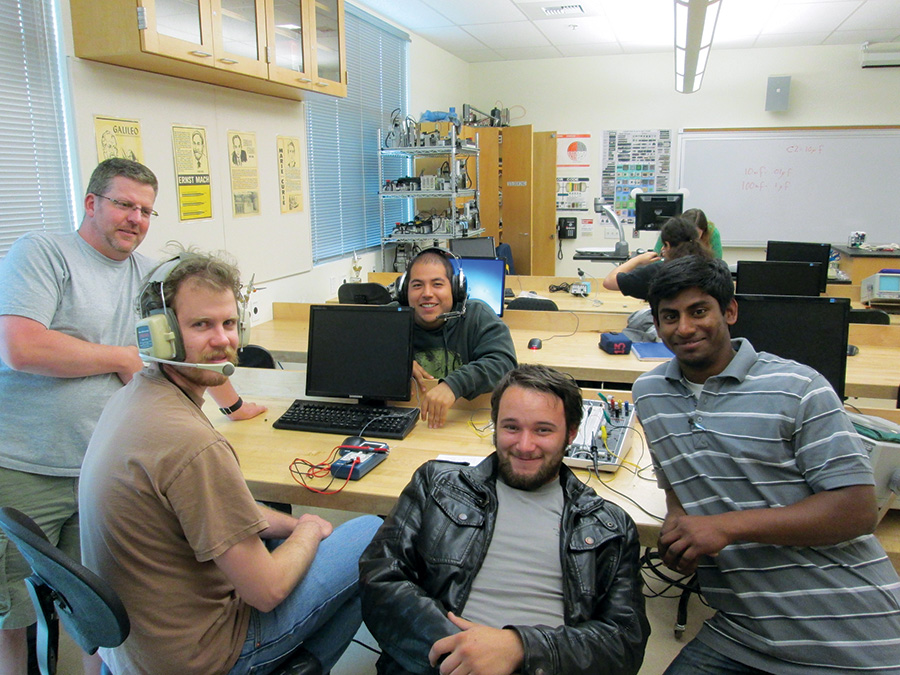 The author’s Sierra College Mechatronics class putting together and testing the advanced headset tester. The total time to construct the prototype board on the desk in the background was less than an hour, and it worked the first time.

Same bias scheme, but now we are going to be able to use small plastic capacitors to couple the microphone signals to the amplifier, as well as use much smaller electrolytic 10-microfarad capacitors from the output of the LM386 to the earphones.

That’s not bad. Another $2 worth of parts and we can now reasonably evaluate the quality of two headsets side by side. Next month we’ll come up with some super-spiffy stuff that will let us use either the little 9-volt battery or a regular 12-volt aircraft/automotive battery or power supply.