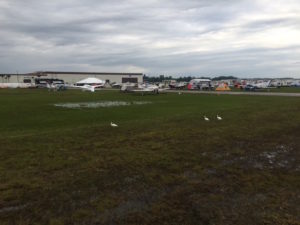 As Sun ‘n Fun 2016 draws to a close, I look back and realize that while the show was much like its many predecessors, there were actually a lot of times I looked and said “huh… that’s new!”  We flew four airplanes last week that you’ll see in the coming year for instance – and I think our other regular contributors found a couple on top of that. We saw the announcement of a new market for our experimental avionics makers – that market being all of  General Aviation ! Sure, the announcement by the EAA and Dynon that the FAA will allow the D10A to be used in specific Cessnas and Pipers might seem like a baby step – but that baby’s foot is now in the door, and its hard to see that the door won’t open wider. Why do we care? A bigger market helps those manufacturers fund development of even better products for all of us!
I picked up a new Talos ADHRS that connects wirelessly to the iPad to provide backup flight instruments, or primary flight instruments if you just need a little something in an inexpensive project. We’ll be taking a close look at the new Garmin aera 660 when our test unit arrives next week – look for more words on that. And frankly there were more cool toys from all the avionics firms that we’ll be looking at as well, and several aimed at the Day VFR market, which is great news for the majority of fair-weather fliers. We don’t all need to shoot Cat III approaches.

In the air? Well what about that interesting Russian project that looks a lot like a front line military fighter, but is powered by a Chevy engine driving ducted fans? 200 mph? I have someone looking into it.

As we put Lakeland in the rear view mirror and start to look forward to Oshkosh in July, we realize that this was a great year for Sun ’n Fun. The weather was superb, with sunny days and cool temperatures (ignore that little bit of rain n Wednesday night…ok?). We hope you enjoyed reading our team coverage as much as our contributors enjoyed bringing it to you, and we’ll see you all again when AirVenture kicks off in July!

Bill Repucci - May 18, 2011
0
How do aircraft judges at the big annual events evaluate a potential prizewinner? You might be surprised. By Bill Repucci.