N750MN took to the sky on September 10th, 2013 for her maiden voyage. N750HB followed on September 11, 2013. Mike Norton and Dick Booher, friends for 40 years decided to build a pair of identical planes. We spent just over 14 months building the two planes.

Both are powered by the UL Power 350iS 130 horsepower fuel injected FADEC engine. Engine monitoring and flight Instruments are provided by the Dynon D-180 Flightdek. Other equipment includes a Bendix King GPS, Icom A210 com and Garmin GTX 327 transponder. We also mounted an ADS-B receiver in the glove box for weather and traffic being sent Bluetooth to the panel RAM mounted iPad. The props are a new design composite three-blade by Craig Catto along with a spun aluminum spinner made by Allan Cummins in Australia.

We built the planes at home and transported them to the airport for final reassembly. This was the first build for each of us and we frequently assisted each other during various stages. I could not have completed my plane without Dick’s assistance and I am confident he feels I helped him occasionally.

We both have to thank our loving wives for their support and understanding during construction. Kudos goes to Zenith Aircraft for creating the simple kit as well as the endless factory support provided by Sebastian Heintz, Caleb Gebhardt, Roger Dubbert, Shirley, Joyce and Linda. 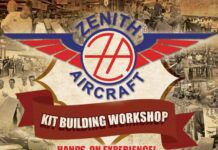