This brief series on welding, which has appeared over the last three months, has sparked a few calls and emails to Ken Scott and to the magazine. One response from Scott’s neighbor and sometime mentor Philip Groelz during the research for the articles provides an interesting insight into the choices available to us as amateur welders. Without further ado… 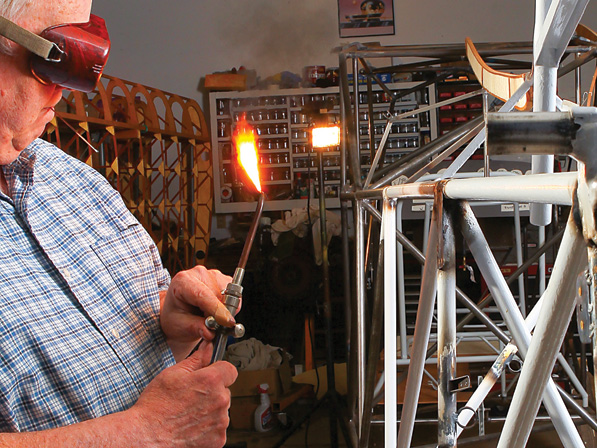 According to Philip Groelz, learning to weld with gas is somewhat easier; the method is more forgiving than TIG.

I’ve read Ken Scott’s series about learning to weld with interest. A little more interest than most people, I expect, because he is my neighbor, and it was my oxyacetylene outfit he used for that portion of his articles.

I’ve built a Wittman Tailwind, and I am currently deep into a Christavia (both welded steel-tube airplanes). I spent my working life as an engineer in an environment that included a lot of welding, some of it in quite exotic materials. I thought I might put in a few words about what my experience has taught me, especially in the continuing debate of TIG versus gas welding. 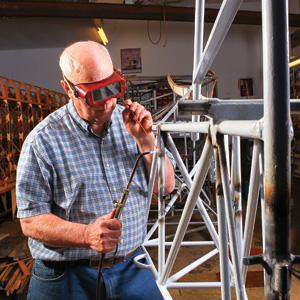 While gas welding is nice and quiet, almost relaxed compared to TIG, the result will likely vary more depending on the user’s skill level.

I was involved when EAA Chapter 902 started a Christavia project, and we were able to take several individuals who had no aircraft welding experience and help them progress to where they made satisfactory welds on the project. I don’t think we could have done that with TIG. The initial learning curve is steep enough that they would have dropped out before they had learned to make acceptable welds on the thin-wall tubing. One of the reasons I counseled the use of gas welding for a chapter project was my own learning experience. While I was learning to weld, I watched Larry Jensen using a gas welder to make the kind of welds that should be on display instead of hidden behind sheet metal and fabric (two of Jensen’s Cassutt projects later raced at Reno). The softer, quieter gas flame was easier to observe while he was welding, so it was simpler to grasp what he was doing and apply it to my own efforts. I used gas welding on my Tailwind and was quite satisfied with the results.

But I later worked with welding engineers, and they preferred TIG. When I asked why, one of their first answers was “consistency.” Welding engineers operate in an industrial setting or in research and development, and much of their work involves resolving welding problems. With gas welding, the quality of the end result literally is in the hands of the person making the weld. Trying to gather data or information about welds, you have to trust imperfect and incomplete descriptions from welders who aren’t entirely sure just what they’ve done or how they’ve done it. How hot is “sort of cherry-reddish” anyway? With TIG, you can record the volts and amps while the weld is being made and learn a lot by charting the data. You can also exactly repeat the settings on the equipment and expect consistent results. 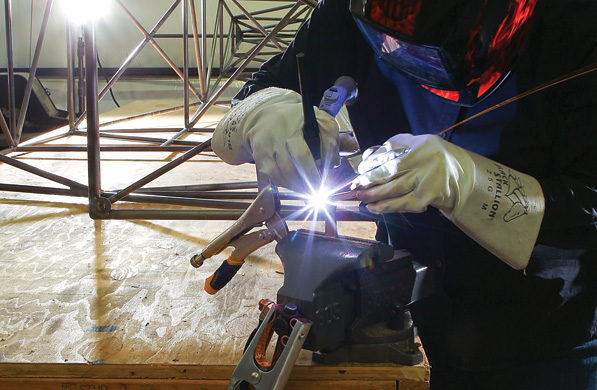 One advantage of TIG welding is reproducibility—many of the variables are easier to quantify than they are for other methods.

These engineers also mentioned that there are large families of metals that can be joined with TIG that would be impossible to weld with gas, though that might not be a big concern to those welding up homebuilt airplanes. The 4130 chrome-moly tubing used in aircraft is very forgiving and easy to weld—at least compared to many other metals.

They also seemed to think it was safer. Acetylene is combustible over a wide range of concentrations. Businesses supplying the gasses discourage customers from transporting the cylinders in automobiles. And, of course, insurance companies are not fond of learning that their client has a gas welding outfit in the garage. (The 15-gallon gasoline tank in your car is OK, however.)

After the Tailwind was done, I had a chance to acquire a TIG welder and spend some time learning to use it. Learning to make good welds certainly took me a little longer, but in the end the results became as good as or better than those I got from gas.

I also found that home TIG setups had come down in price, and did not cost significantly more than a gas rig. So my recommendation is: go with TIG and take the extra time to learn to use it skillfully. Gas has served us well for a long time, and will continue to do so. But now technology has given us something better, and the reward for taking the time to learn it is more consistent welds and straighter structures.