Last month we saw how the pitching-moment characteristics of the wing of a trike affect the stability, control, and safety of the machine. Another critical design parameter for trikes and similar weight-shift controlled aircraft like hang gliders is the vertical distance between the aerodynamic center of the wing and the center of gravity of the rest of the vehicle. This vertical offset between the wing and the majority of the mass of the aircraft is essential to the control of the machine.

A conventional airplane is controlled by changing its aerodynamic shape by deflecting control surfaces. This shape change alters the airflow over the flying surfaces and generates aerodynamic moments that trim and control the airplane.

A trike pilot cannot change the aerodynamic moments generated by the wing directly, since there is no mechanism to change the shape of the wing in flight. Instead, by moving the control bar, the trike pilot can alter the fore-and-aft position of the mass of the pod and its contents relative to the aerodynamic center of the wing. This changes the moment generated by wing forces around the vehicle’s center of gravity.

The vertical distance between the wing and the pod is what makes this possible. It provides the pilot with control, but as we have seen in previous months, it also makes the variation of pitching moment with angle of attack very nonlinear. Accordingly, the choice of mast height is one of the major decisions facing the designer of a trike. 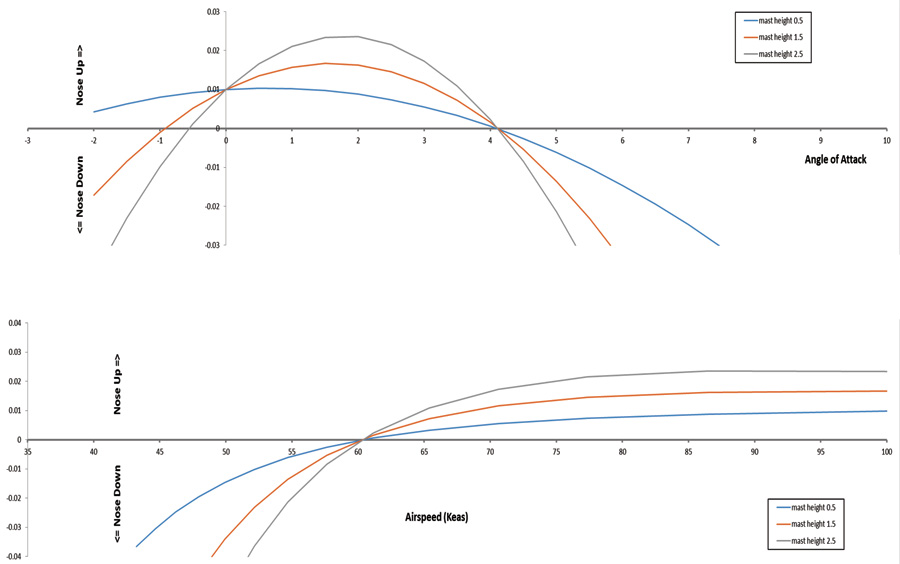 Some of the considerations are not related to stability and control. A trike wing pivots in two axes. Although we have confined our discussion to the pitch axis, trike wings also pivot laterally to provide roll control to turn the craft. The designer must ensure that the wing does not foul anything at its maximum travel in both axes.

In the roll axis, tip clearance from the ground is the primary concern. The pilot must be able to make full-throw lateral inputs to the wing right at touchdown or takeoff without fear that the wingtips will hit the ground. The static clearance must take into account a situation where the aircraft touches down with some bank angle and hard enough so the landing gear is deflected upwards to absorb the landing shock.

Mast height affects both the stability of the machine and the control power the pilot has available to fly it. To get a look at these effects, we will return to our example trike airplane and look at variations in mast height.

Figure 1 shows the pitching moment vs. angle of attack curves, as well as the variation of pitching moment with airspeed, with the bar fixed at the trim position for 60 knots for three different trikes. All three have the same wing and the same gross weight. They are identical except for the mast height. Three mast heights are shown: 0.5, 1.5, and 2.5 times the mean chord of the wing.

Looking first at the moment vs. AOA curve, we can see two significant effects of mast height. As the mast gets taller, the trike is more stable about its trimmed airspeed, as is shown by the steeper negative slope of the pitching moment vs. AOA curve.

Increasing mast height also makes the curve more nonlinear and causes the trike to become unstable more quickly as AOA is reduced below the trim point. Notice that the highest mast (2.5C) vehicle becomes unstable at angles of attack below about 2 degrees, while the lowest mast (0.5C), although it is less stable at the trimmed AOA, retains positive stability all the way down to zero AOA.

Looking at the curve of pitching moment vs. airspeed, we can see the effect of the more-stable behavior of the high-mast aircraft around the trimmed AOA. The high-mast machine will have a much stronger tendency to stay at its trimmed airspeed (higher speed stability) than the configurations with shorter masts. 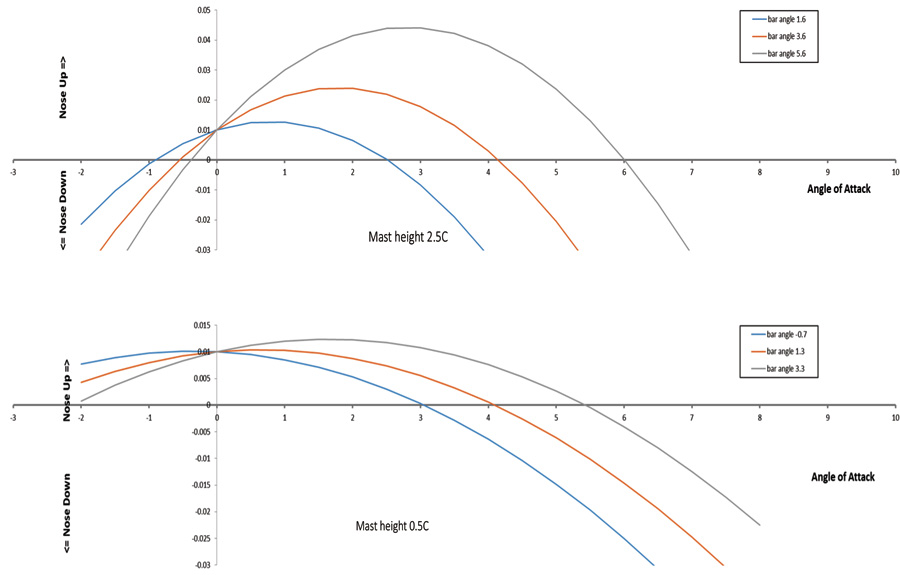 In addition to affecting the stability of the trike, the height of the mast also affects the amount of control power the pilot has. This is illustrated in Figure 2.

The figure shows the effect of moving the control bar of the highest-mast and lowest-mast example trikes over a total of 4 degrees. Curves are shown for the control bar position for trim at 60 knots, as well as bar deflections of + and – 2 degrees from that trim position.

The low-mast configuration only gets about 2.5 degrees of trim change for the same angular travel of the control bar.

In summary, the designer of a trike must trade the more linear stability characteristics and tolerance of lower angles of attack of a short mast against the greater speed stability (at cruise) and greater control power of the high-mast configuration, once the design has a high enough mast to provide sufficient clearance for the wing from the ground and the propeller. Looking at modern trikes, it appears that designers are favoring the higher mast. As long as the craft is never likely to be flown fast enough or aggressively enough to be in danger of being driven into the unstable region of low angles of attack, the higher speed stability and control power of the taller mast seems to be preferred.

Extreme examples of the high-mast concept are powered parachutes and paragliders, although the mast is replaced by cordage. The pilot and cart (if there is one) of a powered parachute or paraglider are suspended far below the wing. This will give it huge speed stability. Given the pilot’s very limited ability to “tilt” the wing by pulling on the risers, it produces a machine with a very small speed range that is very speed-stable about its built-in trim point.

Regardless of mast height, no trike or similar weight-shift-controlled aircraft should ever be operated in such a way that it will experience zero or negative G in flight, since its ability to recover is likely to be very limited or nil. Obviously, powered parachutes and paragliders cannot fly at negative G, and recovery from a wing collapse due to a down gust is a significant concern for them.