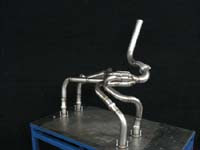 One thing I knew would happen this annual: The pesky, albeit very small, exhaust leak that I found at the last oil change would get fixed. My motto: Never ignore exhaust leaks, no matter how small. Some background first. My Glastar Sportsman has a very early prototype Aircraft Exhaust four-into-one system that was mocked up through the company’s innovative PVC-pipe routine. (Look for a story in the July issue of KITPLANES for more on this process.) Considering that my Sportsman was the first to get the IO-390, and has the more challenging nosewheel configuration, the system has been extremely good. As in durable, with generally good fit and finish—far better than many certified systems I’ve seen—and a great throaty sound. 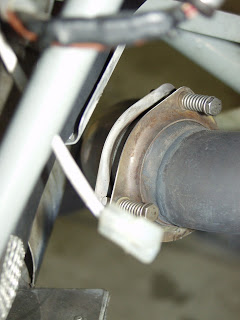 To accommodate the nosewheel structure under the cowling, the system has to make a near U turn. Adding this bulk to the already hefty stainless-steel system means that it’s just too much to hang solely from the exhaust flanges. But in the Sportsman the easiest method is to locate the tailpipe by the belly of the airframe, which in turn means that a ball joint must be used to allow relative movement of the two segments.

And, on my installation, this is where the leak started. (See the photo at left.) Note the white staining between the two flanges. This told me that the leak was occurring during cruise flight, not just during startup, when you’d expect that the two pieces might not fit tightly. (If that were the case, I’d expect the exhaust to be darker, because I routinely run lean-of-peak EGT in cruise, but can’t do so on the ground or the engine would idle too raggedly.) What’s more, I could see the exhaust stains on the heat shield that protects the engine mount in this location. Obviously, something had to be done.

With the collector off the airplane, it became apparent that there was an inherent misalignment between the two halves of the ball joint. Naturally, with some wear and tear over two years and more than 300 hours, you’d expect the clearances to open up. Assuming that something could be done, I sent the bottom half of the system—just the collector and tailpipe including the ball joint—back to Aircraft Exhaust for inspection and possible repair.

I have to say that the service was superb. AE’s Rich Lopez took in the old parts, had them inspected and then cleaned up. When I asked him if it would be necessary to change the ball joint angle, he said no. “The ball and bell seat real well…it will be a solid seal. I think that the problem is the amount of torque that is applied to the bolts.” To remedy that situation, Lopez said he would include new-spec bolts and stronger springs. Total cost was $60 including shipping back to California from Minnesota. I had spent about $25 to get the parts sent there originally. 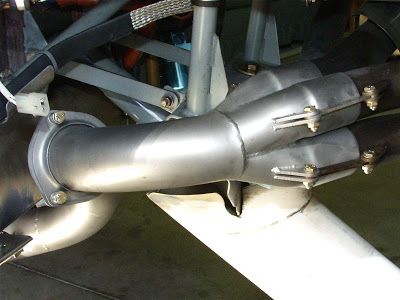 When the system came back, it was gorgeous. All the pieces had been bead-blasted, and the tailpipe portion was polished. Very nice. Also, the hardware was new, with springs about half the length of the previous items and shorter bolts. Too short, in fact; I had to substitute AN3 bolts two dash sizes longer to have enough threads showing through the all-metal locking nuts and not bend the flange. It seemed prudent to give the overlaps a bit of high-temp anti-seize just in case, though the system came off without protest. In all, I have perhaps two hours’ labor in this project, not including shipping to and fro.

The reinstalled system looks so clean and tidy; too bad the pipes won’t stay this shiny after the engine has been run.

Oh, and I found a few more items in need of attention ahead of the firewall, but this was, I thought, the big one. Better yet, it was easily managed at the beginning of the annual so that the travel time—parts go out, get inspected, come back—would not hold the signoff hostage.

More on the annual coming up.

Jim Weir - July 19, 2008
0
Columnist Jim Weir puts two, two, two LED lights in one hole, angled to ensure the maximum nav light visibility in any direction. He explains how to put the system together and explains why heat matters.