Ever notice how your house looks different when company comes over? Me too. Day in, day out, the headset and logbook in the middle of the living room are invisible, like the old cylinder at the end of the garage or the micro and resin stuffed on shelves next to the laundry detergent.

Of course there is the usual family stuff bulging from the storage areas: the boxes of “Xmas lights” and grandma’s furniture piled in the corners. And in my case, books, magazines, brochures, notepads, race programs, camera gear, and the mountains of Common Core math papers contributed by my school-teaching wife. Weyerhaeuser should feature us in their annual report. 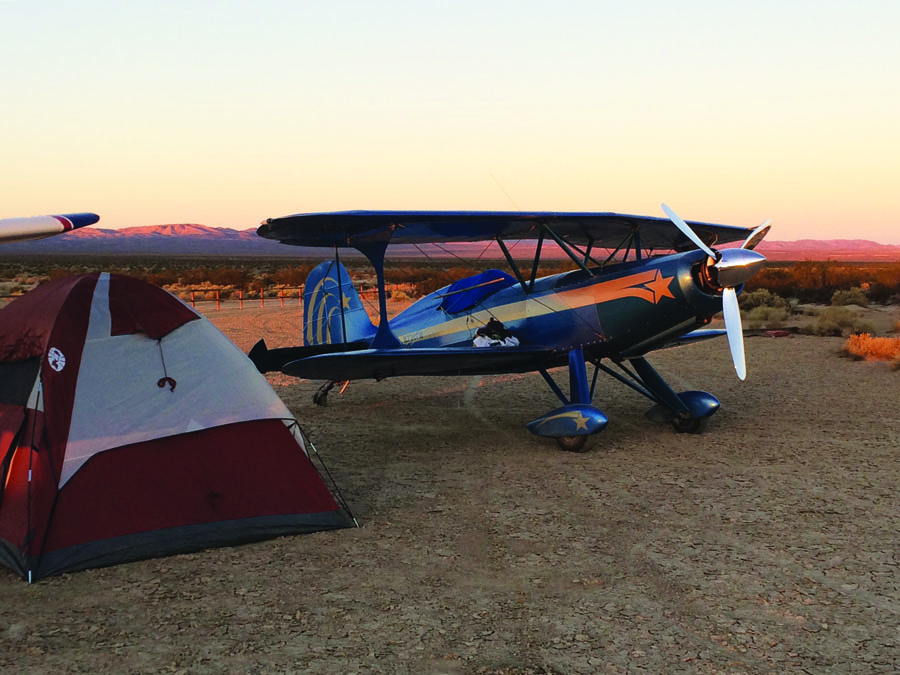 Boring holes in the sky in search of a better arugula salad offers only so much satisfaction. Tossing a tent and sleeping bag in the plane and heading for the boonies is a totally different experience.

Now, spending nearly every waking and sleeping moment in the house—I work as well as eat, sleep, and change oil here—the surroundings simply fade to gray. Familiarity has dulled critical thinking so the aerial enthusiasm mixes seamlessly with the domestic terrestrialism. As with any hoarder-in-training, I can navigate these shoals of effluvium in bare feet, in the dark, and not stub a toe. But have the UPS driver ask to use the bathroom, and suddenly I realize I’m living in a mountain of disorganized junk. Via imagination, I see it for the first time through the driver’s eyes and am ashamed amazed.

And so I recalled a few weeks back when the brand-new private pilot in the household—our oldest son—remarked that the only thing in all those new-to-him aviation magazines and websites he was now reading was safety, safety, safety. Amid a few features on magnetos and other technical avant-garde are gallons of ink exhorting us to greater vigilance and sober rationalism.

It’s hardly the stuff to fire youthful imagination. Not that primal enthusiasm for motion needs any speeding up around here.

This boy’s dad raced and spent what passed for a career testing the latest go-fast automobiles. Decorated helmets lined the hall closet, and multi-layer nomex driving suits were in the wash. Eight-cylinder cars without superchargers were considered mundane, and red Italian cars with prancing horse emblems have been seen in the garage. Dinner table conversation regularly included the nuances of apex and camber found in specific curves on the county roads surrounding our somewhat rural enclave. The motorcycles had number plates on them, and the family airplane wears inverted fuel and oil systems. Good people from the village don’t come around here much, except to complain about the noise.

Still, even if he was raised in a performance greenhouse, the boy has a point. There is a tremendous amount of “be careful out there” columns in the av-rags. And if those grow stale, there are always fascinating accident reports to read (I’ve learned not to go into too much detail when mentioning these to my wife, especially the ones dealing with fire). Almost every av-pub has a “you won’t catch me doing that again” homily (we all love those), and of all the enthusiast publications I’ve subscribed to over the years, only aviation rags have columns by the resident attorney. Do these airplane guys know how to have a good time or what?

Of course we do, but we don’t show it much. And launching oneself a mile or two up in the air is an inherently dangerous activity, no matter what the poster of the Jenny in the tree says. It’s prudent to long living—so you can get more flying in—to be safe about aviating. And, as we grow up, we see learning the physics, mechanics, legalities, and traditions of aviation are all part of the satisfaction of flying.

But sometimes I wonder if we haven’t Sanforized most of the fun out of aviating. For sure the local airport is no longer open even to casual inspection, much less a source of wonderment to impressionable youth. Admittedly, I wouldn’t say the local fly patch has ever been a particularly inviting place, as they are civic works and not entertainment centers. There never were fluttering flags and blinking lights, but at least they were accessible to a kid on a bicycle who wanted to take a closer look at the planes. After that, it was up to the people at the airport to welcome anyone new—or just let the dog keep barking.

Today, the airport is that gate down the road with the signs warning about various federal laws. Should a newbie somehow gain access to the airport, wander around the planes, and somehow get a ride (let’s hear it for Young Eagles), there is the cost, and what for today’s generation is a long, grinding dedication to flight before gaining a license to commit it. You really do need a half-crazed longing to fly these days.

So I sometimes wonder what effect the safety emphasis in aviation literature—and in aviation’s formal culture as outlined by the feds and local authorities—has on those looking for a hobby in the sky. For all the good reviewing the regs and reminding everyone to be careful out there does, shouldn’t there also be some incentive to the fun side of aviating?

Ultimately, I offer no solution. It’s not prudent to extol the thrill of hedge hopping the Midwest vastness, or say just how eagle-like it is to swoop down a ravine, no matter how remote and legal the terrain may be. And closer to town, the fences around the airports are not coming down, and they aren’t building new airports like so many housing tracts. Big Brother is looking harder all the time through his security cameras and ADS-B. New electronics are impressive and add safety, but add significant cost and, let’s face it, take a lot of the romance out of picking Dogpatch Field out of the haze, out there on the edge of town, where the river and railroad tracks run together.

Self-servingly, perhaps a small solution is to have fun ourselves and tell others about it. This might explain one reason why backcountry flying is so popular. Boring holes between Plunkville Municipal and Burgeoning Falls Field in search of a better arugula salad offers only so much satisfaction.

I get the fitting into the system thing, being a stalwart cog on a big social wheel allowing the free traffic of goods and services. But in the end, talking to the tower is coloring between the lines. Bolting on the big tires, taking out the electrical system, tossing a sleeping bag in the back, and heading for the hills is a totally different experience (and our kit aircraft are the absolute ground zero of that movement). Sure, the magenta line on the GPS means there’s no angst navigating, but the reduction in oversight among the rocks and trees, plus the distance between you and a trauma center, does give a sense of adventure—not to mention the realities of density altitude and abundant aggies strewn over the landing strip. The stars at night are nice, too.

Better yet, take someone along with you. Even if it’s just for the glazed walnuts and cranberries among the arugula, introducing as many people to flying—fun flying—as possible could pay handsome dividends to aviation. And you’ll see it through new eyes.