Difficult to imagine as it is, I was recently out at the flugplatz for no real reason, likely picking up a tool I thought I needed at home. Having slid inside the hangar to check on the children and rummage in the toolbox, I retrieved the prized gasket scraper or whatever it was and headed off the property.

Rounding the hangar row opposite mine, I noted a hangar door open and, as if drawn by an ACME super-conducting magnet, wheeled the car off its original heading and down the taxiway to the open hangar door. Single-seat aircraft may be the epitome of in-the-air socialization and all that, but on the ground I’m all gab.

Inside the hangar was an acquaintance with a new Pietenpol Air Camper. All spokes and struts, the parasol held definite pride of place in the tee, surrounded by the usual flying effluvium and some household ejecta in the form of a sofa and chairs. We made speak of the latest banalities before one of us mentioned equipping for ADS-B. 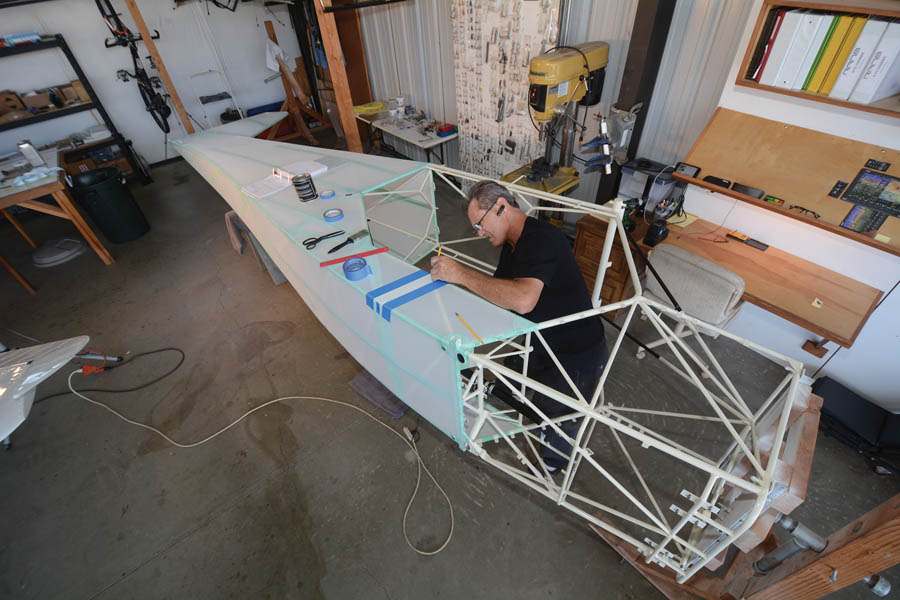 If you’re building something light and handy, are you willing to omit an electrical system to avoid ADS-B? It’s a choice some have already made.

Now, unlike our brethren Elsewhere, we who fly in the lower left corner of the nation do so in a noodle soup of airspace. There’s B, C, and D in abundance, A all over us, naturally, and we’ve got more veils than a mass wedding. We were resigned to Mode C back at the first hint of the transponder transformation, and ADS-B is simply a given for anyone wanting to fly more than a year from now. But my friend had a new way of skinning the latest electronic cat.

“I just took the alternator off the Pietenpol,” he said. “It hasn’t been signed off yet, so I can still do that. You can’t remove the electrical system from an already licensed airplane,” he noted, “but this one still hasn’t received its ticket, so I’m just going with a total loss battery system.” We both agreed the fair-weather, short-legged Air Camper was a fine candidate for staying low, slow, and far enough away from the speedier and more populated portions of the SoCal rat race so that ADS-B on it wasn’t of much use to anyone.

Ironically, this should make this youngster of a Pietenpol one of the newest airplanes around, yet one of the most primitive.

And seeing how the ugly subject had come up, we dutifully reviewed how few people had complied with the ADS-B mandate to date, and how the nav or taillight gizmos seemed like crafty solutions—unless, of course, like the Pietenpol, you have no nav lights.

So then the question came up as to why so few people have opted in to ADS-B with the mandate just a year away. Well, there’s no rocket science figuring that out, at least on the surface. Flipping out a couple of thousand dollars for anything mandated is sure to build a serious case of procrastination. Like “affordable” $100,000 LSAs and brand-new 172s at a half million dollars, I’m at a complete loss as to who thinks whipping out several grand for a black box that doesn’t really make my airplane fly any better is something I’m going to run out and do. Of course, that’s hardly a worry as we all own airplanes, so we’re rich, and that’s that.

Which reminds me of another recent talk with another fellow aviator. He was lamenting just that idea: If you own an airplane you’re automatically considered rich. He reminded me of the days, just a few decades past, when the airplane = rich mindset didn’t exist. Some folks had two cars, some had a pleasure boat, others a horse or maybe a travel trailer or a motorcycle or, in a few cases, an airplane. And if so, they were just a guy who had an airplane, and when they showed up in a 12-year-old pickup truck wearing jeans and a plaid shirt, they weren’t thought of as rich guys who liked to dress down; they just were a regular Joe who liked flying. And if the pickup was a bit worn, then maybe they needed to save some of their truck money for airplane money.

Naturally, the other reason so few people have bought into ADS-B is because they figured less expensive solutions were on the horizon. If they’d only wait they’d get a deal, so they’ve been waiting.

Maybe some people don’t really fly that much, or are planning on giving up flying where ADS-B is required. But none of that makes sense in our thick airspace. Flying only where ADS-B isn’t isn’t flying in much of the U.S.

And then there’s the only thing that truly bothers me about ADS-B, making the government my copilot. Tracking me by N-number, displaying my N-number to the world, and making my name and address easily searchable online by N-number? Really? Talk about a tool for the taxman…or any other arm of the government that somehow wants to search my travels, or even any disgruntled who figures I’m rich. No thanks.

Actually, what bothers me most is not that the government wants to track us—it’s the nature of those in power to want ever more control, so while disappointing it’s not unexpected. It’s that none of us seems to mind. At least not enough to say anything about being tracked by N-number and, by extension, by our name and address.

Imagine if cars displayed the license number of every car around them on their dashboards and that the DMV records were open to the public online, as our aircraft registration information is. Things could get personal, should your idea of merging not quite mesh with the hothead in the lane next door. Displaying the “wrong” sports team logo or political bumper sticker could take on some nasty consequences, too. There’s all kinds of nonsense that could come of such a scenario, so why are we expected to effectively do the same when flying?

Okay, so your typical fellow pilot isn’t going to toilet paper your house because you cut him off in the pattern. But what about a government heck bent on giving us—and themselves—all the security technology can buy? What about setting up a pay-for-services funding scheme? What about having the unblinking computers tickling the local GADO the next time you accidentally drag a wing tip through the corner of some Class B airspace?

None of these are new concerns; the military is going to opt out of ADS-B identification as it suits them, the biz jet boys over at NBAA have put on some pressure as being tracked is a business liability, and there’s even an anonymity mode on some ADS-B systems, but only after 10 minutes of flight (that’s hardly anonymous). But the real solution is to simply not broadcast the IACO number that links an ADS-B transceiver to an N-number. It’s only there for watchdogging and the taxman.