Home Magazine Builder Spotlight So You Want to Buy a Used Homebuilt? 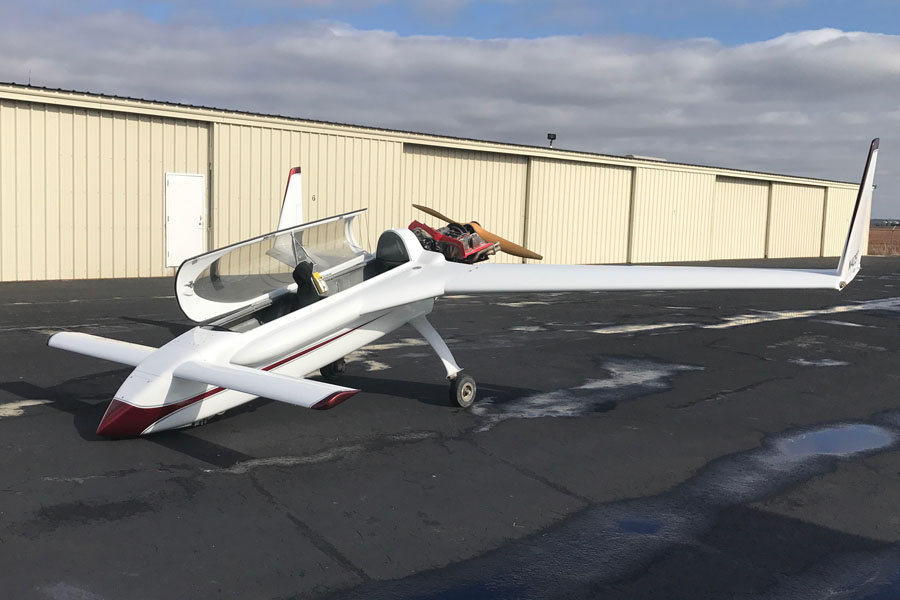 We’ll use the Long-EZ as our example in this article. Canard airplanes are what we deal with at Jet Guys, and we see the following scenario regularly. It can also happen with other types of experimental aircraft, so here you go.

The perfect Long-EZ you found has an IO-360…kinda high time, but it’s not using oil, has really good compressions, dual electronic ignition, and fuel injection. It’s IFR with an IFR GPS WASS nav/com unit, second com, EFIS, autopilot, standby attitude indicator, engine monitor that does everything, really good paint and interior, has less than 150 hours total time, and was built and maintained by an A&P. Not to mention it goes like stink—192 knots true, burning nine gallons per hour. It needs nothing and comes with a spare prop. 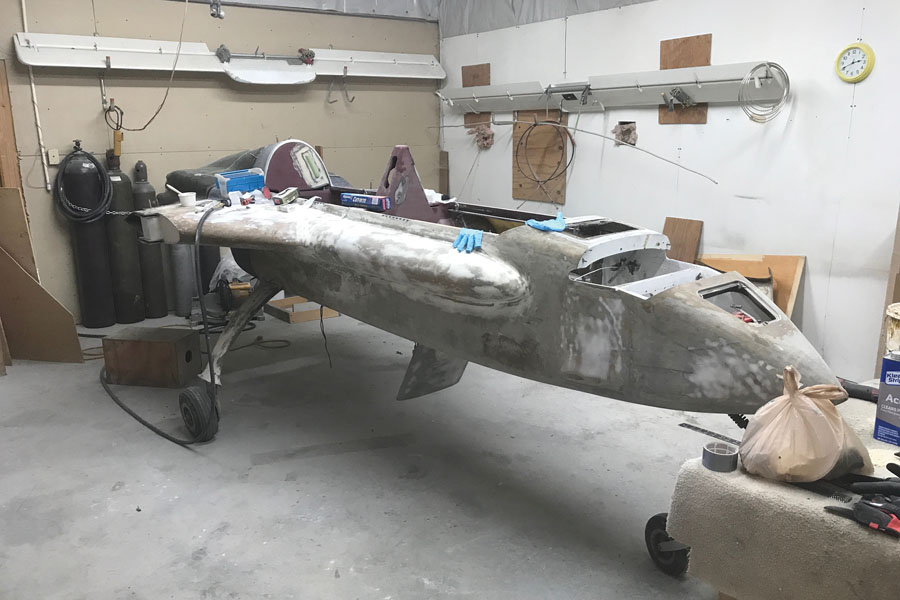 The owner of this VariEze “just wanted to overhaul the engine.”

So, you give us a call, and our conversation goes something like this:

“I found this Long-EZ (the one just described), but I’ve seen some others listed for less than $35,000, and I’m thinking of buying one of them instead.”

“Really. Tell me about your second choice.”

“Well, it’s in California, has 800 hours on it, and hasn’t flown in seven years. The engine, an O-235, was overhauled when the airplane was built 15 years ago. It has electronics that were available back in 1984: 360-channel radios, no transponder, and Stewart Warner gauges. The widow only wants $30,000 for it, and it has new paint. The owner succumbed to cancer four years ago.”

“So, can you guys get it back up to speed and flying? Can’t be hard; it’s a flying airplane. And after you get it in your shop, would you put an EFIS in it and a new radio and transponder?” 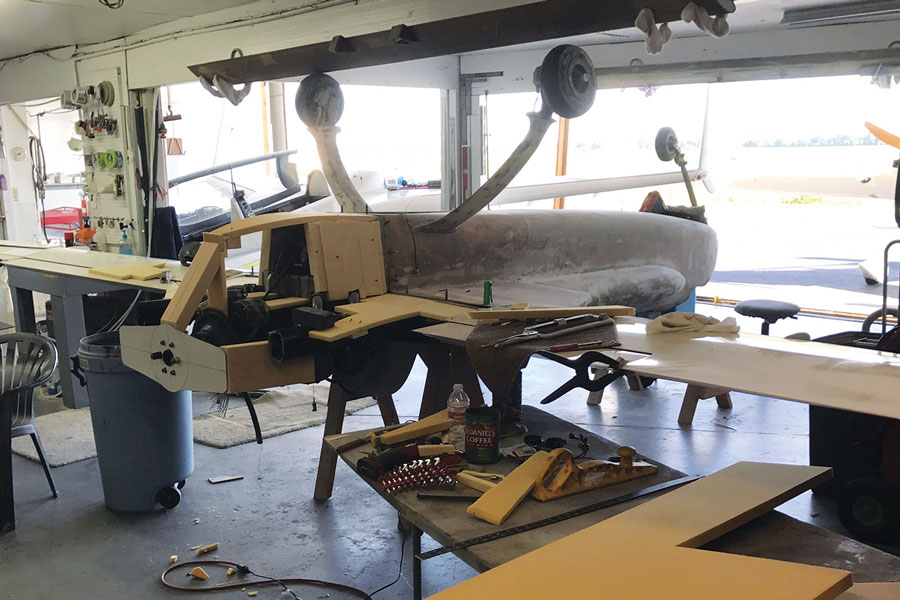 The original cowling on the “just overhaul the engine” VariEze was ridiculously heavy. To build the bottom cowling, we flipped the airplane upside down.

“Sounds easy, huh? Let’s break this down…we have to drive from Tennessee to California and back with a trailer both ways; there’s a week’s time. So you’re looking at two grand to recover the airplane. Yeah, it’s a recovery. It will be covered in dirt, hopefully dissembled, with flat tires, and have to be dug out of the back of a garage.”

Fast forward a week or so, and it’s time for another phone call:

“Your project…yep, it’s a project…is now in our shop in Tennessee. First thing you said you want is new radios—a nav/com and a transponder. You don’t want a GPS nav since you’re going to use your iPad.”

“OK, you also want one of those snarky small EFIS units. And you want us to move that row of switches…oh, and put in a replacement instrument panel—you know, one of those carbon-covered aluminum panels we do.” 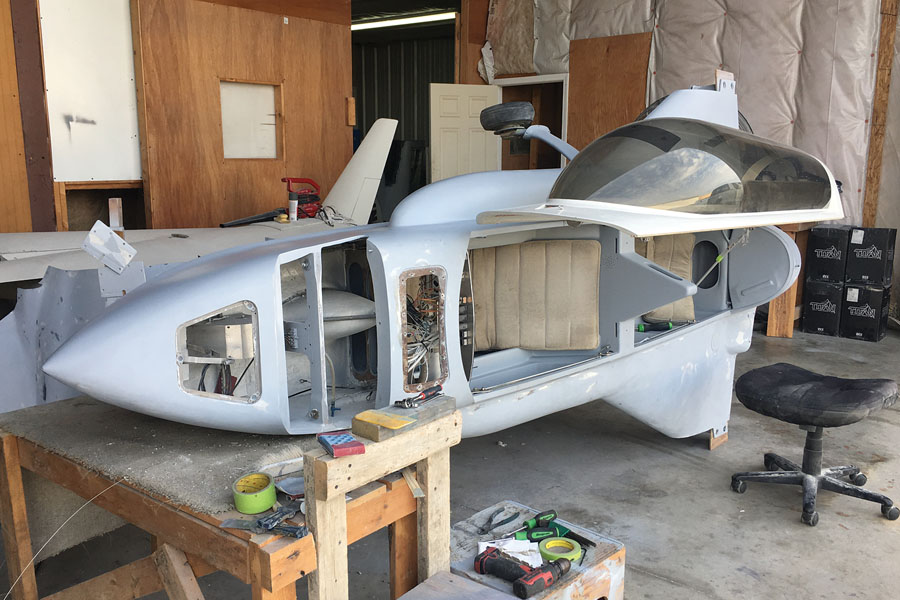 Sometimes to work on the inside, it’s easier to put the fuselage on its side.

“Yeah…and you do know where to get instrument panel placards made up to the correct size, right? And can you install an autopilot, too?”

“Sure, right after we pull the current boat anchors out of the panel—yep, they’re trash—and by the way, we found the wiring is code-compliant house wire throughout the airplane, complete with a copper tube down the side of the fuselage for a ground strip.

“So let me guess…you want us to use the existing wiring and plug in eight grand of new radios?”

“Ain’t gonna do it. And to be honest, it’s faster, cheaper, lighter, and safer to rewire the whole airplane. By the time we figure out how it’s wired, it’s easier to start over. So just to wire the new radios together is close to 10 days of radio-guy work…and he’s paid by the minute…like a buck a minute. But he is really good.” 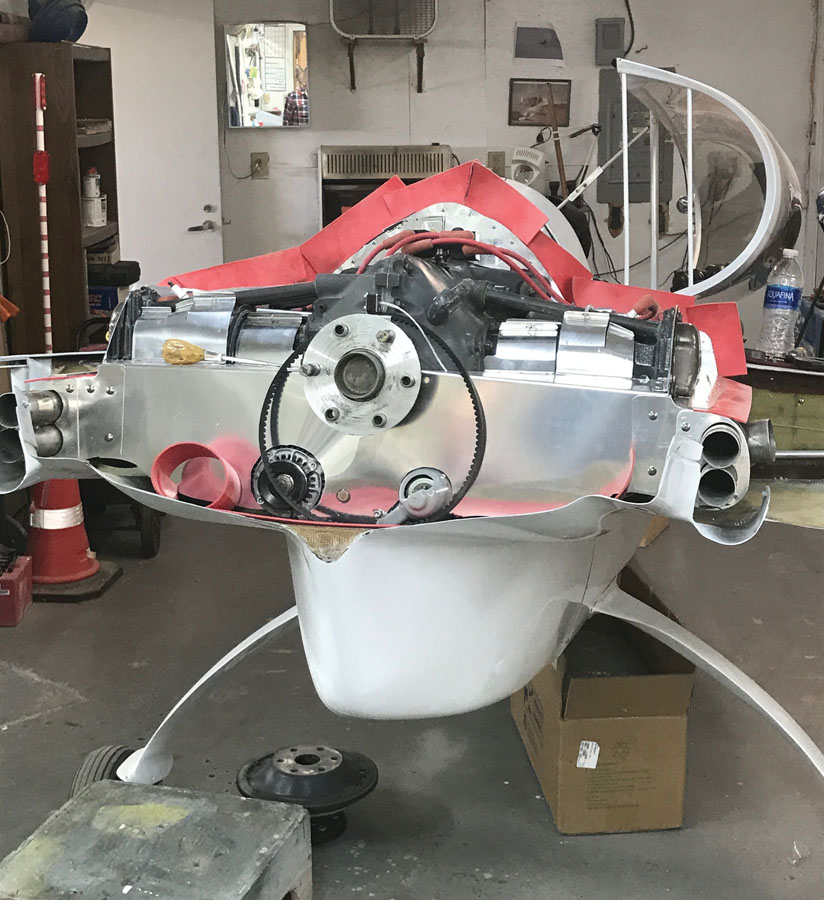 What’s an engine overhaul without new baffling? A really good job on baffles is a 10-day process.

Now, I know what you’re thinking—it doesn’t really happen like this. Well, sorta…usually it’s even worse. The next call often goes like this:

“By the way, you’re going to need new tires and tubes. And we need to bleed the brake system after the brakes are rebuilt.”

“Of course. What, you expect O-rings to last forever?”

“And remember those 1984 Stewart Warner gauges you have? Well, half don’t work…which is cool because you want an EIS engine monitor system installed…but it’s going to require new sensors and wiring, too.” 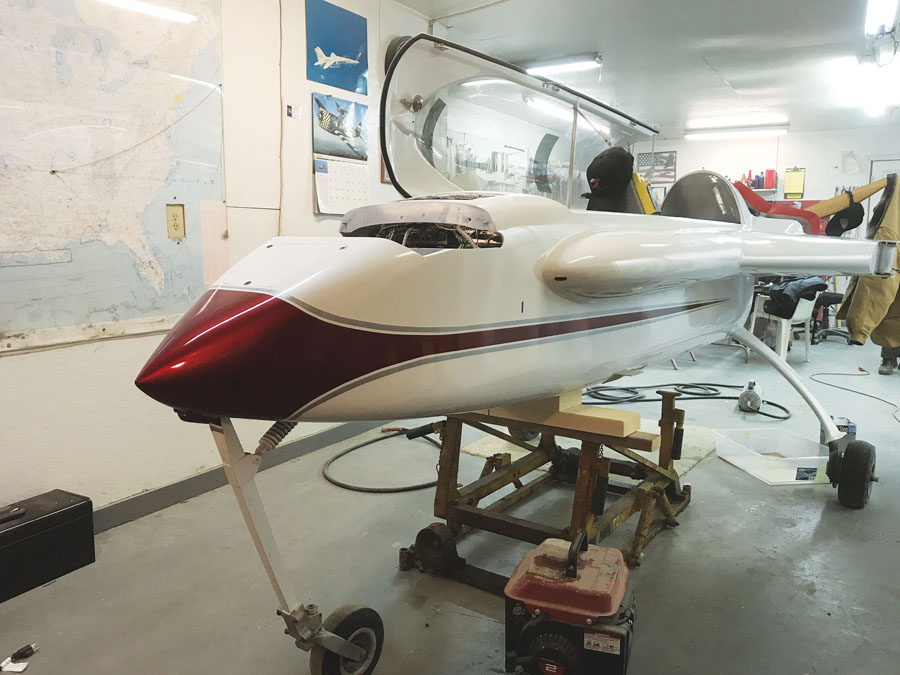 The red and silver are House of Kolor paints that require a clear coat.

A few weeks later, we finally get to run the engine. Now I have to ask a couple of very serious questions:

“The carburetor hasn’t seen fuel in seven years—what are the odds it will work? What are the odds that anybody would want to fly in front of it? Probably about 0%. But we’ll try anyway. Who knows…”

“Uh-oh. Please let me know how it goes.”

So, we pull the plane out of the hangar, dump in 10 gallons of fresh fuel, and poof—the fuel selector in the front seat leaks…just a minor O-ring, so we start it. Yeah, we already replaced the dead battery.

Bang, cough, and a couple of backfires later, it kinda runs. Oh man, it’s sick. Forget a mag check—can’t get that high in rpm. Pull the mixture to shut it down and nothing happens. Turn the mags off…yeah, it dies. 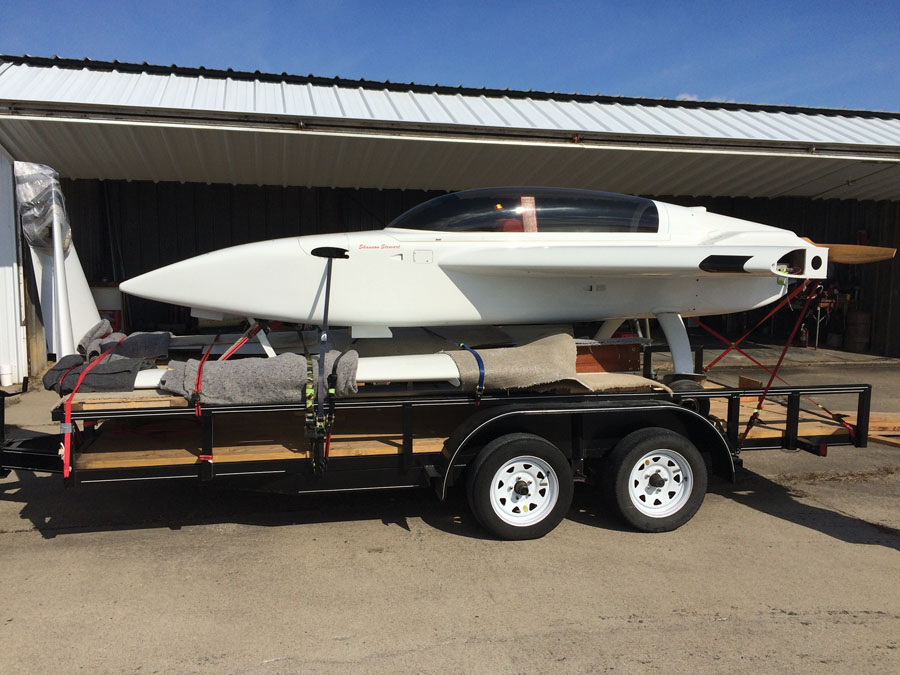 A Long-EZ that hasn’t flown in four years gets transported to the Jet Guys shop.

The compression check shows one cylinder at 65 and the other three between 42 and 55. I’m not making this up, y’all. It actually happened.

We borescope the cylinders and yep, all kinds of pitting and corrosion. No surprise there. Time for an engine overhaul—and another phone call:

“While the crank was out being checked, it was found to have a crack. Cylinder and pistons are shot, too. Let’s say it goes well…for an O-235, you might get out for about five grand.”

“Oh, the carburetor…Send it out and get it overhauled, too—800 bucks and about two months to accomplish.”

A few weeks later, an O-320 shows up that is half run out, but reliable. Cool! 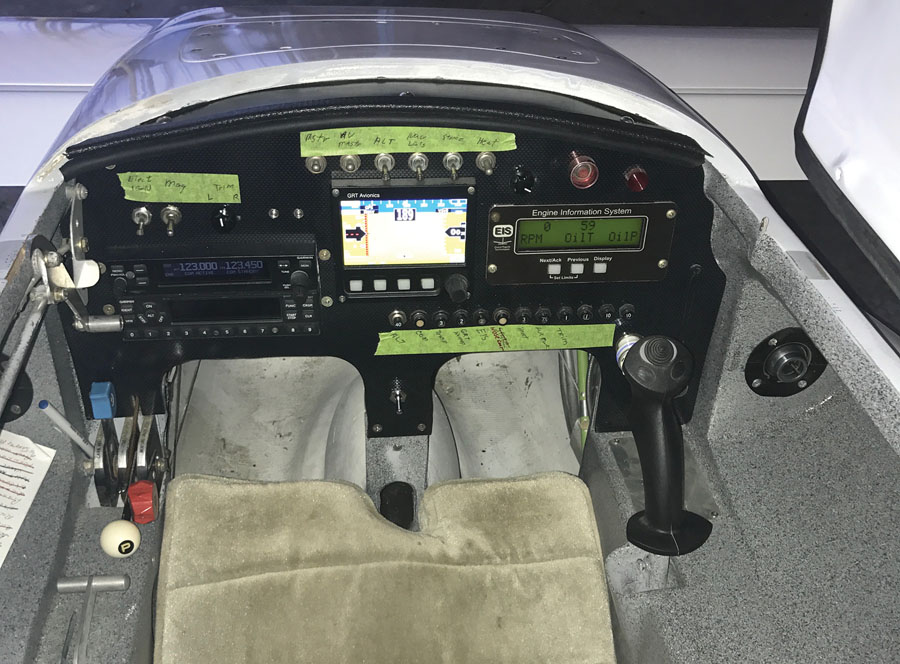 Even though snarky green tape with Sharpie ink is legal, you want appropriate placards on the panel.

But wait—the prop is bent the wrong way. It’s for a tractor type…880 bucks for a Sterba wood prop and two more months. But there’s a whole lot more to discuss:

“So we’ll build a new engine mount, dump the fuel—only 10 gallons—and take the wings and canard back off. Then we’ll flip the fuselage over and make the lower cowl. Then it’s back upright to make the upper cowl. Next, we sand and fill, then paint…You do have the exact paint numbers for a match with your fresh paint job, right?”

“Well, um…Hey, since you have to make a new engine mount and all, can you put dual electronic ignition in it?” 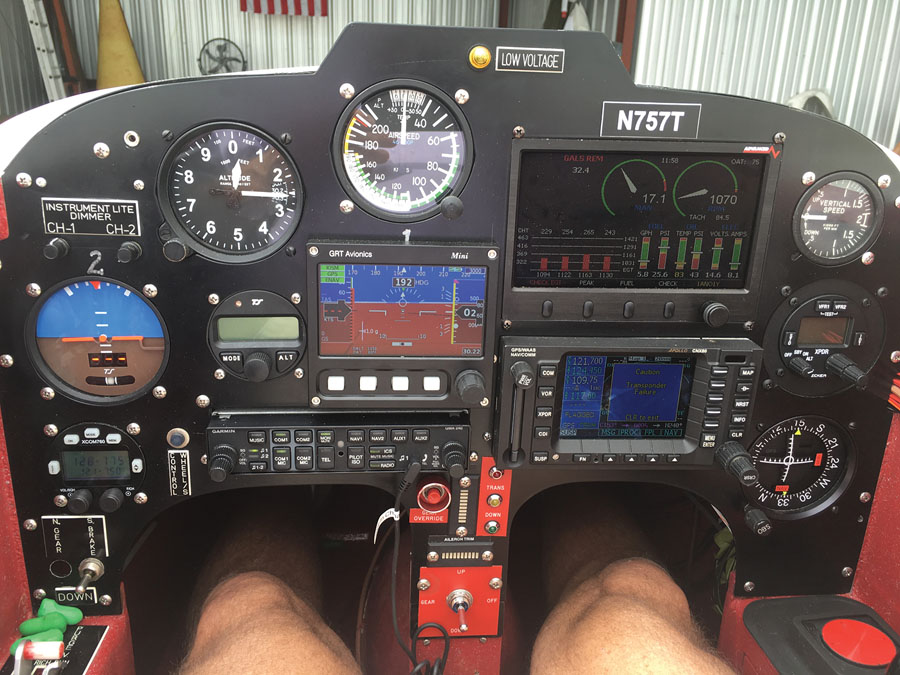 New mini EFIS and audio panel installed in a Long-EZ.

Finally, the plane is put back together and ready to tweak. The EFIS has to be calibrated, engine sensors brought up, plus a couple dozen other tasks that must be completed before it’s ready for flight. Guess what, it’s out of rig…common.

After two days of test flying at 500 bucks a day for the test pilot, you now have a 155-knot cruiser. No gear leg fairings or wheel pants, which takes off about 13 knots. Oh, you want those, too… 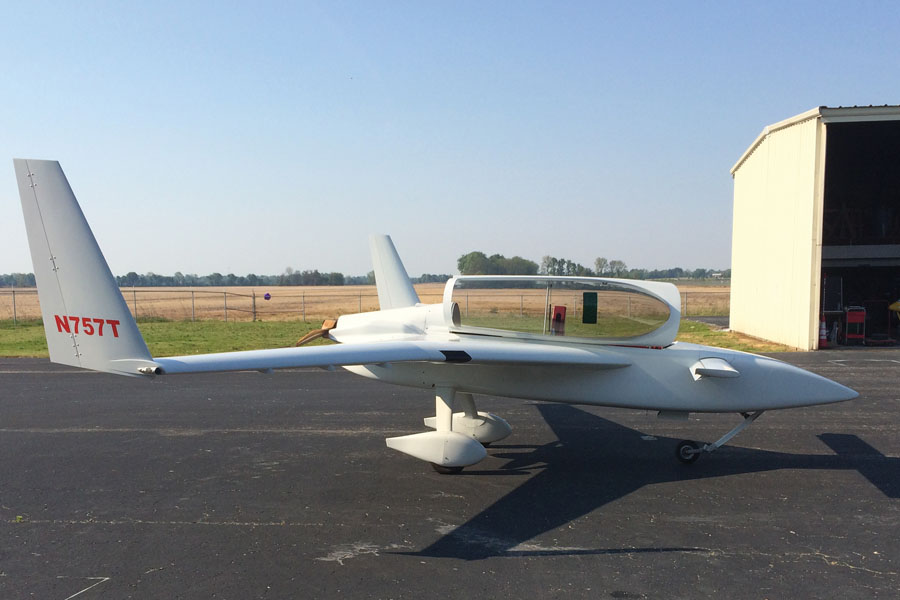 When all is said and done, perhaps it would have been cheaper to buy a more expensive plane that’s already flying with the equipment you want.

The reality is, you have a choice: fly now or fly later and pay more money. The $52,000 bird may have seemed expensive, but was it really? Please understand, doing all the upgrades is one of the things we do. We’ll do whatever you want because we want our customers happy. But which way really makes you happy?

This scenario plays out regularly at the shop. None of it is made up. It applies to Velocitys, Cozys, Longs, VariEzes, and probably any airplane that has been sitting unused for years. The way we proceed is really up to you.

As this issue was going to press, we were saddened to learn that Lance Hooley died in a crash in his one-of-a-kind Jet Eze near the Covington (Tennessee) Municipal Airport. We extend our deepest condolences to Lance’s family and his many friends in the canard segment of experimental aviation.
—Ed.