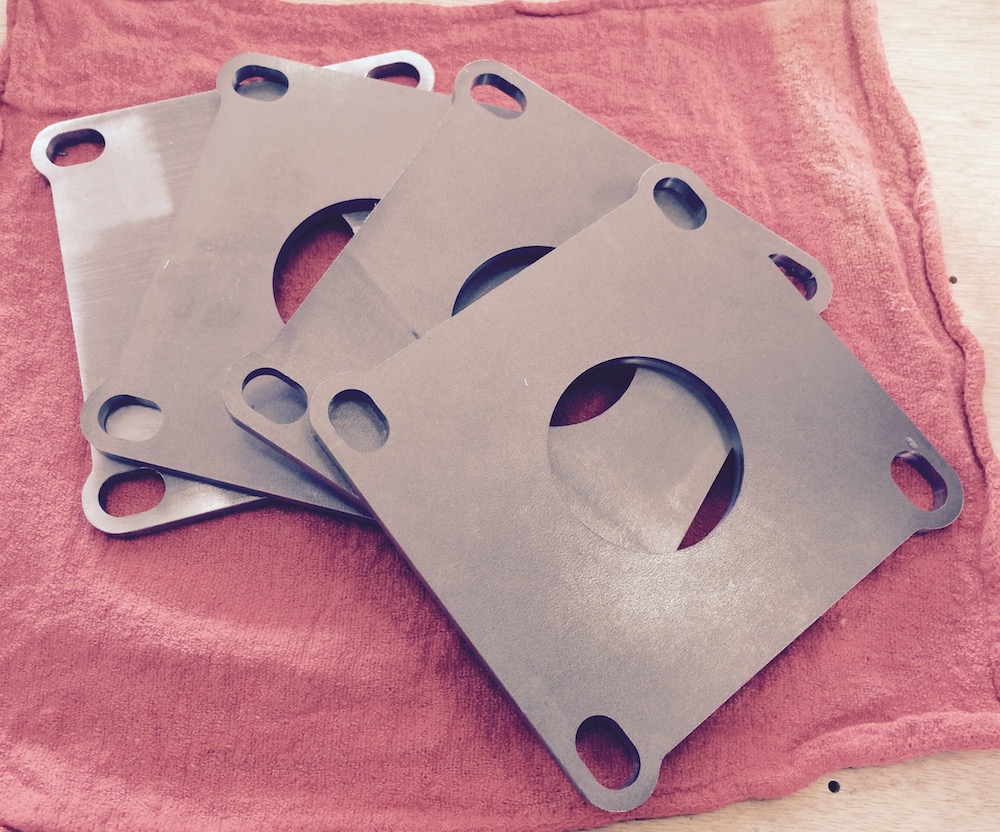 One thing about homebuilders – we love to make things! Just about any project will do, as long as there is stuff to figure out and material to cut and shape. We use all sorts of tools to make things – including other tools. In fact, when you really get into fabrication, you might well spend more time making the tools to make a part than you do making the part!

I spent a wonderful couple of hours in a friend of mine, Dayton Murdock (of DJM Manufacturing) yesterday, producing these torque plates (used to properly torque the case through bolts on a Lycoming type engine) on his CNC milling machine. Dayton is an experienced machinist, and has taught this kind of work (in between producing throttle quadrants and tail wheels for the experimental market), and it was both fun and educational watching him turn an idea for a part into a drawing and then a program for his Haas mill.

Once the program was ready, we cut the quarter-inch thick steel into 6″x6″ blanks, and loaded them one by one into the machine to watch it produce these neat little plates, ready for the next engine assembly or cylinder replacement, It was amazing to watch the mill turn out perfect copies in turn, as many as we had material for. Yes, CNC is a bit like magic – but it is mostly useful when producing numerous copies of a piece.

The machinist has to put a lot of thought into the process to be used to make the part, and then translate that into code for the machine to use to do the work.  In essence, the machinist has to come up with all of the moves and techniques they would use if they were making the part by hand – and then tell the machine how to do that. I suspect that an experienced machinist could probably make one of just about anything quicker than programming – but if multiple copies are needed, this is the way to go. And – each part will be identical.

Any day in the shop is a good day, and when you learn something new – it is even better. Watch for the complete story in a future issue of Kitplanes!

Paul Dye - April 18, 2020
1
This was going to get ugly. Crossing southern Louisiana in the middle of the afternoon...