A large part of designing airplanes to be safe focuses on preventing accidents: We go to great lengths to provide airplanes with good flying qualities, gentle stall characteristics, and we try to make sure the critical systems aboard are reliable. Unfortunately, in spite of everyone’s best efforts, airplanes sometimes meet the ground under less than ideal circumstances. There is much a designer can do to help keep the unwilling participants in an airplane accident alive and ensure they come through the experience in good enough condition to be upset about the incident afterward. With careful design, many of the factors that lead to injuries and fatalities can be mitigated or eliminated.

What Does the Damage?

Most of the injuries received by the occupants in an accident are caused by deceleration and crushing. With deceleration, the human body can only tolerate so many G before internal organs are damaged. The critical G load is dependent on the way the body is supported, the G onset rate, and the duration of the high load. The inertial forces on the airplane structure and components during the crash deceleration are what cause structural breakup of the airplane. With crushing, obviously, occupants of an airplane may be injured if the cabin structure collapses under crash loads, or if a large object intrudes into the cabin. Crushing may occur longitudinally due to impact loads or vertically in the case of a rollover.

The most effective way to reduce injury to the occupants of an airplane in a crash is to reduce the loads generated by the impact. Two factors determine the level of deceleration, and hence impact loading: speed at the time of initial impact, and stopping distance. To minimize load, we want to hit as slowly as possible and take as long a distance as we can to stop.

This squared relationship illustrates why keeping the wing loading and stall speed of an airplane down is one of the more effective ways of improving survivability. The faster you hit, the more distance you need to stop safely, and the higher the loads in any impact. Crash survivability data for light airplanes shows that for a properly restrained crew, almost any impact below 45 knots is survivable. By the time impact speed is up to 75 knots, almost any impact other than a smooth, horizontal touchdown is likely to be fatal. While 75 knots sounds slow when we think in airplane terms, consider that it would be like running your car off the road at 90 miles per hour.

The second major factor affecting crash loads is the angle between the flight path and the ground at impact: The steeper the ground impact, the more abrupt the stop. At impact angles above 30, survivability decays rapidly. The deadly effect of steep impacts is the reason stall/spin accidents are so dangerous. Even though the speed is relatively low, the airplane hits the ground nearly vertically. The stop is abrupt, and there is no slide to decrease impact forces. This illustrates the importance of maintaining control of the airplane. As long the pilot can keep the impact angle below 10, the odds of survival are greatly increased. Once control is lost, the situation can deteriorate rapidly. 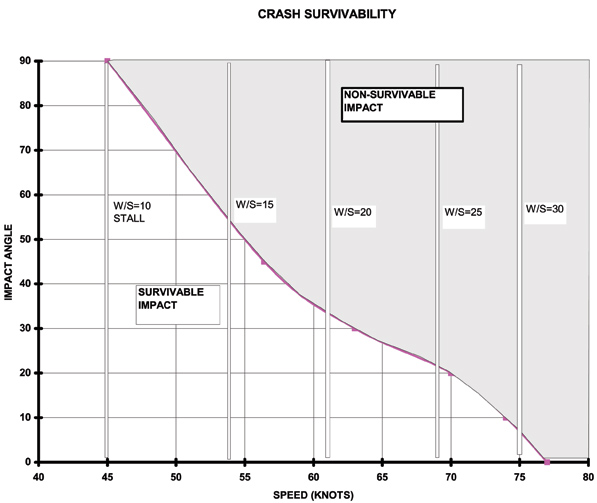 Angle at impact and speed are two important factors that affect crash survivability.

If the airplane hits soil rather than pavement, the nose can dig into the dirt. This will bring the airplane to an abrupt halt and impose large, injurious G loads on the occupants. If the nose of the airplane is designed so that it tends to slide over the surface without digging in, the stopping distance will be increased and the probability of survival will go up accordingly.

On single-engine airplanes, the lower edge of the firewall is typically the culprit in digging-in scenarios. The cowling is usually not strong enough to act as a runner on the surface of the ground. If the cowling tears away, the hard corner between the firewall and the bottom of the fuselage acts like a bulldozer blade and digs in, causing large deceleration. A radius at this junction, or the addition of a runner-like structure ahead of the firewall inside the cowling will greatly reduce the chances of severe digging in, and increase survival rates in flat-impact accidents.

Once all the loud noises stop, it is essential that the people inside the airplane be left with a "living space" bigger than they are. Even if the cabin deforms under crash loads, it should not collapse inward and crush its occupants. There are two primary forms of cabin crushing to consider: fore-and-aft "telescoping" and when an airplane flips over.

In an accordion-style compression caused by decelerative forces in a frontal impact, the strength of the cabin walls and floor will determine how much the cabin will shrink fore and aft.

The impact forces exerted on the cabin are equally important. Here the designer can attack from both ends. Heavy objects behind the cabin should be eliminated whenever possible. If it is necessary to place heavy objects behind the crew compartment, as is the case in a single-engine pusher airplane, the cabin walls should be strongly reinforced to withstand extra longitudinal load. If the front of the airplane hits something and stops, an object in the back is held back by forces exerted on it from the airplane structure. If the structure is not strong enough, the object moves forward, crushing the intervening structure and space. Another approach is to design the structure to fail asymmetrically, so it directs the heavy object downward and under the crew space.

At the front end of the cabin there are several things a designer can do to reduce crash impact forces on the crew space. The most important is to provide some effective crush space forward of the rudder pedals. In a frontal impact, the structure in this crush space can crumple and absorb energy without invading the crew space. The length of the crush space adds to the overall stopping distance of the crew and seats, and reduces the overall force on the rest of the airplane.

Crush space is only useful for safety if there is energy-absorbing structure within it to crumple. This is a problem on typical tractor-engine singles, as the cowling is too light to absorb much energy. Most of the crushing in an impact happens from the firewall aft. This is bad, because the people also are located just aft of the firewall. Some recent tests have shown that a properly designed bed-type engine mount can absorb a significant amount of energy in an impact without compromising the cabin space.

Even a relatively small amount of crush space can make a big difference. For a 60-mph initial impact, if the nose digs in and stops within 1 foot, a rigid airplane would experience a deceleration of approximately 120 G. This would be injurious and probably fatal to anyone aboard. If there were 1 foot of crush space ahead of the cabin, thus increasing the total stopping distance to 2 feet, the G loading in the cockpit would be reduced to about 57 G. This would likely cause injury, but would not be fatal for a properly restrained person. The addition of another foot of crush space would bring the deceleration down to a point where there is a reasonable chance of avoiding serious injury.

The second type of crushing impact occurs if the airplane flips over during the course of the accident. If the top of the cabin is not strong enough to withstand the weight of the airplane and the flip-over impact loads, there is a great likelihood of a severe or fatal injury. An unprotected pilot in an open-cockpit airplane is in even greater jeopardy.

A significant number of homebuilt designs provide insufficient protection for the crew in flip-over situations. There are some open-cockpit airplanes that lack even a headrest behind the pilot. A number of low-wing bubble-canopy airplanes also have little or no strong structure above the pilot’s head for protection. It is possible that the designers of these airplanes are depending on the vertical fin to offer some measure of safety. However, this is a poor idea, because the vertical fin usually fails structurally if the airplane flips onto it and provides little protection for the crew. 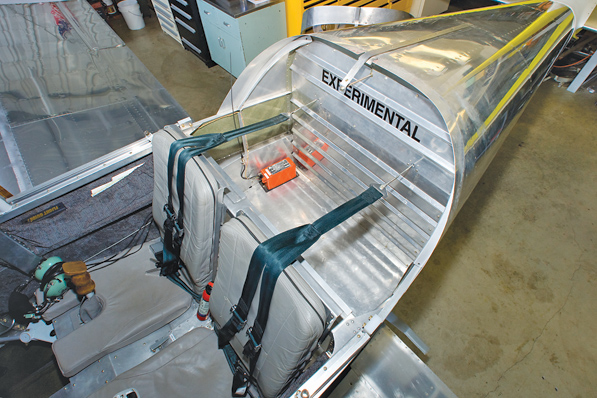 Cabin structure should be designed to leave adequate crush space in the event of an accident, and any large items should be well-secured.

I believe there are two reasons designers tend to neglect rollover protection in the design of homebuilts. The first is convenience: Rollover structures are heavy, tend to be exactly where you want to put other things, can restrict visibility and are generally a pain to design. The second reason, or rationalization, is a mistaken belief that the odds of flipping a plane completely over (particularly if it has tricycle landing gear) are so remote that it is not worth worrying about. This is dangerous thinking and leads to unnecessarily dangerous airplanes.

I know two pilots who were saved by good rollover structures. The first built a common low-wing bubble-canopy airplane that had only a lightweight turtle-back structure to fair in the canopy. He chose to add a strongly reinforced bulkhead behind the seats as a rollover protection structure. Several people tried to talk him out of it on the grounds that it added weight and was unnecessary, as the airplane was so stable on the ground that the odds that he would ever flip over were infinitesimal. His response was always the same: "You are probably right, but I feel more comfortable with it there." That decision saved his life.

About 18 months after his first flight, my friend was landing at an uncontrolled field. Just as he crossed the threshold, another pilot in a high-wing airplane taxied onto the runway to take off. A collision resulted, with the descending homebuilt landing on top of the airplane that had taxied under it. My friend’s airplane was tumbled by the collision and slid down the runway inverted, spinning and shedding parts in all directions. The fuselage came to rest supported by the "unnecessary" rollover bulkhead. The pilot and his passenger were bruised a bit, but were otherwise uninjured.

In a similarly scary incident, a homebuilder who hangared two doors down from the Facetmobile at Chino Airport in Southern California had an engine failure shortly after takeoff in a high-wing homebuilt fitted with a steel-tube fuselage. While attempting to make the forced landing, he hit a telephone wire, which caught the landing gear and deposited the airplane inverted on the ground. Just about every tube in the cabin area was bent, but they didn’t collapse, and the pilot survived uninjured.

The keys to crash survivability are relatively straightforward. Keep both the impact angle and impact speed down. Provide crush space to absorb energy, and make sure the cabin stays intact enough to provide a livable survival space for the occupants of the airplane.