In our discussion of aeroelasticity in the last issue, we have seen airplanes are not perfectly rigid and their structure does distort in flight due to aerodynamic and inertial forces. Structures do not just deflect. They can also vibrate or oscillate. Most of these vibrations are damped, and relatively benign. In certain cases, however, aerodynamic and inertial forces couple to produce powerful and destructive oscillations called flutter. 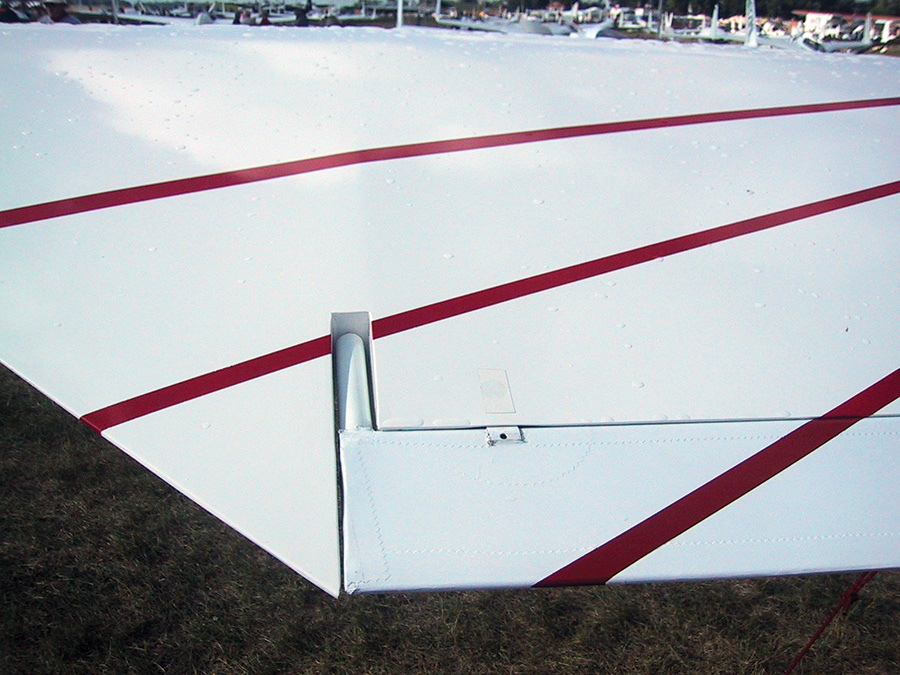 This aileron uses a weight on the end of an arm that protrudes well ahead of the hinge line to achieve a nose-heavy aileron.

Flutter is an oscillation that is driven by the interaction between aerodynamic forces and the elastic characteristics of the structure. Sometimes, flutter appears as a sustained limit cycle oscillation that does not damp out, but maintains steady amplitude. Such a flutter is often referred to as “buzz” and is very undesirable because of the cyclic loads it puts on the airframe, which can cause failures due to fatigue or working fasteners. Most certification authorities consider sustained aerodynamically-driven oscillation in the airframe structure unacceptable, even if it does not cause immediate damage.

In more severe cases, the flutter oscillation does not reach a limiting steady-state amplitude, but grows rapidly once the oscillation begins. This situation is extremely dangerous because if the building flutter is not stopped quickly, it will cause catastrophic structural failure of the airframe.

A structure has multiple degrees of freedom, or ways it can distort. Each type of distortion gives rise to a mode of vibration. For example, on a cantilever wing, the first two structural modes are wing bending, where the wing bends up or down like a diving board, and wing torsion, where the wingtip twists relative to the root. Each structural mode has a natural frequency at which it vibrates when it is excited by a force. The natural frequency is determined by the stiffness of the structure and its mass and inertia. In some modes, where the aerodynamic force that arises from deflection acts like a centering spring (aileron deflection for example), the frequency is also a function of airspeed. 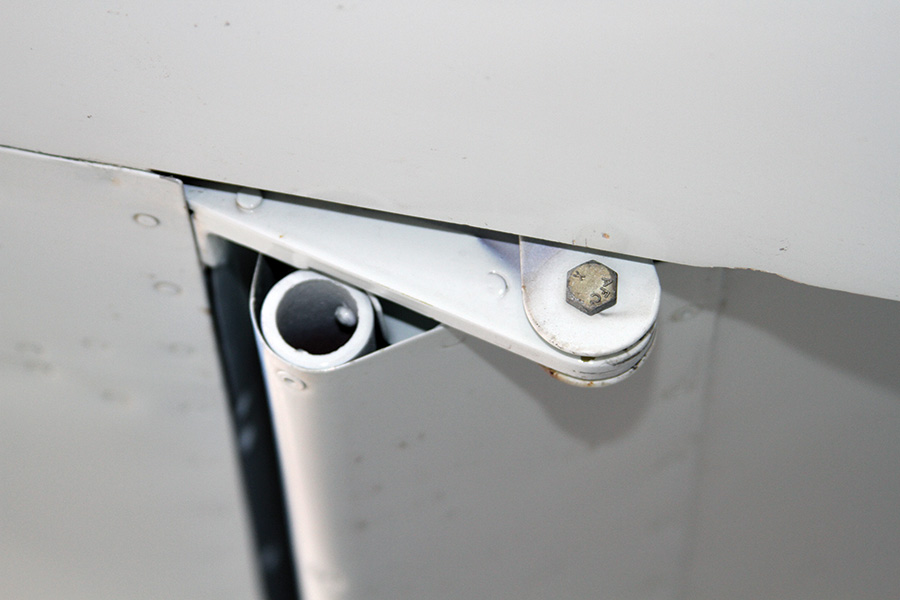 This aileron design uses a length of iron water pipe in the nose to provide balance about the hinge point.

The second condition for flutter is that deflection in one mode causes forces that drive a deflection in the second mode. For example, wing twist changes the lift of the outer portion of the wing, which in turn changes the bending moment on the wing. Accordingly, a change in wing twist (one mode) causes a change in wing bending (other mode). If the natural frequencies of the first wing bending mode and the first wing torsional mode are the same, there is a potential for flutter.

One of the more troublesome types of flutter encountered in general aviation airplanes is aileron flutter. Aileron flutter first appeared when designers learned how to make early airplanes, usually monoplanes, faster then the original open box kite style machines. Many racers of the 1920s and 1930s (including the GeeBee Z and the Supermarine S4) succumbed to aileron flutter, which was a mysterious and little understood phenomenon at the time.

If an aileron is deflected and then released, aerodynamic moment will drive it back towards the trail position. Because the aileron has some inertia, it will overshoot and then be driven the other way, back towards trail. Usually, this motion is highly damped, and the aileron will stop moving quite quickly. The oscillation, even if it is damped, has a natural frequency and amplitude that change with airspeed.

The other structural mode that plays a part is the first wing bending mode. In this mode the wings bend up or down symmetrically. If the wing is excited by a gust, or a change in lift due to a maneuver, the wing will vibrate up and down like a diving board.

At an airspeed where the natural frequency of the aileron’s motion around the hinge is the same as that of the first wing bending mode, there is the potential for flutter.

The other key player in aileron flutter is the mass properties of the aileron. An upward motion of the wingtip will accelerate the aileron upwards along with the wing. If the center of gravity of the aileron is behind the hinge line, the aileron will lag and deflect down. This deflection produces more lift at the tip, which further accelerates the wing upwards. The aileron continues to lag and drive the wing upwards until the stiffness of the wing slows and stops the upwards motion. This deceleration will cause the aileron to flap upwards, producing aerodynamic down force that drives the wing back down at the same time as the wing’s natural spring action is also accelerating the tip down. Again, the aileron lags, producing force that drives the wingtip down until the wing’s stiffness slows the motion and starts the tip accelerating back up. The aileron lags downwards, and the cycle repeats. If the natural frequencies of the wing and aileron are significantly different, the aileron will return to trail quickly after the initial bump, and the system will be stable.

If the frequencies are the same, then the aileron motion will couple with the wing motion so that the aileron produces oscillating forces that are in phase with the wing bending and amplify the motion. The vibration will grow quickly until the damping in the system limits its amplitude to a steady-state buzz, or until the forces get so large that they destroy the structure. This destructive divergence can happen very quickly, with only a few seconds between the beginning of the flutter and catastrophic failure.

An Ounce of Prevention

To prevent aileron flutter from happening, we need to make sure that the coupling between the wing bending mode and the aileron oscillation mode does not happen. There are at least a couple of ways to do this.

It is important to note here that for mass balancing to be effective, the CG of the control surface must be at or ahead of the hinge line. Partial mass balancing that moves the control surface CG forward, but not all the way to the hinge line, can be ineffective, and in some cases actually cause flutter by changing the natural frequency of the aileron without eliminating the “lagging” deflection due to vertical accelerations.

Aileron balancing comes in several forms—with weights on arms and heavy leading edges being the most common.

A second approach to preventing aileron flutter is to design the control system to constrain the aileron rigidly so it cannot make uncommanded deflections relative to the wing. If successful, this approach essentially makes the aileron a rigidly-connected part of the wing. This effectively eliminates the “aileron flapping” mode that generates the acceleration-induced aileron deflections that drive the flutter.

This approach is widely used on high-performance airplanes with powered control systems. The aileron is controlled by several hydraulic or electric actuators that are strong enough to act as a rigid link between the aileron and the rest of the wing. The design of these systems is not easy since it is critical that the linkages be very tight, with no free play that allows the aileron to move independently of the actuator. Relatively small amounts of free play in the actuator, control linkage, or any of the connections in the system can allow the aileron to move enough to reintroduce aileron flapping into the flutter equation. 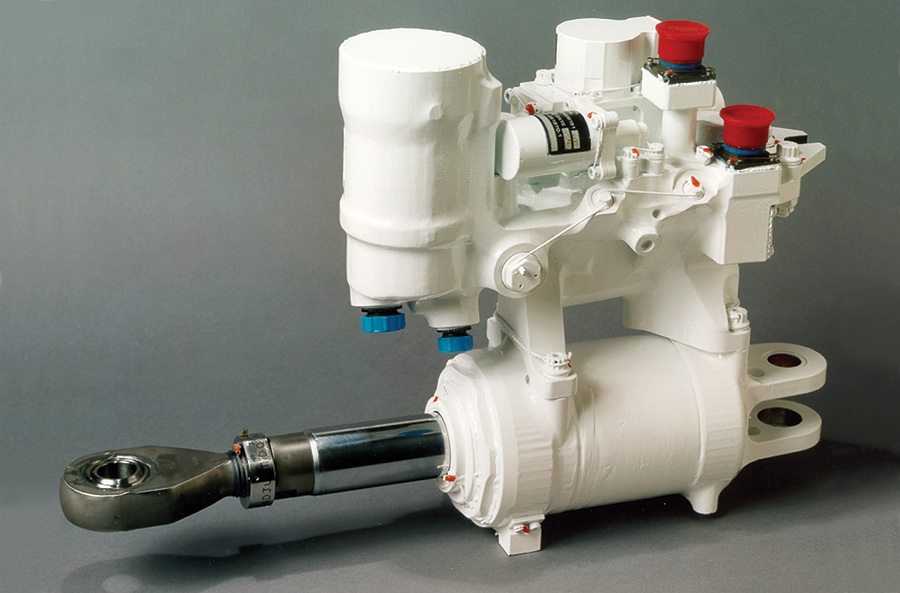 A few attempts have been made to use cable control systems to constrain un-mass-balanced ailerons enough to prevent flutter. Depending on the control cables of a manual system to constrain the aileron enough to prevent flutter is very risky. The tension in the control cables must be high to keep things safe, and the system is not tolerant of any stretching or mis-rigging of the aileron control cables. The cables can stretch over time and loosen, or change length a little bit due to changes in temperature. If this happens, the airplane can become flutter-prone with little or no warning as the result of a subtle change that is difficult or impossible to detect during preflight inspections.

Depending on control cables to prevent flutter makes the cables safety-of-flight critical structural components of the airplane. It is common practice to require that a manually-controlled airplane be able to survive disconnect or failure of a single control and remain sufficiently controllable for the pilot to land safely. If a control disconnect leads to aileron flutter, this requirement is obviously not met.

For airplanes with manually controlled ailerons, mass balancing is the preferred, and much safer, way of preventing aileron flutter.

One final caveat: More than one fatal homebuilt accident has been caused by builders omitting or modifying mass balances. This is an extremely dangerous thing to do. Any change to the mass balances on an existing design invalidates the flutter-cleared flight envelope of the airplane and can lead to flutter at well below the published never-exceed speed of the original design.