When homebuilders describe their projects, they often mention structural beef-ups or modifications intended to make the airplane stronger. When we fly, our lives depend on the structural strength of our airplanes. It is natural to want to make it stronger to get that extra little secure feeling.

Unfortunately, many of these changes have no positive effect on the airplane, and some are actually detrimental to either the performance or safety of the machine.

Modifying the structure of an airplane is a non-trivial undertaking. Changes should only be incorporated if they really do make a meaningful improvement to safety or performance.

The first question to ask before any change to an airplane structure is, “Is this modification really necessary?” If the structure is already strong enough to handle the loads it will encounter in flight, there is no virtue in making it stronger. Beefing it up will not make the airplane safer.

The second question to ask before modifying an airplane structurally (or any other way for that matter) is, “Do I know enough to make sure that the modifications I make will have the desired effect and be safe?”

This is vitally important. There are many ways a builder can inadvertently do harm with structural modifications intended to add strength. 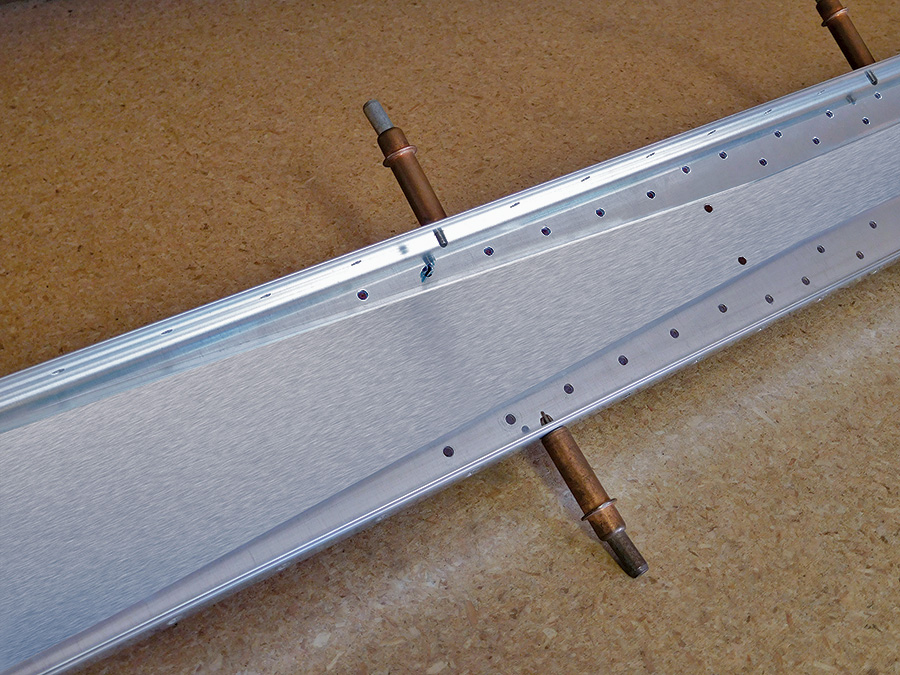 These spar doublers have been tapered to prevent stress concentrations where the ends of the doublers would otherwise form a step with the spar. If the doublers weren’t tapered, the spar would likely fail at a lower load with the doublers than it would without them.

Weight is the enemy of performance. A good airplane structure must be light as well as strong. Adding weight to the structure will hurt the performance of the airplane.

Adding weight to an airplane can trigger a rapidly diverging nightmare. Any modification that adds weight to one part makes it necessary to modify other components to carry the newly added weight. These modifications will also add weight. The final weight growth is far greater than the weight added by the initial modification.

For example, if a builder beefs up the fuselage structure, the wing must now carry more weight. In order to keep the limit load factor (Gs) the same, the wingspars must get stronger, making the wing structure heavier. Since the airplane is now heavier, the landing gear must also get stronger to handle the increased landing loads, and the structure the landing gear attaches to must be strengthened, adding still more weight. This process cascades through the entire airplane.

The increased weight will hurt performance. If the builder wants to retain the same range, payload, and speed in his modified, heavier airplane, he must increase its fuel capacity and horsepower. Of course, both the extra fuel and the bigger engine add still more weight, and so it goes. Each added bit of weight imposes extra loads on other parts of the airplane, and they must each be reinforced in turn.

Runaway weight growth has hurt many airplanes, and the rate of weight growth once the process has started is surprisingly high. The art to designing a good airplane structure is to make it strong enough without making it too heavy. Once the designer has achieved this, poorly thought out modifications will usually do more harm than good. As a rough rule of thumb, adding one pound of arbitrary dead weight to an airplane increases the takeoff gross weight about five pounds, if the performance of the airplane is held constant, and all of the changes necessary to accommodate the initial pound of weight increase are made.

An alternative approach is to compensate for the weight increase of beef-ups by reducing the payload or fuel load of the airplane. One must ask, at this point, if the airplane has really been improved by modifications that made it heavier and reduced payload and/or range.

Attempting to strengthen a spar by adding doublers can actually make it weaker if the doublers end abruptly. The notch between the doubler and the mainspar causes a stress concentration at the end of the doubler.

Sometimes an attempt to strengthen a structure will actually weaken it. There are many ways this can happen, but we will look at two of them.

Stress concentrations: There is a phenomenon called a “stress concentration” or “stress riser,” which is a matter of concern for all structural designers. If a loaded member has a hole or a notch in it, or changes cross-section suddenly, very high stresses will be induced locally in the material right near the shape discontinuity.

The load being carried by the part of the member that was cut away must suddenly find another load path. If the cut is abrupt, as is the case with a notch or a step, the load does not have room to smoothly redistribute itself uniformly across the member, and most of it ends up being borne by the material right near the base of the notch or step. This material is very highly stressed and may fail at a relatively low overall member load. A good structure should be designed to avoid such stress concentrations.

A common form of this error is adding doublers to reinforce spar caps or webs. Many builders add doublers, or extra plies to the inboard portions of spars, to make them stronger. If the doublers are not properly tapered, there will be a stress concentration where the end of the doubler forms a step in the spar material. The spar will probably fail just outboard of the end of the doubler, at a lower load than a spar without the doubler.

Stress risers can also occur around bolt holes and lightening holes. If a modification involves adding fasteners in a place where there were none before, the stress concentrations around the fastener holes can be a significant problem.

Flutter: Changing the stiffness and/or the mass distribution of an airplane structure changes the critical flutter speed. Which way it changes depends on the details of how the modification affects the natural frequencies and mode shapes of the flutter modes of the airplane.

Changes that increase the stiffness of a fixed flying surface (wing or tail) will usually increase the critical flutter speed. This is not a guarantee of safety. It is possible that, while increasing the stiffness of the surface, the modification will also change how it deflects, and cause other problems. At least one airplane I know of has had wing failures caused by stiffening the structure in the wrong place, which changed the way the wing twisted under load.

This kind of change can also, in rare cases, cause a new, unexpected flutter mode to appear. I have encountered this once in my career, when a change in the stiffness of a landing gear door caused a large change in the way the door moved under air loads. This change introduced a previously insignificant flutter mode. On its first flight, the airplane lost a landing gear door when it fluttered off. Fortunately, the door did not hit anything vital as it departed, and the airplane landed safely. Had it been a tail surface instead of a landing gear door that fluttered, the story would not have had as happy an ending.

Changes to control surfaces are particularly likely to cause problems. One thing that should always be avoided is any modification that moves the center of gravity of a control surface aft. This is almost sure to reduce the critical flutter speed. Flutter speed is so sensitive to control surface mass distribution that on some production airplanes (notably the V-tailed Bonanza), an improperly done paint job can move the control surface CG enough to cause flutter. I have seen more than one case where builders added plies to “strengthen” the control surfaces of a composite airplane. This type of modification actually makes the airplane much less safe. The control surfaces as designed are already strong enough and stiff enough to handle any loads they will experience over the approved flight envelope. Adding plies to the control surface skins moves the center of gravity of the control surface aft, and makes the surface heavier. Both of these mass properties changes make the surface more flutter prone. At best, if the builder adds extra mass balance to compensate, the airplane will be unnecessarily heavier. Without the additional mass balance, the airplane will be much more likely to encounter flutter within its previously approved flight envelope. This is very dangerous, and the possibility of flutter should be treated with the utmost seriousness and care.

Modifying the structure of an airplane is a major step. It can have many effects, not all of which are obvious. Some of these effects can be very dangerous, since they may significantly weaken the structure. If the structure of the airplane you are building is adequate to take the expected flight loads, it is a good idea to leave it alone, and build it as designed. If you feel you must modify the structure, make sure that the effects of the modifications are carefully analyzed by a properly qualified person before you make them. Proof-loading of a modified structure before flight is a safety must. Modifying an airplane structure by eyeball estimation and guesswork is a form of aeronautical Russian roulette, and you never know when there is a round in the chamber.