Serendipity strikes again. Just like the Atlantis spacecraft (which departed earth 15 minutes before I wrote this), we have a Go for TEI (trans-earth-injection) for our newly designed wind tee. While the first attempt at Back Yard II wasn’t quite as pretty as I would have hoped, this second iteration came together perfectly. The batteries just fit into the 1.5-inch diameter water pipe, the circuit board fit easily into the pipe-fuselage with all the parts, and it lit up like a Christmas tree when I first fired it up. Like the man said, the harder I work, the luckier I get.

Lets talk about some of the things we achieved with this design that were lacking on the original Back Yard I. First of all, those of you with Pietenpols will surely admit that maintaining a wood structure that is exposed to the outdoors 24/7/365 is a challenge. Paint peels, wood rots, glue hardens and cracks with extreme cold, then there are the fungus, bugs and all the rest of it. Those of you with EZs, Cozys, and the like know that if you keep the UV away from plastic, there is little if any deterioration from the elements.

Second, we made the switching power supply bone-yard simple. While we had cubic feet of storage space inside the original wood design, we have only cubic inches of space in this version, all of it circular. No frills. Just charge the batteries when the sun shines, please.

The same goes for the lighting. Take everything out of the original design that didn’t absolutely need to be there. Run the lights on a little less current than the original design, and, by the way, make it leaner and meaner on wasted power by running the LEDs in series where we can, and don’t use wasteful current-limiting resistors for each of the LEDs.

Make the anti-collision light brighten and fade like you would see on a real rotating beacon, rather than a sharp on-off flash. Yes, it cost me an additional capacitor and resistor, but we’ve taken so much out of this little rascal now that we certainly have the room.

Finally, provide some drain holes on the underneath side so that the inevitable tiny water leaks from the rain and snow have some way of departing the inside of the pipe rather than collecting and corroding the electronics. Lets take a trip through the electronics. Power supply first.

The heart of this design is the venerable MC34063 (about $1 at the usual parts supply suspects). This is a switching type regulator that takes all of the power available to it from the solar cell and converts it to the voltage required to recharge the nickel-metal hydride four-cell battery used to power the lights. While the NiMH batteries are 1.2 volts nominal (4.8 volts with four of them in series), they require more like 1.4 volts to fully charge them. Therefore, R102 is adjusted with the battery disconnected to give 5.6 volts at the battery connector (cathode of D103). D104 and D103 are special low-drop (and low-cost, about two bits) Schottky barrier diodes that drop less than 0.2 volts as opposed to a plain old silicon diode that will drop half a volt. This voltage-drop savings is a part of what I referenced before when I said this design was more efficient than the original. 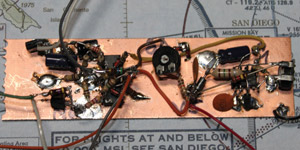 The breadboard circuit on a scrap of PC board that was cut to fit inside the 1.5-inch water pipe fuselage.

Normally L101 would be a somewhat moosey and expensive toroidal inductor, but by using some fairly decent ferrite cores, we can get this inductance in a package just a little bigger than a half-watt resistor and at a cost of about a buck (Bournes/Miller 5300 series). R105 limits the current through this inductor to 250 mA, which is less than half of what the inductor is rated for.

D101/102 in series gives about half a volt for each diode, and R101 adjusts the voltage at VB to the series equivalent of those two diodes to 1 volt.

The solar battery is practically the only part that we used in the original power supply. This is the standard Harbor Freight 1.5 watt array (#44768, $20). 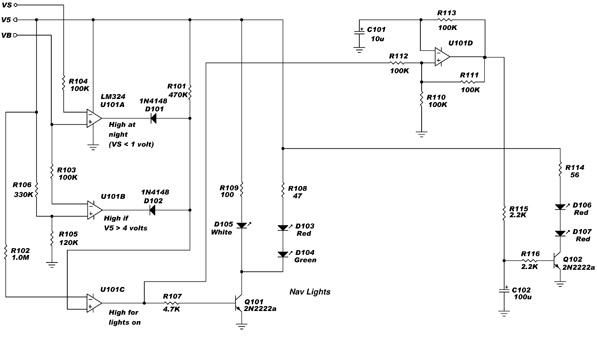 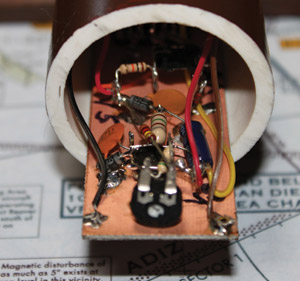 U101 is the venerable old LM324 (two bits anywhere in town). U101A compares the voltage put out by the solar battery to the 1-volt VB (voltage bias) constant voltage from the power supply. When the solar cell is putting out less than 1 volt, we presume it is night and the output of this amplifier goes full high (nearly the V5 battery voltage), which reverse biases D101 so that no current is drawn from R101. However, as the solar battery begins to go above 1 volt (sunrise), U101A output goes to zero volts and most of the current through R101 is shunted to ground through D101.

U101C decides whether to turn on the lights. If it is daylight or if the battery pack is starting to fade, then either U101A or U101B shunts most of the current through R101 to ground and the bias set by R102 turns U101C off (zero volts output). If it is dark and the battery pack is charged, the bias set by R101 overcomes the bias set by R102 and U101C goes high. This in turn biases Q101 on and current is then drawn through Q101, which in turn, draws current through D103 (port nav light), D104 (starboard nav light) and D105 (taillight). 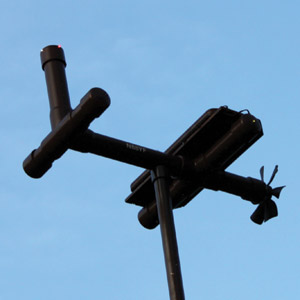 As advertised, the lights come on exactly at sunset.

U101D is configured as a square-wave oscillator with a period of about 1 second. That is, it first goes high for about half a second, and then goes low for half a second, then high. However, this is only possible with bias voltage through R112. This only happens when U101C output is high, and so U101C controls whether U101D will oscillate. In the non-oscillating state, U101D output will stay low. When U101D output goes high for half a second, it turns on Q102, which in turn illuminates LEDs D106 and D107 (rotating beacon). R115 and C102 slow the turn-on and turn-off of Q102, and thus provide the brighten/fade of these LEDs.

Whew. I thought this turkey would never get done. However, now that it is complete, Im as happy with it as with anything Ive ever designed.

Tell you what…let me get my students final exams graded, give them a permanent grade, attend their graduation ceremonies, annual the airplane and plant the garden, and then Ill start thinking about what Im going to do for next month.

Print Your Own Parts