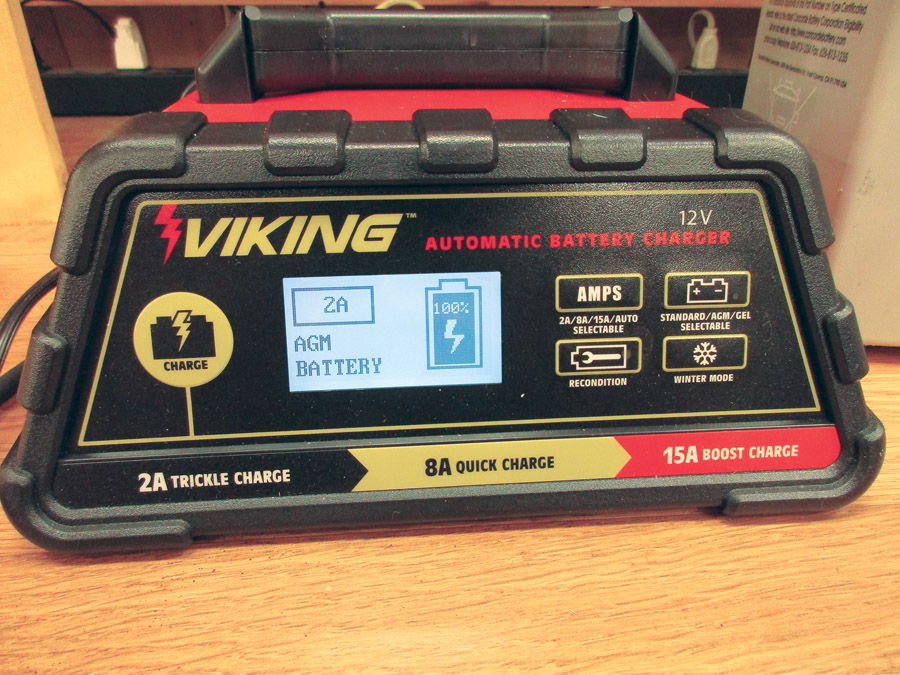 The Harbor Freight battery charger hooked up to the dead Concorde battery out of my ’58 Cessna 182.

This will be a first for me. Since I started writing monthly columns in 1977, I have never written about a commercially available product. Parts? Sure, lots of articles about transistors, integrated circuits, and every now and again a computer program, but never before a product. It took a real whizbang of a device to make me break that mold.

But when a $40 product1 from Harbor Freight saves me a $300 battery, it is worth writing about. The problem is that I can only write about how it works, not why it works. The “why” comes from chemistry, and while I have quite a few college credits in chem, I make absolutely no claim to completely understand how a couple of lumps of lead in a sulfuric acid2 solution does the batting in the battery box.

Having made that caveat, let me confess to having written a battery desulfation column [“The Battery Sulfate Buster”] for KITPLANES in April 2002, and that design worked…sort of. Since my battery chemistry wasn’t any better 15 years ago than it is now, it was strictly by trial, error, and doing basic “research,” i.e., stealing ideas and thoughts from others who had written about desulfation in print3. 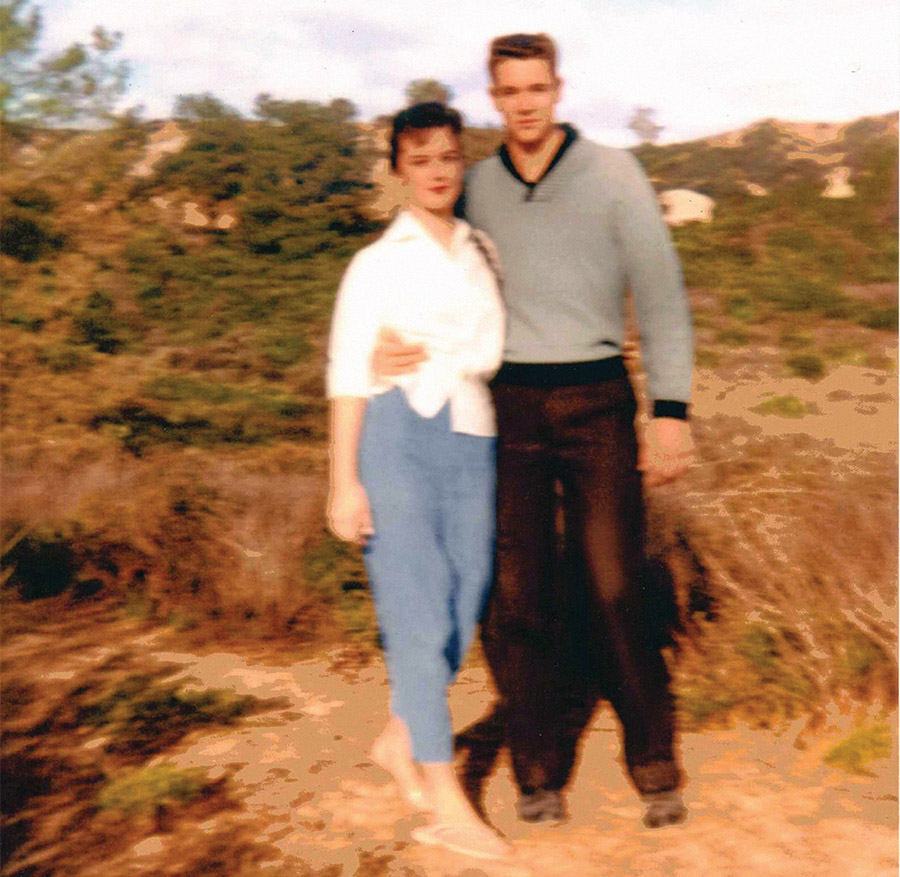 Battery sulfation caused two young lovers (me and my future wife Cyndi) to become stranded on a remote lovers’ lane at 2 a.m. in 1960. We called Cyndi’s father, who came to the rescue with jumper cables to jumpstart my ’51 Chevy.

I will tell you that I just about scared the pants off of myself going back into the archives to see what I wrote way back in 2002. I related a story about my 1960 high school days and a dead sulfated battery in a ’51 Chevy in the San Diego local lovers’ lane at 2 a.m. with my high school sweetheart. Little did I know that in 2012, that sweetheart and I would cross paths once more, with a resultant marriage to her a year later. Scary.

But I digress. When it came time to test the ADS-B in the faithful old ’58 Cessna (and get that $500 rebate from the Feds), the prop would not turn over. It seemed that I’d be buying a new $300 battery to get the engine started and earn that rebate until I ran across an ad for a Harbor Freight battery charger. Not just any charger, mind you, but one that has a “rejuvenator” feature built into it.

Sure, sure, just another variation on “sulfate busters” that juice the battery up for a day or two and then let it go flat again. Not so this time. This time, somebody really got it right, and say what you wish about HF, this sucker works. I tried the old “full-discharge, recharge, discharge, recharge…” with a regular old battery charger, but no soap. I couldn’t get it to hold a charge but for about 6 hours, and then it was back to not wanting to turn the prop over.

Four cycles of discharge-rejuvenate with the HF #63299 did the trick. That battery has been tested half a dozen times over the last couple of weeks and it fires right up, just like it did when it was new—14 years ago. 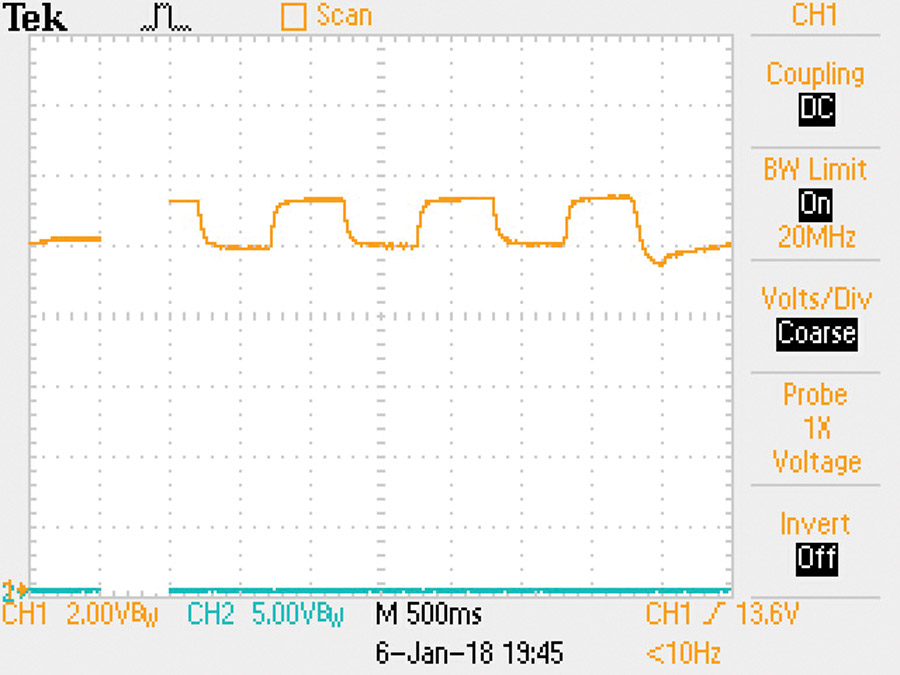 So, the how? The rejuvenate function starts off with a square wave that stabilizes between 10 and 15 volts at about 1 wave per second. If I were a guessing person, my guess would be that the internal microprocessor in the charger is looking to see how much current flows during the individual data points on the wave and thus gains some sort of indication as to whether or not the battery contains sufficient capacity to be successfully rejuvenated. But that is just a guess, nothing more.

After about 10 minutes of this sort of square, sort of sawtooth wave, the main rejuvenation effort begins. This phase is a relatively constant current charge for about 95% of the time and a sharp positive pulse going from whatever battery voltage the battery is charged to, and then a very sharp narrow pulse going up to about 16 volts, ten milliseconds wide, one time a second. This is in sharp contrast to most “desulfators” that put out a whopping 40- to 50-volt pulses. Once again guessing, I’m thinking that whoever designed this charger found that more pulses of lower voltage fewer times a second for a longer time does a better job of busting the sulfate crud that accumulates on a discharged battery and possibly (again, remember I’m guessing) somehow dissolves the lead sulfate back into the sulfuric battery acid. 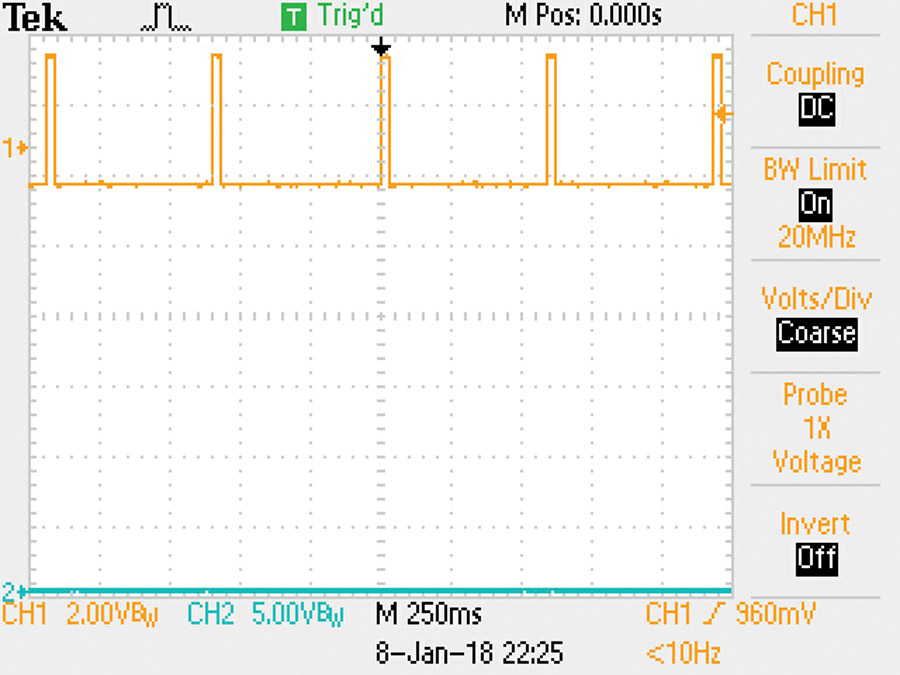 Once the battery voltage gets to about 12 volts, the rejuvinator starts whapping the battery with 12- to 16-volt pulses to break up the sulfation. It’s an interesting design, one that I’ve never seen before.

But wait, there’s more: For both rejuvenation and normal charging, there are three choices to be made. This device can do separate programs for regular flooded plate, gel-cell, and AGM batteries, and is fine-tuned to the differences in these three common technologies.

Battery charging is a science in and of itself. Lead-acid batteries (be they flooded, gelled, or matted) go through a three-part process in the charging regimen to maximize life. In general, you charge a battery to about 80% of capacity with a constant current for 3 to 6 hours until it gets to about 14.1 volts. Then you apply a top-off constant voltage until the charging current goes to some very low number around 5% of the amp-hour rating (1.75 amps for the common 35-amp-hour aircraft battery) for the remaining 20% of rated current. Finally you apply a continuous float voltage somewhere around 13.5 volts that simply replaces the leakage current that all batteries have.

It sounds so simple, and yet there are enough differences in the three battery technologies that this “around” voltage of which I speak varies just enough that it is necessary to make a charger with separate processes for each of the three. In the sub-$50 range, this HF charger is the only one I’ve seen that takes these three different technologies into account.

The HF battery charger confirming that it was using the AGM (Advanced Glass Mat) battery regimen for this battery.

Not only that, the numbers I gave you above are accurate at 25 C (77 F), but higher temperatures mean a lower charging voltage, and lower temperatures require a higher voltage (approximately 3 millivolts per degree C in both directions). Again, these folks thought this charger through, and it has a “winter” mode that adjusts for colder temperatures.

Finally, you have your choice of regular old charge current. Two amps of trickle charge, 8 amps of quick charge, and 15 amps of boost charge. Each one reverts to the “float” voltage/current mentioned above when the battery is fully charged.

And why did I need this battery to start the airplane again? Ah, yes, the rebate flight on the new ADS-B Out box. More about that next month. Much more. Until then…Stay tuned…

1The actual “list” price on the Harbor Freight website is $50. However, I’ve never paid list price at HF in my life. Every month or so, their latest flyer comes in the mail, and it generally has a 20%-off coupon for anything in the store…including this charger. That makes the price $40, which is what I paid for it. Aren’t on the HF mailing list? There’s a fellow who keeps a list of the HF coupons at http://struggleville.net/category/harbor-freight, and you can print out nearly any coupon you wish.

2Those of you reading the archives 10 years from now will marvel at how we managed to survive with such things as lead-acid batteries when lithium-unobtanium batteries are so superior, just like I wonder how my progenitors got along with vacuum tubes when transistors are so easy to make.

3Using another person’s work as a graduate student is research. Using it as an undergrad is plagiarism.

When I wrote the first part of this column on the Harbor Freight battery charger, I focused on the “rejuvinate” function. It was only by random chance that I happened to leave the setup going while I was writing the column. Much to my surprise, I was contemplating how to disassemble the test setup when the oscilloscope “glitched.”

I thought perhaps I had jiggled the scope probes, but it started glitching again about two seconds later. This was no fluke. It had entered the “auto” mode, where I thought it kept a trickle charge on the battery after it had rejuvenated.

Not so. The auto mode, which is intended to keep the battery charged between uses, isn’t a simple trickle charger. It actually follows the Concorde (and other AGM manufacturers) regimen that recommends a pulse up to the maximum voltage that the battery can take, called the “initiation” mode. Next is a float voltage, then a slow self-discharge down to a normal lead-acid resting mode. This cycle slowly repeats to keep the battery at full capacity.

Lo and behold, this little jewel has been programmed with the internal microprocessor to be smarter than a simple trickle charger. The whole charge-discharge cycle takes about half an hour, which is why I didn’t see it on the first go-around. I mean, looking at the face of an oscilloscope to see something that takes a fraction of a second every 30 minutes is only slightly more interesting than watching paint dry. 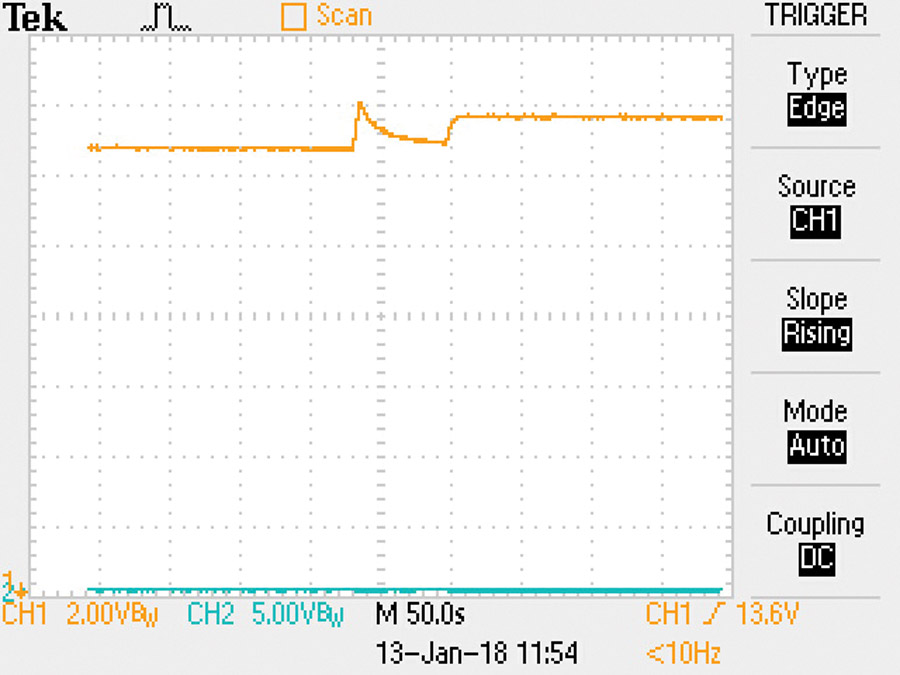 Starting on the left, the battery is just a little above 12.8 volts. When it hits 12.8 volts at a little before the 5-minute point, the heavy charge takes it up to 14 volts or so. It takes a second or two to go back to about 13 volts, and then it goes back up to 13.5 volts, where it stays for the remainder of the trace. 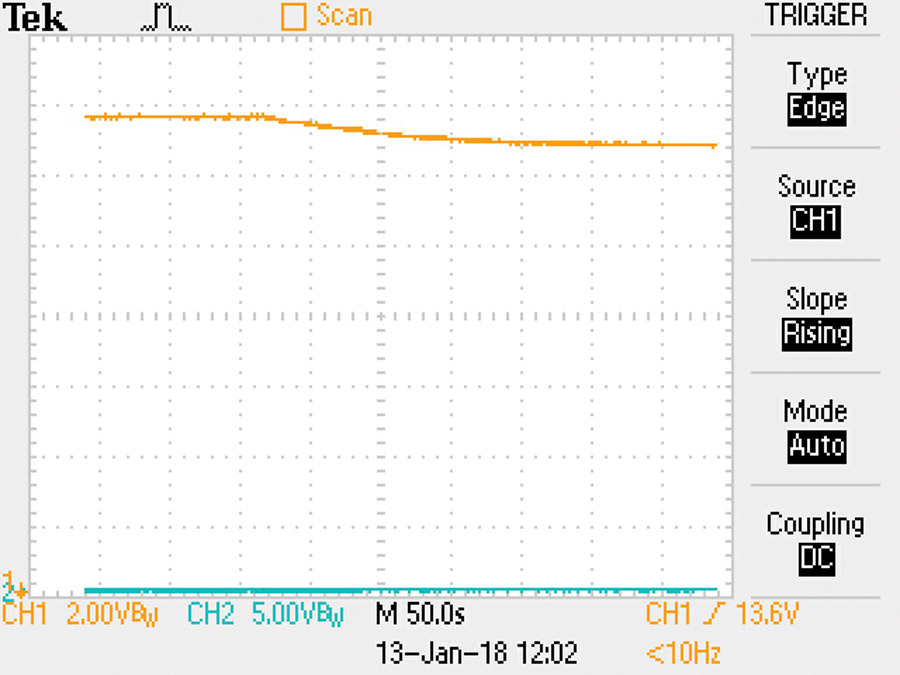 This image was captured about 5 minutes after the first image. About 3 minutes into the scan, the 13.5-volt trickle current goes away, and the battery begins a long, slow decrease to the 12.8-volt point. 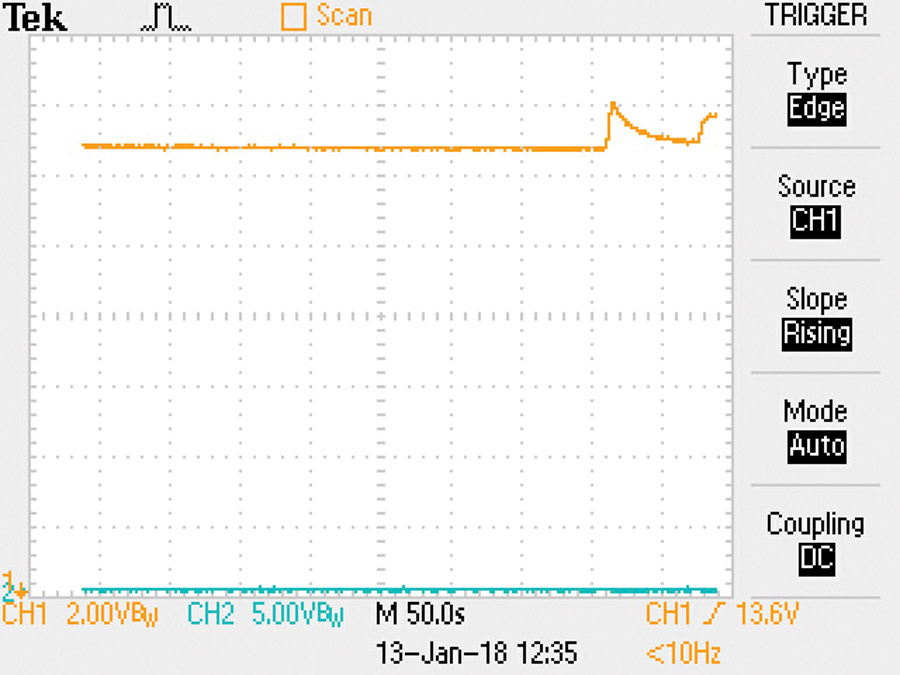 This image picks up where the second image leaves off. About 9 minutes into the scan, the battery gets to the 12.8-volt point, the charger boosts it up to the 14-volt area, and the whole process starts all over again.

Here is what is happening: First we start off with a battery that has self-discharged to about 12.8 volts. At that magic spot the glitch I saw was the pulse taking the battery at about 2 amps up to 14.2 volts, which takes a little less than a second. Then the charger lets the battery self-discharge to somewhere on the order of 13.5 volts and keeps it there with a relatively low trickle current of about 20-30 milliamperes. After 15 minutes or so of this, the trickle current is removed, and the battery is allowed to self-discharge to 12.8 volts. This takes about another 15 minutes. Then the magic pulse comes along to drive the battery up to 14.2 volts again, and we repeat the cycle every 30 minutes (shower, lather, rinse, repeat…) so long as you leave the charger connected.

I have not had the opportunity to check this charger in the gel or flooded mode, but I suspect that it is “smart” on those modes as well.