“If you are stuck here with no one to help you, this is the oasis.” 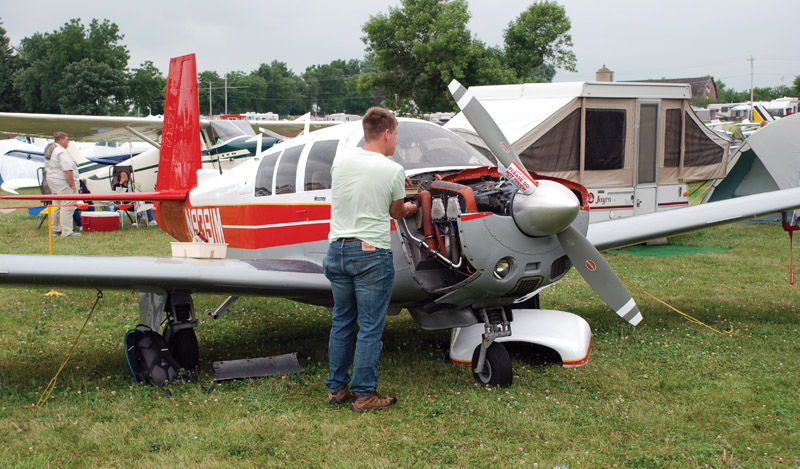 Many but not all planes are moved up next to the Emergency Aircraft Repair Center where tools and help are nearby. This Mooney owner appreciated the help he got sorting out an electrical problem that had him stuck on the ground. A new voltage regulator got him going again.

It is truly a bad feeling to be broken down far from home with your plane, but at AirVenture this year, and every year for a long time, there is someone to call who can help: the EAA Chapter 75 Emergency Aircraft Repair Center, affectionately known as Galley’s Garage. They have been bailing aircraft owners, both certificated and Experimental, out of jams since 1963. They started out in a tent, but now have a permanent facility stocked with aircraft tools of every variety and even a few parts. 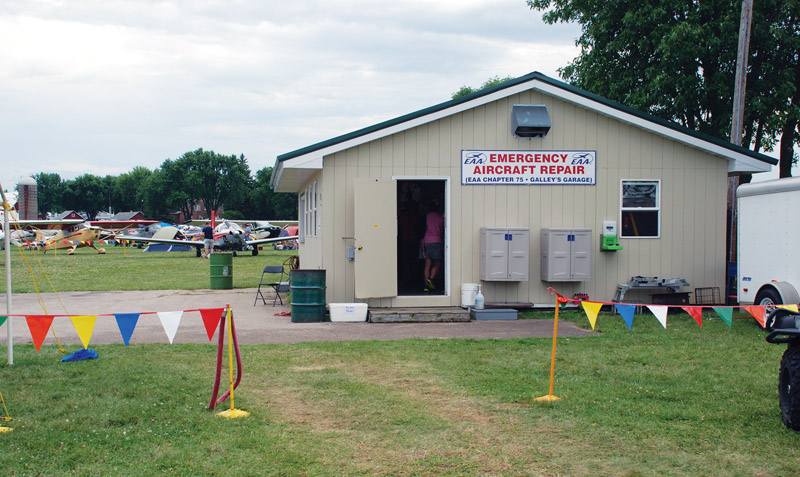 An inauspicious but vitally important building located near the tram stops for the red and green lines houses a group of special volunteers from EAA Chapter 75 who are dedicated to getting your plane going again quickly and safely.

The Emergency Aircraft Repair Center (EARC) is there primarily to loan tools and offer advice, so aircraft owners can fix their planes themselves. They are not for hire and will not sign logbooks for legal and liability reasons, even though many of the volunteers are licensed A&P mechanics. That said, they have been known to turn a wrench or two for someone in need, unofficially of course. Their goal is to get aviators home safely. They do what they can to contribute to that end.

Most problems presented to Galley and his crew are simple ones: dead batteries, flat tires, damaged tailwheels, and fouled spark plugs predominate. But they do whatever they can for anyone who asks. During one visit, they were called to help move some WW-I replica fighters across the airport because taxiing them with tailskids was likely to cause problems. Having moved more than a few disabled airplanes over the years, they were hardly even phased by such a challenge. On another visit they were busy putting air in the tires of a stroller for a mom who was struggling to push her child around the AirVenture grounds. This may sound trivial, but it is harder than it looks. It is very easy to put too much air in a stroller tire and blow it completely off the rim. This they know from previous experience. 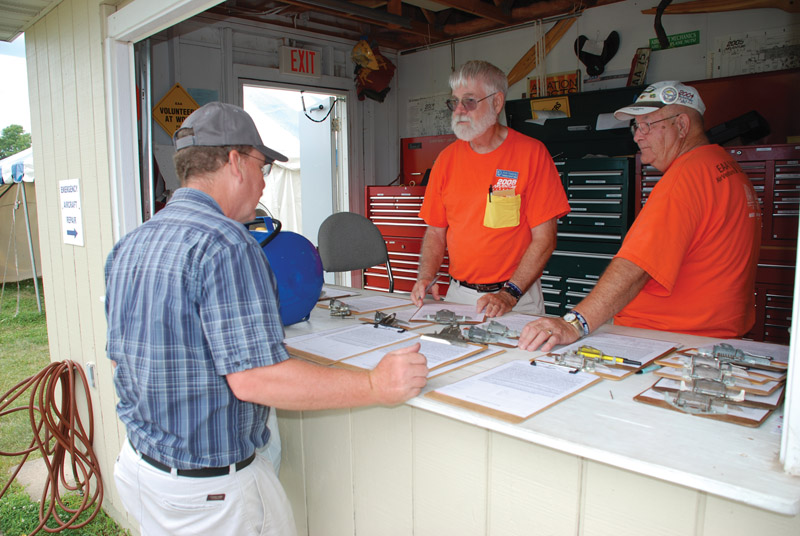 Often just the loan of a few tools is enough to get an airplane going again. Here the staff checks out some tools to an aviator in need.

If all of this sounds pretty easy, such is not always the case. One time a RANS S-7 got badly bent in a landing accident. The EARC mobilized their best welder and a few fabric experts and performed a major repair on the bent fuselage longerons, afterwards recovering the fabric on that section of the plane.

During last year’s AirVenture, a distraught Mooney owner was trying to sort out an electrical problem with his plane. The EARC people were able to help him identify the voltage regulator as the culprit and save him the cost of a new alternator in the process. All in a day’s work for the Chapter 75 staff.

In their shop the EARC is equipped to do sheet metal work, welding, composite work, and fabric repairs. In most cases, if you can get the parts, they can get you going again safely. However, if you have a big enough problem to involve an insurance claim, they must stand aside. They are not a professional shop and do not wish to be. There are FBOs on the field that can do that job. For those who have major damage and wish to fix it themselves, the EARC has helped a number of people ship their planes home. 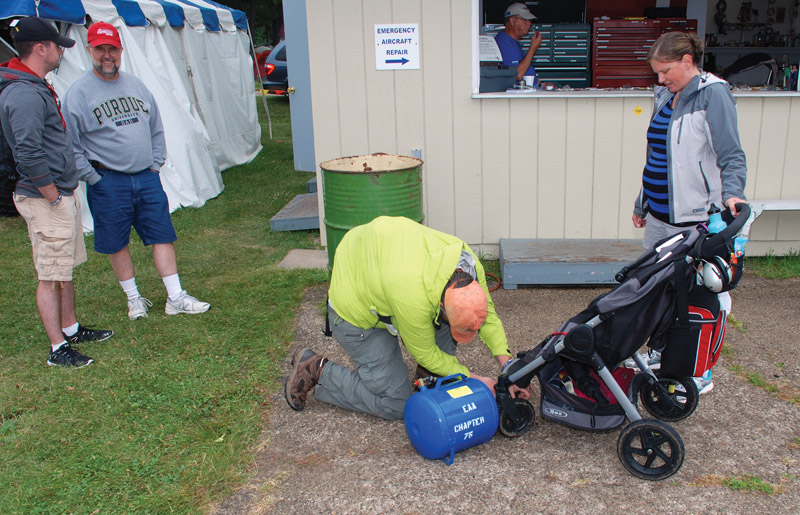 Not everything the Chapter 75 crew does involves an airplane. Here a struggling mom gets some air in the tires of her stroller.

The Rain Keeps Them Busy

Rain always means extra work for the EARC. RV builders with forward-facing fuel injection who forget to drill that little hole at the bottom of the air intake often find their engines full of water after a hard rain. It can be a project to take everything apart and dry it out, but the EARC knows just how to walk an owner through the process and get him or her going again.

The rain also produces plenty of wet ignition systems. Cessna 195s are particularly vulnerable to this problem, which is why many of them put covers over the gap between the cowl and the fuselage when parked at Oshkosh. Unfortunately, not all of them do, but the EARC is well equipped to handle the problem. Water in ignition systems, fuel tanks, and even carburetors come every time it pours at AirVenture; the EARC has the tools and know-how to lend a hand and get you safely on your way home when it does. 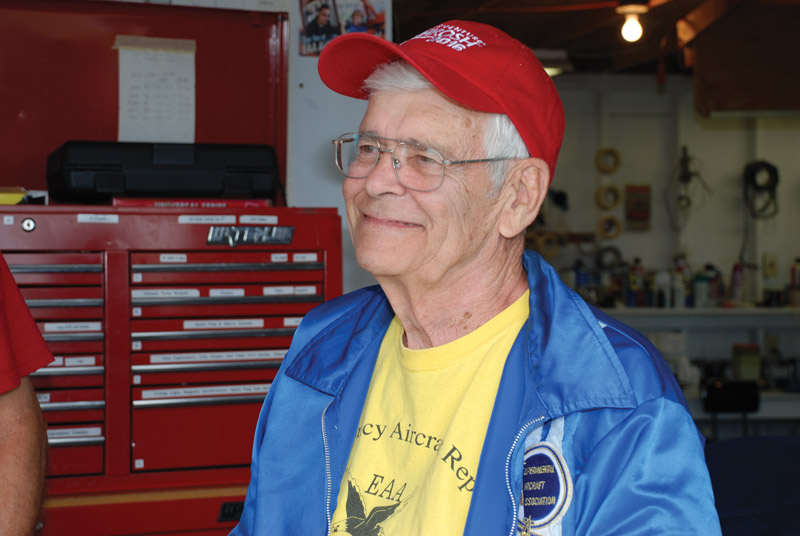 Cy Galley is the man who organizes the Emergency Aircraft Repair Center for Chapter 75 every year, which is why they call it Galley’s Garage. He personally vets every volunteer to make sure AirVenture participants get the expert help they need to get underway again safely.

Who Are These Guys?

Who are these dedicated volunteers who for over 50 years have been assisting pilots in trouble at AirVenture? They are exclusively members of EAA Chapter 75, Quad Cities. Those cities consist of Rock Island and Moline, Illinois, and Davenport and Bettendorf, Iowa. You may recognize Moline as the home of the John Deere Company, the famous maker of tractors and farm equipment. Many of the EARC volunteers work for Deere or at least once did. Anyone attending AirVenture knows that John Deere has been very supportive of EAA over the years and has also been generous to Chapter 75 and their efforts.

Cy Galley, the chairman of the EARC, insists that all volunteers be members of Chapter 75 and be vetted by him for their mechanical competence and their ability to work with people. Every year he selects a team of about 40 people to work at the center for the week. There are slack times to be sure, but at other times it seems as though every single one of them is busy helping someone. It is quite a tribute to Chapter 75 that they can, year after year, come up with so many competent and willing volunteers to do this important job.

The members of Chapter 75 have received generous support from John Deere and Snap-on Tools over the years. Other than that, they just go out and raise the money they need themselves. They funded and built their own building on the AirVenture grounds and secured much of the equipment they use to help others through their own efforts. Their service to the aviation community is a shining example to others. If you are broken down at AirVenture, you know who to call: the Chapter 75 Emergency Aircraft Repair Center. 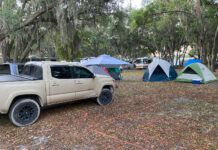 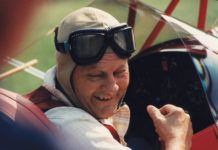 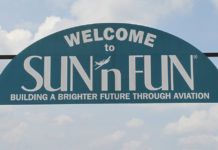 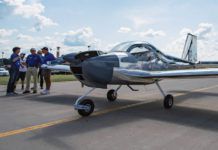 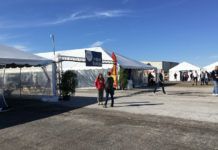 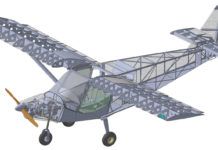 To Launch A Light Sport

Bob Fritz - July 19, 2008
0
Author Bob Fritz got the bad news that he would likely not pass his FAA medical and was faced with a choice: Finish the RV he was working on and resign himself to flying with a partner, or try to find a suitable Light Sport Aircraft that he could build and fly solo. In this first installment in the series, he details his search for the right design and reveals the decision he ultimately made.