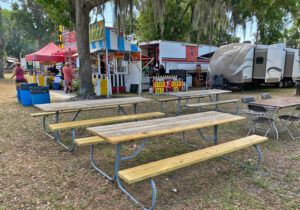 Some of the best moments of this week-long adventure occur at picnic tables. This morning Forrest and I grabbed an early breakfast at the food trailer set up by the Corn Roast venue. As I made my way through a tasty Denver omelette, a fellow traveler sat down beside us with a plate of pancakes. Social boundaries evaporate when dining al fresco at an airshow with ten thousand of your closest pilot friends. Fellow Traveler (we never actually exchanged names) asked us if we flew in and where we were from. Something told me that Fellow Traveler had a much more interesting story than Forrest and I. I immediately went into cross examination mode.

Fellow Traveller came in from California in his Grumman Tiger. On the way, he stopped at Ellington Field in Houston, where his father once flew Kaman helicopters (twin tilted rotors, very cool) in support of NASA. One of his missions was to fly top cover for Neil Armstrong during his lunar lander simulator training. This was not a computer generated depiction of how the LEM was predicted to perform. It was an actual aircraft, with thrusters that flew. Armstrong damn near died when he ejected from one a split second before it crashed. On his phone, Fellow Traveller had a black and white photo of his Dad, looking studly in full Air Force flight suit, standing next to Neil Armstrong, looking like a nerd tourist in a Hawaiian shirt. The real deal. His Dad asked him to stop at Ellington on his way to Sun ‘n Fun and to drive by the house in which he and his 5 brothers and sisters used to live. After a mission, his Dad would swing the Kaman over the house, switch on the external speaker, and ask the kids in the yard if they were being good.

I asked Fellow if his Dad was still alive. His eyes were a little moist when he replied yes.

Paul Poberezny, the founder of EAA, once said that this is not about the aircraft, or the forums, or the aerobatics. It’s about the people. Especially the ones sitting at picnic tables.