Jim arrived at the campground in his Tundra truck on Monday, the day before the show is scheduled to begin. He missed the camper’s registration entrance on Drane Field Road and had to circle to land. We quickly set up his large dome tent. All of us old guys have huge tents for just one occupant. We bring cots, queen size blow up mattresses and camp chairs so that we can put our shoes on in the morning without assuming undignified positions. Our enclave is now complete; three tents, three old pilots and two trucks.

Just because the show is not officially open does not mean there is nothing to see. Man and materials flow into the site at an astounding rate. Except for the lemonade stands, it could be a dead ringer for invasion logistics. Men waving and whistling at trucks backing up to disgorge their cargo and then drive off for more.

Jim and I walk around the classic aircraft and end up in Paradise City, checking out the oldest and the slowest along with the latest and the greatest. I got a text from Forrest. He was lost and could not find our campsite. We found him forlornly sitting on a picnic table bench at the corn roast site. Sufficiently reoriented, we found our tents and tied an orange cargo strap around the nearest oak tree, a blaze for our tranquility base.

Later in the afternoon we linked up with Peter, resting comfortably in the master stateroom/suite in his aircraft carrier, CVN-83. He reported that his back went out while walking into the show and that he had to R&R to regain mobility. Thankfully, he had recovered enough to go to dinner with us. We all piled into the Ridgeline and took a tour through Lakeland. The first half of the tour was intentional, visiting the old Florida downtown area. The second half was unintentional, me getting lost trying to find a popular BBQ/Steak joint on Florida Avenue. We finally settled on Longhorn and had a great dinner, along with a discussion of our first cars and/or motorcycles.

As I settled into my sleeping bag, I worried about the speed on our collective fastballs. At some point during the day, all of us had become either lost and disoriented or injured. Sheesh. I didn’t worry long, as the sleeping bag felt good in the cool damp air. 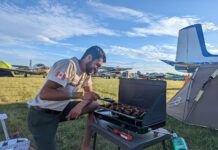