Spring arrived in grand fashion this year, with superlative weather at and a promising outlook from the first big airshow of the year. Yes, Sun n Fun is a blurry image in the rearview. Ill be honest: Given the difficult economy and slow recovery-if, in fact, what were seeing is actually a recovery-I half expected SnF to be a ghost town. As I arrived on site Monday morning-the first time in years Id been on the grounds the day before the show started-my fears seemed confirmed. Whole sections of outside exhibits were empty, and many vendor booths in the hangars were barren.

But as the day progressed, more of the spaces filled in, and by the actual start of the show, SnF looked more like its old self. I worried that I couldn’t find Velocity, its traditional space next to the Glasair Aviation booth filled by someone else, but I later discovered Duane Swing and his crew inhabiting a massive site along the north edge of the LSA area, itself positioned between the main entrance and the first line of outside exhibits. Its cheaper, he explained, sitting in front of his motorhome and gesturing to the large tent with three Velocitys around it.

Initial reports from the vendors agreed that the foot traffic was down but wallets were out, much more so than was the case last year, and there were flickers of optimism here and there. But lets not sugar-coat this: SnF is not the show it once was. Partly, its diluted by other forms of information gathering in our sport. The Internet is beginning to displace the airshow as a means of introducing new product. Indeed, the press conferences this year were lightly packed with true news, and many of the major announcements were done strictly through press releases and in-booth functions. Also, I hear from many exhibitors in the Midwest and West that Florida is just too far to haul people and planes. Their marketing budget is better spent elsewhere.

Conventional wisdom has it that, in times of economic difficulty, the more expensive products sales slacken while the cheaper version expands. I have examples that confirm and refute this theory. Before the first day of the show, I caught up with Kurt Senhert of Legend Aircraft. Legend, as you know, builds both the Legend Cub (in a variety of configurations including a new Baumann-shod amphib) as an SLSA factory-built and as the homebuilt Texas Sport Cub.

Senhert told me that sales were down across the board, but it was the kit that was hurting the most. I think that in this economy, the guys who can afford the $100,000-plus SLSA are less affected than the guys who are in the kit market, he said. This struck me as odd. My instincts say that an airplane will sell best in its least-expensive form during a soft economy, but then thats why Im an editor not an economist. 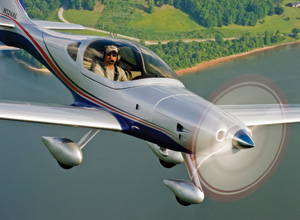 Arions Lightning. It sold better as a kit than as an SLSA at Sun n Fun 2010.

The reverse was true at Arion Aircraft with the Lightning, where the company sold more kits over LSAs three-to-one. For comparison, Arions SLSA sells for $93,900 with basic equipment. There are a couple of panel options including Grand Rapids Technologies EFIS units that take the Lightning into the low $100s, as the real estate guys like to say. The Lightning kit, the same airplane, runs just under $55,000 with the most desirable options, but that includes the engine (a Jabiru 3300) and prop. Avionics, wiring, paint and interior are extra. Builder assistance in Shelbyville, Tennessee, runs $3500 a week.

Rather than read too much into these observations, lets just say that the Legend Cub/Texas Sport Cub appeals to a certain demographic, one that is likely to be exiting general aviations more complicated tier-the Bonanza/Mooney axis, I call it-and returning to a simpler time that is all about pure recreational flying. The sleek, high-tech Lightning might well appeal to a pilot who is coming in or moving up, so the lower initial buy-in, together with the possibility of self-financing over the time period of the build, may just explain the difference. 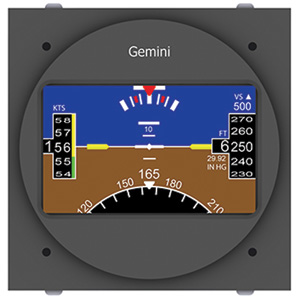 TruTraks Gemini instrument will be available with an integrated autopilot or as a stand-alone flight instrument.

If news on the airframe front was slim, it was hopping where electronics are concerned. Vertical Power showed off its VP-X, a sophisticated electrical-control system using simple switches to control solid-state circuit breakers; think of it as a VP-100 without the phase-of-flight switching logic. Dynon had a big crowd around the booth, and demonstrated new moving-map features and the HSI on SkyView. I got to see and touch an example of MGL Avionics second-gen systems; again, Im impressed by how rapidly this company develops product. Garmin introduced synthetic vision on the G3X. Finally, TruTrak Flight Systems introduced a new line of LCD-based backup instruments. Id heard they were coming, but the range of product was a big surprise. Called the Gemini series and fitting a 31⁄4-inch hole, these electronic instruments will replace the mechanical Attitude Direction Indicator later this year. (As much as I admire TruTraks product, the three ADIs I had in my Sportsman were less than reliable.) A basic attitude indicator will sell for around $1000, and another $300 will add airspeed and an altimeter. An engine monitoring version will be sold, as will a Gemini with an integrated autopilot.

Our continuing efforts to use new media have expanded to include Twitter and Facebook. Our Twitter feed (www.twitter.com/Kitplanes) can keep you informed of the latest happenings from our Newsline section on www.kitplanes.com. Our Facebook page, found at www.facebook.com/Kitplanes, will offer unique content as well as a glimpse of what were working on next. Come join us!

Ron Alexander - June 13, 2008
0
Who knew there was so much to consider when selecting a fabric for your aircraft project? Cotton or polyester? Light weight or heavy? STCs, TSOs, PMAs, FAA requirements. Poly-Fiber or Ceconite systems? Ron Alexander unravels the alphabet soup and explains how and why each fabric may be the way to go for a specific project.