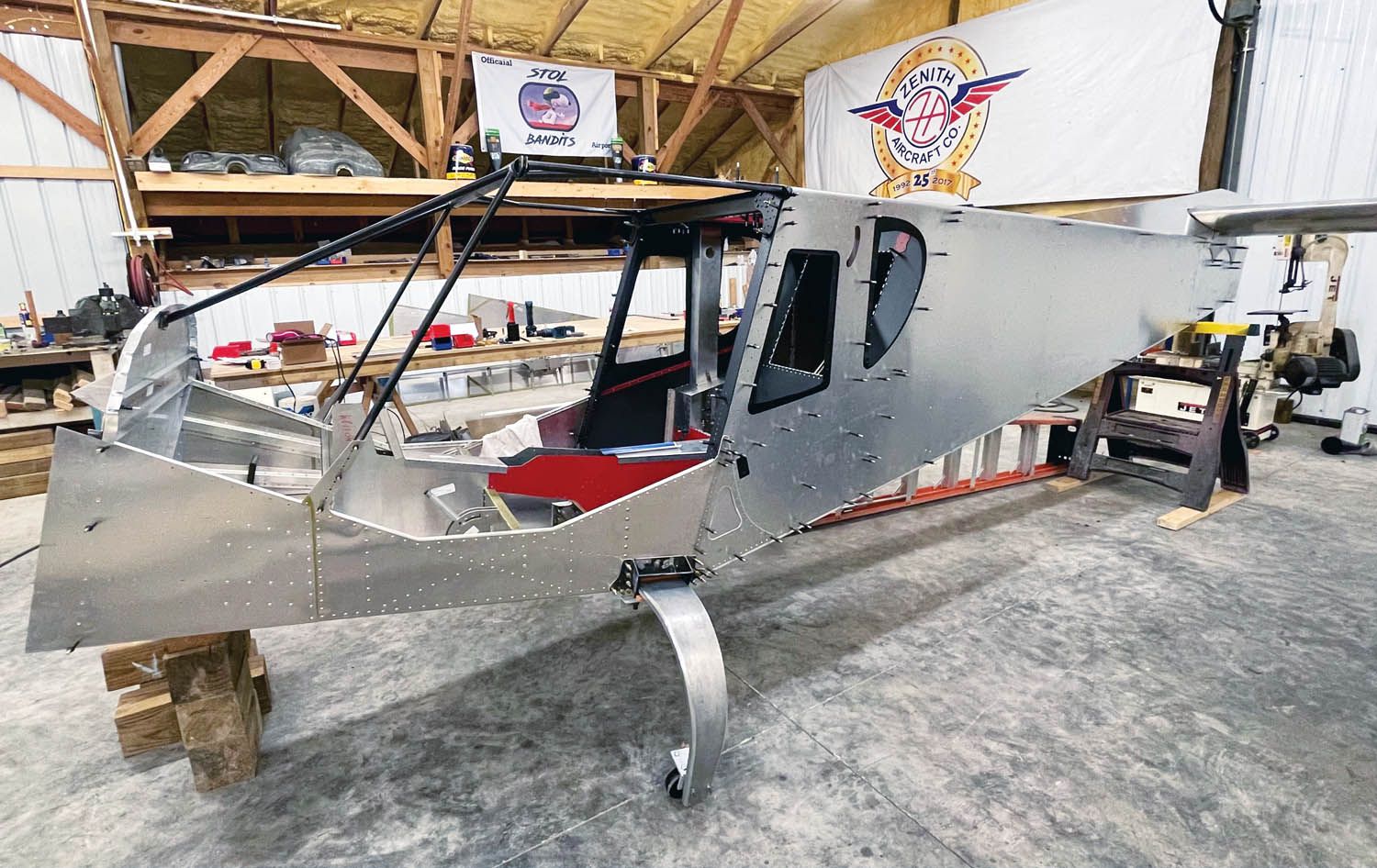 I have told a lot of builders over the years that one of the best ways to guarantee completion of an airplane build is to dedicate regular, consistent time to the project. As with any big venture, it can be difficult to stay focused and make good progress when there are lots of breaks and distractions between work sessions. That said, life happens.

During the past several months, I have been traveling between Missouri and Tennessee, mostly working for Zenith Aircraft Company, but also making short trips back to the farm to be with the family and to make a little headway on the SDX. This has definitely served to remind me that when you know the build session time is limited, it can be very difficult to get in the groove.

However, the break from being directly around the project has also given me an opportunity to fine-tune the desired mission and tweak my ideas for the upcoming components. I spend most evenings these days thinking about the next steps and planning the systems for the SDX. Visual progress on the aircraft has been slow since the last article, but there is definitely progress happening!

Since the last installment, I have temporarily installed the main gear. The main gear for a Zenith 750 Super Duty is a fairly heavy chunk of aluminum formed into a robust “leaf spring.” Luckily, with Zenith’s kits these are easy to bolt onto the fuselage with very little prep needed on the gear itself. This is still the mockup stage for the main gear—meaning it’s not a permanent installation of the component just yet—and I will be removing it again to work on the final finish.

I intend to finish this main gear the same way I did on my Super701, which is basically just sanding down the machining marks and smoothing the bare aluminum before going over it really well with Scotch-Brite. Personally, I like the look of the bare aluminum gear with a brushed finish. I also know that my airplanes will be living off-airport, which is rough on a painted finish, especially with the prop blowing all kinds of debris back onto it.

Another bonus is that maintaining this look on the Super701 has been super easy, making it an appealing choice for the SDX as well. When I finish washing rest of the plane, I simply put a Scotch-Brite pad in the soapy wash bucket and go over the bare aluminum gear. This quickly cleans off any debris and brings it right back to the original brushed-aluminum finish.

I recently finalized a big decision and ordered the single most expensive component in the SDX build: the engine! There are several good engine options available and I’m a firm believer that engine decision comes down to user preference. With that being said, the (now ordered!) engine that I feel makes sense for me and my mission with this aircraft is the 520T from ULPower, a 220-hp turbocharged six-cylinder.

The performance and reliability I have experienced with the ULPower 350iS on my Super701 (almost 700 hours now) definitely played a part in my decision. Adding to that, I had the opportunity to catch a ride in a 750 SD with the 200-hp 520iS several months ago and was immediately impressed with the engine’s smoothness and performance. I also looked closely at power-to-weight ratios for this plane, especially after building and flying the Super701, which has proven its amazing capability many times even though it is a non-modified airplane with off-the-shelf components.

With those thoughts in mind, I did some comparative figuring for the power-to-weight ratios of the Super701 versus the 750SDX. Putting the 200-hp 520iS engine in the 750SDX would have resulted in slightly less power per pound of aircraft weight than the Super701. That was just not acceptable for me, so I looked at the 520T, which is a turbo-normalized 220-hp engine. This combination gives the 750SDX a better power-to-weight than the Super701. Given that I have bucket-list plans for the 750SDX to travel out West, I did not want to limit my performance when I go hang out with my flying buddies at their higher altitude airports and off-airport strips.

For those who may not be familiar with ULPower, I highly suggest you give them a look. Alongside the reasons mentioned previously, there are several other factors that led me to my engine choice. Namely, the ULPower engines are direct-drive and air-cooled, keeping them simple with no need for extra gearboxes, water pumps and a whole bunch of other components, bearings, seals, etc., to make it all work. They are all fuel-injected and controlled by a full FADEC system, so they have full automatic mixture management—making them intrinsically altitude compensated. The engine controls required in the cockpit consist of simple start/kill switches and the throttle. The traditional knock on turbocharged engines is that they can be hard to manage. With its electronic controls, I expect the 520T to be just the opposite.

The charging system is integrated at the rear of the engine, eliminating the need for any drive belts or pulleys. The engines are a modular design, which makes individual components easy to maintain. It also makes this a “lifetime engine,” meaning that I could potentially use the same engine for many thousands of hours by replacing individual components as they wear out. So, for example, should a cylinder go soft, it’s a matter of replacing that cylinder instead of taking the whole engine apart. (And, yes, I know this is exactly how the legacy aircraft engines are assembled, for good reason.) In all, I like to think of the ULPower as a good investment. A quick note on air cooling: If you know me well, you know that we have used lots of big air-cooled diesel-powered equipment on our farm for decades with great success. I am partial to the simplicity and robustness of a well-designed air-cooled engine. Now, back to airplanes: The whole purpose of an airplane engine is to turn a big fan (the propeller) and move a lot of air. It just makes sense to utilize a very small fraction of this resulting airstream to cool the engine. Let’s face it, all airplanes have air-cooled engines. Some just have to go through an extra step and complexities to get there.

Back to the Now Unoccupied Workbench

My primary focus thus far has been the fuselage. Now that it is off the workbench, I can take advantage of the building table to work on other components. I had completed the horizontal stabilizer skeleton earlier, so the HT seemed like the next logical component to work on. This involved deburring and installing the skin, riveting and then storing it on the now-standing fuselage. Again, with Zenith Aircraft’s CNC final-hole-size, match-drilled technology, the horizontal stabilizer went together really smoothly. Once the completed horizontal stabilizer was resting on the fuselage, I mocked up the elevator skeleton.

I’ve noticed that I have a tendency to bounce among components a lot. For instance, I am just starting to lay out the pieces to mock up the right wing, but also working on the firewall and front gear, looking at the cabin area and contemplating the next steps for avionics, fuel systems and the general look that I want to achieve with this build. This includes the paint scheme and overall appearance, which I can begin to visualize on the large fuselage sides while I am working in the same space. To that end, I am working with a couple of artists to come up with a paint scheme design and graphics that will be unique to this airplane.

As the build progresses and I continue to think about the aircraft’s mission, which will also include lots of cross-country time, I have been contemplating an autopilot system. One system that I am very intrigued with is the autopilot from iLevil, which actuates trim tabs instead of the main control surfaces. This concept just makes sense to me, especially if I can use the existing factory trim tab on the elevator instead of adding an additional tab. I have reached out to iLevil and am impressed with the company’s responses to questions so far. For now, I’m moving the elevator skeleton off the workbench while I research, ponder and decide how to proceed with the autopilot system.

During a build, there are always going to be things you see that bring up different ideas you could potentially implement. Luckily for my time and wallet, there have been very few areas of this project that have changed as it comes together. My main idea, mission and modifications remain the same as my original concept for what I wanted from this aircraft.

On that note, I have been planning a simple instrument panel since the start of this build. While the panel in my Super701 is very clean, it is definitely overkill for the type of STOL flying that I usually do. It is my opinion that a STOL pilot needs to be looking out the window instead of at an instrument panel.

However, I still want the SDX to be a capable cross-country machine. Right now, I am considering a single Garmin EFIS (controlling everything else remotely) possibly mixed with a Vertical Power electronic circuit breaker system. Along with simplicity, my goal is to have a really clean look inside the cockpit. The instrument panel is still completely in the planning phase, but I hope to have some of the electronics finalized and ordered soon. I’ll go into more of this in the next article.

Videos of Humberd’s builds—and some of the fun that can be had with flying a STOL airplane—can be found at www.youtube.com/Super701.

Kitplanes - February 14, 2012
0
Missionary ZealI have been a KITPLANES® subscriber since its inception. Over the years I...