Most people recognize the title of this column as a line from a famous Christmas song. The next line is even better—something about finding out who’s been naughty and who’s been nice. This popped into my head this past week when I was doing a prebuy on an aircraft that had no entries in the logbook except for completing the annual condition inspection. The aircraft had been flying for over seven years, but had sat unused for the previous 12 months! So, I asked some questions about last year’s inspection, including inquiring if the wheel bearings had been repacked. The answer was no. I asked if during the life of the aircraft any maintenance had been done, such as replacing brake pads. The answer was yes. However, there were no entries for the brake pads or any other maintenance. 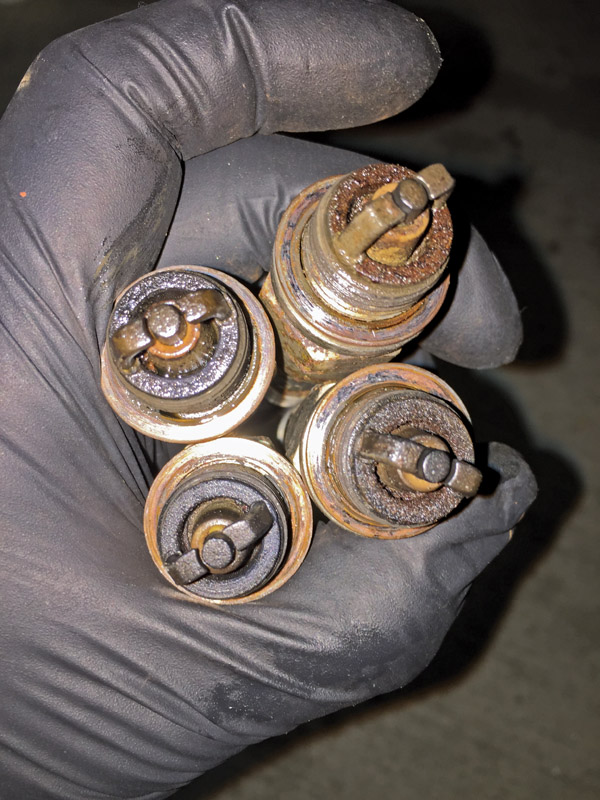 These plugs were removed from a non-flying aircraft that had the condition inspection signed off a year earlier. Clearly they were never cleaned, and it leaves in doubt the quality of the overall inspection.

Some will argue that there is no need for entries in the logbook. I might be inclined to agree if there was some other paperwork that could go along with the aircraft such as completed checklists that were used during the inspection. None existed in this case. Personally, I like to see documentation that regular maintenance items were completed, with things such as the oil sump screen checked and/or cleaned, and the manufacturer’s service bulletins complied with. On this same aircraft, all four spark plugs were oily and pretty full of lead. I’m pretty sure they didn’t get that way sitting for a year, so the only conclusion I could come to was that they weren’t cleaned at the last condition inspection. Hmm…I wonder what else wasn’t completed. I also found two loose jam nuts on the elevators, one of which had never been tightened as paint was between the jam nut and the spar, and some really horrible riveting on the forward attach point of the vertical fin. The riveting should have been caught on the initial airworthiness inspection, and the loose jam nuts should have been caught on the first preflight, not to mention the seven subsequent condition inspections and each preflight. It was becoming clear to me that this aircraft had been receiving “pencil” inspections, meaning signoffs in the logbook without really performing any inspections. It’s certainly not the first one I have seen this way, and unfortunately it probably won’t be the last. By the way, I declined to fly the aircraft due to reasonable doubt about the maintenance, and the operating limitations were nowhere to be found, so technically it wasn’t airworthy. Everything was fixable—but it clearly needed a thorough condition inspection. This certainly belongs in the area of naughty. 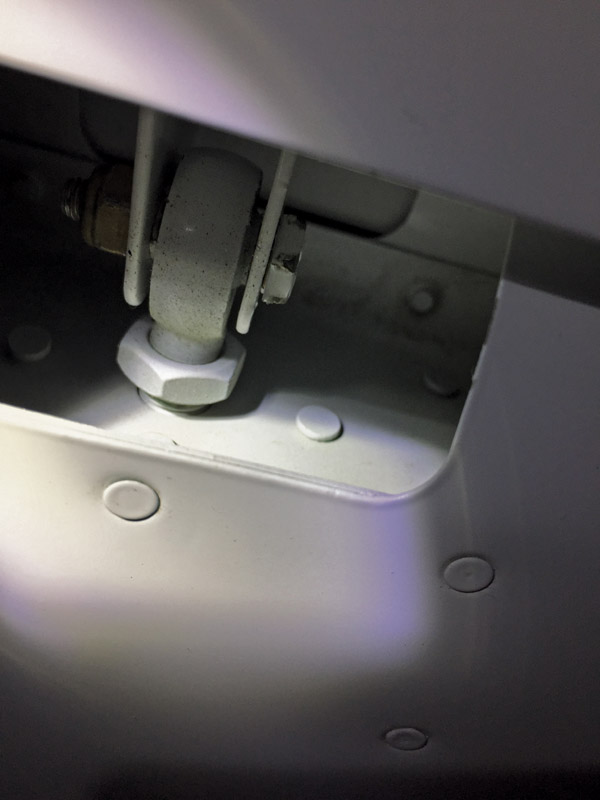 This jam nut was clearly never tightened, as there are no score marks on the spar and there is paint below the jam nut. This is on an aircraft that has been flying for seven years. Preflight anyone?

Another area I throw into the naughty category is non-compliance with the manufacturer’s service bulletins. During this same week I inspected another RV that had absolutely abysmal riveting on the aileron attach brackets. This is a critical area for which Van’s has put out a service bulletin. On this particular aircraft the condition inspection was signed off three months after the release of the service bulletin. An interesting note is that the service bulletin recommended the inspection of the said bracket should happen prior to further flight. I believe that even a novice riveter would be dismayed at the rivets shown in the picture. Naughty again.

A week prior to these two inspections, I inspected another RV-10 project that was advertised as 90% complete. It had been worked on for many years, then had been left sitting for many years and had collected a lot of dust and grime. However, once I started looking more closely at the construction, it became clear that I was going to be hard pressed to find a good rivet. The riveting throughout the entire project was so bad that it probably requires a complete teardown and rebuild. Quite honestly, the more I looked the more I was shocked. I couldn’t fathom in today’s environment, with all of the help available, that someone could or would continue to rivet without asking someone or at least doing some online research. It’s not like building an RV-10 is a small project. It is a huge project, and a very expensive one at that!

I remember how awful my first rivets were. I had no idea what I was doing, but I at least knew to ask the local flight school A&P. He laughed (really) and then proceeded to tell me how to do it right. The lesson is that we all had to learn. There is an old adage that asking for help is not a sign of weakness, but a sign of strength and humility. 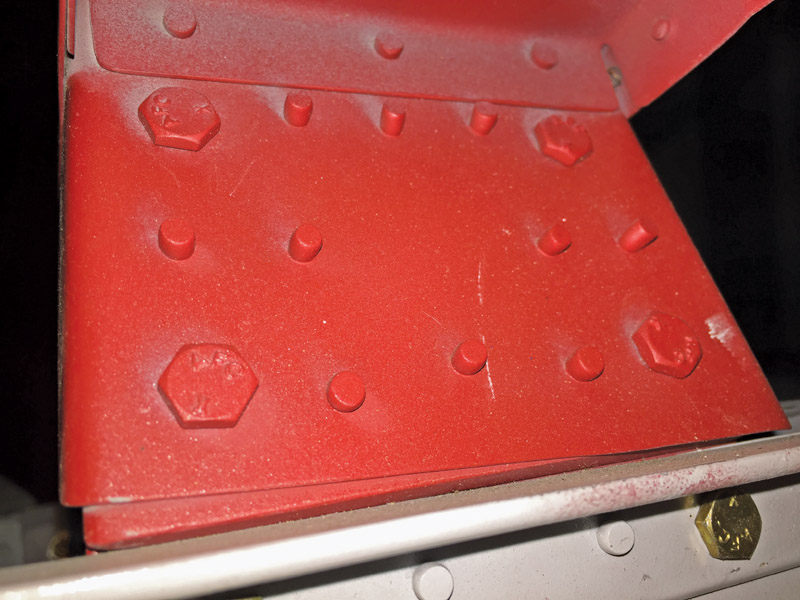 The riveting on this vertical fin certainly doesn’t meet standards. It should have been caught on the initial airworthiness inspection, not to mention the seven subsequent inspections by an A&P who was the second owner.

In the course of a technical counselor visit on an RV-8 that was under construction, I managed to discover two rows of missing rivets on both wings where the ribs attach to the spar. Needless to say, the builder was disappointed, but happy at the same time. See, the wings were off of the airplane and getting to those rivets now was going to be much easier than if they were attached to the fuselage, even though it did require removing the fuel tanks. This one I put into the nice category. The builder asked for a review—and that’s really the point I want to make for this column.

Some of our readers may already know this, but there was a time when the FAA actually required inspections prior to the closure of any subassemblies. I went through this process when I built my RV-4. In fact, I had to take the tail assembly to the local FSDO to accomplish the inspection. The inspector also made an entry in the logbook indicating the particular assembly was inspected. I think we should consider taking advantage of the EAA’s Technical Counselor program in the same way. 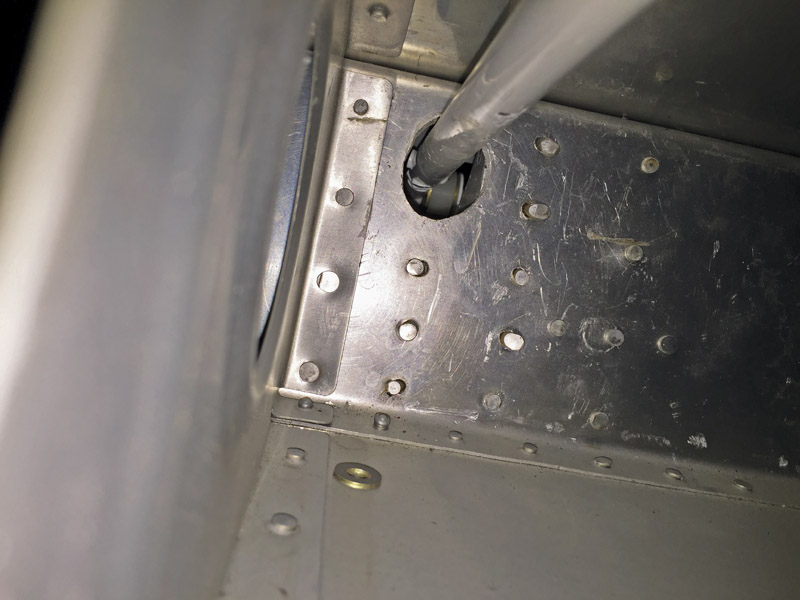 One can only imagine what prompted the builder to accept the riveting seen here. Three months prior to the last condition inspection of this aircraft, a service bulletin was released that recommended inspection of this critical area before the next flight.

It’s very easy for anyone to find the nearest technical counselor via the EAA’s website. I know as a DAR I find it refreshing to see that at least three visits have occurred by a tech counselor. These should include one during the initial build of the first kit, one before the closure of any subassemblies, and one after final assembly. I also recommend that you find a tech counselor that has seen more than one of the particular type of aircraft you are working on. It really takes experience to be able to identify problem areas or mistakes, and that only comes after reviewing many aircraft. As an example, if someone built just one aircraft and made a particular mistake that went unnoticed, there’s a good chance they won’t recognize the same mistake on your project. How many of us are guilty at looking at something and completely missing the problem? My wife, who is not a builder, pilot, or mechanic, will come out to the hangar to look over my own airplane when I happen to be working on it, and over the years she has managed to find some things I missed! A dose of humility every once in a while is good! 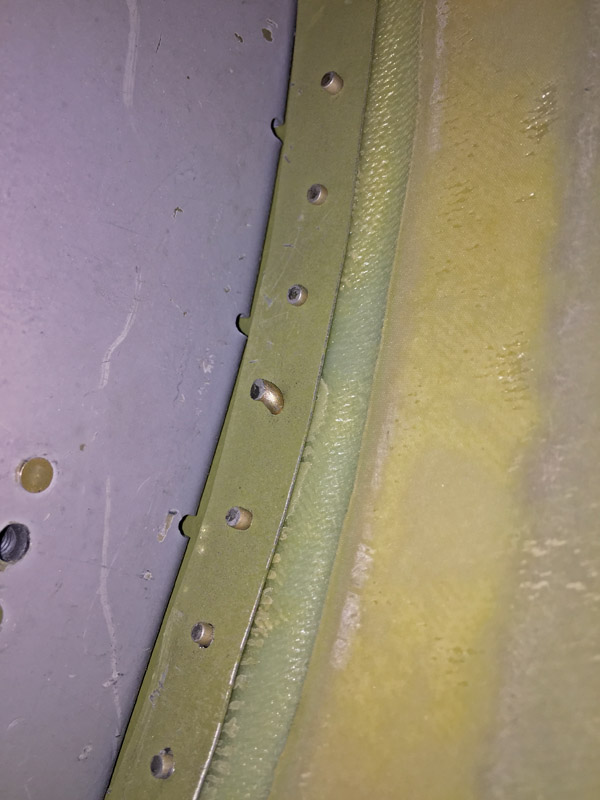 Two out of three might not be bad, to quote another song, but two out of seven definitely is naughty! This is a view of the riveting that was typical throughout the RV-10 mentioned in the column.

Coordinating schedules for tech counselor visits sometimes can be a real hassle, but with so much technology around us today, it is easy to find a solution. I find that Apple’s FaceTime app is a great tool to utilize when a builder needs a question answered immediately, especially since most shop time usually happens in the evenings or on weekends. A quick discussion can identify a need for correction or just a reassuring “looks good,” potentially preventing the continuance of an improper procedure, such as the bad riveting examples highlighted in this column.

After all, building our own airplanes is supposed to be fun. Building scrap is not.

Let’s see if we can get the technical counselors more involved in our projects as soon as possible, and hopefully within a year I can report back with some good results!

Mel Asberry - January 20, 2009
0
As a builder gets ready for his airworthiness inspection, he wonders if he can hire a DAR who is familiar with his design but lives in another state. And what if your airplane doesn't pass inspection?