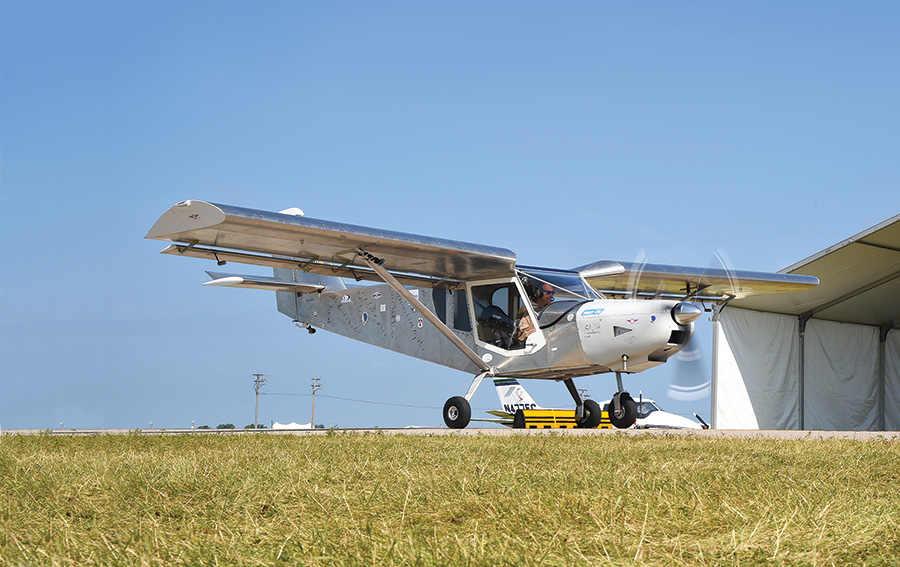 There’s little doubt that the two events that captured the most attention at AirVenture 2014 were the Thunderbirds and the One Week Wonder. The Air Force made a tremendous impact on attendance for the days they flew. The One Week Wonder brought the focus for EAA back to homebuilding this summer and served as a highlight in a week that was devoted to honoring the memory of Paul Poberezny. It put Experimental back into EAA. 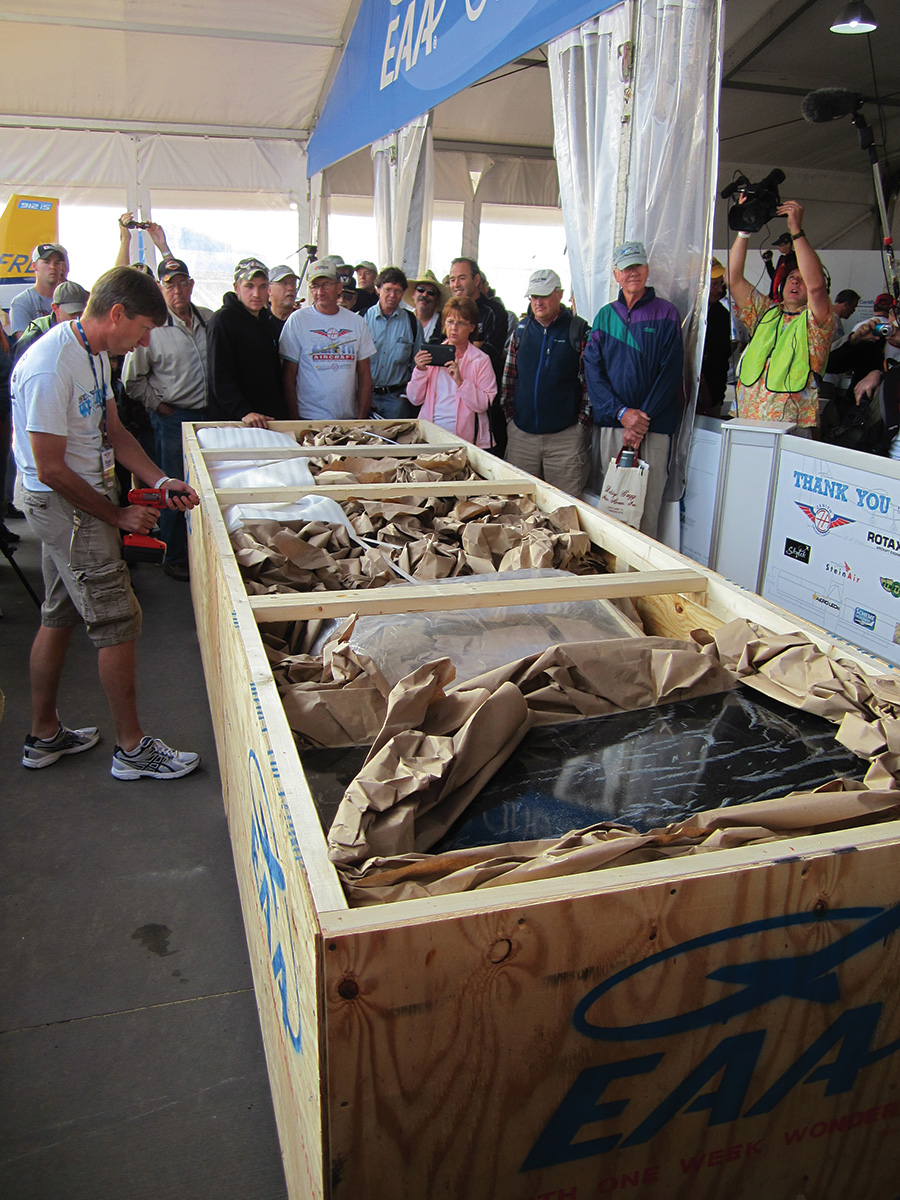 Day One, Zero Hour: The original airframe crate is opened up and the unpacking of parts begins.

Over 2,500 people participated in the construction of the Zenith CH 750 Cruzer that was selected for the program, and yes, they made it. The airplane was completed and taxied in seven days, and was flown two days later.

EAA deserves a lot of credit for hosting the OWW. They really gave it the kind of first class treatment that would have made Paul proud, setting up a large, clearly identifiable tent across from the Members Welcome Center, providing excellent construction tables, and putting up outstanding graphics that kept track of the progress. They wisely “fenced in” the construction area in a way that allowed hundreds of spectators to see virtually everything at one time. The crowd rarely dwindled to less than a hundred.

There were two lines of people patiently waiting for their chance to pull a rivet or two, and there were frequently over 50 people queued up. It did take some time to get through the line though no one cared. Everyone eventually walked over to the workbench, was handed a pneumatic rivet puller and then posed with the “gun” in hand while their photo was taken, after which they autographed the rivet(s) and then took the time to type in their email address so they could get a copy of their photo. Finally, they signed the construction log and received their One Week Wonder pin. Undoubtedly, if six volunteers had pulled all of the rivets, without the photos, email addresses and autographs, they might have finished the construction in six days or possibly even five. However, that wasn’t what the OWW was about. 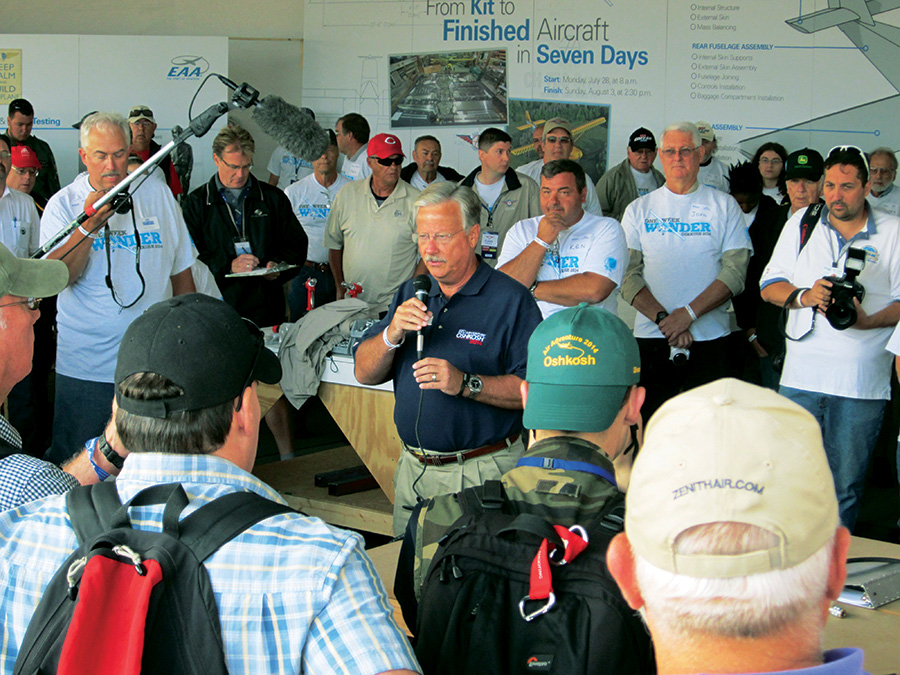 Jack Pelton, EAA Chairman of the Board, oversees the opening and unpacking of the crate after comments about the importance of the project.

The goal was to engage as many members of the public as possible. They did that. People from every state and probably over 75 countries pulled rivets. Young kids and aging grandparents did it. They all walked away with a smile on their face. Many felt they’d done something truly historic. For those who had never pulled a rivet, there was little doubt that they were impressed with how easy it is and how even pulling a single rivet generates a sense of accomplishment. They could all say: “I helped build an airplane.” There were quite a few who would have liked to stay and pull a hundred rivets. 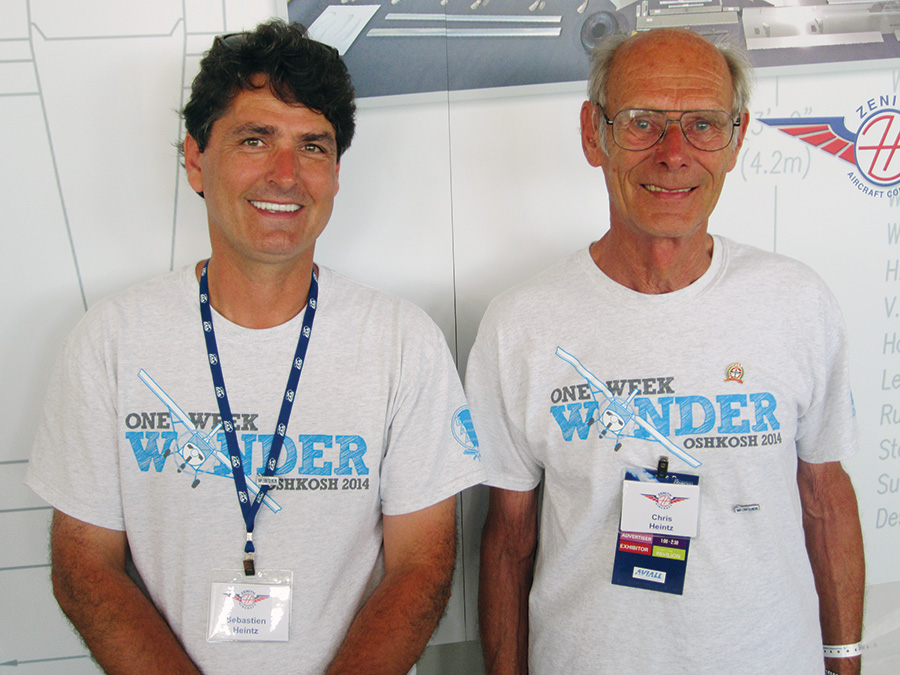 Zenith’s Sebastien Heintz and his father Chris, who designed the Cruzer. It is the third Zenith to be assembled in one week.

Vernon Maslow, age 20, from Cambridge, MN, had read about the project in this magazine and came to AirVenture knowing he wanted to participate. Asked what he was taking away from the experience, he replied: “It’s great to see so many people, so many younger people get involved in building. It piques their interest in aviation.” Brian Danzerzeur, 34, from the Netherlands, had read about the OWW on EAA’s web site and sought it out when he arrived. His reaction was echoed over and over: “It’s fun. I enjoyed doing it.” Nathan Koester, 17, from Illinois, had participated in the GAMA competition for high school students and then came to AirVenture. He said: “It was really easy to pull the rivet. It’s such a cool thing they’re doing here…getting so many people involved. It’s exciting.” Then there were Auburn and Abby Graves, ages 9 and 7, who each summarized it in one word: “Fun.” Kelley Leveaux, 17, from West Virginia, is already a student pilot and hopes to enlist and fly cargo in the Air Force before going to college. “Seeing everyone working together, building an airplane in seven days is amazing,” she said. “From my perspective it’s awesome.” 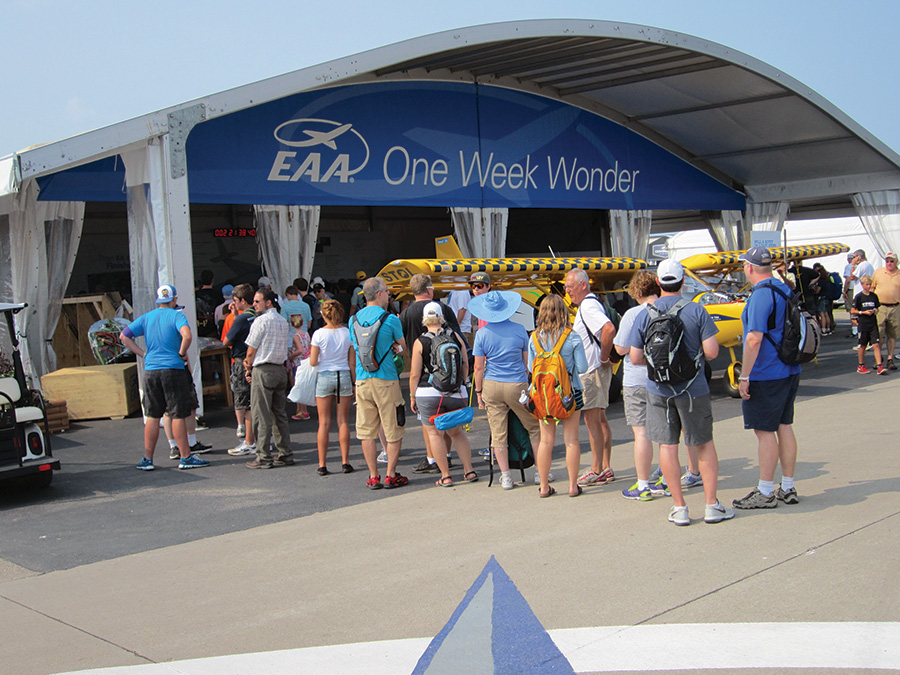 One of the two lines that formed with people wanting to pull a couple rivets in the historic project.

FAA Administrator Michael Huerta was all smiles as he got an explanation of the project from Caleb Gebhardt, the staff engineer at Zenith Aircraft Company. The smile was still there as he pulled a rivet and autographed his work. Audrey Poberezny stopped by and she pulled a rivet, stimulating all kinds of memories of her late husband’s work. Jack Pelton pulled one and quipped that if he’d seen this kind of efficiency on the production lines he controlled in the past, his companies would have made a much larger profit.

While chatter was a constant, and the sound of drills and rivet pullers kept up a constant din, there was no shouting, no hysteria, and no grumbling. The mood was almost festive, and though all of the workers were intensely focused, the assembly proceeded in a calm and orderly fashion. 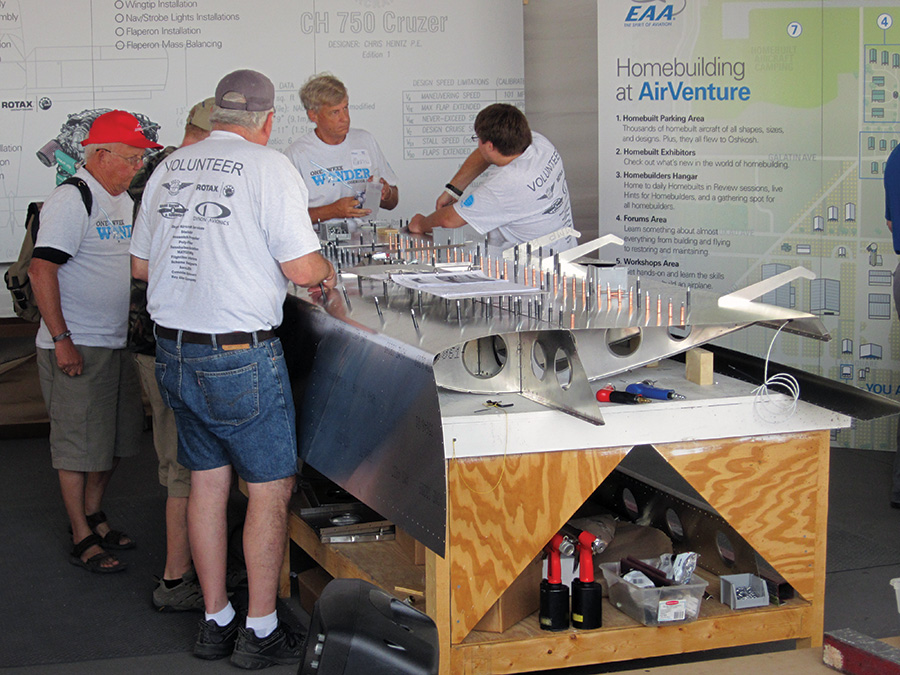 During the week, over 2500 people pulled rivets in the flying surfaces and fuselage.

One of the participants, who spent the entire week in the tent, seemed to enjoy watching the process as much as anyone. That was Chris Heintz. In 1976 he oversaw the construction of an earlier model Zenith at Oshkosh, and then in 1978 he did it again at Sun ‘n Fun. “What we built back then had a much smaller crew, and they were working with what was essentially a raw materials package,” he said. “It was a simpler design. The airplane we’re building now is much more complex, but the kit is much further along in preparation for a build than the kits we had 36 and 38 years ago.” Chris would know. He designed both aircraft. He noted that he had used a much smaller cadre of volunteers and had not invited the public in to pull rivets. 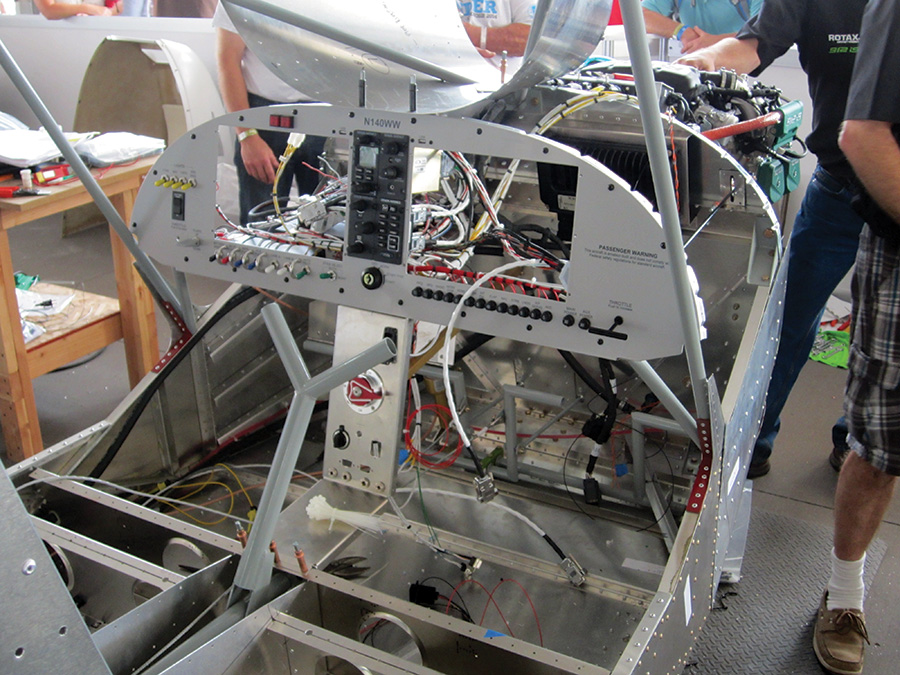 Change from 1976 was built into this year’s program from the start. The idea of engaging thousands of people in the construction dates back to a phone call that took place a year and a half before AirVenture 2014. It was between Charlie Becker and Sebastien Heintz. Charlie, who works directly with the homebuilding community at EAA, was calling Sebastien to discuss an issue related to the Zenith that was being built by the EAA staff. The conversation wandered a bit and got onto the subject of building an aircraft at AirVenture…in one week. Sebastien brought up what his father had done and offered a kit. Charlie accepted, not realizing what that decision would eventually cost him in sleepless nights. The EAA staff took nearly two years to assemble a CH 750 STOL, and even though the building was restricted to weekends, the amount of time that went into completion left Charlie wondering how in the world they could build the same airplane in only seven days. It did not seem possible. Sebastien Heintz, however, knew it could be done and worked with Charlie to organize the event. They appealed to a number of people who had already built a Zenith and set up a schedule where experienced builders would spend a day or two working on the critical parts of the assembly. 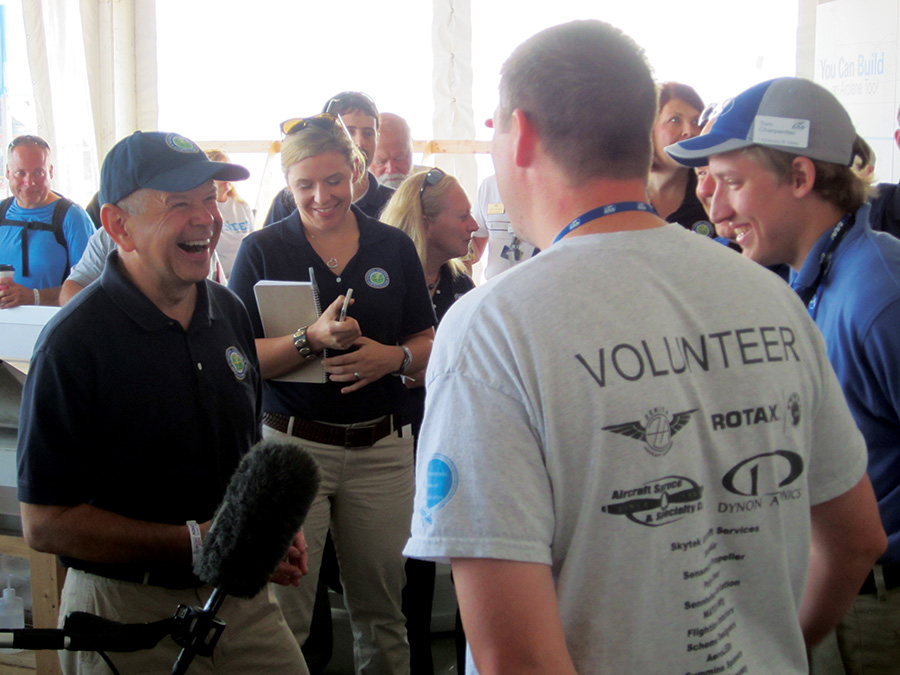 FAA Administrator Michael Huerta was all smiles as the project was explained by Caleb Gebhardt of Zenith Aircraft.

Aside from the rivet pullers and the people who supervised them, there were usually about 25 people working on the various systems in the aircraft and attaching components. They built up the fuselage, the panel, the fuel and electrical systems, and hung the gear, tail group, and wings. They knew how to read plans and follow instructions. There were several people from the factory present at all times to answer any questions that came up. The work progressed smoothly with the daily goals being met easily. So work ended every day at 5:30. The only problem arose on Saturday when the wings didn’t get attached as soon as anticipated, but they quickly made up for that lapse and on Sunday Charlie still had enough energy to hold up a Certificate of Airworthiness with a huge smile on his face. On Sunday afternoon, they pulled the airplane out to the flight line, fired up the engine and taxied it for all to see. Jeff Skiles then offered to make the first flight, and after a short transition training experience in another Cruzer, he took off on Tuesday, flew the pattern, and brought it back down safely. 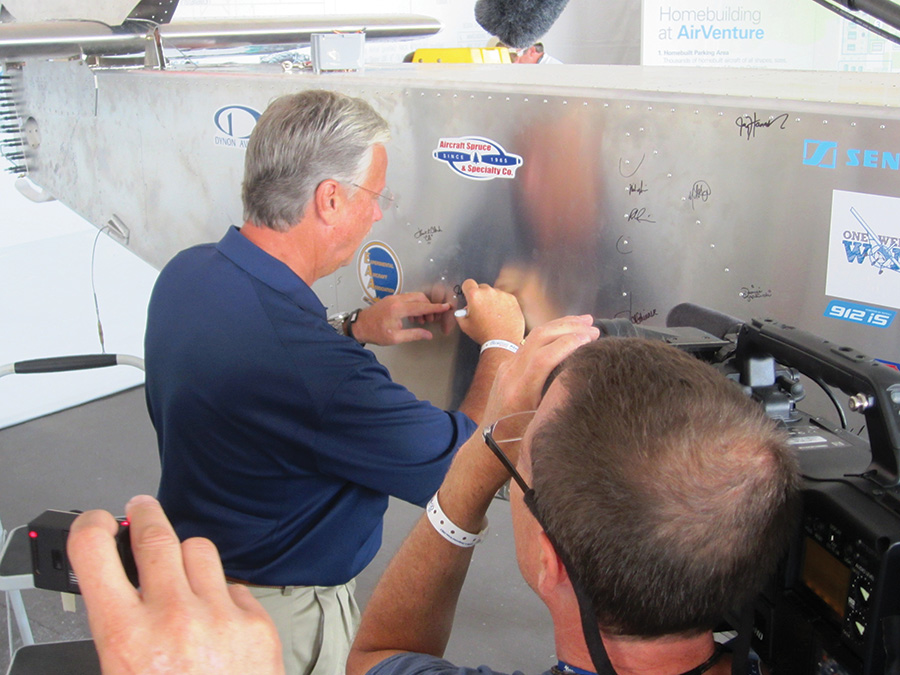 Jack Pelton joined thousands of others in autographing the rivets he pulled.

Sebastien was asked if he had met all his goals. “Yes. We got it done on time. We showed that it’s fun and exciting to build an airplane. People discovered that it’s relatively easy and that there aren’t any skill issues that can’t be overcome with a little training. I think that most people who came here and watched and participated realized that they can do this, too. They can build an airplane. It will take them more than a week, but they understand now that it’s a hobby, a form of recreation. It’s not a difficult project; it’s a rewarding and enjoyable one. The energy and enthusiasm here has been really cool. It’s infectious…in a really good way. We had many people who stopped by every day to see the progress and learn more about what was going into it. In the end, the project exceeded our expectations.” 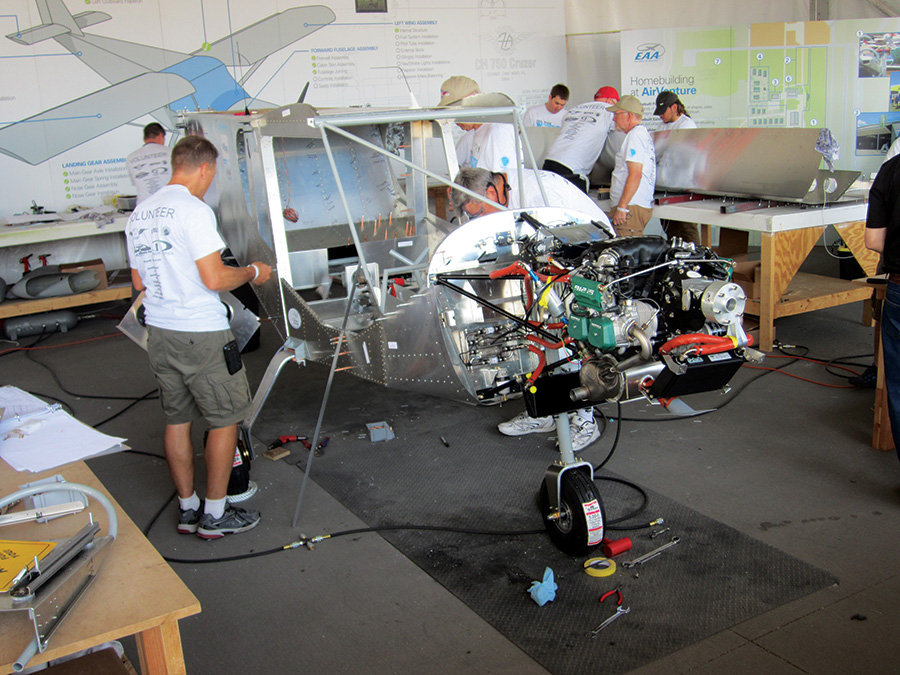 By Thursday the engine was bolted on and the fuselage was on its gear.

Up at Interview Circle, Charlie Becker said: “Most people build an airplane to have something to fly. That was not the goal of this project. We wanted to show people that the construction process is something they are capable of doing themselves. For a lot of people, a kit aircraft is something within their budget, and it’s an opportunity to get into all of the latest technology in construction, avionics and radios, often for a price that’s substantially lower than anything you can buy in the certificated world. 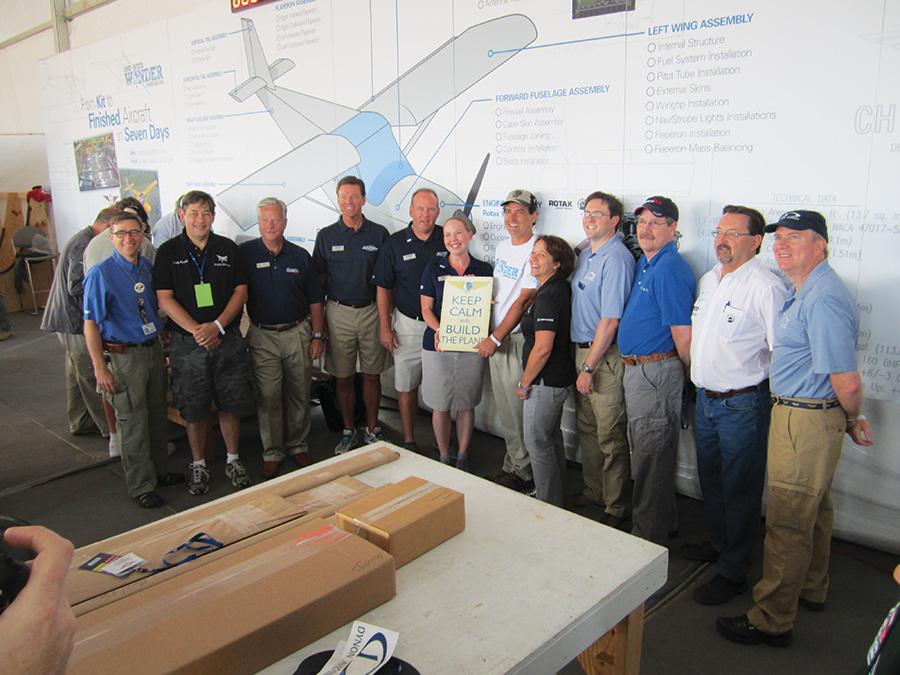 It took a lot of support from many generous sponsors to pull off the One Week Wonder. These are some of the sponsors.

“In the time since we announced the project, Rotax introduced their new 912iS Sport engine, and we now have one of those in the airplane. Dynon came out with their new touchscreen, and that’s in the panel. That panel is going to have synthetic vision, a touchcsreen, a built in G-meter, the engine’s got a single control for throttle. Carb heat and mixture are controlled by a computer. 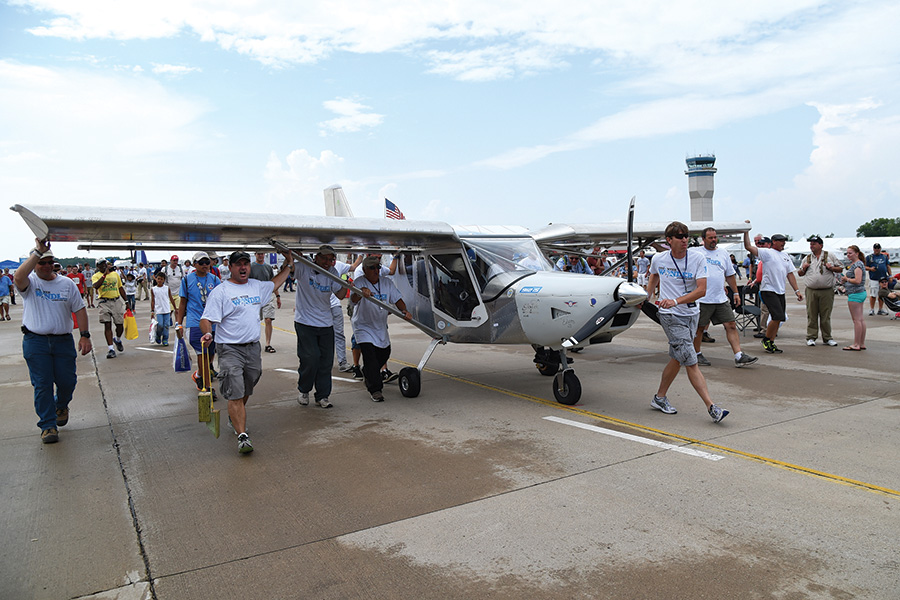 On Sunday, the aircraft was towed out to the taxiway, where the engine was run up. (Photo: Courtesy of EAA)

“EAA owns the airplane. Zenith gave us the kit, Rotax gave us an engine, Dynon contributed their remarkable EFIS, Aircraft Spruce provided a wide range of tools and promotion support, and other reputable firms donated everything from upholstery, to paint. Our objective now is to take the aircraft around the country to other fly-ins, EAA Chapter events, and make it a star at the next AirVenture. Then, in two or three years, we’ll look seriously at doing it all over again.”

In all respects the One Week Wonder was, in a word, “Wonderful.” 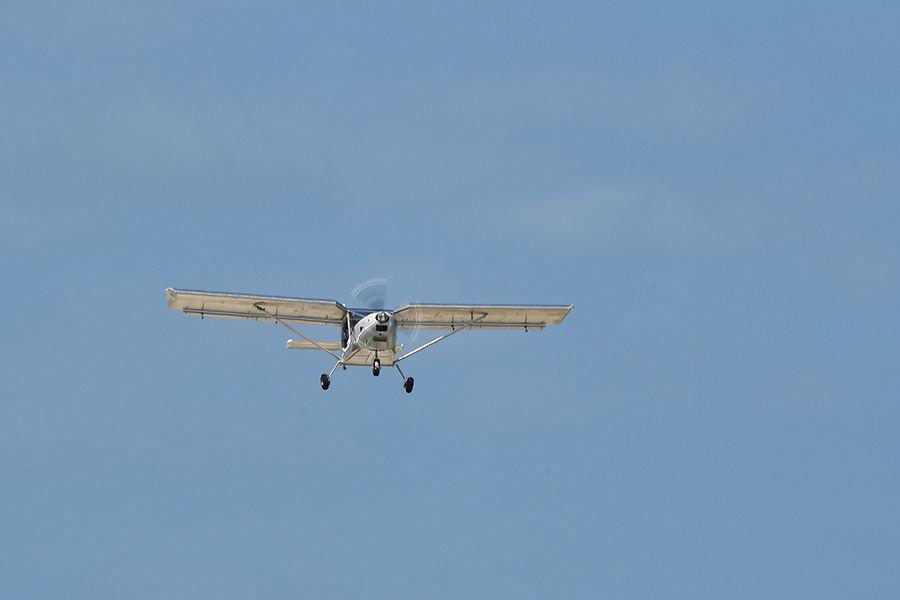 After final inspections, Jeff Skiles took off, flew around the patch, and came back for a smooth landing. (Photo: Courtesy of EAA)