On a trip to Alaska that includes over 50 hours of flying, consuming 700+ gallons of fuel, and covering almost 9000 miles, there is going to be some decision-making that is probably out of the realm of your normal flying. And it needs to start long before the prop is turned for that first leg. A trip of this magnitude will present many opportunities to challenge your flying skills, your aircraft, and your decision-making ability. 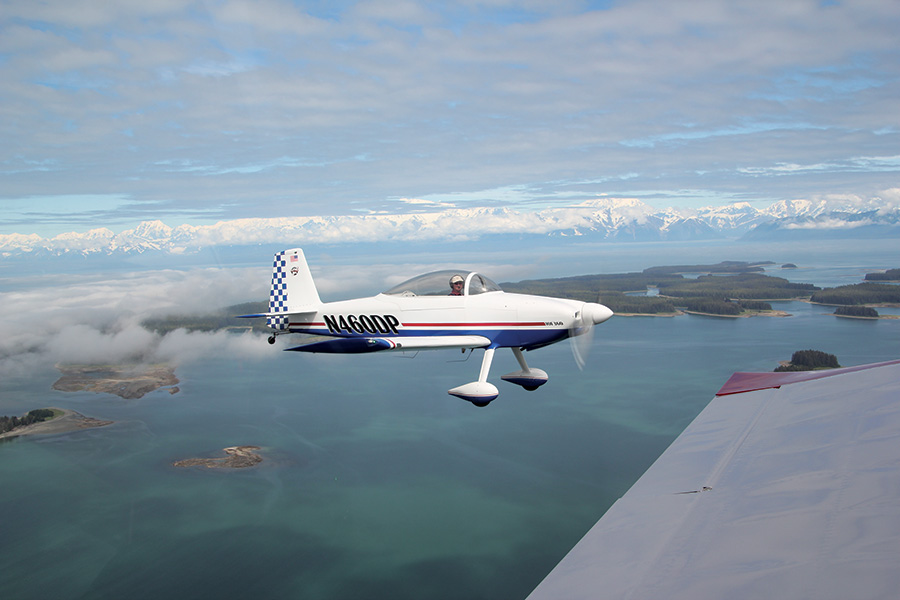 Here you can see the coastal fog and the clouds obscuring the mountains, as well as our friend, Dane Patterson, in his RV-8. It’s best to follow the coast here, and it’s very scenic as well.

As with most aspects of flying, it starts with attitude, and I can’t emphasize this enough. Start planning your trip way in advance. Even a year ahead is not too far. Alaska is really large-if split into two states, Texas would be the third-largest state (sorry Texans). That means there is a lot to see and do across a very large piece of geography. I think there are about seven different weather patterns in Alaska, so just because it is bad in one area doesn’t mean the whole state is toast. But do accept the fact that you may not be able to execute your trip exactly as planned and exactly on schedule. Go with a mindset that you are on vacation, plan for some options, and don’t set a rigid schedule. There is plenty to do on the ground, from fishing, to hunting, to walking on glaciers (which is way cool, no pun intended). I know pilots who paid the ultimate price for trying to adhere to schedules. If it takes three days for the weather to clear, just be patient and wait. I assure you that when it does clear the scenery will have made the wait worthwhile! 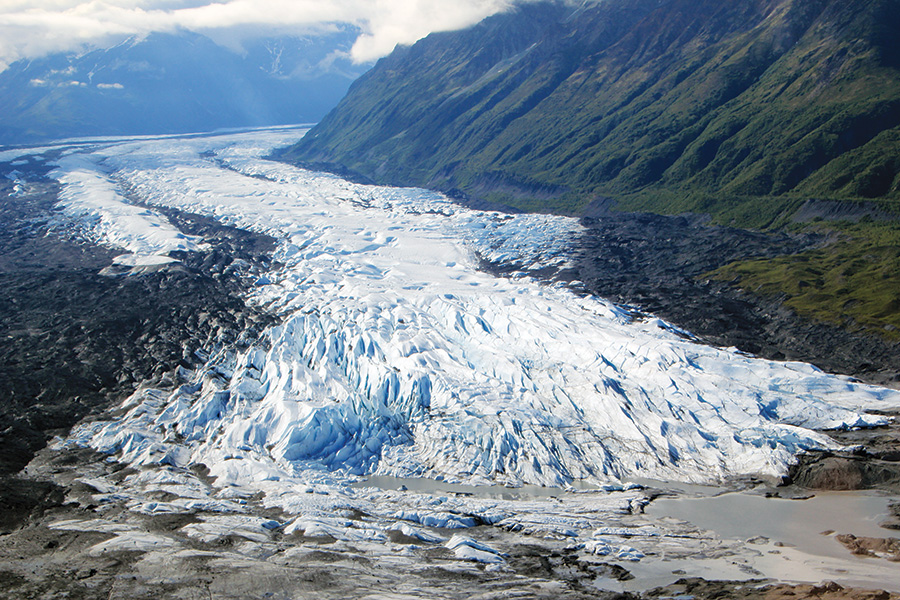 This is the Matanuska glacier on the way to the Copper River Valley. This is an accessible glacier that you can walk on.

On our way back this year through Yakutat, I spoke to a pilot who had been stuck there for three days, as he was flying VFR up the coast. His words: “We’re having a blast fishing!” I bet he will be flying a very long time.

There are three primary routes into Alaska from the lower 48. One choice is to start with the Alaskan Highway at Dawson Creek in British Columbia, and follow it all the way to Delta Junction, AK, which is about 100 miles from Fairbanks. The road actually continues all the way to Fairbanks, but Delta Junction is the official end of the Highway. Another choice is to fly up the Frasier River Valley through Prince George and Whitehorse, eventually picking up the Alaskan Highway at Watson Lake. This route is known as the Trench. The third route is directly up the west coast through Ketchikan, Yakutat, Prince William Sound, and into Anchorage. One of these routes will usually present a VFR option; however, the distances between the routes vary and can add quite a bit of time to the trip. 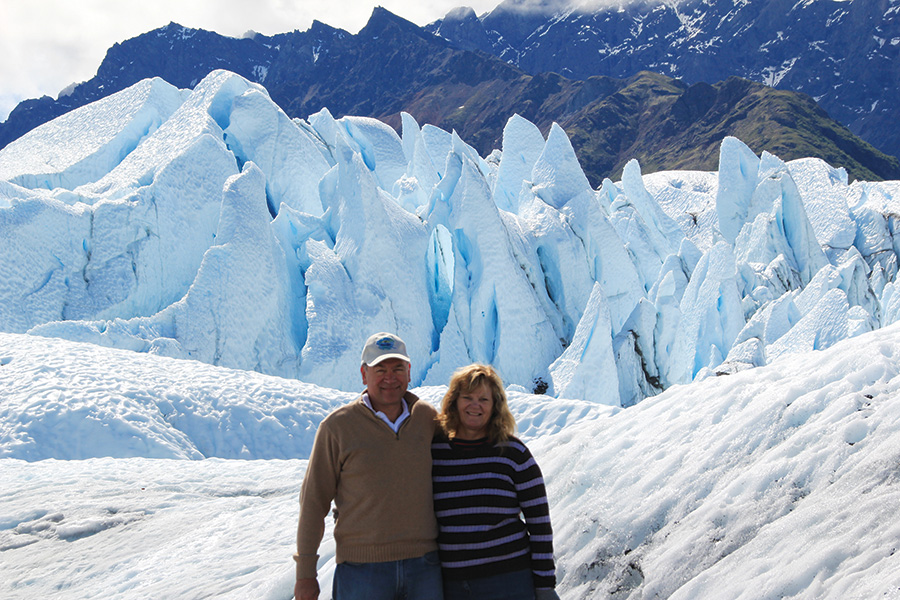 The author and wife Carol on the Matanuska Glacier, which is about a two-hour drive from Anchorage.

Speaking of VFR, understand that weather reporting is few and far between. Sometimes you can fly for hours and see absolutely no sign of civilization. That’s part of the beauty and also becomes part of the risk. You may have just flown two hours towards your destination, only to realize the pass is closed or an unreported local weather phenomenon exists. The only option is to turn around and go back two hours. I always fly with completely full fuel tanks (mains and tips) while in Alaska no matter what the forecast is. And I fly at a little reduced power settings for two reasons: first to enjoy the scenery, and second to extend the range a little if needed. It takes the pressure off from getting boxed into bad decision-making.

Another observation that I have had in Alaska with regards to the weather is that the reporting appears to be a little optimistic; I’m sure it has to do with the varying local conditions that are constantly changing. Alaska runs on aviation, as many of the communities are only accessible via airplane. I have seen the seasoned, local pilots fly in conditions that are much below my minimums, but that is only due to my inexperience in Alaska. As an example, MVFR (Marginal Visual Flight Rules) down in the lower 48, especially in the flat areas, is really not all that difficult. In Alaska, with very steep hills around that you most likely cannot outclimb, MVFR takes on a whole new meaning. It is for this reason that you shouldn’t go to Alaska without an instrument rating and some proficiency in instrument flying. It can be done completely VFR, but IFR will give you some more options, albeit limited due to lower icing levels and higher MEAs (Minimum Enroute Altitude). 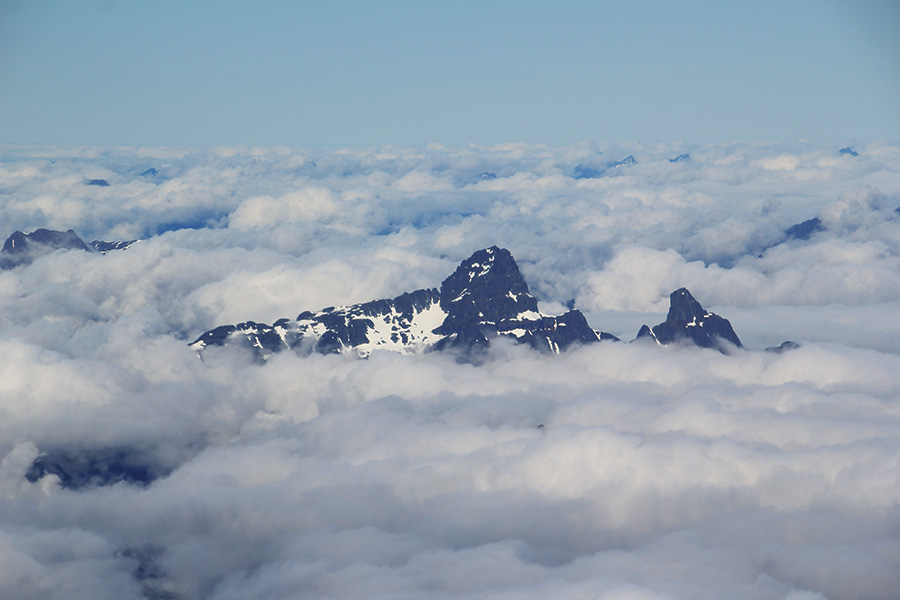 Here’s the proverbial granite cumulus and the reason for the higher MEAs.

I have found that there are two limits to IFR flying in Alaska: icing and range. The freezing levels are much lower, even in the middle of July. On this last trip we were getting ice at 8000 feet. The forecast levels were for icing between 9000 and 10,000 feet. I filed for 6000, was assigned 8000, and started picking up ice fairly quickly. We received clearance for a lower altitude and were ice-free for the remainder of the trip. By the way, we were glued to the OAT gauge, and at “0,” the ice started. I first noticed a 12-knot decrease in airspeed about the same time Carol noticed ice on the wings and tail. I radioed back to our friends in the RV-8, and he mentioned he thought he could see the tops, so he asked for 10,000 feet, as his OAT was reading higher.

Remember I said to make sure your OAT was accurate before you left? As it turned out, as the tops were, in fact, higher, the ice was worse, and for some reason, Center would not allow lower. In many areas radar coverage and radio communications have large gaps. I know some pilots may disagree with me on this point, but I never go higher when picking up ice, especially clear ice as we were seeing here. I will ask for a block altitude beforehand, so I can have some form of control. In this case, I had filed for the alternate airway, which was out over the water a little farther, but had much lower MEAs if needed. It worked! 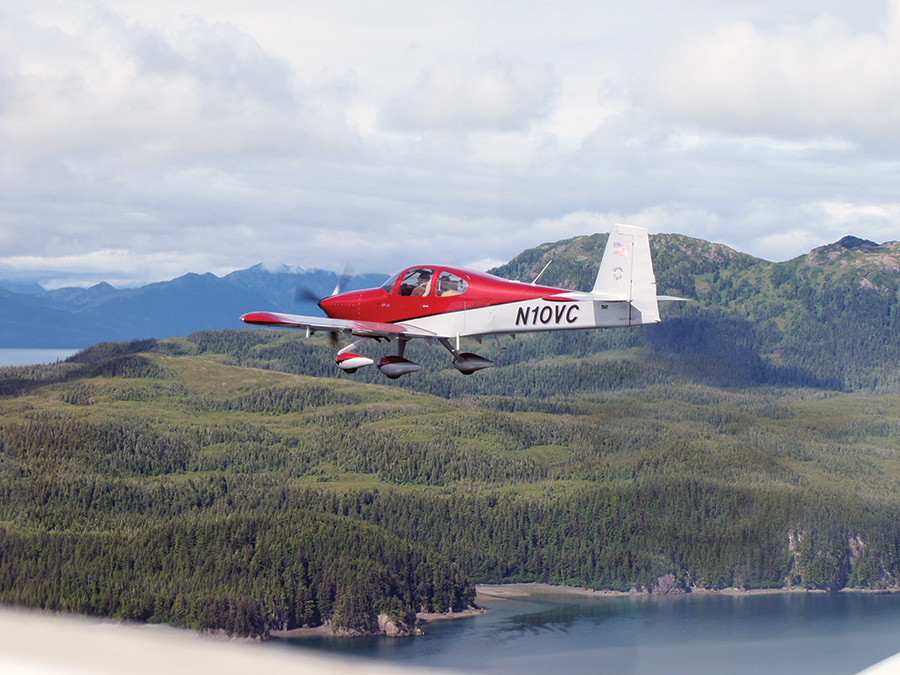 While traveling low up the inland waterways, we communicated with many seaplane pilots who were always willing to give weather reports and advice. The ADSB worked wonderfully for both traffic and weather.

Also remember I said to plan for options? I knew the MEAs were getting higher as we headed north towards Anchorage, and the freezing levels were coming down. We needed a Plan B if we wanted to get to Anchorage. Luckily, just south of Prince William Sound, there sits a neat little sea-level airport in Cordova, AK called Mudhole, and they have an ILS lined up perfectly with our route track. I requested and received clearance for the ILS. We broke out at 3300 feet into the beautiful sight of Prince William Sound. Again I radioed back to our friends in the RV-8, and they executed the same approach. What was really cool is that we were both able to watch each other on the ADS-B, and the join-up was very quick and easy, keeping 500 feet vertical separation until we spotted each other, and then it was a beautiful flight VFR up through Whittier and into Anchorage. 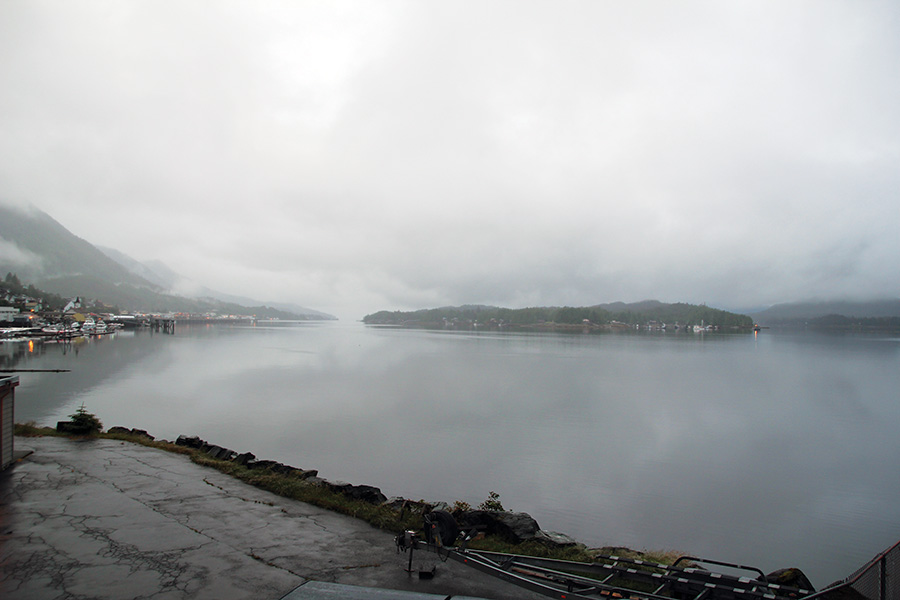 After landing at Ketchikan in low minimums, we decided to forego the next leg to Juneau and overnighted in Ketchikan.

There is one other area that will put even your VFR piloting skills to the ultimate test, and that comes from the fires that can be so prevalent throughout Alaska and Canada during the summertime. And just like weather reporting, many of them are unreported. Lightning causes most of these fires, and in many areas the timber is dead and dried from bug infestation. Consequently, these are really huge fires, and the smoke can deteriorate the visibility to nil rather quickly. It is definitely safer to go around. Remember that extra fuel?

One other lesson I’ve learned on these trips is that sometimes innocent-looking rain showers have hail in them. There isn’t as much energy to create the huge cumulonimbus clouds we have in the lower 48, but again, the freezing levels are lower. A number of us went directly through one of these rain showers that you could completely see through to the other side and ended up with hail damage on the wing leading edges and propellers. 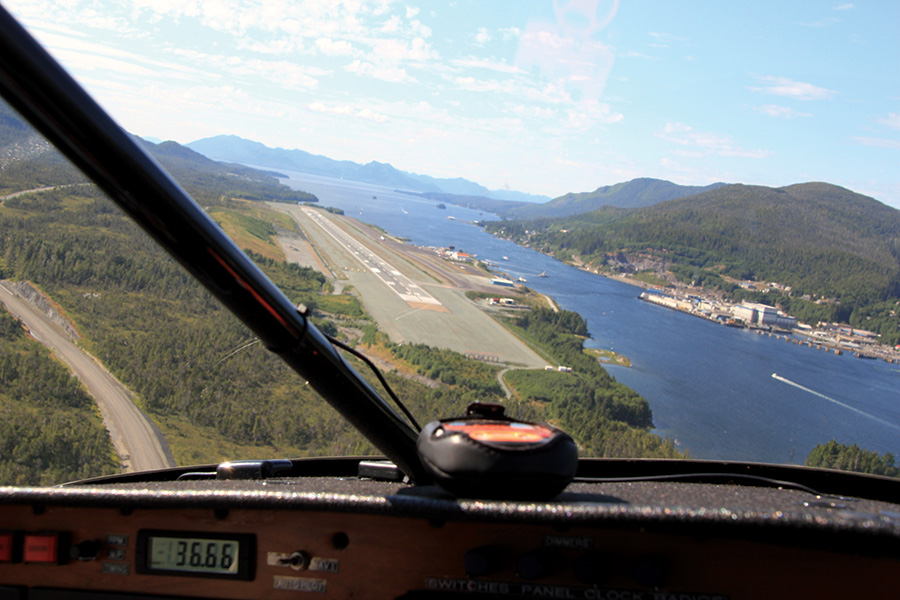 One week later it was a most enjoyable VFR approach into Ketchikan. Notice the SPOT resting on the instrument panel.

With regards to safety, there’s no doubt that flying in Alaska is a lot more risky than most of the lower 48. I take survival gear for two and carry a SPOT (Satellite Personal Tracker). I would certainly recommend that everyone at least carry some sort of personal locator beacon. I don’t take firearms in case we need to divert through Canada, as some extra Customs procedures are necessary there-but I was second guessing my decision when we saw the big brown bear run right across our path as we were flying down the Alaskan coast!

On this latest trip I mounted three hi-definition cameras under the wings, and we took almost 3000 pictures from the cockpit. We will get to enjoy the trip many more times while at home. As I have said before, the scenery is breathtaking. Much like the Grand Canyon, I have yet to see a camera do either of them justice. If you have ever dreamed of flying your airplane to Alaska, especially the aircraft you have built, I would encourage you to do it. You will have a lifetime of memories and stories to tell. 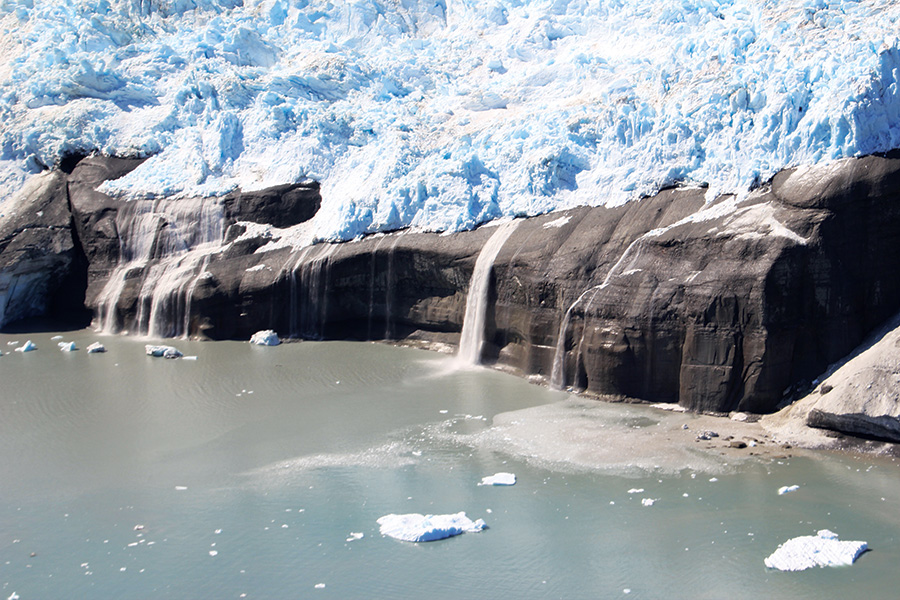 Guyot Glacier in Icy Bay. The sheer beauty is almost indescribable. And you can only see it by airplane or helicopter! 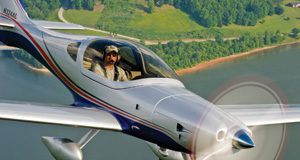