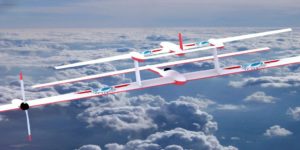 Chip Yates, a championship motorcycle racer and winner of the 2011 Pikes Peak Hill Climb on a 258-horsepower electric motorcycle, is planning on making it into the record books again, only this time airborne.

Last week, his Flight of the Century organization announced plans to “design, build, and fly an all-electric aircraft from New York to Paris along the same 3600-mile historic route pioneered by Charles Lindbergh in 1927.”

CEO Yates wants to retain some of the constraints Lindbergh faced: keeping the same route, flying at the same altitudes (or lower), and at the same speed or better achieved by The Spirit of St. Louis: 108 mph.

He’ll do this in a manned, all-electric airplane using no fossil fuels, and emulating the style of flight that got Lindbergh to Paris.  Roosevelt Field no longer exists, so an airport farther from Paris in the New York area will be substituted.  The airplane will never exceed 10,000 feet to avoid taking advantage of the jet stream.

The flight will be nonstop, but will take advantage of something Lindbergh didn’t have—aerial refueling, or in this case, recharging.  The 100-foot span “mother ship” will be served by unmanned aerial vehicles that will either swap batteries during the flight, or recharge on-board batteries, depending on the scenario.

According to FOTC’s press release, its engineers have filed a worldwide patent, “that enables electric aircraft to remain aloft indefinitely by docking with flying UAV battery pods.”

FOTC engineers are using a software tool “based on NASA’s OTIS4 Software (Optimal Trajectories by Implicit Simulation) that in-house flight engineers are using to identify ideal locations along the Lindbergh route from which to launch and recover a series of flying supplemental UAV battery pods to recharge the all-electric transatlantic aircraft during the nonstop flight. One transatlantic scenario involves the use of five strategically launched and recovered UAV battery packs.

Yates explains, “Our purpose in setting out on this very difficult path is to force innovation that drives electric flight technology forward in a significant and measurable way. You could fly this route today in an unmanned solar craft at 80,000 feet being blown over there by the jet stream, or in something incredibly slow, or in a balloon, but that doesn’t get our society any closer to realizing long-range, legitimate-payload, electric flight capabilities that everybody can actually benefit from.”

As a warm-up, the team is readying its 258-horsepower Long-ESA (Electric Speed & Altitude) craft, a converted Rutan-designed Long-EZ, which will help them develop battery systems for the big trip, and attempt altitude and speed records in manned electric flight categories. We’ll be following this exciting project, and will keep you up to date on its progress.

Ed Kolano - August 16, 2008
0
In typical fashion, Vans Aircraft refused to rest on its laurels after the RV-12s prototype debut last year, and sought to improve on an already good design. The new production airplane has changed (beyond its color), with a castering nosewheel, toe brakes instead of a grip, reshaped control sticks for better clearance, ground-adjustable seats fore and aft as well as in tilt, and the list goes on. Best of all, this day/VFR machine is still a delight to fly; by Ed Kolano.